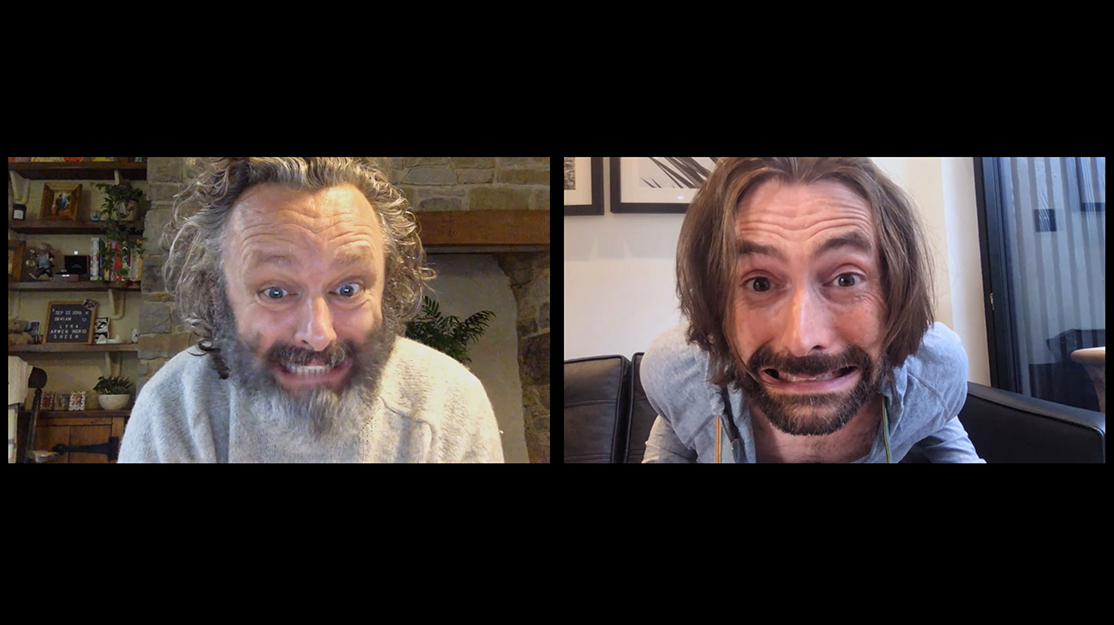 As the world went into lockdown last spring in a bid to stem the rise of Covid-19, resourceful and innovative television creatives overcame social distancing and filming on mobile phones to record some of the unique stories that continue to emerge from life during a global pandemic.

One series, however, has broken free from the circumstances of its creation to return for a second season. Staged retains its video call format to continue the story of actors David Tennant and Michael Sheen, both playing heightened versions of themselves, who are stuck in limbo when the West End play they are due to star in is put on hold because of the pandemic, leading director Simon Evans (also playing himself) to take charge of online rehearsals.

Though drama production had largely resumed last autumn, albeit with additional health and safety precautions, the creative team behind Staged rejected the temptation to tinker with the show’s winning format, as the now-familiar Zoom conference set-up allowed viewers to tap directly into Good Omens co-stars Tennant and Sheen’s infectious chemistry.

“In terms of the tech, it’s pretty much the same thing,” says co-creator and director Evans of season two. “We’ve tried to be as ambitious as we can, but it’s still very much David and Michael navigating treacherous waters.”

“We wanted it to feel the same and just because we could have had maybe slightly better equipment or slightly more people involved, that wouldn’t have been the same show,” continues Georgia Tennant, who is David’s wife both on and off-screen and also a producer on the series. “It would have complicated things. And by that point, having done one season, we were all slightly better at the tech than we were the first time around. We probably felt slightly more confident with it.”

In season two, the show travels across the Atlantic to introduce new character Tom, the assistant of David and Michael’s agent, played by Ben Schwartz. Tennant also promises more surprise guest stars logging into the series, following in the footsteps of actors such as Judi Dench and Samuel L Jackson who dialled into the first season. Throughout, however, the series is rooted in its ambition to mirror real life.

“We’re still in that kind of weird, ‘We’re still sort of in lockdown’ period and everyone’s a bit confused about what the rules are,” Tennant says. “Then you think you’re about to do something and then you realise you’re not allowed to do it anymore. It’s them stumbling, trying to find that new normal and trying to get back to doing what they love to do, but not really being allowed to do that.”

As such, season one saw Michael and David put on furlough from the play they were supposed to be starring in. Season two sees David desperate to return to work, while Michael is keen to escape South Wales for pastures further afield.

“In season one, their egos were the big friction points,” Evans explains. “Whereas in season two, they are coming to it from different desires. The things they spark off each other about are more things I hope people will identify with. Even if they’re not actors and aren’t in a mad rush to travel internationally, there’s still a desire to get back to work and to feel like you have value again and to just see something other than the four walls that you’ve been trapped in for the last million years.”

As for acting on screen, Tennant jokes that everyone felt like they knew what they were doing this time around.

“Practically, it is just a tripod. We’ve gone through three of them now because they just keep breaking. We’re on our fourth one and an iPhone. That’s it,” she says of filming the relatively few scenes with her and David that don’t take place on Zoom. “We have very limited time in which we can film things where there aren’t children in the room, someone’s doing homework or someone has to be put to bed so we get a scene and then we go, ‘Have we got 15 minutes where we can film this?’ It’s still chaos but the whole experience has been really fun.”

BBC1 first announced Staged, which is produced by Infinity Hill, GCB Films and No Mystery, last May. The shortform series, comprising episodes of around 15 minutes, debuted in June and was then renewed for an expanded eight-part second season in October. Co-creator and producer Phin Glynn says the broadcaster was the first to ask whether the show could continue beyond its first six episodes, and was greeted with a resounding yes.

“We could probably do this once or twice a year until we all die,” he admits. “With season two, it was a question of, ‘Are you going to make more?’ and ‘Is there going to be an opportunity to do that before the real world takes over?’ It ended up being that both David and Michael and everyone else had a window [to film it]. It was quite funny because we’d keep checking in with each other and it would always be, ‘Should we do this?’ right up until the point we were filming it. I don’t think there was any one moment where we planted the flag in the ground and said, ‘Season two.’ At least, that was my experience of it.”

“We could keep making this ad infinitum but it’s Zoom and there is a shelf-life of shows based on this,” Evans notes. “As soon as we are allowed to be free of this [pandemic] and go back to meeting in person, the tolerance for shows that are filmed like this will fall. I had a slightly contrary feeling where I thought, ‘I hope the world has returned to normal soon enough that there won’t be a season three.’”

Initially fearful that viewers suffering from Zoom fatigue might be put off watching Staged, they found the combination of David and Georgia Tennant, Michael, Michael’s partner Anna Lundberg, Evans and his sister Lucy Eaton proved to be an “intoxicating” combination side by side, with a star-studded roster of guest actors providing additional support.

Evans, a theatre director doing his first television project, hadn’t met David and Michael before writing the pilot episode, creating their ‘characters’ based off a phone call and clips of chat show appearances they had both made. But of the actors playing heightened versions of themselves, he says they are both “good sports.”

“A lovely moment was when I wrote the Sam [Jackson] episode and I realised I didn’t know that Michael and Sam had worked together before,” he remembers. “I wrote a line that Sam didn’t remember Michael, and usually I would send in the scripts to Michael and David at exactly the same time. But I sent it to Michael first just to go, ‘Is this okay?’ And Michael said, ‘Absolutely.’ They’ve always said to me, the more pathetic I make them, the funnier they find it.”

Tennant adds: “I didn’t think I had a line [that couldn’t be crossed] until I saw a scene the other day, which I realised had been filmed inside our wardrobe. As I watched it, I went, ‘I cannot believe you filmed inside it. If I had known about that, that would not have happened.’ That’s my line – and it’s in season two now.”

From a producer’s perspective, Glynn jokes that making the series is “really quite simple,” with no issues such as international travel to worry about.

“One of the flexibilities we have is if there’s something that’s not quite right, you don’t have to get an entire crew back and find time [to do a reshoot],” he says. “It’s a bit like the documentary process of editing is writing. That’s very freeing, because you don’t have to worry about what you’ve shot is all you’ve got. That’s a very nice change.”

One challenge was writing the series while filming, with some days where Evans would be writing, filming and editing multiple episodes at once, but casting the guest stars for season two was easier as they could now see the first season and making an appearance only required a three-hour period in their own living room.

Working at home with her husband was fun for Tennant, as the pair had vowed to work together again ever since they first met on the set of 2008 Doctor Who episode The Doctor’s Daughter, back when David played the Timelord.

“It’s just chaos, but it’s something to do!” she says, “especially season one as we were in deep with home schooling, which is about the worst experience of my life. So, to have something that meant I had to go to work was great. It’s really fun working with David – I hadn’t really done it since we first got together and we’d always been a bit precious about it, like ‘We don’t want to do that, we don’t want to impinge on our private life,’ and now it’s like, ‘Come into my cupboard.’ So, all bets are off, and it’s really fun. Ultimately, that was what I took away from it. We should have done it years ago. It’s been lovely.”

During filming, Evans says the first few takes of a scene can be “pretty disciplined,” before Michael and David might head off on an unscripted tangent. But there is always a script, with Evans never simply turning up and asking them to discuss cooking, for example.

“The lovely thing about filming as we were going while I was still writing, in both seasons, was they do have such a wonderful rapport with each other,” the director says. “When we cut and while we’re labelling files – because they’ve got to do it too – they’re chatting back and forth and I’m scribbling things down they’re saying that’s fun. So a lot of the later scenes were not improvised, but they did come from their natural rapport.”

With distributor Rainmaker Content shopping the series to international buyers such as Netflix, Hulu and Australia’s ABC, Glynn believes Staged resonates with audiences because viewers could see actors who were struggling with the same circumstances as them.

“It’s also funny and during this time laughter has been so important,” Tennant says. “The first season came out in a moment where everyone just needed to laugh and even though you were watching something that was mirroring the world you were living in, having 15 minutes where you could just laugh at something was a tonic that people needed more than they thought they did.”

Though Staged wasn’t the first ‘lockdown series’ to air, the show certainly differs in theme and tone from some of the other series produced during the first wave of restrictions last spring and continues in that vein in season two, which launched on BBC1 on Monday.

“They were sentimental melodramas that said, ‘Isn’t this experience we’re all going through quite harrowing?’” notes Evans. “Of course it was. But we made a very conscious decision there’s no mention of the words coronavirus or virus [in Staged]. It is very much about the circumstances of the world that have allowed these two people to have to talk like this. What they say is inane and, we hope, fun. We were ironic when everyone else was being quite sincere, and that seemed to connect.”