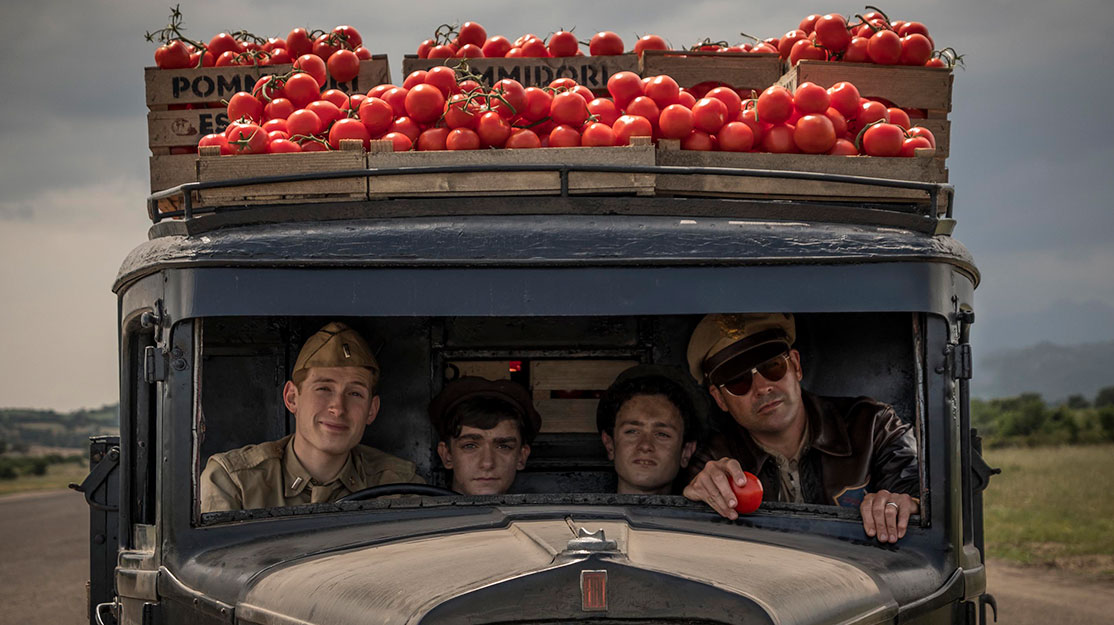 George Clooney leads the creative team behind Catch-22, a six-part dramatisation of Joseph Heller’s iconic war novel. DQ hears how the sprawling story featuring dozens of characters was brought to the small screen for broadcasters including Channel 4, Sky Italia and Hulu.

Taking on Catch-22 is a statement in itself. Adaptations in the 1970s were either flawed (Mike Nicholls’ 1970 film) or calamitous (a 1973 television pilot), falling foul of the book’s intentionally chaotic structure, encyclopaedic cast of characters and the iconic status of the novel itself, with Joseph Heller’s unforgiving satire of war, bureaucracy and human foibles already established as a literary landmark.

“There’s a justifiable protectiveness if you’re a fan of the novel,” concedes Luke Davies, who adapted the book as a new drama Channel 4, Sky Italia and Hulu with fellow Australian David Michod. “If you’re a fan, you tend to be an obsessive fan – and I am one of those.”

Yet take it on he did, pulling apart the dense, diffuse structure and piecing it back together chronologically. The six-part series, from Paramount Television, Anonymous Content and Smokehouse Pictures, focuses the narrative tightly on Second World War US bombardier captain Yossarian, serving in Italy in 1944 and as fearful of dying at the hands of vindictive superiors as much as the anonymous Germans. The early drafts attracted the attention of a very big hitter indeed.

“If you’re going to devote 18 months of your life to something, it has to be worth taking a risk on,” says George Clooney. “I don’t care about the medium, I just care about the quality of the work. There are 430 scripted television shows out there, which is great for actors. Some television is as good as anything I’ve ever seen, but there’s a lot to sift through to get to those things.”

While it’s not quite right to say Catch-22 marks Clooney’s return to television after 20 years away – since leaving ER he has turned in the odd cameo and produced a number of HBO projects – it is unarguably his most prominent TV role in years, both on and off camera. Television’s facility to give the story and its characters more room to breathe swung it for the Hollywood heavyweight. “You couldn’t do this in two hours. We kill a lot of people and, in a movie, you don’t get to learn who those characters are, so it doesn’t have the same resonance. With this it’s, ‘I liked that kid, he had a family and a life.’”

“This was a seminal book for me growing up,” says Clooney’s longtime collaborator and co-director/producer, Grant Heslov. “The sex, violence and humour made it appealing, but later in life I’ve noticed the horror as much as the hilarity. George and I read Luke’s scripts simultaneously and, by the end of the sixth, we’d agreed to direct and produce them. As he often does, George said he’d play a role because it’d make it easier for us to do it right away.”

Clooney’s turn as rigid, parade-obsessed General Scheisskopf was both a chance to indulge his inner ham and a less time-consuming part than the paranoid, vindictive Colonel Cathcart, relinquished to Friday Night Lights’ Kyle Chandler after Clooney’s workload became too great. “From the minute Kyle opened his mouth, Grant and I were high-fiving, thinking we’d hit the jackpot,” the actor recalls.

“They didn’t tell me about the high five until months later,” Chandler says wryly. “I didn’t think I should be in a remake of it until I read Luke’s scripts. There are pitfalls with Cathcart – you could easily create a cartoon – so I had to create my own arcs inside the big arc. George said it came together OK!”

With Hugh Laurie as the enigmatic Major De Coverley and other parts taken by a squadron of predominantly British up-and-comers, the lead role was won by Girls’ Christopher Abbott, who captured the innate charm and weary charisma of one of literature’s great anti-heroes.

“I like Yossarian very much,” says Abbott. “He’s an existentialist and has a lust for life. I sympathise with that fight to stay alive. It’s beautiful.”

Yossarian’s airborne experiences were made that much more visceral and credible by two vintage Mitchell B-25 Bombers, flown over from the US to the set in Sardinia. “Even going one mile per hour down a runway was scary,” says Abbott. “The nosecone is vulnerable, hot and claustrophobic. It all came together about why Yossarian is the way he is – I understood that pure fear.”

Other aspects of the era were treated with less respect. “You can’t erase history,” says Clooney. “You can’t change the way people spoke, you just make it look as ridiculous as it should have looked in 1944, but didn’t.”

Davies also addressed Heller’s grimly sexist treatment and wafer-thin writing of women, giving the female characters fuller personalities and proper names, which also precipitated an important decision from Clooney behind the scenes. “I was going to direct four episodes and Grant two, but all the Me Too stuff started coming through and I went to Paramount and said, ‘It’s all guys – we have to be part of the solution in all this.’”

Enter Ellen Kuras, cinematographer for Scorsese and Gondry and director of series including Ozark and Legion. She flew over only four weeks before production began, but was entirely unfazed. “I’m used to being the only woman on set,” she grins. “Catching up to the tone and perspective was challenging, but we got there. George and Grant wanted to make it feel more like a longform movie than six disparate episodes – crossboarding [shooting multiple episodes at the same time] meant we could all see what each other were doing and make the tone and trajectory much more seamless.”

The latter was logistically tricky, not least for Abbott. “It was insane,” he acknowledges. “We’d shoot one episode in the morning then two others in the afternoon, each with a different director, context, costumes and make-up. It was hard keeping track, even with prep time.”

“There’s no way you can do this half-assed; you’ve just got to go for it,” adds Clooney. “You’ve got to take a swing and you can’t always be subtle about it. War’s a gruesome business, so there’s a morbid comedy to it.”

Chandler believes that morbid comedy is what has kept the story fresh and relevant since its publication in 1961. “This piece is like a card – you can slice it into the deck anywhere you want and it’ll fit. Even the Romans would find this funny.”

But for Davies, it’s also a tragedy. “Our series doesn’t discard the comedy, but dark and sorrowful things happen and our ending is open to interpretation, like the story itself. For me, it’s the origin story of the geopolitical here and now, not just at the obvious level of the insanity of war, but also the insanity of bureaucracy and the systems and structures that send young men to their deaths. It still feels incredibly resonant.”