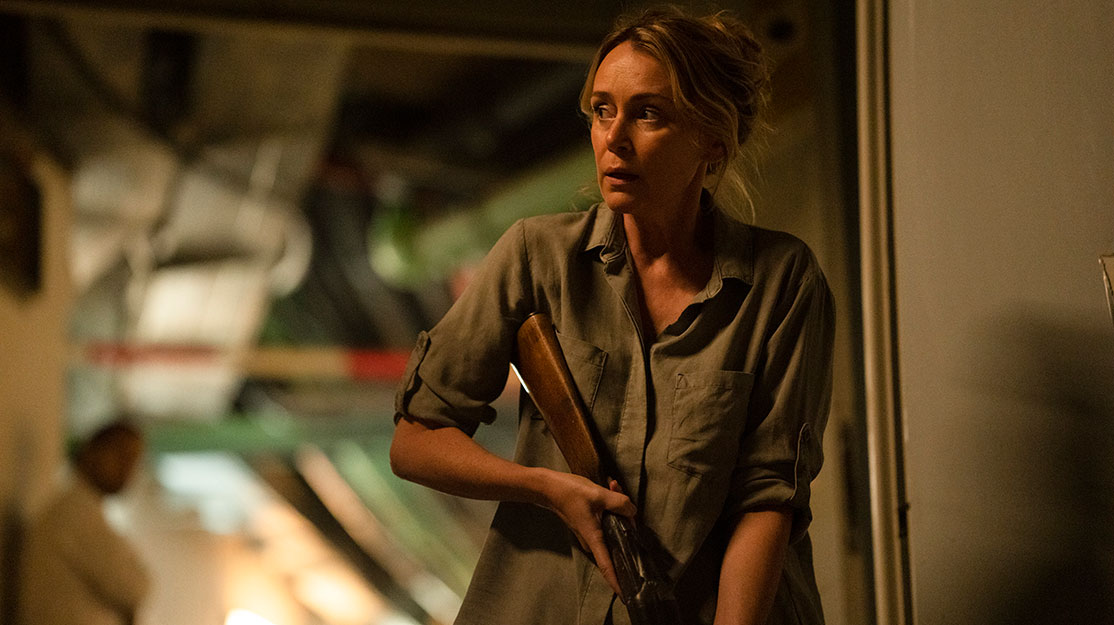 Caught in the Crossfire

Crossfire star Keeley Hawes and writer Louise Doughty tell DQ about the BBC One series, asking viewers what they would do if gunmen attacked their holiday resort, unlikeable lead characters and why they hope the stars of Gogglebox will be watching.

When Bodyguard debuted on BBC One in 2018, it became the most watched TV drama in the UK for more than a decade, with 10.4 million people tuning in for the thriller miniseries starring Richard Madden as a personal protection officer and Keeley Hawes as the home secretary he is tasked with guarding.

Now, when Hawes’ latest series, Crossfire, debuts on the same channel, there’s only one group of people she hopes will be watching.

“I can’t wait for the Goggleboxers to see it. I really hope they do it,” she says of Channel 4’s gaggle of armchair critics. “Gogglebox is my favourite show; we watch an episode every night and we all love it in the house. I’d love to see their reaction.”

The first TV drama from novelist Louise Doughty (Apple Tree Yard), Crossfire is a gripping, heart-pounding thriller that stars Hawes as Jo, who is on holiday with her family and their friends when their idyllic hotel comes under attack from armed terrorists.

As bullets fly with abandon, the group is separated from one another and forced to make split-second life-or-death decisions, with consequences that will linger long after the final shots are fired.

The project first emerged after Doughty’s psychological thriller Apple Tree Yard was adapted for BBC One in 2017. She had never thought of writing for television, but she told producer Chris Carey about an idea she had, wondering what she might do if gunmen suddenly came running into her holiday resort.

“At the time I had that lunch with Chris, that was it. That was the sum total of the idea,” she tells DQ. “Immediately he said, ‘That’s a TV drama.’ It really centred on one character – I knew I wanted it to be a middle-aged woman with a complicated life – so Jo is not just on holiday with her husband and her two children, but her teenage daughter from her first marriage, and with another family and then another older couple.

“When the attack happens, they are all separated from their other family members and then it’s just really a massive escape story. What do you do? How do you behave? And, ultimately, how heroic are you capable of being? We would all like to think we would be super heroic. That was the starting point.”

Hawes picks up: “It’s an interesting question, because what would you do? At the end of the first episode, you’re thinking, ‘What do you do?’ That’s when it becomes relatable. It’s awful.”

Launching tonight on BBC One and running until Thursday, the three-part series is the third project from the star’s Buddy Club Productions, following true crime series Honour and blackly comic drama Finding Alice – a varied slate that mirrors Hawes’ own career and her ambition to continue playing contrasting characters.

The actor says Crossfire was “at the perfect stage of development” when she joined the show, both as its leading actor and as an executive producer. Dancing Ledge Productions produces the series in association with Buddy Club, while Spanish broadcaster RTVE is a coproducer and Fremantle is distributing the series internationally.

“There was only one episode. It hadn’t quite been greenlit, but I read it and it was actually a great point for me to come in on many levels, with my production company and my exec producer hat on and a brilliant part at the centre of the story, written by a brilliant woman,” Hawes explains. “It is still a novelty to have a middle-aged woman at the centre of an action-based story. This is about so many things but it is action-packed, so to have a woman of my age at the centre of a story like this, who doesn’t have the passive role, is a very unusual thing for me to receive.”

Jo, she says, is a “really interesting” character. Despite appearing to be in a loving relationship with her husband and enjoying an idyllic holiday with friends, she is revealed via flashbacks to actually have a rather messy life. A former police officer, Jo puts her firearms training into practice once the hotel comes under siege. But Hawes is keen to stress that Crossfire isn’t just a show about her running around with a gun.

“She’s sort of the opposite of Mrs Durrell, who everybody loves, who I loved, who can do no wrong,” Hawes says of her character in long-running ITV drama The Durrells. “She’s a very messy individual and I did struggle with whether she is likeable enough, because we want to be liked. It’s great to play people who are likeable but, actually, it’s much more fun to play people who aren’t. Jo, certainly when we meet her, is in a bit of a muddle. She has this great arc so, by the time we get to the end of episode three, she’s had this amazing journey, which is great too.”

Crossfire was filmed in Tenerife during the pandemic, which meant none of the cast could leave the resort that doubled as the hotel for the duration of the shoot. Hawes’ own bedroom was also used for Jo and her husband Jason (Lee Ingleby)’s room on screen.

“The fact we were in a Covid bubble and couldn’t mix with other people was very odd and highly unusual,” says the actor. “They were shooting a German series at the same time in our hotel and, on top of that, there were ‘normal’ people trying to have a holiday at the hotel, some of whom knew about the show and some didn’t.”

Doughty continues: “There was a surreal moment when we had about eight SAs [supporting artists] dressed up in special forces uniform, heavily armed, and they just traipsed past the swimming pool. At one stage, we also had an actor swinging from a harness on a crane – I won’t say who or why because it’s a plot spoiler…”

“It wasn’t me!” Hawes interjects.

Laughing between them, it’s clear Doughty and Hawes got on famously during the making of the show. When asked about their discussions about Jo, the writer says: “I wouldn’t presume to tell Keeley anything,” while Hawes quickly responds: “I do what I’m told; I do what it says in the script.”

They did have a conversation about Jo’s accent. All the characters hail from the East Midlands, where Doughty grew up, and she was conscious of making the characters feel relatable to audiences watching at home – a key factor in making them wonder what they might do in Jo’s situation.

“Casting Keeley early on meant she was just this top-actor magnet for all the other parts,” Doughty says. “If you’ve got Keeley Hawes as your star, you have to cast at the level of Keeley Hawes because then everybody has to up their game. We got top actors for the other parts as well and not a single dud.”

Using flashbacks to inform viewers of the not-so-happy relationships between certain characters, Doughty says Crossfire is as narratively complex as her novels. Through Jo’s narration, she also raises questions of fate and destiny that led the character to unknowingly book a holiday for her family and friends that puts them all at risk.

Those themes emerged from the writer’s research about people who have lived through dramatic situations, and how they come to believe that everything they had done beforehand led to the moment in question.

“It’s human nature to become self-blaming when something appalling and unexpected happens,” Doughty says. “But of course, the truth is that none of us can predict what’s going to happen. We all just have to live our lives day by day, doing the best we can, and self-blame is really about the hunt for a rationale, the hunt to find the reason. The truth is that appalling things often happen for no reason.”

Doughty’s research for the series also involved joining Hawes on a training session designed for armed police officers, an aspect of Jo’s life that returns to the fore during the show.

“Watching Keeley Hawes load an automatic weapon was quite a highlight. I did have to physically hold her back from petting an attack dog – that was a nasty moment,” she remembers, laughing again. “There was a moment when I imagined myself going back to the other executive producers and saying, ‘She’s just had a small bite or two but it’s OK. The rest of her is still OK.’ That was a tricky moment.”

Hawes says that while executive producing doesn’t suit every actor, it’s a role she has come to relish. Now 30 years in to her screen career, she likes to be very involved across a project and finds she often has more experience than the directors and producers she’s working with.

When she works in the UK, “I know most of them, so I can be quite useful. I also know all the best caterers. I love it and I’ve been doing it for a while, so it has felt like a very natural progression,” Hawes says.

“I love having a relationship with Louise. Quite often, writers, particularly in this country, work on their own. You’ll get the script and you may never have met the writer. Being in this position, you can say, ‘Well, let’s have a conversation about the scene.’ And it’s really useful.”

With “various irons in the fire,” Doughty is already looking for a return to television as she prepares to release her 10th novel. But unlike “playing God” while writing a book, she says the main thing she has learned from working in TV is about knowing when to let go of a project and bring in other creative voices.

“The bits that full-time screenwriters I know sometimes complain about – the development meetings and the talks about character – were actually the most enjoyable bits,” she says. “I have spent 30 years in a room on my own, as Keeley says, making up stories, arguably not a normal way to earn a living. The collaborative side, the meetings and the fun getting to know Keeley and the other cast and crew was just a joy and a great relief.”

Ending with a faint hope of redemption in the air for Jo, Hawes describes Crossfire as “completely unlike any show I’ve ever done in the past – and that’s saying something, because I’ve done quite a lot. I feel I can tick off ‘action,’ but I won’t say ‘hero’ because I don’t know that Jo is one. We haven’t figured it out yet. That’s the thing you should be wondering – if she is a hero.”

Doughty adds: “I’d like people to argue about it on the sofa. That’s what would really please me.”

She and Hawes will have to tune in to Gogglebox to find out.