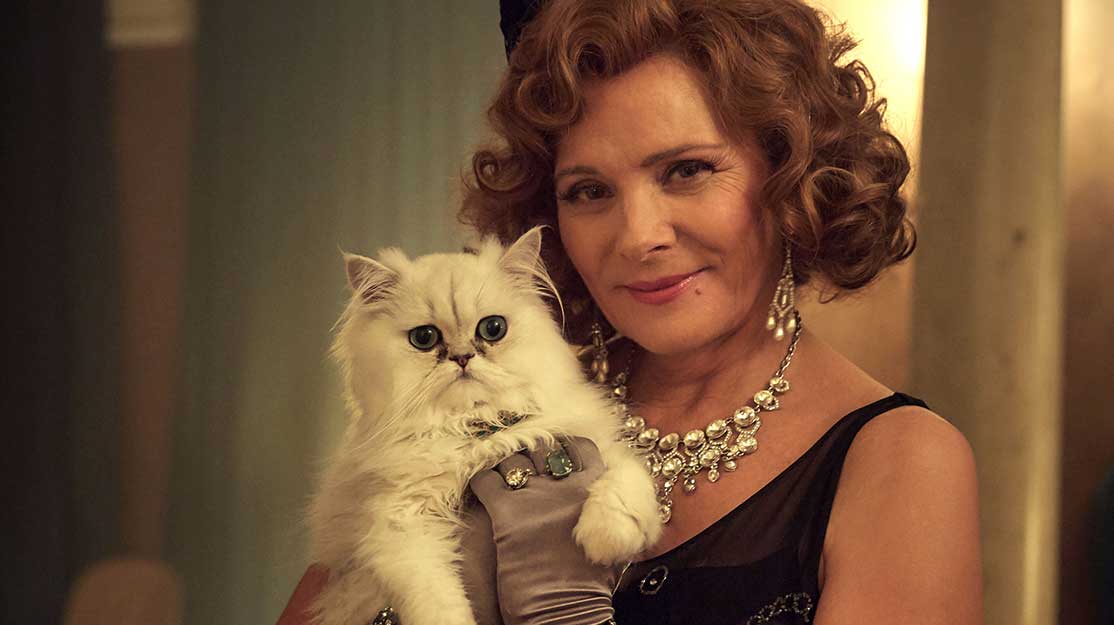 The BBC’s Agatha Christie revival continues with two-part crime thriller The Witness for the Prosecution. Michael Pickard speaks to star Kim Cattrall about playing a murder victim and why she wants to give women a voice in television.

As far as Kim Cattrall is concerned, she had some unfinished business with Agatha Christie’s novel The Witness for the Prosecution (TWFTP).

Several years ago she had read for a role in a new Broadway production of the short story, only to learn that opening night would never arrive for that particular adaptation. But in a plot twist that might have come straight from the pages of one of Christie’s novels, the actor was last year invited to join the cast of new television drama based on the same novel.

“The script came in and it was drastically changed from the novel and the stage play that I knew, but I thought it was a terrific adaptation,” Cattrall recalls. “They said to me they’d like to offer me the role of Emily French and I thought it would be really fun to do it on film and play this character.

“I felt it was a real opportunity, especially as Agatha Christie has always written wonderful roles for women. The script was very different – it was very innovative but still had a lot of strength, with the female characters in particular. She definitely told very complex women’s stories and wrote those characters well.

“When I read the script, it was great and I could make this woman much more of a force than maybe she was originally in the story. By making her more involved in the suffragettes and more of a radical instead of just a stock character of an older woman pining and fawning over a younger man, we can tell a much more interesting story and create a much more interesting woman for her time.”

Set in 1920s London, TWFTP concerns the brutal murder of Cattrall’s glamorous and rich Emily French. All evidence points to Leonard Vole (Billy Howle), a young chancer to whom the heiress left her vast fortune and who ruthlessly took her life – at least according to Emily’s housekeeper Janet McIntyre (Monica Dolan).

Leonard, however, is adamant that his partner, chorus girl Romaine (Andrea Riseborough), can prove his innocence as solicitor John Mayhew (Toby Jones) and Sir Charles Carter KC (David Haig) defend him in court.

The two-parter, which airs in the UK on BBC1 this Christmas, is the second Christie story to be adapted by writer Sarah Phelps and produced by Mammoth Screen and Agatha Christie Productions, following And Then There Were None (ATTWN) last Christmas. It is directed by Julian Jarrold and produced by Colin Wratten, in association with A+E Networks and RLJ Entertainment’s Acorn Media, with Acorn TV streaming the thriller in the US.

Though she may play the murder victim at the heart of the story, Cattrall relished the opportunity to flesh out her character, who is frequently shown via flashbacks during the two-hour drama.

“It was a fun challenge playing her,” she says of the widowed heiress. “I saw her as someone who was a bit of a rebel, who was always testing the ropes and also as quite lonely and incredibly bored. I see her as being quite restless. She meets this young man in this restaurant and he’s not the cock of the walk, he’s a vulnerable young man and he catches her eye. She invites him home and has this moment of offering him five pounds a week to be her companion. I felt for this woman who is reduced to paying for company and attention to make her feel young and vital and visible again.

“I was really happy that Julian allowed me to have fun playing this character as multi-dimensional rather than just the rich, older woman who’s preying on a young man. She’s so much more complicated than that and I wanted to bring that to Emily.”

Best known for playing man-eater Samantha Jones in HBO’s romantic comedy Sex and the City (and its subsequent film spin-offs), Cattrall says she left that role behind long ago by steering away from playing similar characters, instead choosing parts she finds challenging.

“So I feel in a very fortunate position to still be challenged and create different characters in different scenarios,” she continues. “Something to bring forward in any part I play more about what it is to be a woman my age. That’s what I’m exploring myself in real life and is the purpose of the things I say yes to.

“In some ways, Emily French is a character we’ve seen many times before. So I thought, ‘How can I infuse her with something that Sarah’s given me that I can create with Julian to make a character like Emily French more understandable, more detailed and more nuanced?’”

Furthermore, Cattrall explains that Phelps and Jarrold combined to ensure TWFTP is a pure ‘whodunnit,’ rather than revealing who the murderer is partway through the story, which means viewers can look forward an engrossing and immersive thrill ride.

“What I love as an audience member is when the story is ahead of me because then I participate more,” she says. “You don’t know who did it and they keep you on the edge of your seat and you feel for these characters because they’re being more complexly drawn, they’re more human instead of just being archetypes. What Sarah’s done in writing it is given them more humanity. You feel for them even though you feel they could have done it, which I think is an interesting way to tell any kind of thriller.”

Filming took place in the English city of Liverpool, which allowed the actor the chance to return to her place of birth – she was subsequently raised in British Columbia, Canada – and also celebrate her 60th birthday there during the shoot in August.

“I’m a combination of British and Canadian,” she explains. “My parents are both British and I’m now spending more and more time there. My immediate family is in Canada and I also have my show Sensitive Skin [HBO Canada], which shoots in Toronto, so I can go between both countries and work and feel very much at home in both of them.”

But what is it about Christie’s original work that continues to fascinate audiences and inspire new adaptations year after year?

“There’s a real need for whodunnit – they delve into characters, character flaws and everybody is fascinated by a murder and what drives it, whether it’s madness or jealousy,” Cattrall says. “They speak to people’s fascination with stepping over that line. They’re blood-curdling and scary – and when they’re done well, they’re very exciting.”

Prior to TWFTP, Cattrall has been seen on screen in two seasons of comedy Sensitive Skin, which tells the story of a woman (Cattrall) and her longtime husband who are trying to reinvigorate their lives as they struggle to come to terms with middle age.

“I really enjoy telling stories about women, especially at the point in their life where I find myself now,” the actor says. “I just think it’s uncharted territory. It would just be boring to do the same thing over and over again.

“The exciting thing is telling stories people haven’t heard before. I don’t see enough of that on television. I see rip-offs of shows I’ve seen before, and some of them are very well done, but what I’m looking for is stories and women who need a voice. We’ve had enough ‘super women’ or ‘wonder women,’ literally, and superheroes – they’re fun and there’s a place for them. That doesn’t mean what I want to produce doesn’t have comedy involved with it or irony or vulnerability for the characters. I’m trying to figure out this time in my life and I’m very much attracted to stories, whether in film, theatre or television, that are telling that story in a way I can relate to.”

Cattrall’s involvement in Sensitive Skin isn’t limited just to her on-screen role, however. She is also an executive producer – a role she describes as “fulfilling” as she looks to bring more original projects into production.

“The thing I really enjoyed about being an executive producer on Sensitive Skin, and the thing that was also most terrifying, was how much say I have, not just to the actors or directors but how I wanted to tell the story and with whom,” she admits. “That’s a really exciting place to be because you start with a blank canvas and then you choose the colours with your collaborators that you want to use, and I’d like to do more of that. That’s why working with writers is so important and exciting because everything is possible, especially at the beginning of the process.

“I would like to do more of that and really continue to tell stories and give a voice to women who I don’t think have been heard in the past.”