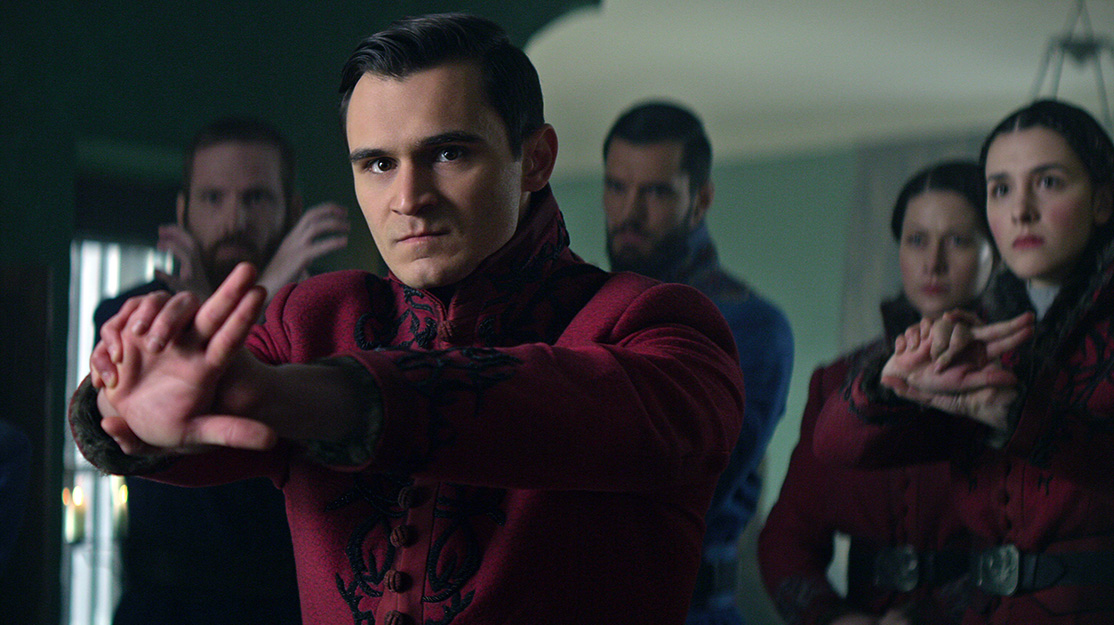 Bulgarian actor Julian Kostov tells DQ about his roles in fantasy drama Shadow & Bone and crime series Temple, as well as running a management company that seeks to bring greater representation to Eastern Europeans both in front of and behind the camera.

For the last decade, Bulgarian actor Julian Kostov has been building a screen presence that has included roles in series such as 24: Live Another Day, A Discovery of Witches and Berlin Station, and feature film Another Mother’s Son. But 2021 is set to be a standout year for the actor. He appeared in Channel 4 sitcom Back in January and can be seen currently in Netflix’s fantasy drama Shadow & Bone, while he also joins the cast of the upcoming second season of Sky original drama Temple.

But his work in the film and television industry goes far beyond acting on-screen, as his company, JupiterLights Media, strives to increase the quality and quantity of opportunities for Bulgarian and Eastern European actors to work in Western Europe and the US (Borat Subsequent Moviefilm star and Oscar nominee Maria Bakalova is among his partners) as well as developing its own slate of television and film projects.

“Leigh’s a big fan of Slavic history, culture, myth and legend so that’s something that really touched me,” Kostov tells DQ. “When I first got introduced to the show and started auditioning for it I was like, ‘Oh, this is so cool.’ It’s never been done before, never been seen like this. It’s always broadswords and 12th century technology, but now it’s a very cool, different fantasy world and I eat up fantasy like crazy.”

Fedyor, he says, is a supporting character on screen, as he is in Bardugo’s first book in the series, Shadow & Bone. Fans of the novels will know about his prominent role in the sequel, Siege & Storm, but as a result of the show conflating different parts of the book series, Fedyor builds different relationships with other characters that don’t take place in the pages of the novels.

“He’s a Heartrender, part of the Second Army of the Order of the Corporalki,” he says of his character. “It’s called also the Order of the Living and the Dead because they can manipulate human organs for good or bad. Fedyor actually started out as being a Healer, but then he decided he could save more lives as a Heartrender, as a soldier. That’s where we start and throughout the show, he has a lot of cool moments where he’s the comedy relief in some instances. He’s a breath of fresh air. I hope people enjoy him.”

Filming the eight-part series was completed before the television industry shut down as a result of the first wave of Covid-19 lockdowns last spring. But in October, Kostov was called to Vancouver in Canada for reshoots, which took place after he completed a two-week quarantine.

“It was very intense with all the masks and the protection, but you get used to it,” he says. “After that, I went back to shoot Temple season two with [star] Mark Strong in London. The good thing about Shadow & Bone is a lot of it is practical. A lot of the things were built – the whole village and the camp, the palaces were real locations in Budapest and around Hungary, because we travelled to different palaces in different cities. A lot of it is real and I really like that. That’s the magic of fantasy worlds. When you can make it, you should, and they’ve done that.”

In Temple, Strong plays Daniel, a talented surgeon whose world is turned upside down when his wife develops a life-threatening illness. Determined to find a cure, he sets up an illegal clinic in the bowels of the London Underground where he also treats an increasing number of desperate and dangerous patients.

The industry is changing, he notes, as viewers become more familiar with multilanguage, multicultural series, adding that accents are no longer as much an issue as they once were.

“Sometimes I have to put on an Eastern European accent now, which is hilarious, because in the beginning of my career, I was like, ‘I need to find a niche. I need to be American because otherwise what am I going to do?’ But things have changed and Temple was such an amazing experience.

“Mark Strong is awesome, and he’s such a great leader on set. I went into the trailer and he was just like, ‘Welcome – hey, we’re so excited to have you here.’ It just makes all the difference. That it was a very intense, dramatic performance is all I can say. This character had a lot of nuances to him and a lot of shame, a lot of guilt, a lot of anger and sorrow. I’ve just done ADR [automated dialogue replacement] so I’m really excited about people seeing it because I’ve seen it. The show itself is incredible. Rhys Ifans joins this season and he’s incredible.”

It’s now that he is an established actor in his own right that Kostov is seeking to help other actors from Bulgaria and across Eastern Europe break into the industry. Inspired by Heath Ledger’s performance as Joker in 2008 Batman film The Dark Knight, he “decided to become an actor all of a sudden” and moved to London, where he spent two years learning to navigate the world of agents and casting directors. His experience missing out on “meaty roles” led him to create JupiterLights, which has gone on to organise acting workshops to empower other actors.

“I wanted to follow my bliss and acting is what I wanted to do,” he says. “Then I became known in Bulgaria and people started asking me for advice, so at one point I decided I have to turn this into a business to be able to fully give it all my attention because I was spreading myself thin as my acting career developed.” Since then, JupiterLights has built partnerships with people like US casting director Nancy Bishop when casting US projects in Eastern Europe, while also worked with Anthony Meindl Actors Workshop, where he himself trained in acting.

Working with Bishop on Borat Subsequent Moviefilm, Kostov helped to identify potential cast members for the Sacha Baron Cohen-led feature. But such was the level of secrecy surrounding the project, “we didn’t even know what the hell we were having people tape for,” Kostov says. “I was in Beverly Hills at the time and over three days I had to send NDAs [non-disclosure agreements] to Bulgarian actresses, explain what NDAs are, explain why it’s so secretive, get them back, send them the audition monologue and upload their recordings from a different time zone. It was intense.

“Maria Bakalova was one of those people who stood out and she got a second call-back. And then, she tells this story famously where she had to go and do a screen test in London with the creators. We didn’t know who they were, and so she calls me one night and she’s really very upset. She’s like, ‘I’ve been crying with my mum for two hours, please promise me you’re not a trafficker and that those people are not traffickers. Please promise me you’re not going to sell my organs.’ I was like, ‘OK, obviously, I promise. But why would you even say that?’ And she goes, ‘Well, because things like this don’t happen to people like us.’ Then I started crying. This is why I want to help people. It was such a beautiful moment between us and I promised her, ‘I’m going to stick with you throughout this thing no matter what happens.’ It was a long process of auditioning.” The truth was finally revealed when Bakalova met Baron-Cohen at one of her chemistry tests, and then she flew to LA to film the movie.

Bakalova is now a partner in JupiterLights Pictures, the production arm of Kostov’s company, which also includes education and management divisions.

“We represent about 25 people, up-and-comers but also some of the best talent in Bulgaria, our Brad Pitts and Jennifer Lawrences. But we also have some Argentinian clients and American clients,” reveals Kostov, who repeats his pledge to empower those actors who have been underrepresented or unseen in the industry. “Now is the time to celebrate those differences. We’re focused on getting that talent seen in the Western industry. All you can ask for is to be seen.”

Bakalova’s Oscar nomination, coupled with the desire of streaming platforms such as Netflix and Amazon Prime Video to branch out into more local markets, mean Kostov sees forward momentum in the industry as audiences crave new content from an increasingly diverse array of talent.

“There’s so many non-English-language shows, like Spain’s Money Heist, German shows like Dark and Italian shows like Baby, that are super-cool,” he says. “With Maria as a producing partner, together we want to produce original content that is targeting an international audience but is based around either Eastern European characters in leading roles or about some kind of funny culture clash.”

One project he has in development is Kukeri, a potential film franchise about vampires. Another is Freedom or Death, a multi-language event series that will follow the events of Bulgarian liberation from Ottoman rule in the late 19th century.

In the meantime, Kostov is enjoying the fan response to Shadow & Bone and anticipating the release of Temple later this year. “I’m just very happily auditioning for a lot of cool things right now, so I’m just waiting for something to stick,” he says. “I’m very excited about the prospects of what the next job is going to be, and if we get renewed I will be looking forward to returning to the set of Shadow & Bone.”