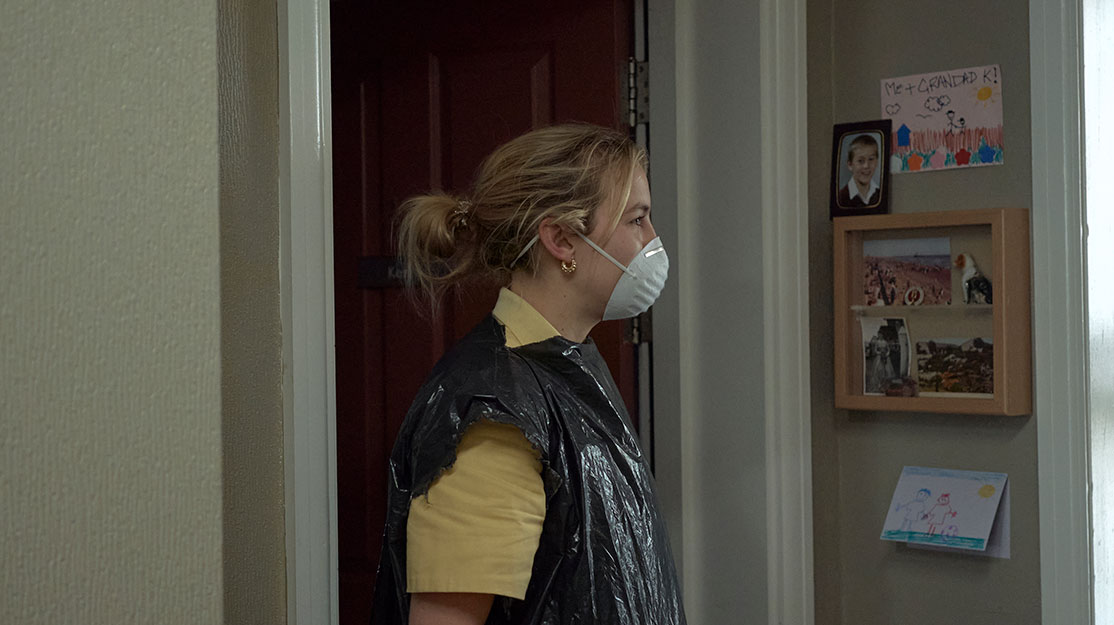 Writer Jack Thorne and stars Jodie Comer and Stephen Graham reveal how they prepared for Help, Channel 4’s hard-hitting feature-length drama about the devastating impact of Covid-19 on a care home.

One of the first dramas to tackle the horrors of Covid-19, Channel 4’s Help centres on the inexperienced but headstrong Sarah (Jodie Comer), who lands a job at a fictional Liverpool care home on the eve of the pandemic in spring 2020.

Immediately showing her aptitude for care work, Sarah soon bonds with the residents. In particular, she strikes up a close friendship with Tony (Stephen Graham), a man in his late 40s with early-onset Alzheimer’s disease.

In scenes reminiscent of zombie apocalypse films, Covid-19 initially features only in the background, with a radio story about the UK’s first death from the virus heard while Sarah is driving her car, for example.

Indeed, the first part of the feature-length drama depicts the central care home as a familial place full of warmth, where preserving the dignity of these vulnerable occupants is paramount.

When the pandemic takes hold, however, the scenario soon turns nightmarish. From a shortage of protective clothing and equipment to unclear government guidance and a struggle to get urgent medical assistance for residents facing death, Sarah and her care home colleagues find themselves very much lacking the help they need.

As the situation worsens, with several residents succumbing to the virus, Sarah goes to increasingly desperate measures to protect Tony and the others.

Debuting on Channel 4 tomorrow, Help was created and written by Jack Thorne (The Virtues, His Dark Materials) and directed by Marc Munden (The Third Day, Utopia). Produced by Channel 4 with One Shoe Films and The Forge, it also stars Angela Griffin, Sue Johnston, Ian Hart and Cathy Tyson.

Here, Thorne, Graham and Comer discuss how they prepared for the emotionally charged drama.

Help came about after Stephen Graham asked regular collaborator Jack Thorne to set up a project in which he could star alongside Jodie Comer.
Thorne: We were talking and he said, ‘You should write something for me and Jodie.’ My jaw dropped because they’re two astonishing actors. It felt like there was a real possibility, but then I couldn’t think of anything good enough. I was sort of searching through world history to find anything that could work, and I couldn’t find anything, and then this pandemic happened.
There was a small [news] piece right at the beginning of the pandemic about a number of deaths occurring in one care home, and I sat forward. My mum was a carer and I know residential care very well. I started looking into it and that’s where this whole thing started being born.

Thorne was keen to ensure he did justice to what he describes as an “essential” story.
Thorne: Finding characters for them didn’t scare me, because they can do anything. What scared me was having a story that was good enough to tell, and then this happened. The more we looked into this pandemic, and particularly care homes, the more [I realised] it was not just a compelling thing to write about, but an essential thing to write about.
I do think TV is amazing. That thing of having a box in the corner of your room which you can have a conversation with is beautiful. I grew up with TV that had something to say, and it felt like social care needed someone speak for it. I’m not saying we’re talking on behalf of social care, we’re just telling a story about social care, but we’re trying to be an advocate while also telling it.
A story that holds people felt like a really important thing to do, and a really daunting thing to do. But with [Comer and Graham], and then with Marc, it felt like it was the best thing to tell it with.

The actors found working with Thorne and director Marc Munden to be a particularly collaborative experience.
Comer: When we had the initial talks with Jack, he was very explicit in saying, ‘You guys are going to be a part of this the whole way through,’ so we were welcomed with open arms in that sense. It’s the first time I’ve been able to be a part of something in that way.
The first draft of the script that we got, it was all there, fully fleshed out, and it was so beautiful. There was only fine tuning after that.
It’s so great to be in a space where you can give your ideas. Sometimes your ideas aren’t the best and you go, ‘Right, I was wrong,’ and you step back and you let someone else, give their idea. It was such a wonderful experience.

Graham: The great thing about Mark is that an idea can come from anywhere in the room. I love that – when a director doesn’t have an ego and just wants what’s best for the piece, and he takes the idea from wherever it is. Sometimes us actors don’t have a clue, but we try!
You’ve got the beginnings of something beautiful from Jack and then it’s our job to try to take that and add a bit of spice to it to make a really nice soup.

With the care home crisis depicted in the show so fresh in the memory, the research process was emotional for Thorne.
Thorne: It was the rawest research process I’ve ever been through. I’ve written quite a lot of stuff that looks at dark places, and so I talk to people who’ve been going through extraordinary things and have had extraordinary things happen to them, and I talk to a lot of people in pain. This was like nothing else.
It wasn’t just the fact that they were emotionally broken up by it – there were carers who felt responsible [for Covid deaths in care homes where they worked]. That was the bit that felt unforgivable to me, and that’s the bit I still get really upset thinking about now, that they were made to feel responsible when there was no support for them whatsoever. That, beyond anything else, will never leave me.

Comer’s preparation involved speaking to care home workers from across the country.
Comer: I was really lucky. Channel 4 put me in touch with a few women from several care homes across the UK, and they were so open and willing to chat to me. It was kind of like, ‘Nothing’s off limits – whatever it is that you want to ask, go ahead.’ To have that access was incredible.
Before Covid, there was so much joy and so much love within these homes. I feel like that’s another element of these homes that Jack captures so beautifully. I wanted to know about all those stories as well [as the bad times during the pandemic] – the day-to-day of the relationships and funny stories.
The biggest thing for me was there is no black and white. It’s not residents and carers, it’s a family and they act on instinct. I wrote all those things down and hopefully we are able to show both sides of that.

The Merseyside-set drama gave Liverpudlian star Comer, who famously plays a Russian assassin in Killing Eve, a rare opportunity to use her real accent.
Comer: It was so nice to celebrate Liverpool; I feel like it’s so rarely seen on television. And even in my own life, I’ve always felt like, to get close to a character, I need to be further away from myself.
I’ve very rarely been able to use my own accent, so there was something really special about being able to explore that side of myself and the women I know, and the fire I know so many of the women in my life have. So it kind of felt like a celebration of that as well.

To play Tony, Graham spent time with several dementia patients.
Graham: Jack put me in touch with this wonderful woman called Nikki at Rare Dementia Support, which I’ve kind of become an ambassador for now in many ways. I did a lot of research and looked at a lot of stuff medically, but then I became a member of their groups for like 10 days, having coffee mornings with them. I got to meet the most beautiful people and it was really wonderful.
I felt like some kind of journalist going out and then coming back to my boss, Marc, to report – ‘This is what I’ve learned today, boss.’ We’d have these discussions and I’d go, ‘I think we can take a bit from this lovely woman or this man,’ ‘This is amazing’ or ‘This is really sad.’
Together, we elaborated on these findings that came from real human beings – not books or any other kind of stimulus, but real people, real lives, real stories – taking that and then somehow mashing it together and coming up with our character.

The two scouse actors clearly enjoyed working together.
Comer: It was everything I thought it would be and more. Stephen has been such an incredible figure in my life, whether he realises it or not. On the last job we worked with each other on [2012’s Good Cop], it was one day of filming. So this idea that we were going to spend over a month together, getting to kind of play around, [was great]. I feel like we work in very similar ways.

Graham: I think she’s rapidly going to become one of the finest actors we’ve ever had. She’s exactly the same as that young, sweet woman who was just starting out a few years ago. And the fact that she learns from wonderful actors and amazing directors now, it doesn’t faze her at all.