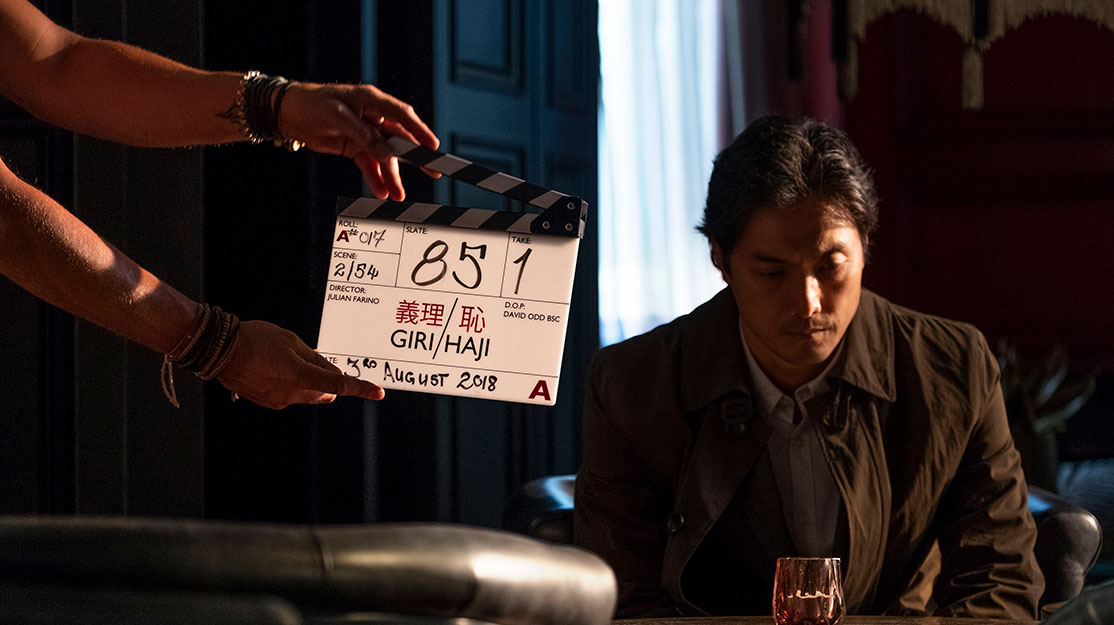 From the makers of Chernobyl comes Giri/Haji, a drama set between London and Tokyo that explores how a single murder affects two cities. DQ visits the set of the Netflix and BBC series.

It’s a freezing cold evening in central London, where news crews and bewildered passers-by mill around, wondering what has just happened. It is the aftermath of the Battle of Soho, the action-packed set piece that sees the multinational cast of Netflix and BBC2’s Giri/Haji taking up arms in an explosive bout of score-settling.

This violent reckoning is the climax of events set in motion by a single murder in London that shatters the fragile truce between Tokyo’s Yakuza gangs. Dispatched to investigate is careworn detective and family man Kenzo (Takehiro Hira), chosen because of the suspected involvement of his wayward brother Yuto (Yosuke Kubozuka).

Once in the British capital, Kenzo is swept up into a dizzying world of uneasy alliances (with Kelly Macdonald’s lonely cop Sarah and rent boy Rodney, who actor Will Sharpe likens to “a peacock you find in a skip”) and dangerous foes (Charlie Creed-Miles’s remorseless British gangster Abbot and his weak-willed American ally Vickers, played by Justin Long). All will face the consequences of past decisions over the following eight episodes.

There’s a lot going on in Giri/Haji (which translates as Duty/Shame), from Bafta-nominated screenwriter Joe Barton (Humans). Blending Yakuza thriller and kitchen-sink drama, character study and even impressionistic animation, its very novelty proved irresistible to Macdonald, as did the opportunity to reunite with director A Child in Time director Julian Farino.

“Julian phoned me up to ask if I’d read it,” she says. “I’d been told it was a Tokyo crime story that bleeds into London, but it’s so much more than that. It takes you off on unexpected tangents. The bonds that people share are unusual and it’s constantly surprising – all the more so, given Joe knew nothing about Japanese culture when he started, but that’s the confidence of youth, I guess!”

The initial concept was a loose one dating back almost a decade, inspired by Barton’s then-girlfriend taking a masters in forensic crime science and being intrigued by a middle-aged Japanese man sitting in silence at the back of the lecture hall. “It turned out he was a detective in the Tokyo police department,” says Barton. “There was something about that image that felt very cool and mysterious – it was an interesting protagonist for a high-end crime drama I might write in eight years time…”

Sister Pictures founder Jane Featherstone (Chernobyl) was intrigued, joining Barton to work up a script commissioned, then rejected, by another broadcaster. “I think they were afraid of how the Japanese element might land,” she says. “None of us know the answer to that yet, but both BBC and Netflix were excited by doing something a bit different. Netflix was keen to have something that worked in an emerging market like Japan, while the BBC, like all public service broadcasters, needs bold ideas to stand out more than ever.”

Those ideas are embodied by an opening 25 minutes featuring neither the English language nor anglophone actors. DQ finds the man required to carry much of those first scenes seeking sanctuary (and warmth) inside Soho Square’s Huguenot church. Largely unknown outside his native Japan, Takehiro Hira is excited about a role that could make his name internationally.

“Forty-something, family person, quite demanding parents – when I first read the script, Kenzo was me,” he muses. “Detective stories in Japan are usually black and white, but Kenzo has dark sides and personal baggage, which was so refreshing. I was giving a bit more than Julian wanted at first, so it was a wonderful challenge to learn to act more minimally than is usual on Japanese television.”

Hira is supported by a stellar Japanese cast – not that the Giri/Haji team knew that while they were holding auditions. “We were completely ignorant!” laughs Farino, who split directing duties with Australian director Ben Chessell. “Masahiro Motoki [Yakuza boss Fukuhara] is one of Japan’s biggest movie stars and Yosuke is a huge name over there. I was struck by the unbelievable respect, precision and preparation of Japanese actors: they were word-perfect every time, which was humbling because not every British actor is like that.”

Thanks in part to Giri/Haji’s intentionally slippery grasp of genre, finding the tone wasn’t straightforward. “I get a lot of scripts where I feel I’ve shot them before I’ve finished reading them,” says Farino. “This was the opposite, a genuine journey – it respects the audience from the off. By degrees, you define it. Everyone has scars and moral complexity, but the pleasures were too great to make it noirish and miserable, and I didn’t want it too verité, so we didn’t go handheld.

“I describe it as a few inches off the ground, slightly heightened. [DOP] David Odd and I had never shot on such wide lenses before; we felt like we were shooting a wide shot and close-up at the same time.”

Two months filming in Japan proved a challenge both linguistically and logistically, but Farino, speaking not a word of Japanese, thrived on the experience. “It was an absolute pleasure. When you’re directing, you’re trying to get the feeling for a scene rather than hanging on the dialogue, so it felt surprisingly natural. We felt we were seeing little pockets of Tokyo you wouldn’t usually see, trying not to do the neon lights thing. It felt more like downtown Manhattan than Tokyo in the movies: washed-out browns and greys,”

“Tokyo isn’t easy to film in,” Barton adds. “In the UK, you can shut down a street for a bit and annoy everyone, but in Japan you can’t disturb people. The permissions process meant you needed a lot of time to set everything up; just finding somewhere we could put cars on a pavement was an incredible challenge. But weirdly, they’re very relaxed about firearms. In the UK, guys follow you around and lock up the gun when you’re not using it. In Japan, we filmed a gunfight in this big house and there were guns everywhere – you’d go to the toilet and there’d be one left by the sink. One actor was allowed to take one home to practice.”

The target for Giri/Haji was to stand out in a crowded landscape and break new ground for British television. “Very little British drama easily lends itself to epic,” says Featherstone. “We struggle with that in this country, but Joe found this cultural connection freed us up to think in a slightly different way about storytelling. We wouldn’t have been so brave if had been a purely British story.”