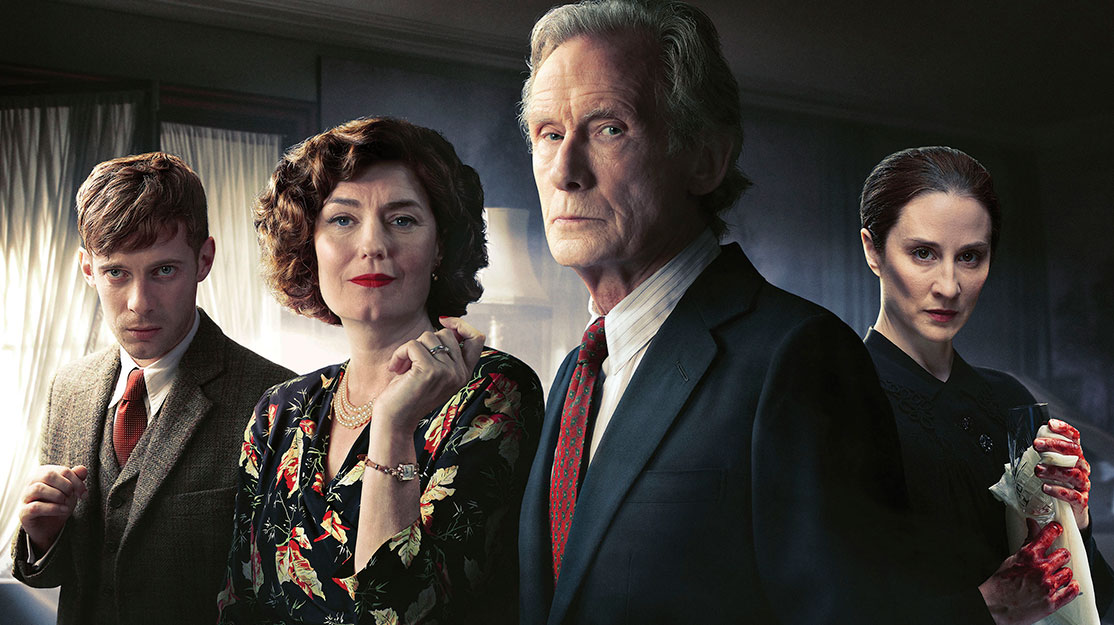 Long-hidden secrets are revealed in Ordeal by Innocence, a murder mystery that shatters the perfect image of a 1950s family. DQ hears from stars Bill Nighy and Morven Christie and writer Sarah Phelps about the latest Agatha Christie adaptation coming to the BBC.

When Ordeal by Innocence airs on the BBC, there’s one person who definitely won’t be watching. “I’m not particularly fond of the sight of myself, or the sound of myself,” reveals actor Bill Nighy. “It’s weird. But it’s the acting, because you know what you had in mind and you know, therefore, how far short it falls from what you had in mind.

“I’m much better now because I realise people just like stuff and if they like it, it’s fine. I used to think it was some conspiracy to make me look stupid. I was a mess and I used to get very paranoid. But now you realise people just want to watch a story. The minutiae of my performance is not really their concern.”

However, there was some concern that nobody would get to see Ordeal by Innocence, the latest Agatha Christie adaptation from writer Sarah Phelps and producers Mammoth Screen and Agatha Christie Ltd, following And Then There Were None and The Witness for the Prosecution.

Originally due to air on BBC1 at Christmas 2017, the three-part miniseries was pulled from the schedules after allegations of sexual assault were made against Ed Westwick, who had been cast as Mickey Argyll. He denies the claims.

But after director Ridley Scott reshot scenes from All the Money in the World, replacing Kevin Spacey with Christopher Plummer, the production team decided to follow suit and reshot 35 scenes in 12 days with Christian Cooke replacing Westwick.  Ordeal by Innocence will now debut on April 1.

At the time, the producers said: “While the allegations against Ed Westwick remain under investigation – allegations that he strenuously denies – the producers of Ordeal by Innocence have decided to reshoot parts of the series with another actor.”

The setup of Christie’s story, first published in 1958, remains the same. It opens with the murder of wealthy philanthropist Rachel Argyll (played by Anna Chancellor) at her family estate, Sunny Point. Her adopted son, Jack Argyll (Anthony Boyle), a young delinquent, is then arrested for her murder, despite protesting his innocence.

Eighteen months later, mysterious scientist Dr Arthur Calgary (Luke Treadaway) arrives at Sunny Point claiming to have the alibi that can prove Jack’s innocence. But Jack died in prison before the case could come to trial, and the Argyll family is reluctant to dig up the secrets of the past.

Rachel’s widower, Leo (Bill Nighy), is about to remarry his secretary, Gwenda, and none of Rachel’s other adopted children – Mary, Mickey, Tina and Hester – nor longstanding housekeeper Kirsten, are willing to reopen that most horrendous chapter of their lives. However, if Jack is innocent, then someone else must be guilty.

With every member of the family fearful of these new revelations, what makes Leo a suspect? “He lives and breathes in an Agatha Christie novel,” Nighy jokes. “You’d have to go some way to invent him as shady; he pretty much behaves impeccably. The only thing about him is – and it’s never specifically stated – I don’t think he’s got any money. The money is his wife’s. Therefore, that might make him suspicious in some way.”

As Kirsten, an adopted daughter who is also the family’s housekeeper, actor Morven Christie (The Replacement, The A Word) stands out as a member of the family who may be the closest thing to an outsider.

“It’s a lot more to do with status,” Christie says. “She’s part of the family but she’s out of the family. They can argue over the breakfast table, she wouldn’t interject, but part of that is just her character. She is holding a lot of things inside her that come out through the story. She’s an incredibly controlled, together woman until she’s not.”

Don’t be fooled into believing the maid did the dastardly deed, however. “When I first read the script, I got two pages in and was like, ‘Clearly this maid did it, because otherwise they wouldn’t cast this face. I have a resting bitch face. They’re trying to deceive you by the casting,” Christie says.

Playing Kirsten also provided the actor with a role different from the more outspoken parts she is used to playing, with the housekeeper largely silent and speaking through expression. But having previously worked with Phelps on Oliver Twist, the actor and writer spent several phone calls talking about Kirsten. “There’s no element of a character’s history she doesn’t know so I always want to check it with her,” Christie says. “So it becomes a proper collaboration, and not every writer’s up for that. Sarah really is. But she’s not prescriptive in the slightest. Sarah’s quite an extraordinary individual. She’s magic.”

Despite this being her third Agatha Christie adaptation – and with a fourth, Poirot mystery The ABC Murders, on the way – Phelps has never been a “Christie aficionado,” admitting she had never read the crime novelist’s books or watched one of the countless other adaptations of her work.

But reading And Then There Were None for the first time, her impressions of “nice, safe, queasy nostalgia” were blown away. “It was so brutal, remorseless and so savage and completely unexpected,” she says of the story, which sees 10 people gathered together on a remote island and killed off one by one.

She found more freedom in The Witness for the Prosecution, a short story set in the mid-1920s, while adapting Ordeal by Innocence was a very different prospect.

“It is all about something that happened a very long time ago,” she explains. “Nobody really gets killed. Everybody just sits around in a hiatus talking about things and nothing really happens. Somebody goes to London and goes out for dinner, and that’s about it.

“So it’s much more of a contemplative piece of writing. But with a murder mystery, there’s got to be a murder and there’s got to be a mystery. And there’s got to be something that compels you through. So I just basically took the idea of this really fucked-up family and thought about the 1950s a lot and then – probably to the horror of the [Agatha Christie] devotees – I changed the ending. I’ve changed quite a lot and I’m lucky the [author’s] estate are generous enough to go, ‘You’re mad but we’re just going to let you do it.’”

Phelps began writing the miniseries by thinking about “the bunting and the blood of the 1950s,” a period just a few years removed from the horrors of the Second World War and a time of great tradition but also of motherhood and womanhood, with a young Queen Elizabeth II on the British throne. And at its heart is the story of a ‘perfect’ family, except it isn’t perfect at all.

“For loads of different reasons, it took a great deal of time to burrow away at it and actually find the real spirit of it,” the writer says of Christie’s novel. “I was thinking about the 1950s and street parties and also conspiracy and silence – I wanted those two things to be the mood of the book. I wanted this sense of people smiling but, underneath, just screaming with fury and rage and all the lies that families keep.

“The thing I kept thinking about was perhaps there’s a way of telling the story of the 20th century through murder mysteries that tells us where we are in the 21st. So that’s kind of what I’m into doing – we’ve had the late 1930s [in And Then There Were None] and the mid-20s [for The Witness for the Prosecution] and now we’re having the mid-50s, and the next one [The ABC Murders] will be the early 30s.”

For Phelps, the appeal of a murder mystery is not ‘whodunnit’ by ‘whydunnit.’ “That’s what’s exciting to me, picking away at the characters and going, ‘Why are you doing this?’ Not how you did it with a poker or whatever, but why? What is making you do this?”

Phelps is well versed in family tension, having written dozens of episodes of long-running BBC soap EastEnders. Now in Ordeal by Innocence, distributed worldwide by IMG Global, the residents of Sunny Point find there is no one to trust. “There is a murderer under this roof and they smile and they get away with it,” she adds. “It’s one of those things that puts a shiver up your back.”