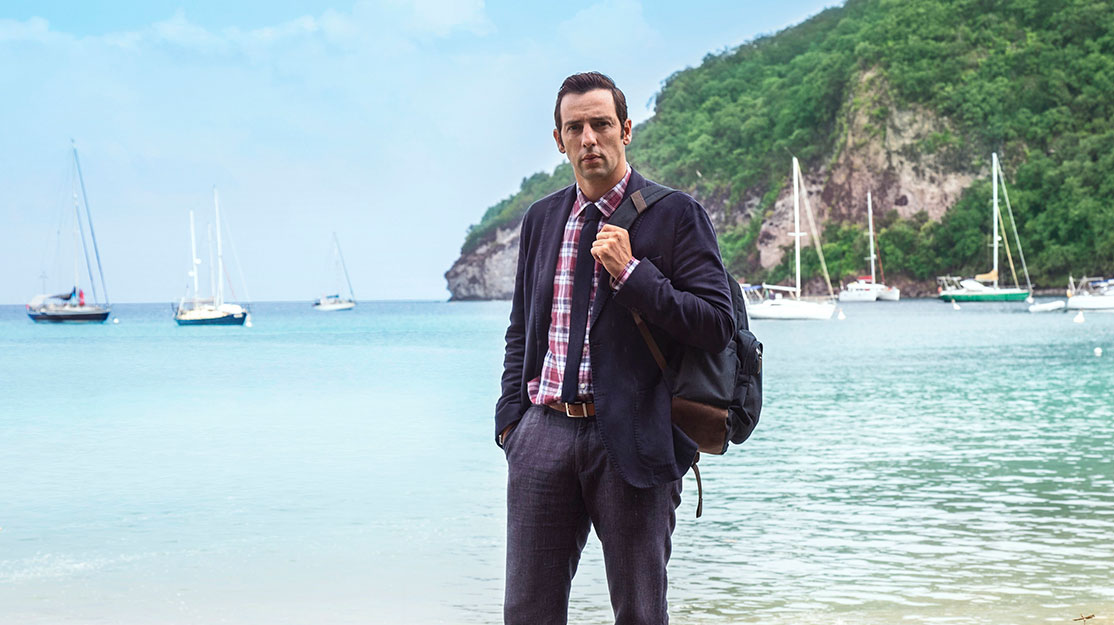 As Death in Paradise returns for its landmark 10th season, location manager Rébecca Bering and production designer Eryl Ellis tell DQ about their roles in making the series on the Caribbean island of Guadeloupe.

Since its launch in 2001, BBC crime drama Death in Paradise has served up a welcome slice of Caribbean sunshine into the winter television schedules. This year will be no exception, as despite the ongoing Covid-19 pandemic, filming  for the series’ landmark 10th season took place last year, with cast and crew once again shooting in the idyllic surroundings of the French Caribbean island of Guadeloupe.

Produced by Red Planet Pictures and distributed by BBC Studios, the new season also sees the return of DS Florence Cassell (Joséphine Jobert), who is ready to get back to work after her fiancé’s death two years ago – but she hasn’t banked on her new boss, Neville. Other returning cast members include Don Warrington as Commissioner Selwyn Patterson, Tobi Bakare as DS JP Hooper and Elizabeth Bourgine as Mayor Catherine Bordey.

Ahead of season 10’s launch on BBC1 tomorrow, location manager Rébecca Bering and production designer Eryl Ellis tell DQ about the roles they play in making the series.

How did you join the series?
Bering: I joined the Death in Paradise crew in 2015 for season five as an assistant location manager [ALM], becoming location manager for season 10. It was my first experience as an ALM and also in a shooting environment. Previously I was the manager of a real estate company in the Caribbean. These two positions are similar in one respect: you have to find the perfect location or house related to the storyboard. Since the start of this amazing opportunity, I have worked on 48 episodes of Death in Paradise and I really enjoy it.

Ellis: I had just finished the first season of [Welsh crime drama] Hinterland. After a wonderful and engaging experience in cold, wild Wales, I was approached by Red Planet. I happily found myself tempted to Guadeloupe. I’ve made so many friends over the years, both islanders and visiting crew. It’s great when a job becomes an adventure.

Rebecca, what does your job involve?
Bering: My job in the locations department is to read the script and find the perfect location in a precise area. The perfect location for me is a setting that is exactly as it’s described in the script. For example: ‘A pretty house where an energetic, single young lady lives, with a small gate in the front and a pool in the back. Someone is spying on her from the garden behind bushes but she cannot see him…’
The perfect location is also the location the director, producer and line producer will love and sign off because they can imagine the story there, and the location respects the budget.
One more very important, practical criteria: the perfect location is also a location the cast and crew can access, where we can park the unit and the trucks next to it and have catering, a green room and changing room not too far away. I am thinking about all these criteria when I am scouting.
Another part of my job is the relationship with the owners and administrators. It’s really important to take care of the locations and organise the dressing of the set, the arrival of the crew and the get-out. The locations team is the main contact between production and owner.

How do you work with the rest of the team to find the right locations?
Bering: When I’m scouting, I always search for the two best options. The first person I show the location to is the director, and after that the producer, the art director, DOP, first assistant and so on. On Death in Paradise, when they agree all locations for two episodes, we have a tech recce day, showing these to the heads of each department – camera, lighting, sound, grip, the art department, production, unit – and I make a list of all their needs to organise them for each location.

Does the show have a particular style, such as presenting a ‘postcard’ view of Guadeloupe or avoiding tourism spots?
Bering: Death in Paradise, for me, has a particular style. It’s a family series with not too much blood. This series shows some of the most beautiful places in Guadeloupe, with sea or rainforest views. Guadeloupe is a beautiful island with many towns, which is very different and interesting for shooting.

Eryl, what is your design brief for the show?
Ellis: The show was established by the time I first came on board but I wanted to define its separate visual worlds a bit more. We agreed to keep a visual tab on each hero set. A prop in the beach shack would have nothing too similar in Catherine’s bar, and the police station again is unique. We wanted to be more specific with the visual language.
I was also intrigued by how much better things look from under cover in such harsh light. We tried to give the camera shaded areas to shoot from and through whenever possible. We also are very aware of colour discipline. Primaries are very powerful in harsh light. To be fair, most end up in a fabulous bleached state in no time. We decided, in the main, not to override the natural state, keeping the colours muted or washed. The light did the rest for us.

What is the balance between building sets and dressing locations?
Ellis: As ever, a ‘walk-in’ location is extremely rare. We inevitably have had to build quite a lot, and certain elements, like an archeological camp, are basically a field before we get going, albeit in a fabulous situation.
We build the shack every season. We’ve just finished and are taking the structure apart to put it in a container until the shoot starts again later this year. This year we’ve constructed a hospital with a maternity wing because of Covid restrictions. We are always enhancing what’s there to a certain degree. I have to work closely with our location manager to find the most suitable option. It’s then a matter of adjustment.

How do you both prepare for each season?
Bering: I have six weeks’ preparation for each season and I begin by searching the locations for the first two episodes. When we begin to film these two episodes, I scout for the next two and continue in the same way until we finish the eight episodes of the season. In Guadeloupe, we don’t have companies like in England with real location databases where you can pick up locations. I have my own database and a good memory.
Ellis: I’ve done five of the 10 seasons to date. Each one has been very different in its challenges. Crewing up is very important and I like to get to prospective co-workers very early. One has to have the time to digest what the job entails. An initial reaction to an offer is, “Well yes, what’s not to like?” However, most folk come back with a reason that they can’t make the time and distance [from the UK] work.
I like to enjoy the British climate beforehand, with winter walks and cold days at sea on my boat. It’s like going ‘off world’ when you get to Guada. We also buy enough to fill a 20-foot container with what’s not available on the island, be it properties or consumables. It’s a small, exotic island after all.

Where are some of the main locations used in the show?
Bering: Most of the locations used are in the following towns: Deshaies, Pointe-Noire and Sainte-Rose. There are also some in Saint-Francois, Gosier and Bouillante. All the main locations – Honore Police Station, the shack and Catherine’s bar – are in Deshaies. That’s why we film in this area and the closest towns.

What are some of the strangest or most unusual locations you have found?
Bering: Two of the most unusual locations I have found were for season 10, so I will let you discover these new episodes soon. In the previous season, I remember an isolated clearing I found to land a helicopter in with a direct view of the La Soufriere volcano in Guadeloupe. We went to scout a volcano in Montserrat by boat to compare, which was an amazing experience.

Eryl, does the show have a particular design style?
Ellis: There is a Death in Paradise world. It’s certainly not what is seen day to day in our island lives out there. For us in design, it’s a balance between a retro island reality and what is asked for in the scripts. The Land Rover and bike combo are not exactly for motorway traffic use and the police station is old and beautifully battered, but we can have bodies discovered by state-of-the-art ground piercing radar.
The trick, I believe, is to keep our core identity as consistent as possible. It’s a place everyone would like to visit. The shack is truly a build made in paradise. When we put it up on the beach at the start of a season, you stand there and look at the sea… It still makes me go ‘wow.’

How do you use the island setting to enhance the show’s design?
Ellis: I had a moment this year when we were looking for a location to shoot a hospice set. We’d looked at an institutional bedroom. It was OK, but very uninspiring. Jordan Hogg, the director, called me over to a refectory in the collection of small buildings. He said: “This is it,” and I was thinking, “Thanks pal, it’s a canteen.” I looked back at where I’d come in and there was a fantastic vista of a green Caribbean outlook through a large window wall. We built an interior wall set and put in some curtains and props. Simple. Utilise the good stuff.

What have you most enjoyed about working on the show?
Ellis: Like all other projects, it has its moments, but it’s up there with the best work experience I’ve had in my career. I love making the show in the circumstance of the island. I regularly swim out a couple of hundred yards from the crew hotel at sunset. There’s a marker buoy out there. This year I saw the sun drop over the horizon and a full moon rise up over the mountains at the same time from this spot. It’s really not a bad gig!

What are the biggest challenges in your job?
Bering: The challenge is to make everyone happy and to satisfy the production and owners.
Ellis: Guadeloupe is a part of France. It has most facilities that you would expect in a contemporary metropolitan situation. However, the only art shop on the island closed this year due to Covid. There are no prop stores, rigging facilities, SFX, car companies, animal handlers, drape hire or transport companies. Apart from this, it’s a walk on the beach! Ironically, I think our biggest ask was to produce a London trading floor and boardroom in Guadeloupe as well as the interior of a London police station. I think we got away with it.

Rebecca, is there one location you would like the show to use in future series?
Bering: There is one I would love to film and it’s an entire town with beautiful locations and small alleys, totally Death in Paradise postcard. It’s called the Les Saintes islands.