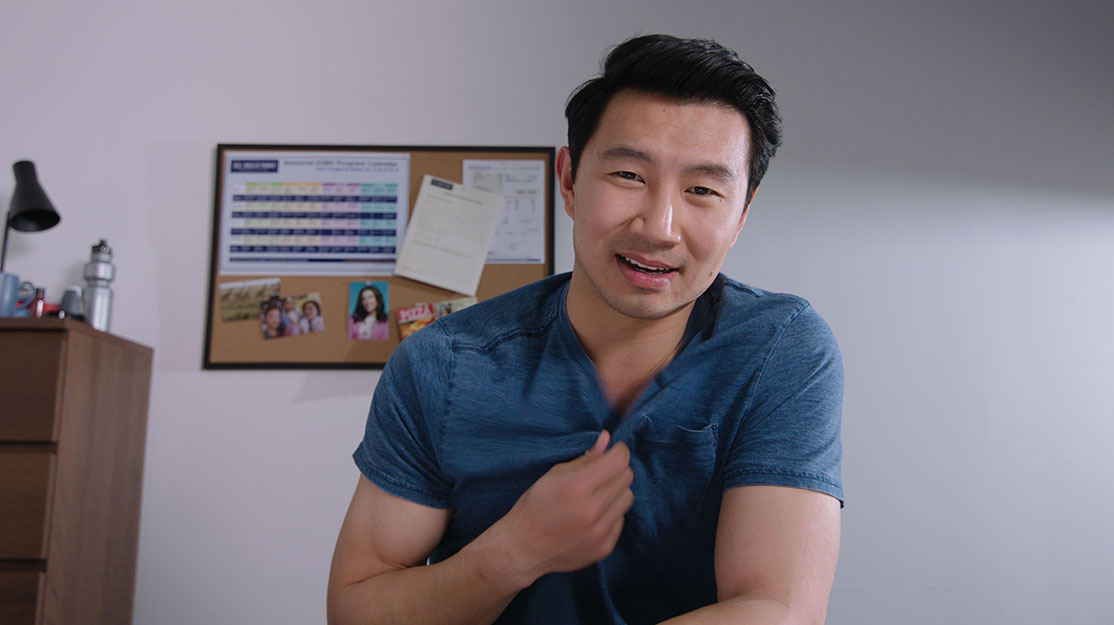 Kim’s Convenience star Simu Liu talks about becoming the first Asian ‘title superhero’ in the Marvel Cinematic Universe and discusses how minority actors should be better utilised to shape their characters and stories on screen.

It might seem like a bold move for an actor to audition for a role via Twitter, with seemingly little chance of success. But Simu Liu has been lobbying Marvel to play a superhero since 2014, when he first Tweeted: “Hey Marvel, great job with Cpt America and Thor. Now how about an Asian American hero?”

It wasn’t until late 2018, however, with a film based on comic book character Shang-Chi long in development, that the production started to ramp up – as did Liu’s Twitter-based efforts to the land the lead part. “OK @Marvel, are we gonna talk or what #ShangChi,” he Tweeted that December.

Fast-forward another seven months to June 2019 and Liu stepped out on stage during Marvel’s presentation at Comic-Con to announce he would be starring in the upcoming blockbuster Shang-Chi & the Legend of the Ten Rings, marking the first time an Asian superhero will be a title character in the Marvel Cinematic Universe (MCU). Filming took place in Australia during 2020 and the movie is now set to hit cinemas in September as part of Phase Four of the MCU.

While securing the role may still feel like a dream to Liu, he’s now got the action figures to prove it’s very much reality. “It’s a little crazy,” he tells DQ. “I remember the first time I actually looked at my Marvel Legends figure and held it in my hand. I have this beauty mark right next to my left eye and I looked at the action figure and I looked right beside his left eye and I saw the beauty mark. I was like, ‘This is insane.’

“When I was little, I remember playing with the He-Man action figures and they looked kind of cartoony. Now they’re based on 3D scans of the characters. There are moments where I look at the light as it hits the figure at a certain angle and I’ll be like, ‘Oh, that’s creepy. That’s weird how much that looks like looking in a mirror.’

“But I also think it’s really cool because obviously, as far as being the first Asian superhero in the MCU to get a title movie and to get this attention, it means millions of children will get what I never did growing up, which is an action figure that looks like them.”

Liu isn’t the only star of Shang-Chi to be remade as a six-inch figure, with Awkwafina’s Katy, Meng’er Zhang’s Xialing and Tony Leung’s Wenwu also available in stores.

“That is one of the amazing things about this project: there is no one token character,” the actor continues. “There’s just such a plethora of different kinds of Asian or Asian-American experiences coming together and converging. That’s how you get more nuanced conversations, rather than being just one in a group – and we’ve all seen those movies where there’s one guy that sticks out and you know why he’s there and he dies maybe like a quarter of the way in to the movie. But it’s a different ball game altogether to have a movie like this, which is a total celebration of our culture and our faces.”

Increasing diversity in front of and behind the camera has been a talking point within the film and television business over the last few years, and the launch of Shang-Chi comes at a time when hate crimes against Asian Americans are on the rise.

“I do think it’s a benchmark moment,” Chinese-Canadian actor Liu says. “Our community doesn’t have that many wins, representationally, to celebrate. We recently had our first Asian Oscar nominee in many years – Steven Yeun for Minari – but it just goes to show you how slow the gates have been opening and how gradual that process has been.

“We’re still at a place where everything is a ‘first’ of something, and it’s almost become a running joke within our community, like, ‘OK, what’s this the first of now? Crazy Rich Asians: the first romantic comedy [feature film] featuring an all-Asian cast. And this is the first of this thing.’ We’re really looking forward to the time when all of the firsts are out of the way and you start to go into the second, the third and the fourth. While it’s important to celebrate those benchmarks, that’s when you’re really going to start to drill deeper into these stories that will hopefully shed some light into our identity, our stories and our culture.”

To that end, Liu is now an ambassador for MADE|NOUS, an initiative that aims to shine a spotlight on Canadian talent in film, TV, gaming and digital entertainment, backed by the Canada Media Fund, Telefilm Canada and more than 30 broadcasters, distributors and producers in a bid to celebrate homegrown storytellers.

Its latest campaign, Seek More, is designed to amplify the range of diverse voices in Canada and recognise and celebrate their work, from global superstars like Ryan Gosling and Ryan Reynolds to up-and-coming local talents.

Liu spoke about the campaign and the importance of championing inclusion and diversity at this year’s Banff World Media Festival, where he collected the Canadian Award of Distinction after being named among the 2021 Rockie Award Gala recipients. But it was not so long ago that Liu himself was still trying to break into the industry, before roles in Canadian dramas Omega and Blood & Water led to him appearing in series such as Taken, Fresh off the Boat and The Expanse. Then, in 2016, he joined the cast of comedy Kim’s Convenience, about the misadventures of a Korean-Canadian family running a Toronto convenience store.

“If you spend any time in Canada, what we really pride ourselves on is our commitment to multiculturalism and diversity and making every Canadian feel welcome,” Liu said at the event. “It’s not perfect. Like any country, we have a lot of work to do, both systemically and personally. But I would say that shows like Kim’s Convenience are a big part of that kind of multicultural fabric.”

However, the cancellation of Kim’s Convenience earlier this year led to a row over just how representative the show had been of the Asian-Canadian experience. The series had originally been renewed for fifth and sixth seasons in 2020, but broadcaster the CBC then confirmed in March this year it would end after S5.

“Authenticity of storytelling is at the centre of the success of Kim’s Convenience. At the end of production on season five, our two co-creators confirmed they were moving on to other projects,” a statement posted on the show’s Instagram feed said. “Given their departure from the series, we have come to the difficult conclusion that we cannot deliver another season of the same heart and quality that has made the show so special.”

Then earlier this month, Liu, who played Jung in the series, published an extensive Facebook post criticising the decision not to extend the show and outlining some issues that played out behind the scenes. These included his increasing frustrations at the way his character was shaped by producers who were “overwhelmingly white” and the lack of involvement the Asian-Canadian cast had in developing storylines with a writing team that “lacked both East Asian and female representation, and also lacked a pipeline to introduce diverse talents.” Apart from Ins Choi, who created the series with Kevin White based on his own play of the same name, there were no other Korean voices in the room, Liu said.

Fellow Kim’s Convenience star Jean Yoon later backed up Liu’s comments, Tweeting that “the lack of Asian female, especially Korean, writers in the writers room of Kim’s made my life very difficult and the experience of working on the show painful.”

In a statement issued in response, the CBC said: “Respectfully, it’s not our place to speak on behalf of the producers or cast members of Kim’s Convenience.” The pubcaster is now working with Liu on Hello (Again), an original series for streaming platform CBC Gem that the actor co-created with Nathalie Younglai. Kim’s Convenience producer Thunderbird Entertainment has declined to comment on the issues highlighted by the show’s stars.

Liu says his complaints stem from the imbalance of power in productions where the actors often have a greater lived experience of their characters than those in the writers room.

“I don’t want to point any fingers or call any names, but I remember feeling like I didn’t have a voice and I shouldn’t have a voice, that I should just be grateful and not be difficult,” he says. “And that kind of overarching feeling is an age-old narrative of the relationship between people in power and those without. Those without power are being told to constantly be grateful for what they have and to not ask for more. But we’re here to ask for more. We’re here to seek more, in fact, and that’s certainly what I hope people who follow Kim’s Convenience do.”

His experience working on Kim’s Convenience, which is available around the world on Netflix, could not have been further from his role on Shang-Chi & the Legend of the Ten Rings, where he was “invited to the table” to give his thoughts on the story and the characters in what will be the 25th entry in the MCU.

“For [Marvel Studios president] Kevin Feige or Jonathan Schwartz, our creative producer, to defer to Dave Callaham, our Asian-American screenwriter, Destin Daniel Cretin, our Asian-American director, or myself, an Asian-Canadian actor, and for them to listen to what we have to say and what our thoughts are on the story, it takes real foresight and real intelligence,” Liu says. “Everyone will agree it made the project better. We were able to give notes, whether it was on character or story or structure; we were able to make the project better.”

That’s how collaborative Liu believes filmmaking should be. “I just feel like on Kim’s Convenience we kind of fell short of that in some instances,” he says.