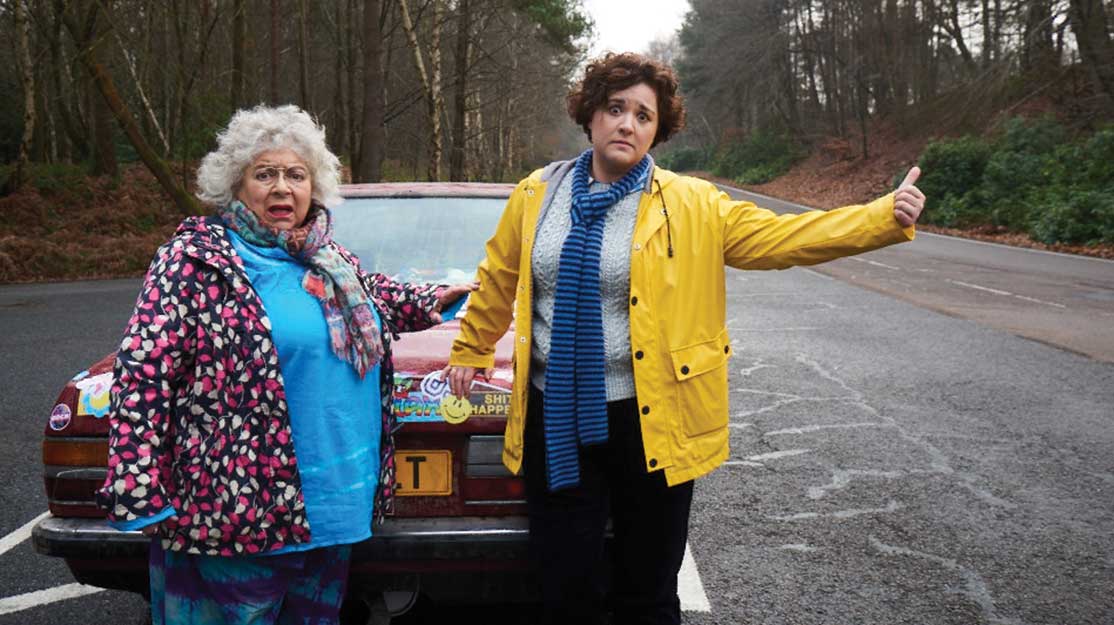 Bucket is a bittersweet series about a dying mother who embarks on an ambitious road trip with plans to tick off a preposterous bucket list, and her daughter who has no choice but to go along for the ride. Here, writer Frog Stone, who also stars with Miriam Margolyes, reveals the inspiration behind the four-parter, produced by Solution 3 with Company Pictures for BBC4 and distributed by All3Media International.

The story of this show began with another idea entirely. But then real life got in the way and everything changed.

I had finished a film in the US and during the typical actor’s post-shoot slump I posted on Facebook that I feared never working again unless someone made a Miriam Margolyes biopic. My height and hair made me a shoo-in, right? I’d sold scripts before, so maybe I should even write it, I thought. It was as a private joke but then TV producers picked up on the idea. After a wonderfully fun lunch pitching my ideas, the legend that is Miriam was on board. Then came the commissioners with enthusiasm and backing, and soon I was writing a script. Then my father died.

Dad had cancer and died within three months of diagnosis. There was no big reconciliation, no meaningful talks and suddenly no time left to mend our tricky relationship. He was very frightened and angry. So was I. Things were easier when we avoided the big stuff and chatted about doing one last trip to his beloved Lake District. We never made it. But stories give everyone a second chance. And so Bucket was born: two characters struggling with life, death and each other on the pot-holed road to wish fulfilment.

I must say, the similarities to my life and family end there. Mim [played by Margolyes] and Fran [Stone] are their own distinctive characters but I think everyone will recognise the sweet-and-sour dynamic of parent-child relationships. I wanted to bring the personal and generational conflict to screen, as we rarely get to see complicated, flawed women like this. Love and fury, that’s real life; funny, painful and without a fixed genre, an age limit or a dress code. Fran is a repressed 30-something scared to start life and Mim is a feckless baby-boomer outraged that life might end. They are both frustrated but forever bonded. The two women are unique but it’s a universal experience. We’d all like things to be better, we all make a mess of it and that’s both very sad and very funny. Life has this unknown expiry date and Mim says: “What are we going to do about it? Carpe bloody diem, that’s what!” Fran is dragged along fearing the worst, but it’s the best thing that could happen for them both. Ticking items off the ridiculous bucket list begins an emotional journey, too.

But there’s never going to be a Hollywood ending for Fran and Mim. As my comedy hero, the genius Victoria Wood, wrote: “Life’s not fair, is it? Some of us drink champagne in the fast lane, and some of us eat our sandwiches by the loose chippings on the A597.” There’s a lot of that bathos in Bucket. Although I’ll never match her, like Wood I’m from Lancashire. Stephanie Beacham, who plays cousin Pat, told me I write “Northern.” I took it as a compliment. I think it means to yo-yo from the sublime to the ridiculous, find the light in the bleakness and moan about it too. (FYI, Stephanie Beacham can always find her light.)

The scripts enticed a terrific cast and we had a wonderful team on both sides of the camera. It was a real labour of love working on a tight schedule and moving from silly to solemn on a sixpence in the coldest weeks of the year. I made septuagenarian Miriam Margolyes strip off in sub-zero temperatures, but I gave her all the best jokes too. The serial element makes Bucket a little different from other comedies; there’s a chance to laugh, scream, sigh and, I hope, reflect too before we hit the brakes and leave Fran and Mim on a cliffhanger. The journey is never straightforward with these two, but unlike real life, I do know what happens next.