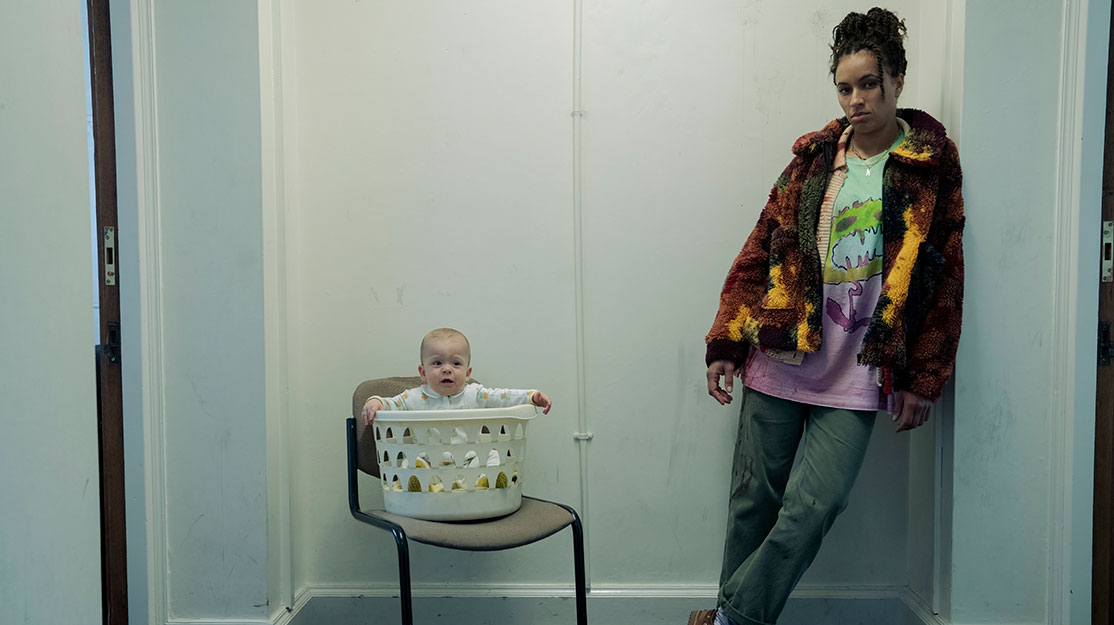 Bringing up The Baby

Lead director Nicole Kassell discusses making Sky and HBO comedy horror The Baby, the show’s mash-up of genres and why it gave her the hardest challenge of her career.

As a director, Nicole Kassell has helmed feature films including The Woodsman and episodes of acclaimed series such as The Leftovers, The Americans, Westworld and Watchmen. Yet it is a new horror comedy about one woman’s sudden brush with motherhood that delivered the hardest challenge she has ever faced.

Kassell is an executive producer and the lead director of The Baby, an eight-part series that serves up an examination of motherhood from the perspective of a woman who doesn’t want to be a mum.

Michelle De Swarte (The Duchess) stars as 38-year-old Natasha, who is furious that her closest friends are all having babies. But when she becomes a mother herself, in the most unexpected of circumstances, she finds her life turning into a surreal horror show thanks to her controlling, manipulative yet extremely cute baby. When her attempts to get rid of the infant become increasingly desperate, she discovers that although she doesn’t want the baby, the baby definitely wants her.

Produced by Sister (Chernobyl) and Proverbial Pictures for Sky and HBO, the series was created by producer Lucy Gaymer and head writer Siân Robins-Grace, who wrote a pilot script that blew Kassell away when she first read it.

“It was profoundly original. I’d never seen anything like it,” she tells DQ. “And I loved the mixture of tone and genre and really appreciated that it was tackling very real, complicated subject matter. It hit everything I look for in a project right out of the park in terms of a personal connection to it as a mother and a friend who has navigated motherhood, politically, and then also visually. Fireworks were going through my mind as I read it.”

As her career so far attests, Kassell is a director who loves working in different genres. “If I direct The Woodsman and then The Killing, I’m also excited to direct something like Claws or Watchmen, where I do not want to be put in a box in terms of what I can do visually or tonally,” she says.

“As I’ve moved into the realm of being able to choose the projects I board as a pilot director, which is much more like approaching a feature film, my happy place is where I’m part of the original DNA of the show, hiring the crew and being a part of the thing as a filmmaker. That’s what I love about the whole medium from early pre-production through the final post-production.”

The Baby certainly brings something new to a television landscape continually flooded with new series, from its dark humour to nightmarish horror. Kassell describes the show as The Shining meets Raising Arizona – “a crazy mash-up” that also adopts influences such as Coen Brothers films No Country for Old Men and The Big Lebowski.

“But no matter how insane the scenario, I get very grounded, real performances,” the director explains. “It’s very important to me to 100% believe the world we’re in, whether it’s The Leftovers, Claws, Watchmen or The Baby. I need to connect with it. You have to believe it 100% for it to be very effective. And I’d say that’s what I’ve come to understand. That’s why writers come to me with often wild scenarios, because they know I’ll find a grounding to it.”

In The Baby, De Swarte provides the grounded performance around which the rest of the show revolves, as Natasha is unable to understand how she has ended up with a baby and why her friends and family simply accept the infant is now part of her life.

“Well, she’s amazing. She’s an extremely talented woman,” Kassell says of the star, who won the best actress award at French television festival Series Mania following The Baby’s world premiere earlier this year. “She has not done a lot of acting and so I made sure to give her the tools to pace herself [filming the series].

“Then on set, we built Natasha’s apartment, so once it was dressed, I brought her in early to walk her through it to make sure she started to feel at home and to check whether there were any personal things she wanted. In the same way you work with the costume designer as they put on the skin of their character, where somebody lives and works is a similar thing and I want to get them in there and put on that layer of character.”

At the start of the series, Natasha isn’t particularly likeable, with her desire for a carefree evening with her friends upset by the demands of parenting. Kassell says it isn’t important that viewers immediately like Natasha, just that they like her enough to want to watch how the series plays out.

“She’s clearly a train wreck, but she’s also clearly the life of the party. She’s a fun friend, but she’s also being a bit of an arsehole – and I love that her friends are calling her on it,” the director notes. “She’s a flawed lead character, but people are excited to see that, and it’s refreshing.”

It’s not long before Natasha has to share the screen with The Baby’s other star – the baby, who is played by a pair of identical twins. Working with the show’s young cast members is what Kassell says is “honestly the hardest thing I’ve ever done, and I never, ever thought this pilot would be the hardest thing I’ve done.”

Almost immediately, the baby’s mere presence leads to tragic ends for characters who intend to take him away from Natasha. She then starts to investigate the baby’s past and his other ‘mothers’ when she discovers the fate of one young woman.

Kassell praises the “amazing team effort” that went into getting the cheeky, sweet yet often tearful performances from the twins, noting that having the infants on set “just affected everything. You shot and scheduled around who was in a mood and who needed a nap, and we meticulously planned every day, which I always do. But then as much as we’d planned it, we truly had no idea what the day was going to bring.

“There were these moments when they’d be delivering [perfect performances] and it was just a miracle. Then there were days where they didn’t, and we had to really go into problem-solving mode. The team we had just planned for all the problems that could come to be able to keep moving and not freeze on set with what to do.”

The crew’s entire approach was camera first, visual effects later in the event that they couldn’t get the desired performances at a certain time, while reshoots were a fallback option. “One of my most vivid memories is our very first filming day,” Kassell says. “The very first scene we filmed was when Natasha’s driving the baby in the car for the first time [in episode one] and he’s just looking at her. That was our first shot, our first setup, and the baby did that. We got one take. After that he fell apart, and his brother also.

“It was extremely challenging, but so rewarding – and I send my gratitude to the parents and the baby minders. They just they just did a brilliant job of being really supportive in a very challenging situation.”

A pre-titles sequence in episode one sets the scene for The Baby’s dark tone and twisted humour, with two police officers chasing a woman through a pitch-black forest. When she stops at a cliff edge, it is revealed she is carrying a bag with a baby inside. Despite the officer’s protests, she falls over the edge – and the baby follows. Viewers are initially led to believe he has been caught just in time, but the officer only manages to catch the baby’s knitted sock. It’s those events that later lead the baby to fall literally into Natasha’s arms.

From the start, Kassell says she wanted the opening to be “really scary.” She continues: “I just adore the moment when the booty comes up and it’s revealed he [the police officer] didn’t succeed in catching the baby,” she says. “I really approached it honestly. We could have dialled it to much more campy humour, and finding that tone was a challenge in the editing room. But it’s so fun to watch that sequence and feel the tension, and then the ‘no way’ moment and the laughter. It just sets the stage for the show. You’re gonna feel uncomfortable, and you’re going to get scared, but you’re also going to laugh really hard, hopefully.”

Composer Lucrecia Dalt’s unsettling and dramatic score adds another layer to the series, while Kassell also gives credit to Robins-Grace for pushing the team to find an “unexpected sound.”

“Our sound supervisors were also incredible, Pete Saville and Zoë Ellen Bryant,” she says. “Lucrecia came with some ideas and then was also just brilliant at taking notes, and the opening piece says everything. One of my favourite pieces is the one at the very final credits. We had a song in there that was a hard, driving song but we felt like she should take a crack at it. She said it’s not her wheelhouse, it’s not what she’s used to doing it, but she just she killed it. I love listening to her work throughout the series.”

Aside from her episode-one directing duties, Kassell also worked across the series as an executive producer, meeting each of her fellow directors in preproduction to set out the style of the show and acting as a sounding board for the cast and crew. Then in post-production, she would watch any episode cuts that went to the executive group and was particularly involved in the visual effects approval stage, “just because it felt like that was a place where I definitely had more experience than the rest so far in terms of visual effects work,” she says. “That was really great. But I also very much see the directors as doing their own work and so I stayed out of their way and offered them support in any way I could.”

Backed by HBO and Sky, which launched The Baby last week, the series certainly has all the visual hallmarks of top-tier TV to which viewers are now accustomed, from the direction to the visual effects that are used to eye-catching effect, particularly during a dream sequence in episode one. Kassell says she feels very fluid moving between television and film but will always choose a project based on a story-first approach.

“Unfortunately for film, it’s still gravitating more and more to just the big blockbusters, and I wish more medium-sized dramas were seen on a large screen. But that’s definitely not the current trend,” she says. “You see TV moving more and more into the big-budget realm as well, where the demand on quality is extremely high, but there’s also the tension of trying to do this for smaller budgets – it’s the age-old story for filmmakers.”