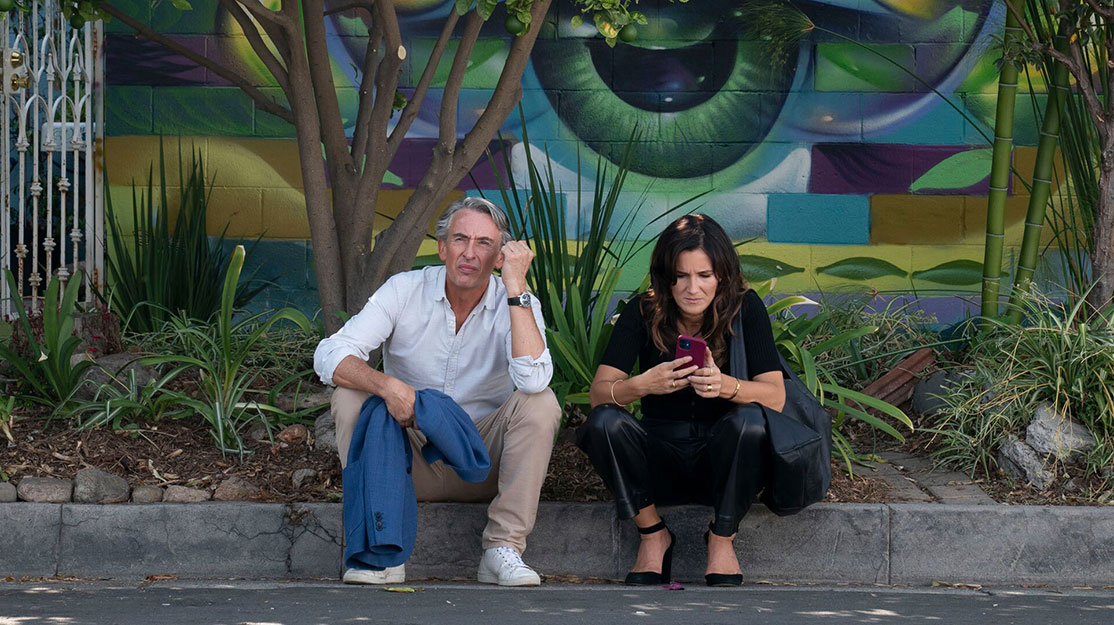 Shooting in Los Angeles for the first time can be a daunting prospect for any UK-based production company. Throw a pandemic on top of that, replete with stringent testing guidelines, special visas, budgetary considerations and time restrictions, and you have the makings of a Hollywood nail-biter.

That was the situation for Baby Cow Productions, the London-based prodco led by Steve Coogan (Alan Partridge, Philomena), as it looked to bring six-part series Chivalry to bear.

The Channel 4 comedy-drama is set in the heart of LA’s film scene, with Coogan playing Cameron, a successful film producer with a reputation as a womaniser, and Sarah Solemani (Him & Her, Greed) playing Bobby, a passionate independent filmmaker.

While the show is set in LA, the majority of the shoot took place at London’s Pinewood, save for a crucial four-week stint (two weeks of scouting and two of filming) in California.

The challenge of moving a production overseas in the middle of a pandemic was significant, but Baby Cow Productions chief operating officer Asha Amster tells DQ that the production team was determined to find its way to LA “by hook or by crook.”

“There were scenes we could do in the UK – that we could cheat or treat or shoot tight, or interiors – but, ultimately, Chivalry is set in the LA landscape,” she says.

One of the central themes and questions of the show is whether filmmakers can build and sustain a successful and relevant career in Hollywood without sacrificing their principles. And to do that, the production needed to capture LA – and lots of it. Baby Cow worked with local production company Jax Media, which provided production services, to secure access to some of Hollywood’s most iconic filming locations.

The first episode of the show was shot partly at the Hollywood Roosevelt Hotel, a classic LA location with “dark and moody interiors” that set the scene for Chivalry’s “exploration of new Hollywood versus old Hollywood,” says Isabel Richardson, creative producer at Jax Media.

Within the world of Chivalry, the male lead character Cameron represents “old-world Hollywood,” while Bobby is “a feminist who’s trying to shake up the rigidity of old Hollywood,” adds Richardson.

In addition to the Roosevelt Hotel, the production also shot on the Universal Studios Hollywood lot. Amster acknowledges that, as a UK prodco taking a project to LA for the first time, Baby Cow needed Jax to “open those doors” to some of the higher-profile locations. Once the shoot on the Universal lot was confirmed, the production team was able to start tailoring what was being shot at Pinewood in London so that everything matched aesthetically.

“We always had an eye on how we could seamlessly flow these worlds together and make them feel like they were the same, because, obviously when we were shooting at Pinewood, we had to be very specific about what you’re seeing and not seeing and what can pass for LA,” says Richardson.

Given that the series is set in the world of Hollywood, it also needed scenes featuring background actors going about their daily business on the Universal lot. The production shot scenes with background actors walking around in costumes, as if they were shooting films on the lot at the same time. Coogan and Solemani’s characters also run into Paul Rudd and John C Reilly (who play themselves), though the cameo from Rudd was filmed in London while Reilly’s cameo was filmed on the Universal lot in LA.

Some scenes also featured the Bates Motel, immortalised in Alfred Hitchcock’s 1960 classic Psycho, in the background – another nod to old-school Hollywood and the desire of Solemani’s character to break away from it.

They also shot at a luxurious house in Malibu, which has long been an LA getaway for the rich and famous. The secluded property, which is Cameron’s second home in the show, is situated on a cliff overlooking the Pacific. He jokes at one point that all the bad franchise movies he has made during his career have paid for the house.

Amster says the opulent Malibu home is representative of the tussle Solemani’s character feels between wanting to shun the glamour and trappings of fame but also being seduced by them. “The location reflects that inner struggle she’s having around authenticity versus commerce,” she says. It’s also the moment when a role reversal takes place, with Bobby shifting towards pursuing more commercial projects while Cameron begins to fight for her to get her dream project – an Iranian biopic – off the ground.

In addition to London, Richardson has shot across North American jurisdictions including Atlanta, Calgary, Vancouver and her home state, New York. When asked about the difference between working in LA versus New York and London, Richardson says one of the most notable differences is the extra space.

“In New York, the logistics of parking trucks and trailers, it’s always a nightmare. There’s nowhere to be,” she says. “And if you’re in the streets in London, it’s a similar thing. You’re really battling crowds, you’re trying to get people out of shots, battling FedEx trucks that pull up into the shot while you’re shooting. LA just feels a little more chill and relaxed, in my limited experience.”

Amster agrees that filming in London has been exceptionally busy for the past 18 months, especially after the bottleneck created by the production shutdowns of 2020.

It’s certainly a boom time for TV and film producers in the UK, she says, but it’s not plain sailing by any stretch. “It’s still a really difficult environment for indies to succeed because, with more platforms, there’s more competition. And in many ways, lots of the tariffs are remaining static even though costs, wage inflation and competition for crew continue to drive prices up.

“So what you get on one side takes away with the other, but it’s a very mixed economy and Baby Cow is thriving.”

Amster adds that the growth of the UK industry, from the increase in the local crew base to the investment in studio infrastructure, has created a “moment” where it “rivals LA production and filmmaking.”

“There was a time when LA was the unrivalled undisputed home of TV and film, and I do think that is being balanced out a bit at the moment,” she says.

Baby Cow’s first venture into the LA production market, with the support of Jax Media, has potentially been a game-changer for the UK prodco, adds Amster: “The access to talent, access to crew, amazing locations… we would definitely go back to LA. Moving into the US is a big part of Baby Cow’s strategy moving forward, so I’m sure there will be many more opportunities to film in America in the future. “