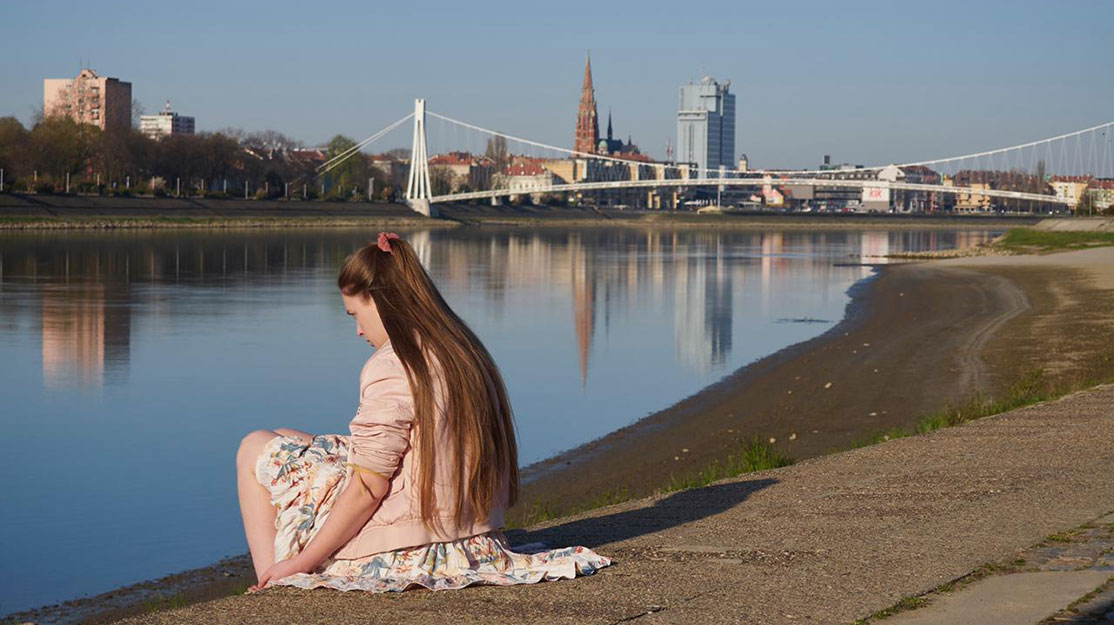 Director Dalibor Matanić and actor Kseniia Mishina talk to DQ about Šutnja (The Silence), a crime drama based on real events and set between Croatia and Ukraine.

Šutnja (The Silence) opens with the body of a young girl washing up on a riverbank. As an investigation begins, a police detective, a reporter and the wife of a rich and powerful man are drawn into a case that explores the tragic consequences of human trafficking and sexual abuse.

The six-part drama is based on a true story and unfolds between Croatia and Ukraine. It has been adapted from Croatian journalist Drago Hedl’s book of the same name, one of a trilogy of novels set in present-day Croatia and Ukraine that focuses on trafficking and the weapons trade in Eastern Europe.

Screening this week at the Berlin International Film Festival, as part of the Berlinale Series Market, The Silence is produced by Nebojša Taraba, Miodrag Sila, Vladyslav Riashyn, Nadia Rekhter-Gareva and Rita Grebenchiko.

Tell us about the story of The Silence.
Matanić: The Silence is about the investigation into the death of a girl whose body was found in the small town of Osijek in Croatia. The story follows the police, a journalist and a rich woman. One investigation leads to another, and slowly a bigger case of sexual abuse of teens opens up. We try to follow the train of evil that starts in Kyiv, Ukraine, stops in Osijek, Croatia, and then goes to the west or east. In short, The Silence is a story of fighting against evil.

Why did you want to direct the series?
Matanić: Unfortunately, The Silence is based on real events that happened in Croatia. It was a national shame, but everybody was silent about it. The author of the book, Drago Hedl, first wrote articles about the case, and they caused lots of reaction. But a week later, there was silence. Then he wrote three books about it, which also sparked reaction – and then silence. Now we are hoping that, with this TV series, we will end the silence about this topic.
It was challenging to enter the crime genre because everybody knows everything about crime stories. You can find them anywhere in the world. I was curious about approaching it from this part of Europe with some of my Asian influences. I wanted to find a different rhythm, a different kind of tension and a different kind of uneasy feeling. It was very challenging.

Kseniia, tell us about your character, Olga.
Mishina: The Silence is a powerful and complex story about human trafficking and sexual exploitation. Many people know little about these terrible things that are happening today, very close to us.
Given the topic, my role is complex too. I play Olga, the wife of a millionaire and a philanthropist who runs a charitable foundation. Olga reveals her strength and willpower when faced with difficult circumstances that come into her life – and she choses to fight. She is generous no matter what, and there is always room for love in her heart. I see her as a positive character.

Why were you interested in starring in the show?
Mishina: I was attracted by the script. When I learned that the story is based on true events, it became doubly interesting. Stories like this should resonate as widely as possible. I was also attracted by the character. She shows willpower, courage and generosity in all her trials and hardships. That commanded respect and impressed me very much.

Olga’s niece disappears in the series. How does she react to this?
Mishina: She quits her work and starts her own investigation. No matter what, she is ready to go to the end in her quest for the truth. The path leads her from Kyiv to the quiet Croatian city of Osijek, where a predatory criminal conglomerate lurks behind a peaceful façade. It turns out that Ukrainian girls are kidnapped and sold to European brothels. In her investigation, Olga is assisted by a local journalist and a policeman who are ready to risk everything in order to obtain justice.

Dalibor, how did you work with screenwriter Marjan Alcevski?
Matanić: I have nothing but compliments for Marjan. When there is no ego from any crew member, creativity can flourish. My system is that we have a creators’ room for the producers, the scriptwriter and me, the director. These multiple heads are smarter than one. We did the same thing for The Paper. It’s a much more precise approach that generates better questions, better criticism and better solutions. Marjan fits perfectly in our creators’ room.

Kseniia, how did you prepare for the role?
Mishina: Learning Croatian was a major challenge. I had very little time. I came to Croatia to meet my language coach and to analyse the scenes – I had to learn how to speak Croatian in just two weeks. It was necessary to not only know the dialogue by heart but, more importantly, understand what I was talking about. We practiced almost every day. To be honest, it was a real miracle that I coped with that, but I had the support and faith of the director, the producers and the entire project team, and I had cool coaches in Croatia.
At first, it was scary and it seemed to me that it was just impossible to make my Croatian pronunciation perfect in such a short time. However, in the middle of the shooting, I was so immersed in the atmosphere of the story that I was able to learn lines right on set. The result was worth all the worry and anxiety.

What was your experience like on set?
Mishina: The director created a very comfortable atmosphere on set, while keeping control of everything at the same time. The entire team that worked on The Silence are hard workers and truly passionate about what they do. This can’t help but make one fall in love with them, because working to such tight schedules is quite difficult. We worked almost non-stop and there were many night shoots. But they are really obsessed with their profession and did not get tired. Dalibor’s energy is inextinguishable. The director sets the pace and the whole team follows.
I believe the key to the success of the project lies in this approach – mutual understanding and friendship with the director are very important and affect the entire crew’s quality of work.

Does the series have a particular visual style?
Matanić: It sounded crazy at the beginning, but two years ago in Berlin, I promised some guys from Netflix that I would create something called ‘bright noir’ for The Silence. They didn’t want Scandinavian noir anymore, so I thought about bright noir, like in Twin Peaks where everything is very shiny and very positive, and then you have crimes. That’s more interesting for me, because I’ve seen lots of this dark, gloomy kind of noir. So we did it and I must thank our partners – Beta Film, Star Media, everybody involved – because they gave me complete freedom to establish this visual style. It really helps the story – you don’t expect evil when there is sunshine.

How did you want to film the series and what techniques/equipment did you use on the show?
Matanić: I have a freestyle system where use a camera in the street. We are among the cars, among the people, like real life. Of course, it was challenging when Covid-19 was all around, but we still managed to film the series. I wanted it to be raw – I wanted to be among the people because then the audience trusts us. I have a handheld camera and the DOP must have a camera on his shoulder, and the two of us are going among people, out into the streets together.

What challenges did you face making the series?
Matanić: From the beginning of the pandemic, all productions faced the same challenges, and it was difficult to travel from Croatia to Ukraine. But we were lucky. We came to shoot in Ukraine after the lockdown, so it was a good thing. That was the first challenge. All the other challenges were about how to combine the actors from one country with the others, how to combine productions – but it was perfect. We did not have any problems, and everybody knew what they were doing. It was a kind of harmony in the time of a pandemic.

Do you have any favourite moments from filming?
Matanić: One of them is when we were in Kiev shooting a ball, in this big round hall with people all dressed up. There were some girls and one of our actors among them doing old Ukrainian folk dances. It was beautiful to see these girls dancing and to hear old songs from Ukraine. Also, when we were doing a scene hunting for a bad guy in Croatia, we did it in a swampy in a part of the country. When we were shooting, all these animals, such as wild pigs, were surrounding us and just watching what we were doing.

Mishina: From the very beginning, I was shocked by the number of scenes in Croatian I had to learn by heart. The emotional component was also heavy, because of the show’s topic. We raised a pressing social issue and my role was very dramatic, serious and full of profound meaning, and I tried to convey it as best as I could in order to reach the hearts of the audience. The most difficult thing was to perform emotional scenes and repeat them for 25 takes, with the maximum emotional delivery every time.

Why do you think audiences will be drawn to Olga and the story?
Mishina: Most people are light years from the subject of human trafficking, so they don’t even think about it. Before our project, I did not think about it either. Such issues must be highlighted. It is precisely because this story is based on true events that I’d recommend everyone watch The Silence. We must raise our children properly, explaining to them the dangers existing in this world and fighting these dangers to the best of our ability.
Olga will attract viewers with the evolution that occurs in her, from a victim to a strong personality. Despite various hardships and trials, Olga finds her feet and ceases to be a victim.

What are you working on next?
Matanić: Slowly, producers Miodrag Sila, Nebojsa Taraba, writer Marjan Alcevski and I are preparing the ground for The Silence season two. This is our main goal besides other projects. Now we have established The Silence, it’s time to continue.