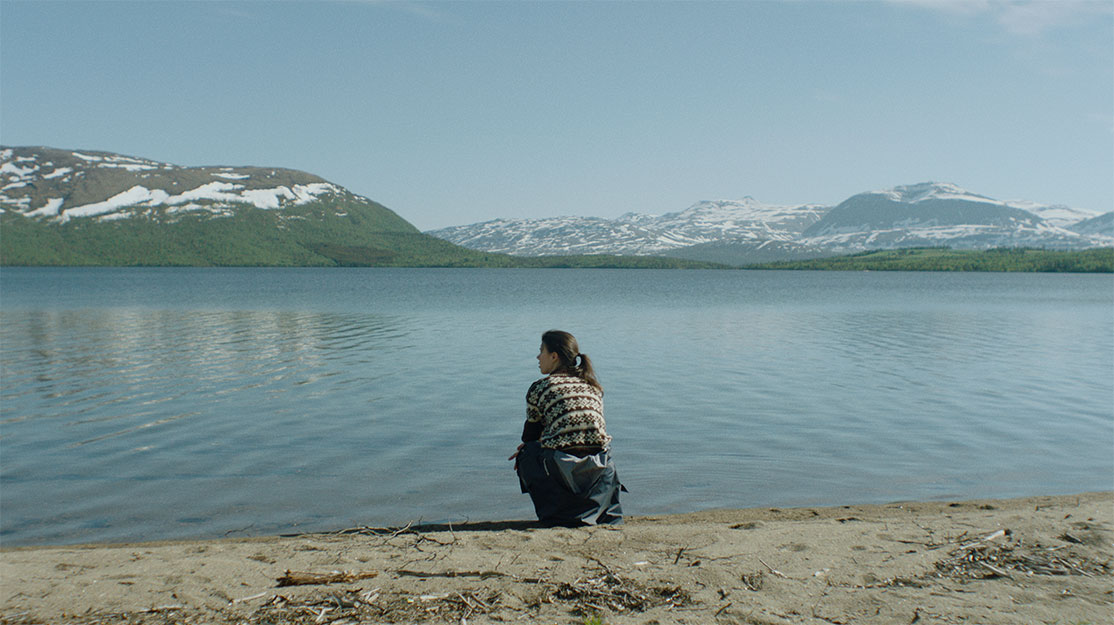 The vast Arctic landscape sets the scene for Outlier, in which a young criminology student starts the hunt for a potential serial killer. Arne Berggren and Kristine Berg tell DQ about creating this Norwegian crime drama.

With the launch of services like Lovefilm and Netflix, films and television series were once delivered on DVD through the post with your morning mail. And for more than a decade, Amazon Prime Video has linked the latest blockbusters with free delivery on your shopping. Now, why not tune into the latest Nordic crime drama using your newspaper subscription?

When it debuted in Norway in December last year, eight-part drama Outlier was bundled into the subscriptions held by readers of around 80 local newspapers across the country owned by media company AMedia, being made available to view at varingen.no.

“They are very creative in finding new ways to distribute news and very good at subscription deals in the region with people all over Norway, and Outlier was a test to distribute TV drama within that system,” explains Arne Berggren, who co-created, wrote and directed the series together with Kristine Berg. “Together, it was quite successful and it was a new way to distribute drama.

“For AMedia, it was their first drama commission and we got the freedom to do whatever we wanted. They liked it because it was so based in the north [of Norway]. Working with traditional broadcasters can be a slow process, with 10 or 15 people giving you notes all the time. We thought maybe we should do it another way this time and try a new player in the business. It was quite interesting.”

The series, which subsequently enjoyed its international premiere at Berlinale in March, follows a criminology student who returns to her home town in Northern Norway to join the investigation into what turns out to be a serial killer.

In the middle of the night, teenager Elle Jannok is on her way home from a party when she finds a cell phone ringing. The phone belongs to a missing girl Sofie, whose body is discovered a couple of days later in a caravan.

Maja Angell (Hanne Mathisen Haga) is in London defending her controversial thesis about criminal profiling when she hears about a murder in her old home town. Despite being warned not to go, she leaves university to travel north and deliver a message to the local police: the man charged with the murder is not guilty. With no one willing to listen to her theory, Maja delves into her repressed childhood memories to find the killer and soon realises they are closer than she ever imagined.

Berggren describes Outlier as a slow-paced series that sought to reflect the way of life enjoyed by the Sámi people who live in Norway’s north. From the outset, he and Berg wanted to tell a story about this culture and not simply use the environment as a backdrop for a show that could have been set in the capital, Oslo. They also employed cast and crew from the region, with cinematographer Ken Are Bongo on directing duties alongside the long-time writing partners.

“People engaged with it because of that. People up north and in the Arctic love it because they can relate to it, and that’s the most positive feedback we could get,” Berggren says. “People in the region recognise the characters, the slow pace and the investigation style of the police. They are used to production companies trying to create stories with the Arctic as a background, but they don’t see themselves, so the best feedback we could get was that they could recognise themselves and their own surroundings.”

Having previously collaborated on series including Dauinger, Hotel Cæsar, Elven and Rekyl, Berggren and Berg prefer to work away from the relative metropolis of Oslo and in Norway’s more rural regions, where they can find new locations to set their stories.

“You have the exciting and challenging possibilities with the light,” Berggren says. “It’s either daylight for 24 hours or totally dark. That triggered some new storytelling, and we have to find solutions for productions. It was creatively challenging, so we fell in love with the region and established a production company, Shuuto Arctic, there to give crew, photographers and writers more experience so they don’t have to go to Oslo to work in the business. That was the main reason why we discovered thrillers and stories from the north.”

Outlier, explains Berg, is a series that speaks to being a police officer outside of a big Norwegian city. “There’s a big discussion about it in Norway,” she says. “It’s difficult; they have a lack of resources and manpower, so it was interesting to dive into a different type of conversation than we have here in Oslo. It was interesting to do the research and discover people up north or outside of Oslo don’t get the same treatment as people in the big cities because it’s difficult to investigate crimes there. People up north were happy we told a story about it.”

Berggren picks up: “You have this myth about Norway and a social democratic society where everyone, regardless of where they live and who they are, should be treated equally as in Oslo. People expect that when you call the police because someone is breaking into your house, they should respond within 20 minutes as in Oslo. But up in the north, it’s four hours’ drive to go to the crime scene so, of course, they are very relaxed when it comes to what to prioritise. We thought it was very interesting to build a story around how it is to be a police officer when they have a patrol area 10 times the size of London.”

It’s in London where the story introduces Maja, who isn’t convinced that the local police have caught the right person for Sofie’s murder and uses her interest in criminal profiling to link several similar cases.

“She starts to dig around and, slowly but surely, she discovers other cases and starts to unravel a case of a potential serial killer,” Berg says. “In Norway, we say serial killers don’t exist. Serial killers only exist in other countries. But when you look at the statistics and the way the police work, you can say that’s a bit naive because they don’t have a system for connecting the dots. Maja has a different view of things and discovers cases that have something in common.”

With roots in the psychological thriller genre, the story also leans into Maja’s personal life as she faces demons from her past that will also become a key to solving the case.

“That was part of the fascination with an investigator like Maya, who goes into criminal psychology after something in her past triggered her interest in serial killers,” Berg notes. “Maybe it was abuse, an incident or a crime she experienced, but there’s something she experienced that is directly relatable to the serial killer. They have an interlinked story from the past.

“She also experiences a struggle with the local police because she’s a woman and the local police chief is a man. It’s a constant struggle but, during the season, they start to investigate the cases together because they realise she has a good point.”

Notably, Outlier is not a whodunnit, as the identity of the killer is revealed early in the series. The disclosure further serves the show’s roots in psychology as viewers follow Maja on her journey to discover why the culprit is committing these horrific crimes.

Having worked in film and television for more than two decades, it was Berggren who gave Berg her first job in the industry as his assistant about 15 years ago. Her first credits then came on horror series Dauinger, in which she answered Berggren’s call to help complete an episode.

“It was annoying because her writing was so clear and precise,” he jokes. “I had to admit she was as good as or better than me and, from that point on, I had to let her more into the process and storylining.”

They then worked on Norwegian soap Hotel Cæsar together, producing more than 400 episodes in two years. It was an experience that cemented their writing partnership and led them to establish Shuuto Arctic, which produced Outlier in coproduction with FilmCamp. Denmark’s Reinvent International Sales is the distributor.

“We try to have a rigid process but the truth is it’s always a bit chaotic,” Berg says of their writing process. “We outline at a quick pace. We developed and wrote it and went straight into production. We wrote it mostly together, but on other shows we do it differently. We have a bigger writers room and the process is a bit more rigid than on Outlier. On Outlier, it has been a very organic process and a quite interesting process to shoot something in the midst of this pandemic. Everything has been quite different this time.”

Setting a series so far north threw up a unique challenge for the writers as they pondered how to show the passage of time through the series in an environment with so much daylight during the summer months. On set as directors, Berggren and Berg encouraged the actors to improvise, adjusting the camerawork as they went and taking turns to speak to the cast or sit behind the monitors with the DOP.

“We are not the kind of writers who do big character bibles and backstories. We love to meet with the actors and let them do what they want to do. It’s a very relaxed set we are running,” Berggren says. “We like to discover things with the crew. It’s a very flat [hierarchal] structure, so we will ask everyone –  the prop guy or the production assistant – what they think. It’s very collaborative work and because we work very lean, with 10 to 15 people on the team, we are quite flexible.

“We also like the challenge of going into real locations without moving anything. It’s very rare that we use a production designer. We like it to feel as it is, so we don’t take much time to prepare each location. We like to be surprised. If the dishes are on the table and it looks like a mess, we use it as it is. That’s part of the good feedback we’ve had from people in the region, that it looks authentic and doesn’t look designed by someone from the big city.”

While Outlier might not escape being labelled as the latest Nordic noir series, the Norwegian drama does offer something new in its protagonist, who Berg believes is a different kind of heroine for the genre.

“Maja’s not a police officer, she’s something else and her personal story is different from many other shows,” she says. “And the authentic scenery from the north of Norway is something we haven’t seen presented this way.”