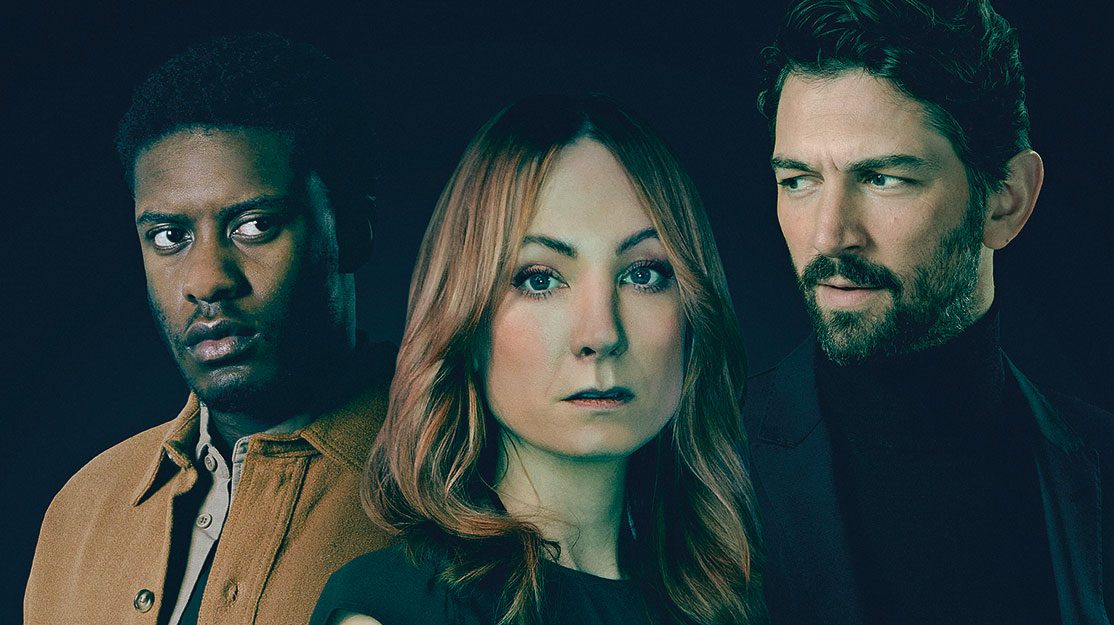 In Angela Black, star Joanne Froggatt reunites with Liar writers Harry and Jack Williams for a Hitchcockian psychological drama about a suburban housewife whose life is not what it appears on the surface.

Froggatt plays the eponymous Angela, who lives in a beautiful house in suburban London, volunteers at a dogs home and has two wonderful sons and a charismatic, hard-working husband (Michiel Huisman). However, what the world doesn’t know is that Angela is also a victim of domestic violence.

Olivier is controlling and brutal, but Angela’s love for the father of her children leaves her using make-up to cover her bruises and making up lies to account for her missing teeth.

When Angela is approached by private investigator Ed (Samuel Adewunmi), she learns about Olivier’s darkest secrets. But can she trust Ed, and what is the truth about Olivier?

Produced by Two Brothers Pictures for ITV in the UK and US streamer Spectrum, the six-part series is directed by Craig Viveiros (Rillington Place).

When writing Angela Black, Harry and Jack Williams were inspired by the #MeToo movement and stories of abuse of power that have become more prominent in the national conversation.
Hammond: But as we dug into it, we realised stories like Angela’s really aren’t that often in the drama space. It’s also inspired by Harry and Jack’s lifelong love of Hitchcock films. Throughout this drama, you can see it’s in the tone of it. But when we were starting to put it together and when they were starting to write a story, they felt a story like Angela’s told through that lens would be really exciting and really interesting just because Hitchcock’s the master of imbuing every small domestic moment with danger.

The writers began working on the scripts, but it was only when Froggatt joined the project that Angela came to life.
Froggatt: I hoped I would work with Jack and Harry again because I had such a fantastic experience working with both of them on two seasons of Liar. We’ve kept in contact. I really enjoy the way they put a team together as well, and I obviously love their stories and their writing. Out of the blue, they sent me the first three episodes of Angela Black and, when I started reading it, I couldn’t put it down. That’s always the best way for me to tell if I want to do a job. If I literally can’t put the script down, then I’m like, ‘Yeah, I’m in.’
Jack and Harry write these incredible twisty, turny thrillers that also have these underlying issues. They really get the levels right in terms of making it an exciting piece of entertainment but also having something more important to think about running alongside it.

What interested Froggatt about Angela was the character’s journey to finding her strength and her voice.
Froggatt: When we meet her, she’s seemingly living this perfect life and she’s got this lovely husband, this lovely house, these lovely children. From the outside, everything’s dreamy. But you scratch the surface and there’s so much more going on underneath. It was nice to go on that journey with her, finding her own mind again, finding her way through this next stage of her life and finding her voice and her strength to fight her own corner again.

Similarly, Huisman signed up after reading the first three scripts and becoming hooked on the “edge of your seat” thriller. Coming off the back of HBO’s more comedic thriller The Flight Attendant, he was also excited to play a character in a series that is completely different in almost every respect.
Huisman: Where The Flight Attendant was very bizarre and surreal, I knew this was going to be a very different experience on set working with Jo, Sam and Craig. This would be much more raw and under my skin. Coming off something like The Flight Attendant, I was ready to do something that was going to dive a bit deeper like this show.

Meanwhile, Adewunmi’s character Ed is very much an enigma in the early stages of the show.
Adewunmi: When I first picked it up and met Ed, I was like, ‘Who’s this guy? Who’s this random person that’s just come into this poor woman’s life and is trying to turn it upside down?’ My initial reaction was just one of intrigue and being taken in by this character and what his motives were and trying to understand where he sat in the whole show. Unravelling that journey and getting to know him in a more intimate way was a fun process.

Viveiros had previously read scripts by the Williams brothers but, for various reasons, had never actually partnered with them on a project. When he read Angela Black, he was intrigued by the way each episode felt like part of a different show, its blend of genres and how it tapped into topical issues that should be pushed into the spotlight.
Viveiros: That’s part of what the show does, it’s just showing people that, actually, you are not alone. Angela’s plight is one that many women are facing. But from an entertainment perspective, it’s like there are two films going on, two pieces of television, two stories. There’s a conversation happening on the surface between each of these characters and one beneath the surface.
Stylistically, there was quite a clear approach as to how to tackle this. It’s all positioned from Olivier’s perspective. He’s essentially the coercive character and he’s controlling everything to do with this family. Throughout the story, you see Angela build the strength to become who she once was and fight the shackles that have been put on her by Olivier.

To prepare for her role, Froggatt read numerous books detailing the experiences of women who have suffered domestic violence. Meanwhile, the producers worked with Women’s Aid, a charity working to end domestic abuse against women and children, to ensure the drama was truthful in its representation of Angela’s situation.
Hammond: You want to make sure you’re never falling into any kind of stereotype. We never wanted to be gratuitous with the violence. We wanted to make sure that often happens off screen, because it’s more about Angela’s experience than what’s physically happening to her. One thing Women’s Aid did brilliantly was read the scripts and advise on them. So not only did they get under the skin of Angela’s psychology and what she would do and how she would behave, but also Olivier’s psychology. What would a man like this do, how would he act and how would he hide it or turn the charm on? What’s he thinking and what’s he going through? That added such a layer of truth to it, which we felt was completely essential.

Huisman: By the time I came on board, all those ideas were already on the page. The challenge for me was probably more to understand why he would do that, because only then could I play it. Even when you’re playing a character who turns out to be a horrible guy like Olivier, I need to sympathise with this guy. I need to understand him. That was my challenge. A lot of that comes from his desire to control of his life, to be in control of his wife especially, and to uphold this perfect picture of success and a beautiful family. When he starts to lose that control is when the demon comes out and he lashes out.

While Huisman admits there were days he would “dread” filming certain scenes between Angela and Olivier, Froggatt has her own way to deal with the emotional impact of the characters’ volatile relationship.
Froggatt: When I’ve got to do scenes where they’re very emotional, there’s this apprehension that sits with you the day before or the day of, and it’s partly the apprehension of having to get yourself into that emotional headspace. In certain scenes, I have to really concentrate. Everyone knows that when I put my earplugs in, that’s my zone.
I just listen to music or something if I’ve got to do really emotional stuff, purely because it helps me concentrate. Then when it’s not that intense, you need to have these moments where you can smile and laugh and enjoy working together as well, because you need the release of it. If you can have a laugh together, you can cry together, you can do all that stuff.

When appearing in a show that tackles such important subject matter, Froggatt doesn’t take the responsibility lightly.
Froggatt: It was a very easy decision [to star in Angela Black]. I read the script and said, ‘Yes, thank you very much.’ But I’m fully aware that to come out of the other side of the job and know I’ve done my best, I have to throw myself into it and make the job the priority for the length of time we’re filming. For that three-and-a-half or four months of shooting, it’s all about doing the best possible job I can and making the show together as a team the best piece of work we can make it. That’s also really exhilarating. When I finish a job and feel like I’ve given it my all, I can then go, ‘OK, great, I’ve done that.’ The rest is up to the viewers.

When it came to shooting the series, there was a common understanding that the violence shouldn’t overtake or sensationalise the story.
Viveiros: Part of what Olivier does that’s so disturbing is his mind games. It’s the gaslighting. It’s the victims of those facets of abuse not really understanding who they are, always feeling that they’re questioning themselves, that sense of persistent self-doubt, which again is the kind of abuse that is so common and why shows like this are really important to really expose those micro-aggressions that become normalised in relationships like this. It’s definitely something we identified from talking to Women’s Aid. We made sure we were staying true to the characters and how they’d react and what their motivations were.

For Froggatt, part of the appeal of the series was playing such a challenging role.
Froggatt: To be offered the opportunity to show a great emotional range and to really get into the psychology of a character is just what you do it for. When they come my way and they’re really well written, I can’t say no.