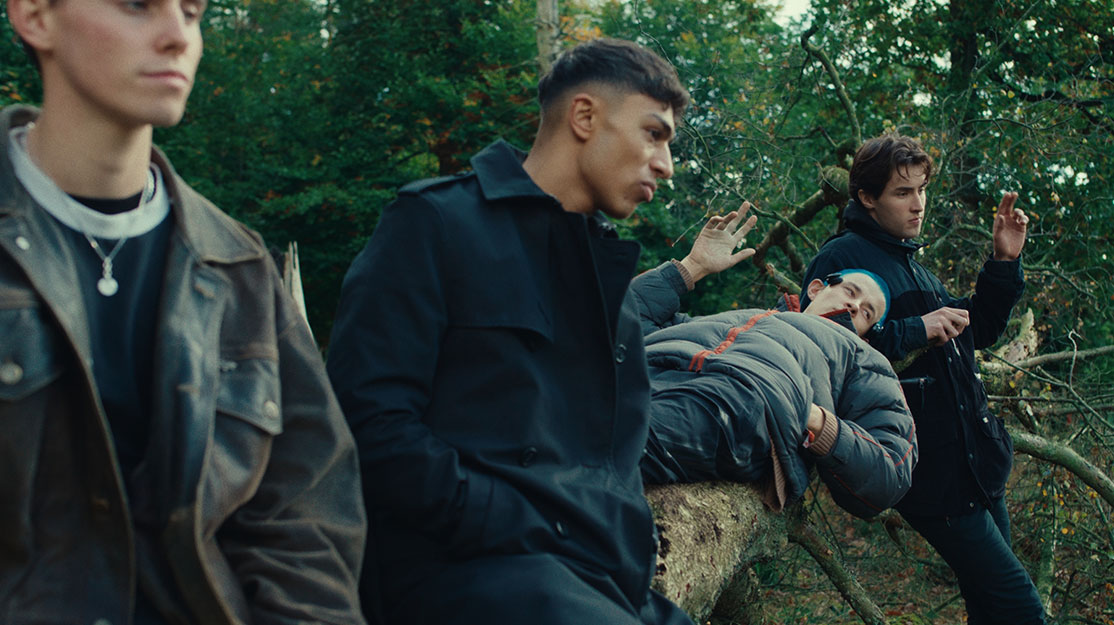 Boys will be boys

Rising Danish director Jonas Risvig speaks to DQ about steering his biggest project to date, Viaplay drama Drenge (Boys), and how he drew on his own life for this story about a group of friends finding their way in life.

The rise of Danish director Jonas Risvig has been nothing less than meteoric. That much was made clear when Viaplay announced last year it had commissioned a six-part series called Drenge (Boys), with 27-year-old Risvig at the helm.

The series made its debut on the Nordic streamer nine months later, and Risvig, now 28, is reflecting on making a show that has brought together adults and the younger viewers who have traditionally tuned into his YouTube shows and music and skating videos.

“Mostly I do series for a young audience, aged 15 to 24, but this time teenagers are watching the series with their parents and that has been really overwhelming,” he tells DQ. “The reaction has been great so far.”

That the show – about a group of young boys exploring their identities without the leadership of male role models – has attracted such a cross-section of viewers has come as a surprise to the director, who says he was initially apprehensive about creating a crime series that features no police officers or traditional investigation procedure.

Instead, “it’s mostly set in an arena with young people and most of the time they’re drunk,” he says. “So it has been a challenge I’ve been afraid of because of the fact we have taken out most of the adults from the story and just focused on all the young people.”

Making his first series for a streaming platform, Risvig also had to contend with the expectations that come with a bigger budget and a potential audience of millions across Scandinavia and elsewhere in Europe.

“I really had to meet new standards for what a scene should look like and how we should develop the production,” he adds. “Now you have a lot of money to do stuff, but that doesn’t mean the story works all the time. It was a big challenge for me but we came a long way with it.”

Boys delves into the dark world of a boys’ choir in Silkeborg, Denmark. On the surface, the boys are characterised by the purity of their singing voices in church, but when the bell ringing stops, they explore forbidden urges within their unbreakable union based on alcohol, sex and borderline wildness. When one of the boys, Lasse, dies in a suspicious drowning incident and a new boy, Robin, enters the group, their loyalty and togetherness are put to the test.

Though his death is dismissed as an accident, Lasse’s girlfriend Leonora (Karoline Hamm) begins to suspect his friends are hiding the truth – especially the group’s leader, Nikolaj (Viktor Hjelmsø). Meanwhile, Robin (Sylvester Byder) has returned to his childhood home after the death of his abusive father and comforts old friend Karolina in her grief, while promising to find out what really happened.

Launching on Viaplay last month, Boys is loosely based on Risvig’s own upbringing in Silkeborg, where he also experienced the contrast of going out with his friends before joining them in the local church choir.

At the same time, Risvig dreamed of directing movies and series, inspired by filmmakers such as Steven Spielberg. And although he later decided a place at Denmark’s national film school wasn’t for him, he never gave up on his dream, with his girlfriend encouraging him to take a different path.

“I started Googling and I found out most of my favourite directors never went to school, so if they could do it, I could have a chance with hard work and passion too,” he says. “Then I changed my focus drastically. I kept doing music videos, skate videos and commercials until I suddenly had a crew I could call, and then we did some small series for YouTube. When the big platforms saw we had an engagement with an audience that they couldn’t get, we started developing projects.”

Produced by Reinvent Studios, Boys is not only Risvig’s biggest series to date, it’s also the one he’s been working on the longest. He first started writing it when he was 18, throwing out numerous drafts until he partnered with series writers Mikkel Sørensen and Lars Bang.

“We spent a lot of time just talking about what it’s like to be a boy and a man, to be a father,” Risvig says. “We narrowed it down to always focus on the group of boys and what they would be doing. Every time we didn’t know where to go, we would ask ourselves what we would do right now in the story.

“They wrote it all. I was a part of the room developing the ideas, but over the past few years developing the script, I have written the script several times by myself and thrown it away. They came into the project and we started again and then it all began to make sense.”

In a post #MeToo landscape, Risvig’s interest in creating the coming-of-age story stems from his observations of how boys have had to learn what their fathers’ generation have done wrong and are now afraid of repeating those mistakes.

“I wanted to do a series that focused on why it’s so difficult to grow from boy to man,” he says. “There are a lot of fights, a lot of emotional walls you have to go through – with your father, becoming who you are, finding love and discovering your sexuality. That was the primary focus.”

Most of the series is actually shot where Risvig grew up, in locations characterised by picturesque lakes and forests. “From time to time, someone would go missing in the lakes. I remember being young and everyone speaking about what happened,” he says. “We were surrounded by a lot of mysteries, so I had the idea to do a crime story based on an accident happening in my own home town, but I wanted to dramatise it and to make it more intense than my own upbringing.

“It’s all about secrets, the past and the future and how it affects a group of boys when life suddenly hits you in the head. They lose one of their best friends and no one really knows what happened, and the series focuses on what happens to the people who are left behind and how they walk together into the future, or if they split up.”

On set, Risvig gave his ensemble of actors freedom to improvise, sometimes rehearsing up to 10 times before committing a scene to film with a cast that also includes Julie Christiansen, Tarek Zayat, Oliver Michelsen, Elias Budde Christensen and Emil Baadsgaard.

“I played a lot, made a lot of mistakes and shot a lot of material we couldn’t use, but I had a lot of fun making it,” he says. “I loved not knowing where we were going all the time. It’s difficult for the production team because I’m never really capable of telling them what we’re doing next or where we’re going tomorrow. It takes a lot of effort from the team, but it was fun for me and the actors at least.”

Filming the show’s most raucous scenes – the boys releasing fire extinguishers in the street, partying and running wild in the forest – was especially “crazy.” Risvig wanted his young stars to create a natural bond and build a spirit of brotherhood, so booked them into a hotel together for a week before shooting began so they could get to know each other.

“Normally I would be very close with my actors, I would be talking to them all the time and we would be developing the story together. But with this group of boys, because I asked them to be a group and be themselves and create a wolf pack on set, I was actually very distanced from them,” he says. “When they did these crazy scenes, I never felt I could be a part of it. Normally I do. But it was a really fun way to work, to distance yourself from what you are trying to achieve. It made for some good tension that worked really well on screen.”

The trickiest part of making the series proved to be developing the character of Nikolaj’s father, played by Salim (Deliver Us, Warrior), “a guy you don’t want to be friends with.” Risvig found it difficult to find a line between psychopath and human being for the character, who represents toxic masculinity.

“Dar was so cool, he just went to set, removed all of his experience and ego and said, ‘Let’s do something crazy with this one.’ I just remember wanting to be a good director standing in front of him, but he was the most chilled guy. The boys were so afraid of him getting into the scene. Everyone was terrified of him, but as soon as we said ‘cut,’ he was the warmest person. It was great working with him.”

Risvig is now lining up his first feature film, which he says will bring characters from Boys and his other series into the same universe. “I want to let all the characters be a part of each other’s lives and make it a culmination of a few years of work,” he notes. “I want everything to collide, and then maybe burn it all down and start from scratch again.”

As for other aspiring filmmakers who want to make it on their own, he encourages them to follow their instincts, be curious and take the steps they need to achieve their dream.

“Instead of trying to be a director who pretends to be able to direct a Viaplay series and work with an actor like Dar Salim, just go with your instinct and be smart, be honest and tell people what you know and what you don’t know,” he says. “Then people will begin believing in you too.”