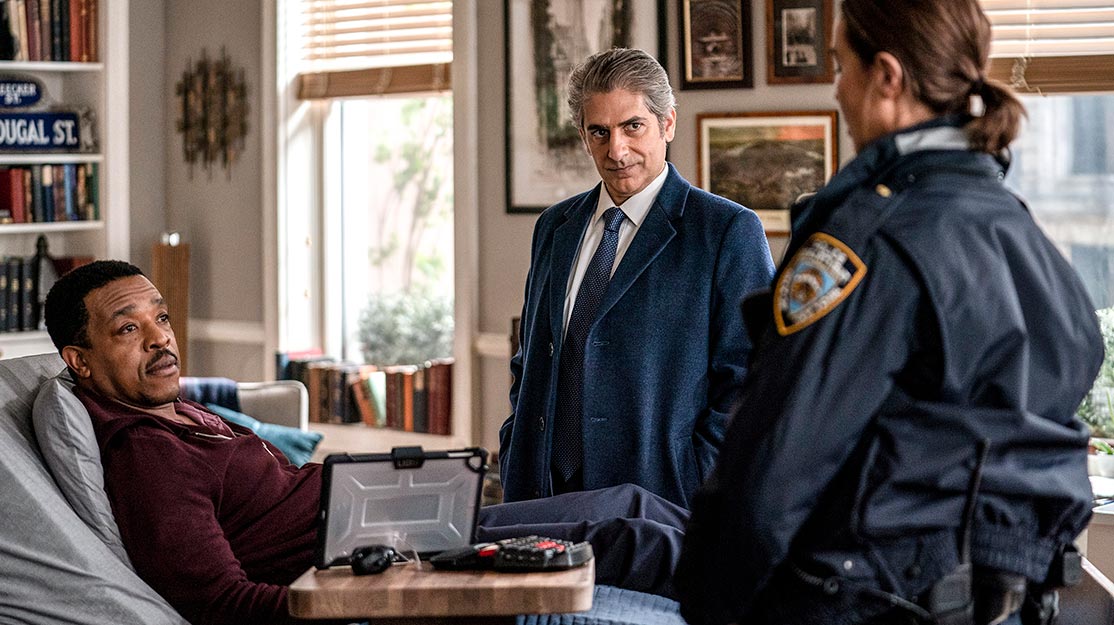 Showrunner Barry O’Brien outlines his approach to bringing an adaptation of Jeffery Deaver’s acclaimed novel The Bone Collector to NBC, two decades after Denzel Washington and Angelina Jolie starred in a big-screen version.

Over the past 20 years, television has undergone unprecedented change as the impact of high-end drama on cable channels and now streaming services has raised the bar for scripted series, both in terms of story and production quality.

Perhaps nowhere has the bar been raised more than in US network TV, still known for its focus on case-of-the-week procedurals in a world where audiences demand character-driven stories with serialised plots running across entire seasons.

The latest series now trying to find a balance between these two storytelling models is Lincoln Rhyme: Hunt for the Bone Collector, which debuts this Friday in the US on NBC. The 10-part crime series is inspired by Jeffery Deaver’s bestselling book The Bone Collector, first published in 1997 and adapted two years later as a movie starring Denzel Washington and Angelina Jolie.

The plot introduces the enigmatic and notorious serial killer known only as the Bone Collector (Brían F O’Byrne), who once terrified New York City until he seemingly disappeared. Three years later, when an elaborate murder points to his return, former NYPD detective and forensic genius Lincoln Rhyme (Russell Hornsby) is brought out of retirement and back into the fold.

For Lincoln, it’s a particularly personal case, having been paralysed by a trap set by the killer. To bring the Bone Collector to justice, he teams up with young profiler Amelia Sachs (Arielle Kebbel), and the duo play a deadly game of cat and mouse with the psychopath who brought them together.

Series showrunner Barry O’Brien worked for many years on CBS series CSI: Miami, the first spin-off from iconic police procedural CSI: Crime Scene Investigation, and says working on that series was like solving a crime puzzle. “It didn’t quite open up to the personal character narrative that audiences have embraced since that franchise was so popular,” he says.

“Now you have shows like The Night Of on HBO, which was just a brilliant story – so interior, so personal. The depth of character was really the engine of the show and, in that way, it was a living novel. That’s the kind of storytelling you see on cable and streaming and hasn’t been fully embraced by networks. So [on Lincoln Rhyme], we have to adhere to the requirements of our network, NBC. They want both, so it’s the challenge, the job and the opportunity to find that perfect alchemy of a procedural ‘A’ story and a character story as implied by our title – Lincoln Rhyme is hunting the Bone Collector.

“It’s an interesting time in network; they really do want both. They just don’t want a ‘case of the week.’ It’s far more complex than that, and that’s where this story will invite a lot of people to the show as we tell that story.”

Lincoln Rhyme: Hunt for the Bone Collector was first ordered as a pilot in January last year, written by VJ Boyd and Mark Bianculli, before NBC handed it a series order in May. O’Brien joined the project as showrunner while the pilot was being edited.

The first episode sets up the story of Lincoln’s return to policing, three years after injury left him disabled and bed-bound. With the Bone Collector seemingly returning to New York, Lincoln recruits Amelia to be his partner in the field, the profiler wearing a camera rig so that she can relay images from crime scenes to the high-tech workstation installed in his apartment.

“It was a ground-floor pilot that left the question, ‘What is the series? What is a satisfying way to continue this story?’” O’Brien says. “Network has its certain mandates and needs, and we came away with a hybrid of telling a procedural ‘A’ story every week – a murder and the challenge to solve that murder and bring justice to the family of the victim – along with telling the unfolding story of hunting for the Bone Collector.”

The series – from Universal Television and Sony Pictures Television in association with Keshet Studios – also tells a lot of personal stories concurrent to the weekly crime investigations, focusing on Lincoln coming to terms with his disability as well as Amelia’s introduction to the world of murder investigation.

“Trying to find a balance between the two has been the job and has been, at times, a little challenging,” O’Brien admits. “We quickly found a formula that works for everyone. Hopefully it will be satisfying to a wide audience – readers of Jeffery Deaver’s books to start with and then NBC’s audience that has certain expectations when they join a new procedural.”

From the beginning, however, O’Brien says the writers felt an “allegiance” not just to Deaver’s novels (the Lincoln Rhyme franchise comprises 15 titles), but also the movie, which paired Washington’s Lincoln with Jolie’s police officer Amelia Donaghy.

“We feel a responsibility to the audiences of both, but we also want to give [the series] a new voice and its own identity,” he explains. “We made some subtle changes but, hopefully, fans of both the books and the movie will see enough of the familiar franchise at work here to feel invited to join us for the ride.

“Where we depart is we have given some nuance and some character development to Amelia’s character, to Detective Michael Sellitto’s character [played by Michael Imperioli] and Lincoln’s relationship with his caregiver. In the book, it was a man named Tom. But in our world, it’s a woman named Claire, who is played really convincingly by Roslyn Ruff. We have evolved but not departed.”

At the centre of the story is Lincoln, a detective who is utterly dedicated to his job and who has a unique understanding of New York City, its history and its environs that makes him more than a match for the criminals he is hunting. His efforts are supported by forensic specialist Kate (Brooke Lyons) and tech guru Felix (Tate Ellington), creating a unique task force that gives Lincoln all the tools he needs.

The key addition to that team is Amelia, a young woman weighed down by the murder of her parents, which she witnessed as a 14-year-old, and her role as carer for her younger sister.

“She has quite a world to contend with,” O’Brien says. “One of her challenges is to raise herself to her multitude of responsibilities and find her way forward. That journey, played so well by Arielle Kebbel, will drive us through the first season and beyond. That’s where we find our voice.

“We are really telling a story of the team – Lincoln and Amelia – working together. They both bring a unique set of abilities to the table and they have to adjust as they work together. In the second episode, you see how Amelia pushes back somewhat. She’s more than just eyes and ears, she also has a brain and a point of view. So we tell the story of what Lincoln goes through to work with Amelia and to be adaptable himself.

“Then, conversely, Amelia has to learn to work with Lincoln. He can be irascible, he can be quite certain, he can be a little on a mission and she has to find space to insert her point of view and her opinions and theories.

“There’s a fundamental difference between the two you see in the pilot. Lincoln is about the evidence, whereas Amelia is a profiler. Lincoln doesn’t put a lot of credence into profiling; he’s about what the evidence is telling him. That’s his approach. Amelia slowly gets him to change his opinion and approach over time. This takes a season to create, and hopefully more than one season.”

As a writer and producer, O’Brien has enjoyed a career in film and television spanning almost 40 years. His first credits were on classic comedies Happy Days and Laverne & Shirley, while he has recently worked on network series The Following, Castle and Gone.

He says his showrunning style is collaborative, an open process that ensures everyone on the staff has a voice. “The writers room is a safe space for everyone to venture ideas – good, bad and different,” he says. “Sometimes bad ideas are the greatest gift to a writers room because they just spark something new. We got together in June and started breaking stories and started by asking what stories do we want to tell and where do we want to take these characters.

“We wrote a series bible that conveyed the arc of our season, outlining how the task force was going to coalesce around Lincoln and how these personal stories were going to find their own voice and narrative. We’re also telling the story of the Bone Collector, played so brilliantly by Brían F O’Byrne. He’s the shark out of the water, but we let the audience peek under the surface at him and his life throughout each episode as we advance that story, with the Bone Collector and Lincoln Rhyme on a collision course that we pay off at the end of the season.”

Inevitably, as creative decisions are made through the development of the series, the bible became less a roadmap than another form of source material, alongside the books and the movie, on which O’Brien and his staff could lean. He has also been inspired by other book-to-television dramas such as Justified, Sharp Objects and Mr Mercedes. “We found that, as we went forward each week, we evolved and we started telling our story our way, and I’m most excited about that,” he says.

Deaver, the showrunner adds, has been “incredibly supportive,” receiving constant updates about how the series is progressing and giving the creative direction of the show his seal of approval.

The wealth of material created by the author means there is plenty of scope for the show to continue across multiple seasons. “And he’s not through writing yet,” O’Brien says. “He is a huge cheerleader of the show and has given us access to his entire library. From a writing standpoint, it’s a huge gift. We have all this material to draw from and I do see a future where we continue to tell the Bone Collector story and bring other ‘big bads’ into the narrative, which might draw directly or be suggested by a Jeffery Deaver book.

“But we have presented a world to the network where this series definitely has a long-running future if we’re lucky enough to find our audience.”