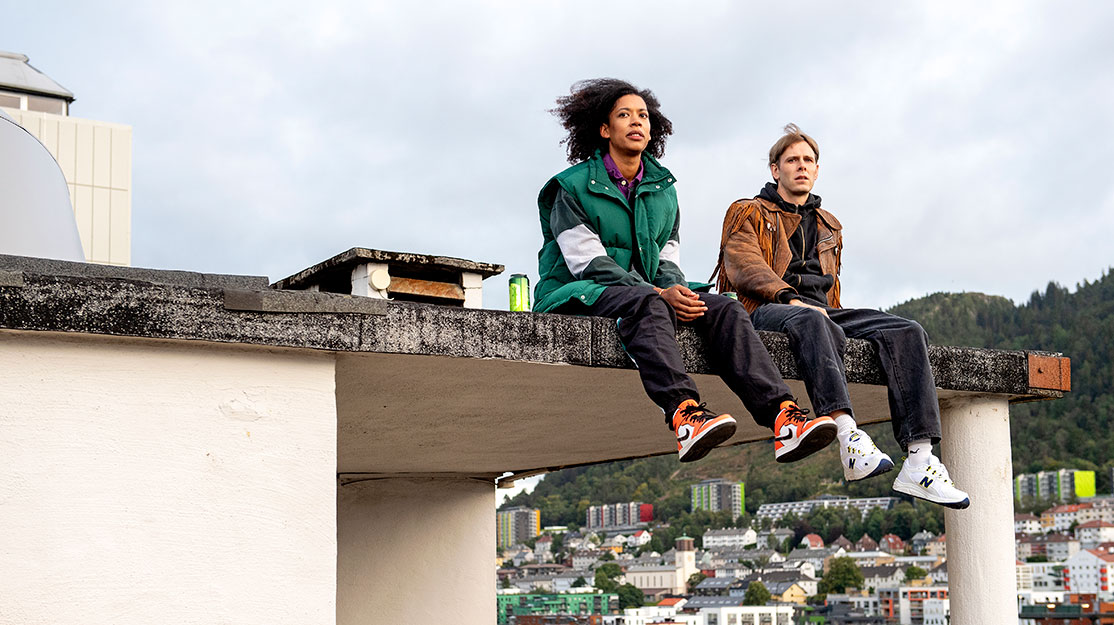 Verden er Min (I am Earth) creator and writer Amy Black Ndiaye tells DQ how she broke new ground with this Norwegian rap musical about a woman finding her way through life as she enters her 30s.

After starring in the first season of Norwegian crime drama Wisting in 2019, this summer Amy Black Ndiaye was part of the ensemble cast that featured in office-based comedy series Lunch, a TV2 show that brought to life the comic-strip characters created by Børge Lund.

But it is Verden er Min (I Am Earth), a project that aired earlier this year on public broadcaster NRK, that has been the focus of Ndiaye’s acting and writing ambitions for the past five years.

The series is set in the city of Bergen on Norway’s southwestern coast. Ndiaye plays protagonist Odile, who is entering a new phase in her life: her 30s. While her friends have proper jobs, relationships and kids on the way, Odile still hangs out with her best friend Stian (Lars Vaular) in his studio, making music she never releases. Meanwhile, her father Modou (Ndiaye’s real dad Joe Ndiaye) wants her to find a man, so it might be time she told him she is a lesbian.

Through all six episodes, rap songs are performed by Odile to accentuate emotions or themes related to the story, in a series that has been billed as Norway’s first ‘rapsical.’ Furthermore, Ndiaye’s father isn’t her only relative to appear in the show, with her mum, sister and niece also playing their fictional counterparts.

Speaking to DQ at French television festival Série Series, Ndiaye admits she’s trying to keep her feet on the ground after making her first original show. “I’m just going with the flow,” she says. “If I take a step back and try to look at it from an outside perspective, I’d think, ‘That’s pretty cool.’ It’s good for me to just let it be what it is and not think about it too much. I’m going to try to stay humble.”

Having worked in theatre in New York before returning to Norway to attend film school, Ndiaye reveals her start as an actor didn’t quite go to plan. “I wasn’t very good,” she says. “I was pretty awful.” But it was acting that paved the way for her interest in writing, “and once I was more confident and less insecure, then somehow I managed to become an actor as well.”

She particularly remembers the moment she pitched Verden er Min (which translates directly as The World is Mine) to NRK, where former executive producer and current drama head Marianne Furevold-Boland was in attendance.

“I was so nervous. But Marianne said it was amazing to see my growth because walking into a room filled with predominantly white people to talk about being different, feeling out of place and internalised racism and all these things is really scary,” Ndiaye says. “I just want everyone to feel safe to ask questions. It went really well because she’s so nice, understanding and open.”

As Ndiaye explained during her pitch, the show is a rapsical – rap musical – about a woman who labels herself as a half black, half white, Muslim lesbian rapper living in Bergen. “But really she’s just a human being,” she continues. “If you tell someone you’re going to do a story about those labels, people would be like, ‘Oh, that’s too much.’ But really it’s just a story about someone who’s trying to find her path to an authentic life, and that’s something everyone can relate to.”

At that point, Ndiaye had only created a band of characters. After the meeting, she fleshed out the character-driven story, which largely revolves around Odile’s relationship with her Muslim father. But as the series reveals, while Odile struggles to discuss her sexuality with him, it’s her own prejudices that create problems, rather than those of other people.

“I knew the most important relationship was with the dad,” she says. “It’s usually the assumptions you make that create the distance [between people], and if you don’t give people a chance to show that they’ll be there for you regardless, you’ll be the loser.”

Working on the story, Ndiaye tried to start a writers room but found that approach didn’t work for her. Instead, she spent time in the music studio with co-star and real-life rapper Vaular and series composer Frode Kving Flatland to write the show’s songs, before returning to the story once those tentpole moments were in place.

“Odile came first and then the music, then I went back to writing and then back to the music,” she says. “When we got the green light, I was like, ‘OK, now I just have to write it.’”

It wasn’t entirely smooth sailing from that point, however, as she describes a 2019 pilot she wrote as “awful, it was horrible, because I didn’t know exactly how I wanted the music to come across.” In the end, the music came from performances in the studio or at home – rather than characters breaking out into song wherever they are – where Odile’s words chime with a specific moment in the story.

“I remember thinking, ‘They’re never going to let me make this show because it’s really bad and no one’s going to want to work with me now. I’ve lost their trust.’ But they were all like, ‘We’ll do better next time.’ I was surprised they still wanted to work with me. It was like failing forward.”

Stepping in to play Odile after the originally cast actor left the project, Ndiaye had to learn to rap to play the part. Her first public performance came at the Berlin International Film Festival (Berlinale), where the show was introduced to potential backers and coproduction partners and the producers wanted her to perform on stage as part of the presentation.

“Listening to some of the stuff I did in the beginning is cringe-worthy. It’s really awful; I can’t believe some of the things I did,” she says. “Luckily I don’t think there was a single rapper in the audience that day.”

Vaular was also on hand to offer her some advice. “He told me to think of it like a basketball player, because you can’t just shoot the three, you have to learn how to hold the ball and then move further out,” she says. “I was also listening to where he breathes and the flow [of words], and trying to make it my own and put some meaning into it so it wasn’t just monotonous. It was fun, I love challenges, but I was so scared. And if I’m scared, I know I have to do it.”

As the creator, writer and star, Ndiaye was across the whole production from beginning to end. Working with director Øvind Holtmon (Oslo Zoo), she wanted the perspective of the series to always come from Odile, using wide shots and reducing the number of close-ups unless they are of things the character is looking at herself.

As a result of delays in the writing process, the final scripts were only handed in three days before shooting began. Then by day three on set, “I was exhausted,” Ndiaye recalls. “I was like, ‘I can’t do this. What have I done casting my entire family in this? This sucks and everyone’s going to hate me and I’m going to ruin my family.’”

But when she realised the entire cast and crew were there to support her, she managed to find another gear and returned to set the next day pumped up and ready to go.

“It helped having family and so many close friends around – I didn’t always have to fake it and I could be honest and say, ‘I’m really tired, I’ve got a headache.’ They could give me a moment, then we’d shoot. The director and I would go through the pages for the next day and, if I had to do a rewrite, I’d do it on the evening before. I’d also watch the dailies to see if the shots were right.”

Ndiaye leaned on her own experiences and relationships when creating the series, but she says Verden er Min is never autobiographical. “I can relate to Odile’s journey, assuming a lot of things about people, assuming they won’t accept me for me, and then isolating myself. But as soon as you start being honest and let people like you for who you are, confidence and self-assurance come,” she says. “That part I can relate to. And her fear of releasing music, I can relate to that in the sense it’s scary to write and be specific and not shy away and let decisions be made by other people. It took five years to find that courage, but I did it. I’ve taken some of my best and worst parts and blown them up with her.”

If writing your first series, acting in it and learning to rap weren’t enough, Ndiaye also points to a pair of key challenges she faced while making the show. The first was writing the character of Odile’s father, and how she put too much pressure on him to represent all Muslims. Instead, she just let him be a father.

Then when it came to the show’s sex scenes, she was writing them while thinking about having to perform them. “We did that scene on the second day, and for Tinashe Williamson, who plays Zoe, it was her first day shooting and it was the first scene she did. She was so fierce and went all in so it was easy for me, like doing another scene,” Ndiaye says.

“Because we’re friends, we just followed the scene exactly as it was written and that created a safe space. We developed her character together, and the relationship [between Zoe and Odile], so it went really well and it wasn’t scary or horrible. I’m really glad we did it in the beginning, otherwise I would have been nervous and anxious for weeks if we’d shot it at the end.”

The biggest lesson Ndiaye will now carry into future projects is to take more time during the writing process to listen to feedback – and to also question where it comes from. “Some people will give you feedback without knowing or understanding what you were trying to do. Then because they don’t understand it, they’ll assume it’s bad and come with a solution,” she says. “If I assume they know where I’m going and listen to that solution, I’ll write it, and then three weeks later I’ll realise they didn’t understand my intention and I’ll have to go back and fix it. I learned to always ask, ‘But why do you say that?’

“That’s why I need space in my writing process to do large detours. You have to be patient when you’re working with me.”