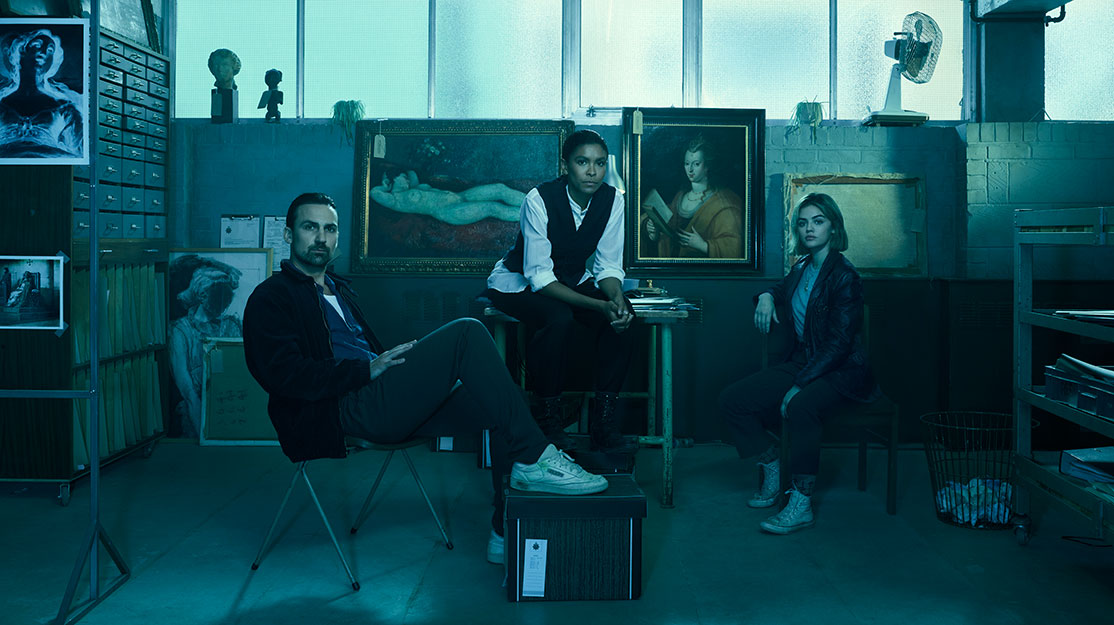 Head writer Freddy Syborn and executive producer Sally Woodward Gentle preview six-part thriller Ragdoll, in which a killer taunts the police officers hunting him by revealing the names of his next targets.

In a dark room, its windows covered to avoid daylight streaming in, a body hangs horizontally from the ceiling. Yet this isn’t just one victim of the so-called Ragdoll Killer but parts of six different people who have been murdered, dismembered and sewn back together to create one monstrous cadaver.

In six-part thriller Ragdoll, police officers DS Nathan Rose, his best friend and boss DI Emily Baxter and the unit’s new recruit DC Lake Edmunds are tasked with finding the killer, who taunts the police by sending them a list of his next victims – with Rose’s name among them.

As they attempt to protect potential victims, they soon come under intense public scrutiny in what is described as a gruesomely imaginative serial killer thriller that also tackles the fascinating but flawed friends’ struggle with the consequences of institutionalisation and trauma.

Coming later this year to UKTV’s Alibi and AMC in the US, the series is produced by Sid Gentle Films (Killing Eve), which had been looking to develop a new crime series when script executive Sam Symons picked up a copy of Daniel Cole’s novel Ragdoll, on which the show is based.

“Most of the books coming our way all have the same ending. It was all because they’d been abused or there had been something terribly gruesome in their childhood – nothing that felt massively entertaining,” executive producer Sally Woodward Gentle tells DQ. “Then this came along and it is bonkers, but it is really entertaining. Not only that, it had a wit to it and potential in the characters to delve deeper.”

Head writer Freddy Syborn (Ms Marvel, Bad Education) had worked with Sid Gentle when he penned an episode of Killing Eve, and was talking to the company about adapting a different crime novel when they asked him to consider Ragdoll.

“What we love about Freddy is the analytical way he tells stories,” Woodward Gentle continues. “We’ve told the story slightly differently in this [from the book] but, at the same time, it’s about grounding it in character. Character leads the whole thing. Freddy’s pitched it as Silence of the Lambs meets When Harry Met Sally. It’s essentially something where you care about the characters and the kills of the week are the cherry on top. But the guts of it are the characters. Freddy dived into the book and had some very clever thoughts.”

Syborn was immediately drawn to Cole’s inventive take on the crime genre and the book’s distinct sense of humour.

“But the challenge for me was in terms of the characters,” he says. “I like stories that are driven by the flaws and the wants and needs of our characters. What sometimes happens in this genre is the plot happens and our characters happen to be going along with things. I want the plot to emanate from the characters because then you can have an exciting story about feeling. You can ground almost anything as long as you believe the characters. And then if they’re going into crazy, gruesome, macabre situations, you are emotionally with them and that lets you have more fun.”

Syborn also pushed the secrets and lies between the characters further into the foreground so he could explore how the their guilt, trauma and shame impacts them and those around them. Those feelings are then paired with a style of humour inspired by Korean crime thriller film Memories of Murder, of which Syborn is a big fan.

“It’s a phenomenal film that approaches the procedural from a very different perspective than we’re used to seeing,” he says. “It also manages to encompass a range of tones and to be really melancholic but also funny and slapstick. Ragdoll is distinctive and its own thing, but watching that movie gave me the courage to try to do something slightly different.”

The writer describes Cole’s ‘Ragdoll’ creation as “disgusting” and “absurd,” and the way he might react to seeing something like it has informed the tone of the series.

“It would be utterly monstrous to see it and I suppose my point of view would be you’d either break down and cry or try to laugh about it. Humour is a coping mechanism for so many people doing these kinds of jobs,” he says, before stating categorically that Ragdoll is not a comedy drama.

“I don’t think we compromise the truth of the emotional stakes for the sake of a joke, but the characters use humour as a coping mechanism for this job and they also use humour as a tool, as a weapon, as a shield. These characters should make each other laugh as well as us. That hopefully makes us love them more, but it’s always underpinned by the psychological reality that people do try to laugh their way out of horrific jobs and horrific situations, and the sad truth is it’s probably not going to work.”

That licence to find humour in even the bleakest of moments informs not only the characters’ behaviour but their relationships with each other. This is most apparent between Rose (Henry Lloyd-Hughes, The Irregulars) and Baxter (Thalissa Teixeira, Trigonometry), who in one scene share a joke over photos of the Ragdoll body that leave Edmunds (Lucy Hale, Pretty Little Liars) decidedly unamused.

“That’s an interesting scene because Edmunds is an outsider in many ways,” Syborn says. “As a younger person, as an American, as someone who is hypothetically attuned to her feelings, she’s allowed to look at the way our cops use humour and say, ‘This is really unhealthy. This isn’t working.’ That was important because we’re so often in Edmunds’ point of view.

The show’s tense, edgy atmosphere is partly down to its lighting design, which balances a sterile, stark police station with dark rooms lit only by the beam of a single torch or colourful neon strips in a karaoke bar.

“Of course, low light works really well atmospherically, but at the same time you want to be able to have atmosphere and bright light too,” Woodward Gentle says. “We’re not a show that is just gloomy-doomy. A lot of the visual references were about having very specific moments of colour, and it wasn’t about giving the whole piece a wash of blue. We wanted to avoid any sense that this is a crime drama and, therefore, it’s blue or it’s green or orange. It’s a very colourful piece and visually I find it very appealing.”

Syborn describes Cole’s novel as a “very forgiving book” to adapt, owing to the way the show’s six episodes emerged very naturally from the novel’s structure. Hale’s character Edmunds is a new addition, while the writer says many of the ways in which the show diverts from the source material are simply a result of the things that have changed since the novel was published 2017.

Distributed internationally by BBC Studios, Ragdoll is filmed and set in London. It was developed and produced during the pandemic, meaning Syborn and Woodward Gentle’s first in-person meeting, after six months of planning, took place on the first day of shooting, which was largely carried out in a repurposed industrial unit that doubled as a unit base and a build space.

“Writing in 2020 and 2021 was weird. It’s just a horrible time to be alive, so some of those changes came from there and where we were at versus where Daniel Cole was when he wrote the book,” says Syborn, who heads a writing staff that includes Cara Smith, Emma Dennis-Edwards and Florence Keith-Roach.

“It felt like the world had changed a lot, so a lot of the changes reflect that. In the writers room, we did four weeks on Zoom, which never feels like enough but we got through it. You actually spend relatively little time writing and lots of time talking in an improvisatory space. You’re just picking up those cues and making people laugh and getting closer and bonding. That’s harder on Zoom, but I was lucky to be with three great writers and we got through.”

“It is knackering. It’s unforgiving,” Woodward Gentle observes of the online writing process. “Knotty things quite often don’t get sorted out in the room, they get sorted out while you make a cup of coffee. You haven’t got that when you’re in a Zoom room. It’s imperfect but you can do it – it’s just not very pleasurable.”

While Ragdoll promises to strike a markedly different tone from Sid Gentle’s award-winning spy drama Killing Eve, Woodward Gentle says that, behind the scenes, the company’s slate is led by “combining really creative people and seeing what they’ll come up with.” In the case of Ragdoll, that’s Syborn and lead director Toby MacDonald (Old Boys), with producer Lizzie Rusbridger (Save Me Too), graphic designer Matt Wylie (Killing Eve) and composer Moses Boyd, who brings a touch of jazz to the unfolding investigation.

“That’s the fun bit, thinking about who you want to play with and how will they all work together. That’s the bit I love,” the exec says.