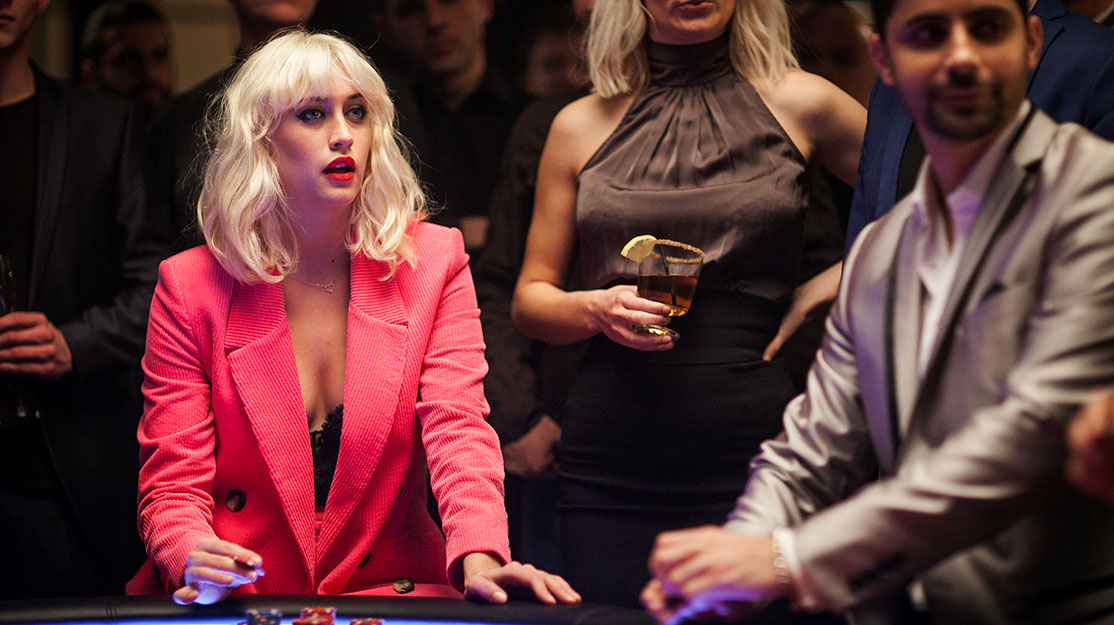 Swedish actor Julia Ragnarsson talks to DQ about financial thriller Fartblinda (Blinded), in which she plays a journalist tasked with investigating her married lover.

After appearing in one of the biggest films of the summer, Sweden-set horror Midsommar, Julia Ragnarsson is now leading the cast of eight-part drama Fartblinda. That the series is launching hot on the heels of director Ari Aster’s film reflects the way the two productions were filmed back-to-back, with Ragnarsson jumping from one to the other over an intense eight-month filming schedule.

In Fartblinda (known as Blinded internationally), she plays financial journalist Bea Farkas, who, in pursuit of her next scoop, detects irregularities in ST Bank’s trading department – a matter made more complicated by the fact she is having an affair with the bank’s CEO Peder Rooth (Matias Varela), a married man.

It’s in this ethical and moral malaise that much of the drama takes place, with Blinded placing financial thriller and relationship saga side by side. Ragnarsson’s Bea is a compelling character through which to follow the story, while her white blonde hair marks her out as an edgy, perhaps rebellious figure within the straight-laced newsroom.

The actor, best known for playing police trainee Olivia Rönning in Swedish drama Springfloden (Spring Tide), joined the Blinded cast just days before heading to Budapest, Hungary, to film Midsommar after she was invited to audition for the show. Filming for Blinded then began less than two weeks after Midsommar wrapped.

“It was strange. I just jumped on a train and went into the audition room but I did not know what this was and hadn’t read the script. I didn’t know anything!” Ragnarsson admits of the audition process. “Matias was already cast and then the day afterwards, they said I’d got the part. It was an extremely quick process. Everything happened so fast, so I was a little nervous when we started filming. I was like, ‘Am I prepared enough for this?’ I don’t really remember a lot about the first couple of weeks, it’s just like, ‘Which country am I in? What am I doing? Why’s my hair white?’ It was very quick but extremely fun.”

Bea’s hair makes her stand out immediately, marking a stark change from Ragnarsson’s usual brunette look. To ensure continuity, a hairdresser visited the set every three weeks to ensure the actor’s natural roots didn’t begin to show through.

“It’s rare you do a big change like that. I’ve always had pretty long hair that’s a natural brown colour,” Ragnarsson says. “This was an opportunity to make a big change, but at one point my hair started falling out – it just melted. So it was interesting! But it helps a lot for a character to make a drastic change.

“I feel like in Swedish cinema and TV, you have to look like a very common or average person. We don’t do anything to stick out. They want it to be very plain, normal, low key, like it could be anyone. But in this case, they wanted to go the opposite way, which was refreshing and fun. Also, with my clothes and styling, it could be something different. There are so many shows being made, you want it to feel a bit different.”

The series has been adapted from economics journalist Carolina Neurath’s book of the same name, which is based on real events. However, Ragnarsson says she didn’t read the book before shooting in order to avoid that story clashing with the plot of the show. Instead, she worked alongside directors Jens Jonsson and Johan Lundin to build Bea’s character based on the scripts by Jesper Harrie, Maria Karlsson and Jonas Bonnier.

“I had the opportunity to try different things on set and was very free to try something new,” she says. “They’re extremely generous when it comes to that sort of thing. That’s what’s fun about what I do; even though it’s hectic, you have some time to play, which I think is very important.”

Produced by FLX (Quicksand, Bonusfamiljen) for Nordic streamer C More and Sweden’s TV4, Blinded also represents the first major investment in the region’s drama by distributor All3Media International. Ragnarsson believes the show has a fresh style that will make it stand out.

“It’s not a cop show, which it tends to be if you look at [other Swedish series such as] The Bridge and Wallander,” she notes. “Not a lot of people really know what is going on in the financial world. It’s very closed and secretive, even for journalists. You have to start digging to find out what’s going on.

“This is about a private, niche bank but we’re starting to see now there’s a lot of weird shit going on with bigger banks, and I think the setting is interesting. It’s about tons of money, good-looking people, greed and how far [people will] go for the sake of money, or how far you go not to get caught. It’s just as intriguing and exciting as a cop show when there’s a serial killer on the loose, but we’ve seen that many times before.”

The most interesting aspect of the show is the internal conflict troubling Bea, who wants to do her job but is also in a relationship with the person she must investigate. Flashbacks reveal the origins of the relationship between Bea and Peder, showing that their affair is not simply a short-lived fling and that they have feelings for each other – to the detriment of Peder’s wife, Sophie (Julia Dufvenius).

“So do I fuck him over and potentially reveal a huge scandal that will take my career to a whole other level, or am I going to stick with this person, even though I don’t really know if he’s lying to me or not?” Ragnarsson says. “She decides to find out if he’s lying. It’s a very thankful thing for a character to have that conflict. It’s a suspense thriller but it’s also a love story and a relationship drama. It’s not just about the bank and the newspaper and the war between them; it’s also a war between these two people who are in love and might end up hating each other.”

Filming was split between Riga, the Latvian capital, and Stockholm. But despite the rapid production process, Ragnarsson says walking the right line through the Bea’s morale maze was the most challenging aspect of filming the series.

“I wanted the audience to understand how Bea makes this decision to start investigating and basically screw the person that she loves, and how her work and her profession are just as important as, or maybe more important than, this married man,” the actor adds. “So there are so many things that make it difficult. My challenge and my responsibility as an actor was to try to portray that.

“We’re going to see different sides to Peder, too, not just his flattery. It will be interesting to see what people think and if they’re rooting for us as a couple or they hate us both.”

Fartblinda launched with its first two episodes on C More earlier this month, before entering a weekly release schedule. TV4 will debut the drama on Monday.

“I hope this will be a nice mixture of a relationship drama together with this financial world, the investigation stuff and also the thriller elements,” Ragnarsson adds. “It gives the show some extra spice. It’s always fun to watch people in love.”