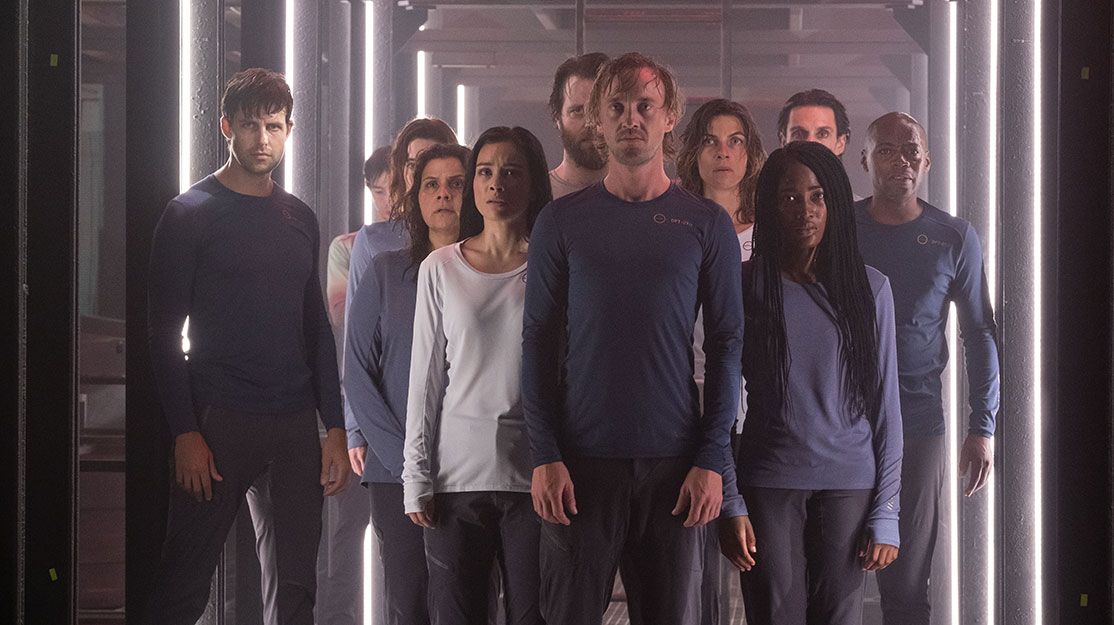 First-time showrunner Mika Watkins tells DQ about building Origin, a 10-part space thriller commissioned by YouTube Premium that mixes sci-fi and horror to tell the story of a group of people dreaming of redemption but left fighting for survival.

From script editor to showrunner in just two years, Mika Watkins’ ascent has been rapid.

In 2016, she was an aspiring screenwriter working for The Crown producer Left Bank Pictures when she was offered the chance to join the writing teams for BBC1/Netflix epic Troy: Fall of a City and Sky1 fantasy drama Stan Lee’s Lucky Man.

And now Watkins is the showrunner of Origin, a 10-part original series launching on November 14 on YouTube Premium, the web video giant’s subscription service. A sci-fi thriller tinged with horror, it opens as a group of strangers find themselves stranded on a spacecraft bound for a distant planet. The abandoned passengers must work together to survive, but quickly realise that one of them is far from who they claim to be.

“It’s quite a strange one because it’s the first script I ever got paid to write,” Watkins says of Origin. “I knew I wanted to write a show set on a spaceship but, rather than it being Star Wars or Star Trek, a space adventure, I wanted it to be about people who are the opposite of astronauts and scientists and are trapped in this dark place beyond our solar system, and how that would feel, and to pull all the horror elements out of that.”

The passengers on the ship are all looking forward to starting a new life, their previous indiscretions wiped away in return for their labour to help build mankind’s second home. Of course, their pasts will soon come back to haunt them. Each episode contains a serialised story following their journey through space, while also pausing to dip into the backstory of an individual character. That structure opens the doors to bring other settings into play, with storylines including a Mafia tale in Tokyo, a German spy noir and a VR love story.

“Early on, I knew I wanted it to be lots of different things. I wouldn’t write a show that’s just a spaceship horror for 10 hours. I think I’d find it a little restrictive as a writer, so I knew I wanted to find a way of breaking away from that,” Watkins says of her show, which also plays out in multiple languages, depending on the nationality of the character speaking.

The central theme at the heart of the series remains the question of whether a person can ever leave their past behind. “That’s the heart of the show and the heart of every episode,” Watkins says. All the other elements have been built on that, whether it’s the spaceship itself or the lives of the crew before they set off on the ill-fated voyage. “I knew I wanted to go to Japan – that was the anchor of my show because I’m half-Japanese. I really wanted to get into that world and I knew I wanted to do a bunch of different stories,” the writer continues. “When [lead director] Paul WS Anderson came on, he wanted to do one that was a bit more action- and military-based, so we did something like that with very cool fight sequences. The story just sort of developed and changed as we went.”

YouTube loved Watkins’ pitch – she laid out the first three seasons of the series – and greenlit the show a couple of months later. The video platform has been slow to enter the subscription space, with established SVoD players such as Netflix and Amazon well ahead following their voluminous assault on the television market. But Watkins says she was thrilled by the opportunity to create what will be one of the service’s defining series.

“I found that a really exciting proposition,” she says. “They threw so much money at the show, which, for a first time showrunner like me, is a really big deal. They just said run with it, but then they gave really good and detailed script notes, so they’ve been amazing to work with. They were committed from the beginning.”

Having just completed production on a 10-hour premium drama and now well advanced in post-production, Watkins seems entirely unfazed and incredibly upbeat about her role as showrunner – a position many claim is too much work for two people, never mind one individual on their first original series.

But Watkins says transitioning into the role – which is commonplace in the US industry but has yet to be so keenly adopted elsewhere – felt effortless. “I’ve had so many people around me, I’ve got such a good script team and amazing execs at Left Bank and, with YouTube’s support, it felt like I was really empowered to step into that role,” she explains. “I am probably a bit of a control freak, so being across everything, whether it’s casting, costume or music, that’s exactly what I want to do. I want to have a vision and to be able to shape it as completely as I can. It was definitely the best experience of my life and I feel really lucky to have been given that opportunity so early.”

Watkins is also an executive producer of Origin alongside Andy Harries, Suzanne Mackie and Rob Bullock from Left Bank Pictures; Josh Appelbaum, André Nemec, Jeff Pinkner and Scott Rosenberg from Midnight Radio; and director Anderson. The series is a Left Bank and CiTVC coproduction in association with Sony Pictures Television.

When Watkins says she was across everything, she means everything. A typical day would involve being on set with the director, leaving to write or polish a script, returning to meet with the costume team and then heading home to watch the latest edit. “It was 24 hours a day, but if it’s something you love, it doesn’t feel like work in the way anything else would,” she adds.

If there was any moment Watkins felt under pressure, it was arguably during casting when she sought the perfect actor to play Shun, the half-Japanese main character who speaks fluent Japanese and English. “I don’t even know how many auditions we saw but I wasn’t ever going to budge on who that character was,” she says. “That’s my anchor into the show, and in the end we managed to find someone incredible.”

That person was Australian newcomer Sen Mitsuji, whose agent sent an audition tape that led to an invite to LA to read with Anderson and then a chemistry read with co-star Natalia Tena (Game of Thrones, Harry Potter). “I had a very distinct idea of who I wanted and when I saw actors’ auditions or their reels; I knew if they were the one,” Watkins explains. “That wasn’t always the same as what YouTube imagined, but they were really supportive. If there’s one thing we really nailed, it’s the casting.”

During the writing process, Watkins led a writers room that comprised a script team and several additional writers. But the series is undoubtedly her own vision, owing to the fact she wrote six scripts herself and co-authored the other four. “Tonally, the show is quite distinct and it also rockets along,” she says. “It was probably quite difficult for other people to come in and capture that so quickly because our schedule was so demanding. So it was just good to have one voice across all 10.”

With the green light coming in July 2017, filming began in February and wrapped this July. Production took place in Cape Town, South Africa, where most of the sets were fully built and decorated, with Watkins noting there was very little use of green screen. Part of the scale of the build was down to Anderson, who the showrunner suggested for Origin after catching a late-night airing of his 2002 video game-based blockbuster Resident Evil. Anderson came on to helm the first two episodes, with four more directors also shooting two episodes each.

“The ship I’d envisaged at the beginning was much smaller and more underwhelming. He just made it really cool and brought loads of ideas. The ship doesn’t look like any other spaceship I’ve ever seen,” Watkins reveals. “He really liked the scripts, and we clicked instantly. I’ve never had such a good relationship with a director.”

Origin will go into orbit surrounded by a plethora of other space shows, including Star Trek: Discovery, The Orville, Lost in Space and The Expanse. Watkins believes the setting affords writers the chance to bring a disparate group of people together, but that’s just where Origin begins, with the show featuring horror, aliens and monsters and themes of mistrust and savagery reminiscent of Lord of the Flies.

“The series just gets better and better as it goes along,” the writer enthuses. “What’s exciting for me is the first three or four episodes are very genre-based, set in the present day, so it’s a lot about space and horror and monsters. Then from that point, there’s a shift and it becomes more about the fact these people are all together and they can’t trust each other, but they rely on each other to survive.”

The granddaughter of a poet, Watkins grew up with ambitions to become a writer, penning her own poetry and “terrible” teen novels. She wrote her first screenplay at university and later sold a comedy script to Objective Fiction (Fresh Meat, Peep Show). It was then while working for Left Bank as a script editor that the company got wind of Origin. She now has several series in development, including a female-led ninja series with Sister Pictures (The Split) and projects at US cablenet FX and UK pubcaster the BBC.

“As a young woman who didn’t have any contacts in the industry, it can be very difficult to get your stuff read. I think that’s something we need to improve and something I want to help do,” Watkins adds. “But things are improving. Five years ago, would I have got a 10-hour series commission? I don’t think so. I do think people are aware of it and they’re trying to change it. But there’s definitely a long road to go to support new writers.”