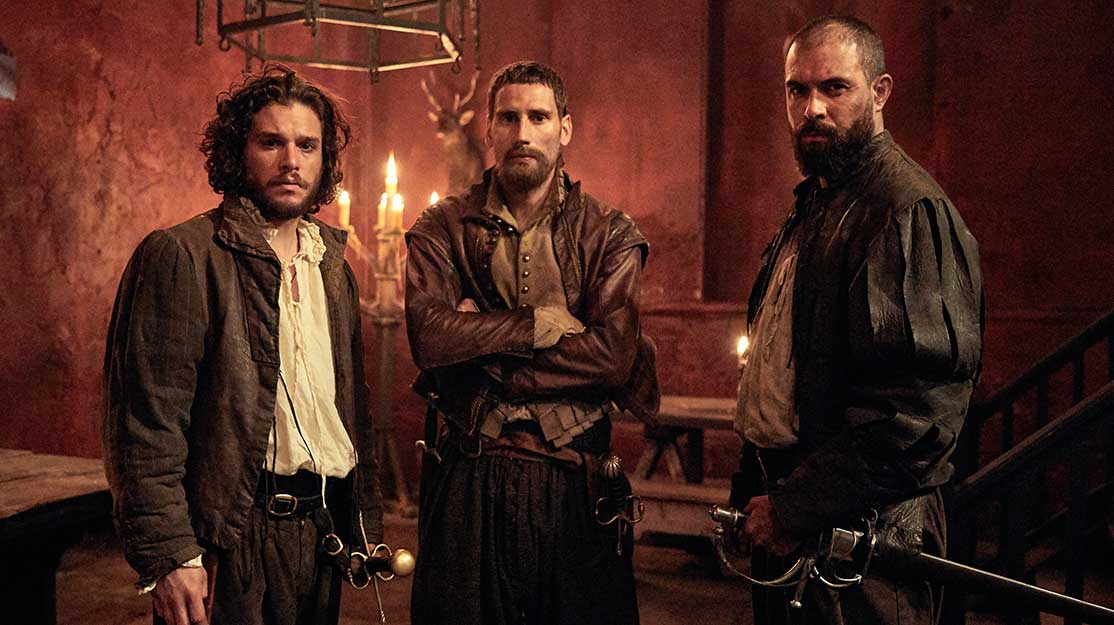 Kit Harington stars in and exec produces BBC1’s Gunpowder, which dramatises the plot to kill King James I. Alongside co-star Liv Tyler and the show’s writer and director, he reveals his very personal reason for getting involved.

Most people have at least one black sheep in their family tree, a relative who perhaps earned a less-than-honest living or brought dishonour to the family name with their actions or lifestyle.

However, very few of us can claim to be related to someone who tried to kill the king of England. Step forward Game of Thrones star Kit Harington – a direct descendant of the chief conspirator in the 1605 Gunpowder Plot to assassinate King James I.

For anyone thinking that means Jon Snow himself is related to Guy Fawkes, think again, as while Fawkes was the man caught red-handed guarding the gunpowder under the House of Lords, it was Harington’s “great, great, great, great, great something-or-other” Robert Catesby who actually spearheaded the plot.

As such, it’s Catesby, played by Harington, who is at the forefront of BBC1’s three-part miniseries Gunpowder, which aims to be a faithful dramatisation of the events now marked across the UK every November 5 with fireworks and bonfires.

The Game of Thrones star also executive produced the show, which launches this Saturday at 21.00 – “the Taboo slot” – and was produced by Kudos. Endemol Shine International is the distributor.

Discussing the appeal of the programme, Harington says he “prefers to avoid the term ‘passion project,’” but admits: “Really the idea spawned from a piece of family curiosity, which is that my mother’s maiden name is Catesby, my middle name is Catesby… I was always told, ‘Did you know you were related to the leader of the Gunpowder Plot?’

“More than that, me and Dan [fellow exec producer Dan West] couldn’t really work out why it hadn’t been dramatised. It’s such a significant piece of typically English folklore and we mark it every year, so it seemed odd.”

Indeed, while the gist of the Gunpowder Plot is one of the best-known slices of history in the UK, the facts and detail behind the story are much less widely understood.

With a PhD in history, writer Ronan Bennett is surely better equipped than most TV scribes to bring a truthful account of the events to the small screen. Yet even he admits that, upon being approached to pen the series, “I had forgotten if I ever knew about Catesby; that Catesby was actually the real mastermind of it.”

Bennett adds: “If you ask most people what they know about the Gunpowder Plot, they’ll go, ‘Guy Fawkes tried to blow up parliament’ – something like that – and everything else is empty. People don’t really know anything about it.”

Making the show, therefore, became something of a history lesson for all involved, including the impressive cast, which also boasts Hollywood star Liv Tyler, Sherlock’s Mark Gatiss and Downton Abbey’s Tom Cullen, who plays Fawkes.

“I think I knew more than some people about the Gunpowder Plot, but not a lot,” says Harington. “It was only by doing some research into it that I started to understand who [the conspirators] were.

“[Catesby] is a widower, he doesn’t connect with his son, he’s experiencing huge persecution and he’s a very proud man,” he says of his ancestor who, along with his accomplices, attempted to take drastic action against the king’s discrimination against Catholics. “In some ways, he’s on some kind of a death wish and he pulls a lot of people – some innocent people – with him into this plot.

“It was just fascinating learning about this piece of history.”

Harington also reveals that, as the production went on, his feelings towards the plotter changed significantly, adding that what was once almost a sense of pride over Catesby shifted to feeling “desperately sorry for him.”

“As you will see, he was a deeply sad man who botched the one thing he wanted to do. He fucked it up. Deep down, he was tortured.”

Securing Tyler’s services marked something of a coup for the production, with the high-profile actor only having one other TV series to her name, HBO’s magnificent Damon Lindelof drama The Leftovers.

“I don’t think these guys would have been thinking of me at all for this part, but I read it and I loved it,” she says. “I was really drawn to it. As an American, I know a little about the story but I don’t know everything, and it’s always nice to be learning something.”

As for her convincing English accent, Tyler, who previously had to lose the American twang to play Arwen in the Lord of the Rings trilogy, says it “kind of just came back – it’s like skiing.”

Gunpowder also marked a first for J Blakeson, who became the latest in the ever-growing line of film directors to try their hand at TV when he signed up for the show.

Having helmed features such as The Disappearance of Alice Creed and The 5th Wave, Blakeson says the involvement of big names like Harington, combined with the subject matter, meant it was an “easy decision” to board the project.

“You get a lot of scripts and read them, but very rarely are they ones you want to do. But this one… to read a script where you’re 25 pages in and you’re still in the first scene, it’s a rare thing.

“It was incredibly well written and it had that dream thing for a project, which is that people think they know [the story] and there’s recognition of it, so people are interested in it, but actually you have a story to tell that’s interesting and enlightening and people don’t know it. So there’s a real opportunity there.

“But primarily it was just a really good script and I really liked it.”

A strong sense of authenticity runs through the production, not least in the language, with Bennett explaining that many lines in the script were lifted directly from historical accounts.

That realism also extends to the depiction of the harsh era in which the story unfolds. One scene begins with King James defecating into a bucket just inches from his bed, with the royal stool then being carried away by an unfortunate servant.

But what really stands out in the first episode is the explicit portrayal of capital punishment. Indeed, a grisly and prolonged execution scene is as graphic as anything you’re ever likely to see on the Beeb.

Warts-and-all representation of the era was key to Blakeson, who says: “We have this very nostalgic view of the past, of it being this lovely place, but one of the great things about Ronan’s script is it’s not described as that at all. There’s no indoor plumbing, there’s no sewer system. People would die in the street – death was everywhere. It’s a horrible place.

“So showing the history as being like that – being textured, being lived-in – was quite important. It was like a living, breathing version of history.”

Gunpowder’s story is obviously not one that lends itself to a sequel, but having clearly enjoyed his first taste of exec producing, could more work behind the camera follow for Harington after Game of Thrones concludes?

“Yes,” is the resounding answer from the actor, who has launched prodco Thriker Films along with West and describes Gunpowder as being “like a tester” for projects to come.

“We very much want to continue looking for things, sourcing things, producing things. We’re looking for that next thing now,” he explains. “This was a test to see if, on a personal level, this was something I enjoyed doing, and I did enjoy it very much. I felt so proud of it all the way along, in a way that I find much harder to do as just an actor.”

Still, with Harington’s Catesby bearing Jon Snow’s trademark curly locks and beard, no one could blame the actor for seeking something totally different next time out. “Why I keep desiring to film in cold, muddy places on horses, I have no idea,” he jokes. “It must be something built into me from a past life.”