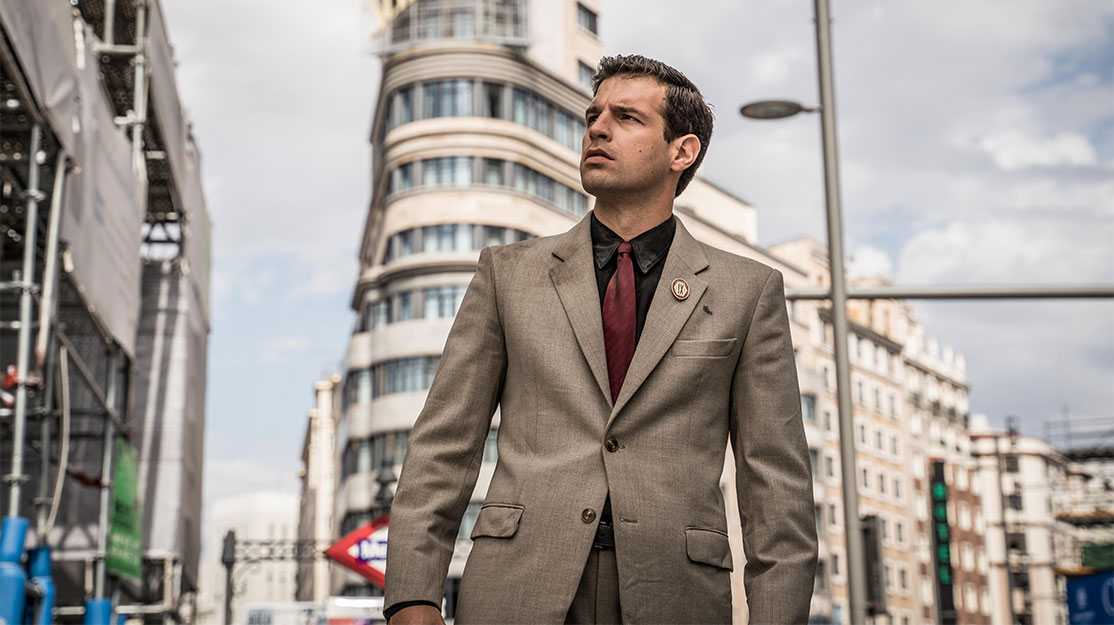 Spain finds a new superhero in the form of HBO Max’s García!. Writers Sara Antuña and Carlos de Pando reveal how they lifted the character from the pages of a graphic novel to create an action-adventure drama with plenty of heart.

Sherlock Holmes and Watson. Batman and Robin. García and Antonia? With the launch of Spanish action-adventure spy series García!, there’s a new double act in town.

Based on the graphic novel of the same name by Santiago García and Luis Bustos, the six-part HBO Max series introduces Antonia (Veki Velilla), a young reporter who becomes embroiled in an elaborate political conspiracy after accidentally defrosting our hero, a secret agent who had been cryogenically frozen in the 1960s. Think James Bond meets Captain America.

García (Francisco Ortiz) is a suave, besuited spy who is introduced during a daring raid on a steam train as it winds through a snowy landscape during a beautifully realised black-and-white prologue.

But this pawn in fascist dictator Francisco Franco’s regime must suddenly rely on Antonia’s help when he inexplicably finds himself in modern-day Madrid – and must decide where his loyalties lie amid a conspiracy to up-end the Spanish government.

Created and co-written by Sara Antuña and Carlos de Pando, an adaptation of the García! graphic novels couldn’t have been entrusted to better hands. Both comic book fans from an early age, they were introduced to the source material after reading a review that described it as “the best Captain America comic book I’ve ever read,” drawing links between Marvel’s iconic – and similarly cryogenically frozen – super-soldier.

“So I read the review and thought I would take a look,” de Pando tells DQ. “Only two volumes were published then and I read it in one night. I said to Sara, ‘Here’s something. I don’t know what it is but I feel like we need to do something with it because it’s amazing material.’ It had a lot of things we love – action, satire, really good characters and a portrait of nowadays Spain that was really amazing. It had all the ingredients for a great story.”

The writers first met working on Spanish comedy series Aída and then became regular partners 10 years ago, with work starting in earnest on García! – which has a “perfect” blend of comic book traditions rooted in a Spanish story – in 2015.

“We used to read a lot of American and European comics, but for us, it’s impossible to buy the rights to the comics we love,” Antuña admits. “We used to read a lot and fantasise about adapting comic books, but with this one, García! was very Spanish, which meant we felt more connected to it. It was more possible for us to try to do it.”

In particular, “the characters were really Spanish,” de Pando says, noting the graphic novel’s sense of humour and the way it discusses Spanish history with irony and a touch of guilt. “It talks about how we changed from the 1960s to now and how we didn’t in some ways. But the style of the characters was the biggest thing.”

Antuña was also intrigued by García!’s ‘superhero and sidekick’ dynamic, which shifts from García and Ortiz in 1961 to García and Antonia in the present day. “Like Sherlock and Watson, we wanted this kind of hero in Spain who goes on exotic adventures. We haven’t had it in TV before,” she says.

The tone of the show, which is directed by Eugenio Mira, is established from the outset with an explosive opening title sequence that blends live-action and animation. But beyond the secret agent story, García! is a very human tale of a man out of time and struggling to adapt to his place in the world. Like the comic books, the series also finds different visual styles to distinguish between the 1960s – filmed in black and white with a classical 4:3 aspect ration – and the present day.

“We embraced that – we made the 60s more naïve and more pulpy,” Carlos says. “In the old world, everything is black and white but now, you don’t know who the enemy is any more, and García is entering a much more complicated world than the one he knew.

“We also set that tone and the difference between the two worlds when we were writing the scenes – there is more ‘comic book’ dialogue in a way and we wanted to embrace reality when we arrived in the present day and wrote differently for both eras. When Eugenio arrived, he gave the series an adventurous and generous mood. When you see the series, there is different writing and a little different tone between the black-and-white and colour scenes.”

Across the series, García slowly evolves into a modern man, from the way he talks and walks to his manners, and even his fighting style. “Slowly he becomes a member of the modern world, so by the end of the series, he will be very used to modern life and things like cellphones,” Antuña notes.

That emphasis on character, particularly with García and “stubborn, good girl” Antonia, was always the main focus for the writers, who believe that if you have strong, emotional characters, the adventures will follow – just like in Doctor Who, which was another source of inspiration for the pair, who love that show’s sense of adventure, humour and sometimes heartbreak.

“We work harder on the emotional parts than the action parts,” de Pando says. “We love writing action scenes; it’s exhausting in a way but it’s enjoyable too. But what we always say is it doesn’t matter where or how the bomb explodes – it’s a matter of who is pressing the detonator and why. That’s it for us, so we put more weight and love into the characters.”

“We were always trying to get the action and adventure in order but never forget there are people involved too,” Antuña continues. “The most important thing for Antonia is, ‘What’s happening with my father and what’s happened with my boyfriend, who thinks I’m crazy?’ For García, it’s, ‘OK, I was frozen for 60 years and now where is my girlfriend? Is she alive?’ It’s a shock to be a time traveller, not for the shock in Madrid of seeing gay couples kissing or people with tattoos but, because the people you knew and love are dead or have forgotten you. We really feel a lot of compassion for García, even though we’re having fun with him in an action-adventure. Some things we wrote for him broke my heart.”

While the series is based on the first two volumes of the graphic novel, the writers didn’t want to slavishly adapt the source material for television. Instead, they spoke to original creators García and Bustos about the world of the story and then picked out some essential reference points that would form the basis of the series and that they would continue to return to during their writing process.

“We changed some characters, part of the history and parts of the scenes and so on, but those five things we loved most from the comic books were always a reference to go back to again and again to not lose the point of the adaptation,” de Pando says.

Of course, those reference points included the main characters, who the duo say have become more complex in the series, and how they felt about them when they read them on the page. They also wanted to include scenes from the comics they thought were “amazing,” such as one moment in episode two where García confronts two yobs on an underground train. They refuse to offer their seat to an elderly woman and are also playing loud music on their mobile phone, but García’s interjection leads to cheers from other passengers.

Antuña and de Pando also wanted to focus on the theme of found family, and how García, Antonia and her father, Jaime, become a close unit over the course of the series.

“I love talking about family – family at work, family with friends, your real family,” says de Pando. “The comic book had that feeling all the time, that this was a family evolving from the 60s to the modern day, so we see how García and Jaime [Emilio Gutiérrez Caba] were friends 60 years ago and how they now have a father-and-son relationship, and how García is a father figure to Antonia in some ways. There is a family revolution in the background a lot.”

The writers also wanted the show’s action scenes to have the same sense of wonder as the comics, without leaning too much into satire. “We are not saying sorry for making an action movie or series in Spain because we always use comedy to make it feel easier for the audience,” de Pardo says. “But we didn’t want it to be a parody. We wanted to take it seriously and say, ‘OK, this is an adventure, this is dangerous and real action.’ We knew we needed to capture this spirit in the series and make it amazing. That’s one of the reasons we talked with Eugenio, because he has that sense of wonder. When he talks, he doesn’t talk in words, he talks in scenes and movies. It’s a different language he uses and we were like, ‘This is the guy who’s going to make it huge.’”

Writing the series, Antuña and de Pando would plot the entire story and individual episodes together, only splitting up when it comes to writing the dialogue. But even then they would split an episode in half, write a section each and edit each other’s work to create one voice across all six episodes.

“In advance of writing anything, we talk a lot, all the time, and send WhatsApp messages – ‘read that book, watch that film, look at this.’ We find we are in the same spot of writing and then we try to discover what the episodes will talk about,” de Pando says. “When we plot the episodes scene by scene, we do it together too, and when we’re writing alone at home, we text a lot. Because it’s the first season, we were trying to find the tone all the way through to episode six. Then we rewrite and work again on some parts we need to adapt for Eugenio to direct. The only time we split is when we write the dialogue.”

But writing García! never felt much like work. “It was like playing all the time,” jokes Antuña. There were challenges, but with each episode posing a new adventure for García and Antonia, there were always new places to take the characters, while the flashbacks to the 1960s offered another creative opportunity to run two stories side by side.

“I would wait for him to write his part and send it to me, so I could read it. It was like reading the comic book again or being 10 years old watching some old series about The Lone Ranger and Tonto,” Antuña says.

While they are already thinking up new adventures for García should the series return for a second season, de Pando says it was “a dream” to be able to write a show that tapped into so many of the themes they have enjoyed since they were children, while creating something that also spoke to Spanish history and the country’s present-day culture.

As for Twitter rogues claiming García is a Captain America copycat: “Of course there is an appetite for superheroes and it has influenced us in our way of writing, but this is a perfect excuse for paying tribute to Captain America,” Antuña says. “They remade Zorro in America, so let’s play with other countries’ stories. Let’s have fun.”