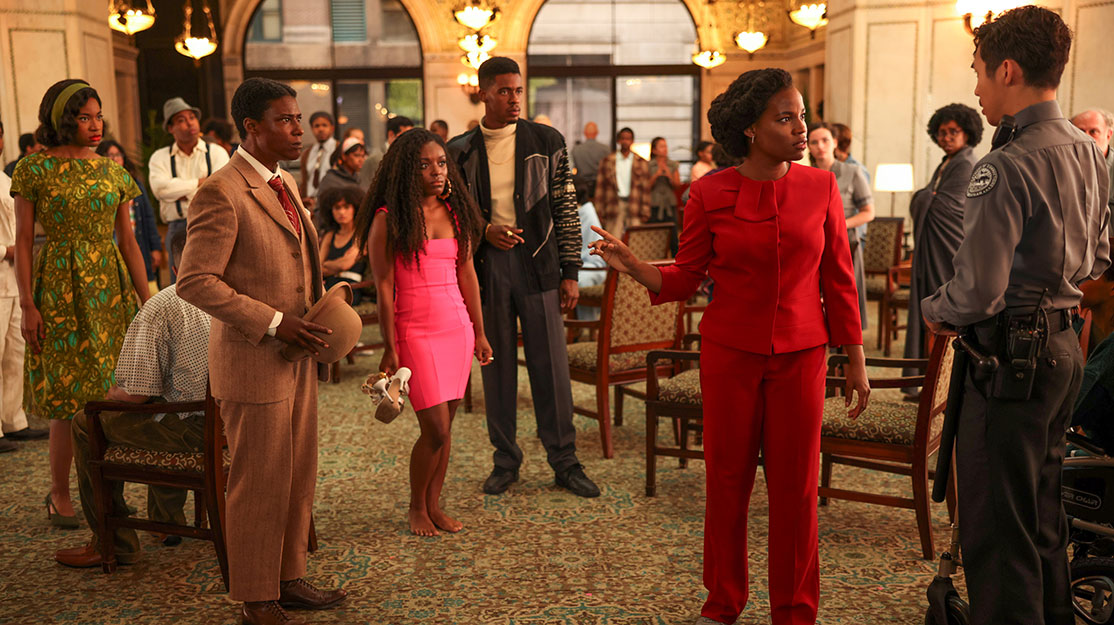 4400 executive producers Ariana Jackson and Sunil Nayar reveal how they reimagined the science-fiction premise behind a noughties drama that imagines what would happen if thousands of missing people suddenly reappeared.

In 2004, a series called The 4400 imagined a world where 4,400 people who had vanished between 1946 and the present day suddenly reappeared, untouched by time. The series ran for four seasons before it came to an end.

Now, a new version of the series, titled 4400, that offers a fresh, contemporary and topical take on the same premise has launched on US network The CW.

This time, 4,400 overlooked, undervalued and marginalised people who disappeared over the past 100 years are all returned in an instant to a Detroit park, having not aged a day and with no idea of what happened to them. As the government races to contain the story and analyse the threat, these individuals come to terms with their common plight and discover they have returned with a few upgrades, leading them to suspect they were all brought back for a reason.

When DQ speaks to executive producers Ariana Jackson, who wrote the series pilot, and Sunil Nayar, filming is taking place on episode eight while the writing team is breaking down the story for the final parts of the show’s initial 13-episode order. Episode six is in post-production.

“We like to joke that we have 4,400 episodes,” Jackson says. “We definitely feel like we have tons of story to tell. It’s a really character-driven show and we have so many great characters that we feel as long as they want to keep us on the air, we’ll do it.”

“The premise is brilliant,” Nayar says. “I remember watching the original and just thinking, ‘This is the most brilliant story premise I think I’ve ever seen,’ because it is limitlessly exciting and engaging. Ariana’s approach to it was to ask, ‘What if these were disenfranchised people from the different times from which they came?’ We have it grounded in these kinds of stories that we were interested in telling through a premise that really sets us up to tell them.”

Among the 4400 is a 1950s preacher’s wife who was active in the early civil rights movement, a 1990s church reverend and a doctor from 1920s Harlem, who each become the focus of an episode as the series moves forward.

“What we’re really interested in are the human stories and who these people are,” says Jackson, who was also a fan of the original series. “We’re taking the premise and using that to explore how these people’s past informs who they are now and, in a more general sense, how history informs where we are now. How do all of these different time periods and all these things that have happened before inform where we are today? How does that inform how we move to the future? We’re focusing on that through these individual character stories because that’s a journey everybody goes on.”

Nayar adds: “These people find themselves in a moment they didn’t expect, and so they think, ‘Well, what does this moment mean to us? And then how can we find hope out of it that maybe the people in this moment aren’t finding yet?’ That’s one of the things I think is really beautiful about the characters in this show.”

The journey to reimagining The 4400, which was created by Scott Peters and Renee Echevarria, started when producer CBS Studios approached Jackson through fellow executive producer Laura Terry with the idea to reboot the series from a black perspective.

“This was in 2020, mid-pandemic,” Jackson recalls. “I had a job. I had two small children. I was really not looking to take on anything else – and anything else that would have come my way, I would have said no to because I didn’t have it in me, to be honest. But I loved the 4400 when it was on; it made a huge impression on me. And because it is such a rich well for storytelling – it’s just an amazing premise – and given the times we are in now, given where we are in history now, the idea that we have all of these people coming to this point in time, it felt so exciting.

“It felt like a story that really had to be told, especially wanting to tell it through the black experience. In its first season, the show really focuses on the black American experience, looking at the history of black people in America, looking at how our country just refuses to reckon with its past and its founding in white supremacy and how that echoes throughout all of these incidents in the past and echoes to where we are today.”

Jackson, whose credits include Riverdale, Lethal Weapon and Unreal, began to think about what different time periods ‘the returned’ might arrive from. The first episode centres on Shanice, a lawyer, wife and new mother from 2005 who discovers her husband – whom she met at an Iraq war protest – now has a new partner and her daughter has grown into a teenager.

“We talk a lot in the writers room about how some of our ‘2021 people’ as we call them – and we are also 2021 people – are frogs boiling in a pot of water. We didn’t necessarily notice we were being boiled, but somebody who didn’t get boiled might come into this water and be like, ‘Holy shit, this is hot. What are we doing?’ There’s something about how jarring it is that these changes have happened. We’ve lived through them, so we don’t see how jarring they are or, again, how much has changed, but how much is still the same.”

That much is commented on by some of the black characters who have come from periods of time before the civil rights movement that mainly emerged during the 1950s and 60s, who find that nothing has changed when the 4400 are held under armed guard at the hotel where they are being kept while the government figures out what to do with them.

“Andre, who is from 1920s Harlem, notices along with Claudette, who’s from the 1950s, that you would have hoped that in 50 or 60 years, it wouldn’t feel like all these black and brown people are being policed and watched over in the same way,” Jackson continues. “It’s kind of very similar, right? It looks a little different, they’ve got different weapons now, but it feels the same. In some ways, we’re just still stuck in the exact same mindsets, and having people who didn’t experience all the changes, they weren’t there to be like, ‘Well, but we have iPhones now,’ and ‘Obama was elected. So racism is over.’ They see very clearly that things haven’t changed the way you think they’ve changed.”

Meanwhile, the show’s main 2021 characters include parole officer Keisha (Ireon Roach) and social worker Jharrel (Joseph David-Jones), who are among the civil servants called upon to deal with the mysterious arrivals and find they clash over their individual methods.

“Jharrel comes at it from, ‘How can I help people? What can I do to make people’s lives better?’ And Keisha, who comes at it from a law enforcement perspective, also believes she’s helping keep people safe, but it’s from a very different frame of reference,” Jackson says. “It’s from a reference of punishment and suspicion and constant policing. We’re really interested in how those two world views clash. It’s not black and white. Neither of them is the good guy or the bad guy, but they have really different ways of how they go about managing people or dealing with people.”

A supernatural element is thrown into the mix when members of the 4400 begin to observe particular new powers, such as the ability to regenerate. But the producers are keen to stress this isn’t a show about superpowers.

“They’re not turning into superheroes, they’re becoming people who have this extra thing – and that has consequences,” Nayar says. “Just because you have a power doesn’t make it good. That’s what our characters wrestle with, both within themselves and within the world they’re thrust into. But it’s also so exciting because it gives us a chance to let our imagination play within the realm of how we might approach these problems – and it’s fun. We let these powers grow out of who the characters are, and it informs them, which plays into the larger story too.”

With the writers room taking place online, Nayar (Revenge, CSI: Miami) compares the show’s staff to the 4400 in terms of the range of diverse voices, gathered from all corners of the US, that have been involved in shaping the characters and the story.

“Our writers room assistant is in Ohio, one of our producers just went to New York. The beauty of what the Zoom room allows us to do is you can be where you need to be,” he says. “One of our writers was like, ‘I want to go write at my mother’s place in San Francisco,’ and so they went and it was fine. Not being in LA isn’t a barrier to entry anymore. We have a roomful of remarkable writers that, in a non-Zoom world, we couldn’t have. I will say I feel blessed that Zoom happened because otherwise we wouldn’t have had this experience.”

4400 is filmed in Chicago, where rules and protocols have been put in place to protect cast and crew from Covid-19. However, the biggest challenge in making the show, which is distributed by ViacomCBS Global Distribution Group, has been finding room for all 10 series regulars in each episode’s 41-minute running time.

“Honestly, that has been the hardest thing for us to understand,” Nayar says. “You want to write for all of them, but then you have 10 juicy stories an episode and you think, ‘Well, that can’t be the case.’ At least for me, it’s been about learning how to balance that with the serialised storytelling we’re doing.”

As streaming platforms and cable networks continue to erode the power of the once-dominant broadcast networks in the US, both execs agree that the medium still has the power to reach viewers across the country, while the relentless production cycle also means stories are never in danger of stagnating.

Jackson now hopes viewers will fall in love with 4400 and its characters in the same way she has through the show’s development.

“These actors are amazing, and every crew member has just brought their best,” she says. “Everybody has worked together to create this really magical show – and it has everything. It’s got romance, it’s got adventure, it’s got sci-fi, it’s got drama. What do you like? You’ll find it in this show.”