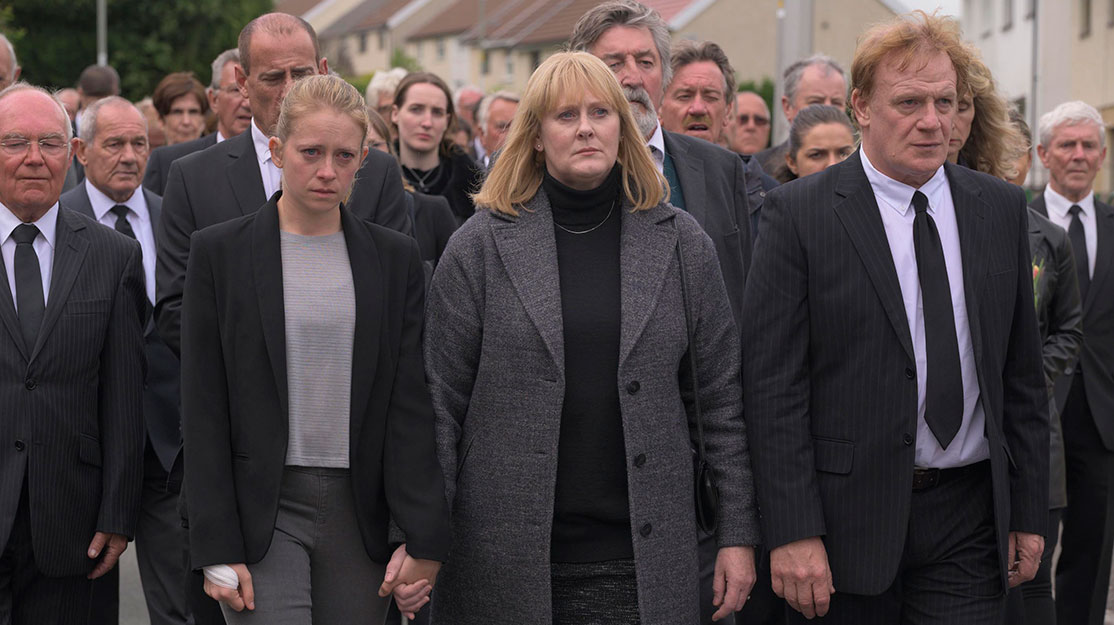 As Jack Thorne’s The Accident hits screens, DQ speaks to stars Adrian Scarborough, Genevieve Barr and Mark Lewis Jones to discuss the themes behind the Channel 4 miniseries and find out how it balances grief and humour.

In 2016, UK broadcaster Channel 4 and screenwriter Jack Thorne partnered on National Treasure, a miniseries that followed an ageing comedian accused of a historical sex crime. Then last year, they reunited for Kiri, which shone the spotlight on foster care via a story a young girl’s abduction.

Now, for the final instalment of his loosely connected, issue-led trilogy, Thorne has created what is arguably his darkest work. The Accident is a four-part miniseries that unfolds in the fictional setting of Glyngolau, a small Welsh town long since deserted by major industry.

While the location may seem peaceful, the series is tainted with tragedy, with Glyngolau finding itself torn apart after a group of teenagers sneak into a large construction project designed to revitalise and breathe fresh life into the town. The rebellious teens unwittingly trigger a devastating explosion that causes the building to collapse, killing all but one of those who ventured in.

And so the finger-pointing begins, embroiling the town in a quest for justice as its close-knit community threatens to completely unravel.

For Mark Lewis Jones, who plays local councillor Iwan Bevan, justice lies at the story’s core. “Certainly this one is about justice, as well as many other things, obviously. But one of its main threads is justice, and I think that was Jack’s intention,” he says. “A lot of people don’t have a voice, and I think what the people in this community try to do is get their voice heard.”

The sense of community within the story and the close bonds between the show’s characters – with an ensemble cast that also features Sarah Lancashire (who also starred in Kiri), Sidse Babett Knudsen (Westworld) and Joanna Scanlan (No Offence) – struck a chord with the actors, as well as adding a layer of complexity to the story.

Genevieve Barr’s character, Debbie Kethin, is left widowed after the explosion kills her husband Alan, who was responsible for the construction site’s security. Highlighting how being part of such a small community impacts the apportionment of blame, she says: “There’s this sense of how a community looks at outsiders when we start to touch on blame – how quickly a community will look outside for the responsibility or blame rather than looking internally at its own people.”

Though Thorne’s latest story takes place in sleepy Glyngolau, it is by no means a regional tale, as the themes explored are universal, while the disaster at the show’s centre echoes the horrors of recent real-life tragedies such as the Grenfell Tower fire in London in 2017.

“I think the impact the accident has on the history of each of these families and the history of the community as a whole is something that will have an international impact. In all countries, there are communities that have been built like that,” says Lewis Jones.

“Jack tells human stories and they will always, hopefully, have a big impact on an international audience as well as the UK audience.”

Thorne – one of the busiest writers in the business, with film and theatre credits alongside his extensive television work – is often touted as one of the UK’s brightest writing talents, and the script for The Accident (previously titled The Light) lives up to that reputation, according to Adrian Scarborough (Killing Eve), who portrays community outsider Philip Walters.

“I just kept reading it, that was the extraordinary thing,” he says. “I got sent the first three episodes and I just stayed in bed and finished it. I didn’t get up, I didn’t make a cup of tea, I didn’t have any breakfast – I just I was just glued to it.”

The actor describes the writing as “delicious,” adding that it was “worth staying in bed for.”

Barr (Press) offers a similar take, claiming Thorne’s work is the kind of content actors itch to get their hands on. “I knew that with Jack’s writing there was going to be tragedy, light touches of humour and complexity,” she says. “As an actor, you crave that; you crave those characters that are multi-dimensional. Whenever you read Jack’s scripts, it’s always an absolute privilege.”

Lewis Jones also touches on the comedic elements of what is ultimately a dark and serious programme. “Through the humour, you kind of fall in love with the characters. It really shows humans in all their wonderful three-dimensional nuttiness, that they’re all flawed and funny and sad.

“[Humour and grief] are not oil and water; they mix really well because what they do, actually, is make the pathos stronger.”

The project, from producer The Forge and distributor All3Media International, is laden with sensitive issues and thus requires a steady operator in the director’s chair. Scarborough believes it found the right person in Sandra Goldbacher (Ordeal by Innocence, Victoria).

“The director was incredibly sensitive about making sure that those moments landed because it’s very, very hard to do that every day. Sandra balanced that beautifully – and she really took care of people along the way,” he says.

The praise for Goldbacher is echoed by Lewis Jones, who adds: “This story and these people and everything they go through required real sensitivity, a firm hand and careful handling. It couldn’t have been in better hands.”

With The Accident hitting British screens tonight on Channel 4 ahead of arriving on US shores via streamer Hulu, what can viewers expect?

“It’s really shocking, and I know what happens! If it can do that to me, it’ll have a profound effect on the audience,” Scarborough says, warning: “It packs a mighty punch.”