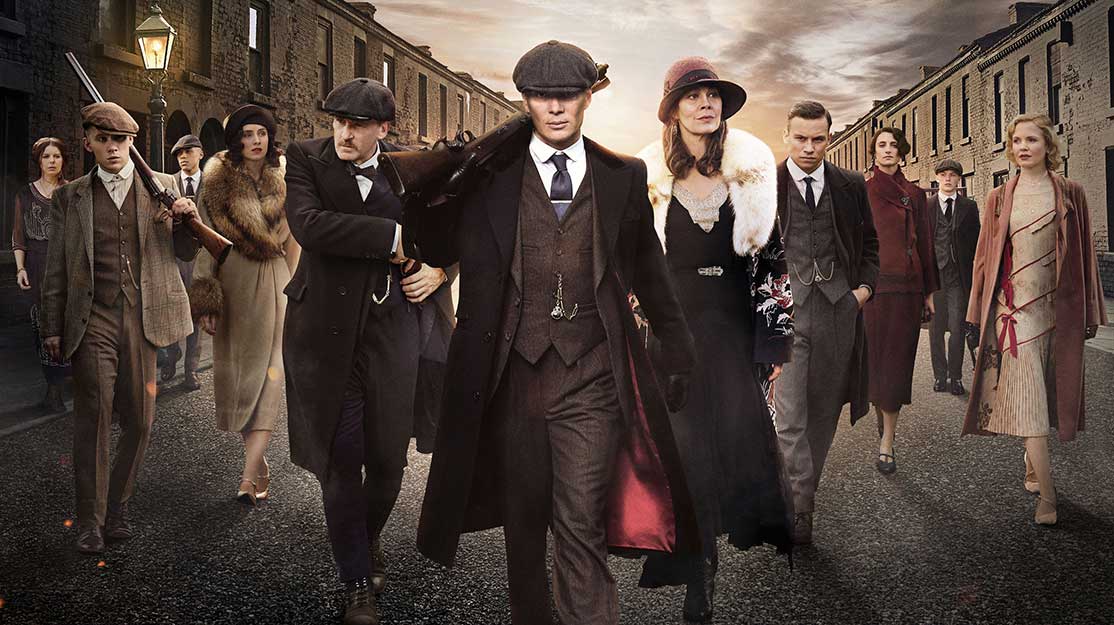 Like a fine wine, Peaky Blinders is getting better with age. But that’s not just my view – it’s one shared by its creator, Steven Knight.

Confident, self-assured and with its own unique swagger, Peaky returns to BBC2 in the UK this week running at full throttle, bypassing any gentle reintroduction to 1920s Birmingham and instead opening as the fates of the series’ heroes (or should that be villains?) are hanging in the balance, the executioner standing close by.

What follows is a spell-binding, bloody and savage hour of drama that sees Tommy, Aunt Polly, Arthur and the rest of the Shelby family estranged, apparently split with no sign of repair, until a new threat – one more determined and sophisticated than they have ever faced – looms large on the horizon. If they are to survive, they must put their differences aside and reunite.

It’s the start of what promises to be another mind-blowing season of an award-wining series that has only grown in critical and popular acclaim since its terrestrial debut in 2013. New fans are arriving every day by catching up with previous seasons on Netflix, with seven million reportedly watching the trailer for season four online.

“As it progresses, this phenomenon doesn’t seem to be running out of steam,” Knight says. “It seems to be getting faster and better and bigger in terms of audience and all that stuff. With the confidence of knowing the actors, the characters and the environment, it makes it a lot easier to be quite bold and confident. Each season gets better and I think this is by far the best.”

Part of that success is down to Knight’s writing, the production design, the music and the star-filled cast it is able to attract. This season sees ever-present Cillian Murphy (Tommy), Helen McCrory (Polly) and Paul Anderson (Arthur) joined by new faces including Adrien Brody (Luca Changretta) and Aidan Gillen (Aberama Gold), while Charlotte Riley (May Carleton) and Tom Hardy (Alfie Solomans) will return.

“It’s odd because we get incoming from the most amazing actors who want to be in it,” Knight reveals about the show, produced by Caryn Mandabach Productions and Tiger Aspect and distributed by Endemol Shine International. “It’s very tempting [to cast them all] but what we don’t want to do is turn it into this celebrity show. Most of them are American so it’s difficult to get them in, but with Adrien, he’s a brilliant actor and he was right for that role so it was good to get him in.”

Charlie Murphy (Happy Valley) also joins the cast as Jessie Eden, based on the real-life women’s rights campaigner of the same name.

“She has an amazing line to introduce the character,” Charlie Murphy says of Jessie’s first appearance, which takes place in the men’s toilet at Tommy’s factory. “It sums her up completely, being in that man’s world, being in the gents’ toilets, having to push forward and make a difference. She is an extraordinary woman.

“It’s strange there is not a lot online to investigate [about her], but the stuff I found… you can imagine what her life was like back then. She brought 10,000 people out on strike for equal pay in her late 20s. That alone today is extraordinary, to have that voice and strength, but back then it would have been phenomenal. She’s a very brave and powerful person to play. That’s so much fun.”

Those sentiments are shared by fellow cast members Cillian Murphy and Anderson. “This part is a gift,” says the former of playing Tommy Shelby. “For any actor to be given a part like this with the excellent calibre of writing and then to be told you can play a character like that for five years, it’s an absolute total privilege. He is quite exhausting, he’s quite demanding. He is really not like me – the furthest away from my personality. But I love him and it’s a privilege.”

Anderson picks up: “Steven writes these interesting, great characters and I have a lot of fun playing Arthur even at his worst, his lowest. It is a lot of joy. It’s really good to do it for such a long time. It’s my first experience of playing a character with this much depth.”

Helming every episode of season four is Irish director David Caffrey, who is finally getting the chance to join Peaky Blinders after missing out on season two due to conflicting schedules. He describes the show as one that “punches above its weight,” owing to its big set pieces, thriller elements and the fact it’s a costume drama despite having a relatively modest budget compared with similar US series.

“Because of the size of the show, you’re standing on the shoulders of the giants that have come before you, all the creative time, directors and production designers,” he explains, adding that the brief coming into a returning series is “always to be bigger, badder, bolder but with the same amount of money.”

“So it’s a question of getting myself, the cameraman, the designers, everybody to just look at what’s in the script and try to build on what’s come before us,” he continues. “I feel quietly confident we’ve done that this season.”

With an established series now fully in its stride, one of the challenges facing a new director can be to lead a team that knows more about the show than they do. But Caffrey (Love/Hate) says he enjoyed learning from the cast and helping them to push their characters forward.

“When you’ve got stars like Paul, Helen and Cillian, they still come to you and are very open about what you want but, in a way, they’re custodians of their characters and how they behave and what situations they find themselves in,” he says. “I learn from them and then I try to give them notes on where we think characters are going. Like anything, when you have a short amount of time, they’ve got to bring their own gift to the party, which they do in abundance.”

According to executive producer Jamie Glazebrook, every season of Peaky Blinders leans on a different genre. So while season one was a western, season two was a gangster movie and the third run drew parallels to a Hitchcockian drama. Back on the streets of the Small Heath slums in season four, which begins tomorrow, viewers can look forward to an action drama that also draws influences from 1952 feature film High Noon, in which an embattled sheriff must face a gang of killers alone.

“They’re under siege so they have to man up and actually get back into the driving seat and away from the country house world and back onto the streets to physically contend with quite a dangerous enemy,” says Glazebrook of the dilemma facing the Shelby family.

Filming took place in Manchester, Liverpool and Bradford, though the return to Small Heath meant the production team faced a dilemma of their own, as many of the locations used in season one have since been developed, forcing them to find alternatives for the location-based shoot.

“The scale of Steve’s writing against our budget and schedule has also been a challenge everyone’s risen to,” Glazebook notes. “We’ve also had to keep it fresh. We’ve seen a lot of shows set in the 1920s so, for example, costume designer Alison McCosh really went out there looking for 1920s dresses that hadn’t been seen before. She went to Rome and found dresses that almost needed to be put back together again because they were rotting away somewhere. Everyone’s really dedicated to making sure the show isn’t like anything else set in the 20s – it’s seen through a particular filter and it’s got that certain magic.”

Speaking to DQ ahead of the season three premiere in May 2016, Knight admitted his first love would always be film. But have those feelings since changed, with the continued success of Peaky and another project, Taboo, heading into a second season?

“The world has changed,” he responds. “I got lucky to get in early with Peaky. Priorities in Hollywood now, everything is changing by the day. The television phenomenon is now of equal importance to writers more than anyone, because writers have the power in TV, whereas they don’t in film. I’ve just finished a film – that’s great, and I love the 90-minute or two-hour length as a piece of work – but there are certain ideas you want 24 hours for, and that’s what television is great for. At the moment, there is an equal weight to both. Part of it is screens. Twenty years ago when people were watching television on those little things, what was the point? Now everybody’s got their big screens, there’s something about the whole thing that’s better.”

Knight has written every episode of Peaky, admitting that the show is so personal, he could never hand it over to someone else. And having won a double commission for seasons four and five, the screenwriter found himself in the rare position of being able to pen the upcoming six new episodes knowing there was still more to come. However, that fifth season, which is likely to begin filming in late 2018 for a debut the following year, looks set to be its last, if the writer’s plans hold firm.

“I know what direction it’s going in and what it’s going to be about,” he reveals. “I’ve always had the same destination in mind. It will be sad to stop and, if five has the same momentum that four has got, or more, maybe you do carry on. But at the moment that’s the plan, to finish at the end of five.

“I know when I want to end it [with the first air raid siren in Birmingham at the start of the Second World War] but that doesn’t necessarily mean that season five will take place in or around that year. I’m thinking there is a way to resolve the story in a certain year and then fast-forward to where it’s going to be.”