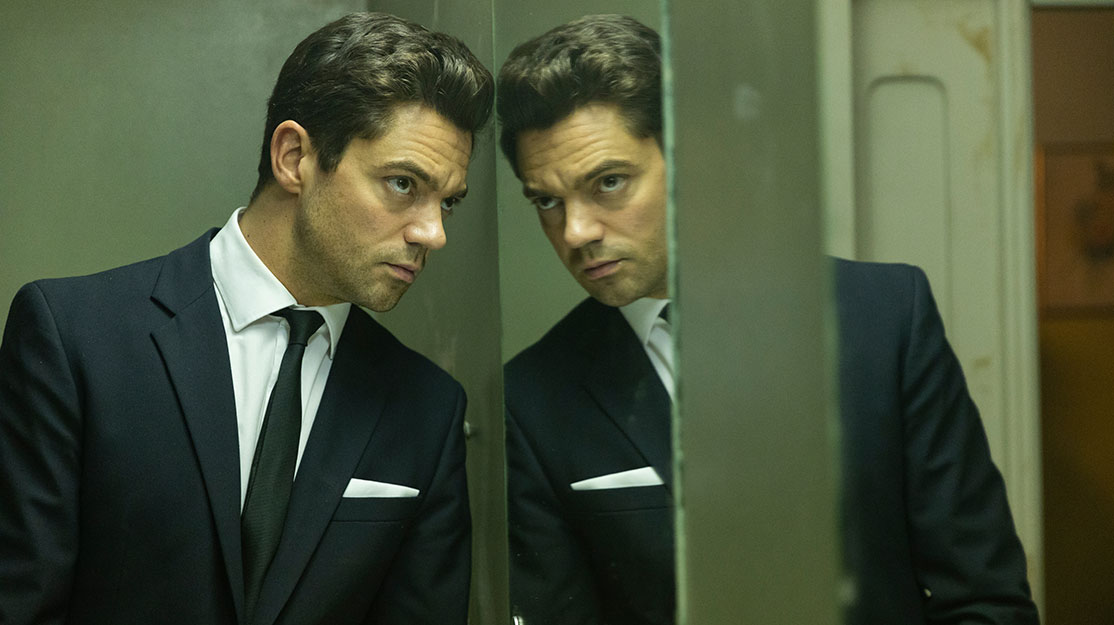 Spy City producer Britta Meyermann takes DQ into the world of this 1960s-set Cold War drama, in which Dominic Cooper plays a British agent determined to uncover a traitor in the period just before the building of the Berlin Wall.

Like Daniel Craig in the opening scene of his James Bond debut Casino Royale, the start of Cold War drama series Spy City finds Dominic Cooper having a fist fight in a bathroom. Unfortunately for Cooper’s MI6 agent Fielding Scott, the person trying to kill him happens to be a British diplomat, and when Fielding emerges as the last man standing, his actions leave him firmly in the bad books of his masters back at headquarters.

But while he is intent on finding out why someone on his own side wanted to kill him, it emerges that someone in Berlin is giving away all the secrets of the Western powers – the Americans, British and French. Fielding is then tasked with cleaning up the city and exposing, arresting or eliminating the traitor.

The origins of Spy City can be found in the offices of Munich-based producer Odeon Film, where producers Britta Meyermann, Mischa Hofmann and Ann-Kathrin Eicher discussed the idea of a series set in 1960s Berlin, around the time of the construction of the Berlin Wall.

“There are tons of shows and films about the Second World War and some 80s Stasi stuff, but nothing about this particular moment when the wall was being built, which is quite spectacular because no-one really knew the Russians were building a wall. It was a surprise,” Meyermann tells DQ. “Everybody thought they were up to something, but no-one really thought they would actually shut down the whole city and separate Berlin by building a wall and making West Berlin an island in the GDR [German Democratic Republic] somehow.”

With a plan in place to create a story around this event, Odeon also had ambitions to reflect the international outlook of Berlin at that time, with the city divided into British, American and French sectors in the west and the Russian sector in the east. But the search for a writer to tell such a story initially proved to be problematic.

“We started looking in Germany and then in the UK,” Meyermann explains. “It took us a while to find the right tone [for the series]. And then, through a common friend, we were introduced to William Boyd. When he said, ‘Yes, I would love to do this,’ we were really very thrilled. I thought he was really the perfect person for the show.”

Boyd, who has previously written spy drama Restless and adapted his own novel Any Human Heart for the screen, then wrote a concept paper and Meyermann pitched the series to German broadcaster ZDF, which became Odeon’s first partner on the project. The series is also coproduced by Seven Stories and Wilma Film, in association with German streamer Magenta TV, and is co-financed and executive produced by Miramax. ViacomCBS Global Distribution Group handles international sales.

Following the show’s dramatic opening scene, the story begins with Fielding taking charge of a mission to bring a scientist and his family to West Berlin from the east of the city, where he is being forced to develop a Russian space programme. It’s only when that task ends in tragic circumstances at the end of episode one does the main storyline – Fielding’s search for the mole within the Western intelligence services in Berlin – begin in earnest.

“There are very many subplots and side stories. That’s what makes it so intriguing, because on the surface it’s a very classic spy story,” Meyermann says. “It was important for us – and that’s what we really tried to achieve in the development process – to create characters and storylines about Berliners, the everyday people, to really get a feeling for the time period and not only be with those spies.”

Fielding’s duties are complicated further by his affair with Severine (Portail), as both question how far they can trust one another. “One of the key questions of most spy stories, and particularly of Spy City, is who can you trust and to what extent. That’s a dilemma all spies have because they shouldn’t trust; it would be naive to trust,” Meyermann adds. “It’s always hard for them to really trust their emotions, and this is what Fielding has to struggle with.”

The producers sought to stay very close to the traditional style of spy thrillers, particularly in relation to the time period in which the series is set. But while Fielding remains stoic in his outlook, emotional detail is added through the show’s ensemble of characters, while Spy City also dares to push the boundaries of the genre.

For example, viewers will gain an insight into the life of Fielding’s German assistant Eliza Hahn (Benesch), who seems not be as loyal as she appears, while her boyfriend Reinhart (Ben Münchow) is a musician who performs protest songs against the Soviet regime. By contrast, war photographer Ulrike Faber (Wokalek) supports the communist cause.

“We wanted to avoid the black and white thing that you normally have, with the evil Russians and the good Western allies,” Meyermann says. “We wanted to have a character that really represents that [the East German regime] was not bad for everyone. We try to bring a little bit more of the time period, the characters and the everyday problems of those characters into the show and not only have the spy storylines.”

Under the direction of Alexandre, filming took place in and around Prague in the Czech Republic and was completed in November 2019. While sets and locations were dressed to recreate 1960s Berlin, with some help from the VFX team, archive footage is also used intermittently to set the scene. The feel of the era was further enhanced by the sound team, which went into the archives of a GDR film studio and found sound recordings of the East German Trabant cars that were first produced in the 1950s.

“They sounded different from the cars in West Germany at that time,” says Meyermann. “Every production wants to be authentic and those cars actually don’t exist anymore. We were working with some of the best sound designers that Germany has and it was just interesting to really see how much work they did to make East Berlin sound authentic and not like West Berlin or any other city.”

Cooper was “top of the list” to play Fielding, and the production team were delighted when he responded warmly to the scripts, the actor later admitting Boyd’s Any Human Heart was one of his favourite novels. He also resonated with the ambiguity surrounding Fielding, who doesn’t give his emotions away easily.

“Bad things will happen to him so we do get to know him much better,” Meyermann notes. “But William’s intention was that you would always have some questions regarding Fielding, because he wants to show more of his emotions but he can’t. Everything he says or does has an ambiguity or a double meaning. At one point you think, ‘OK, now he really means what he says.’ And in the next moment you realise, ‘OK, he was always two steps ahead because that’s just how he has to be as a spy.’ He’s not easy to read and not easy to grab in the beginning. We will get to know him much more in further episodes. But, of course, he will stay a mysterious character.”

Spy City launched in Germany on Magenta TV last year and will have its free TV debut this autumn on ZDF. Before then, however, the series rolled out last week in the US, where it is available to subscribers of AMC+.

The series contains themes that are “universal to this very day, with different nationalities trying to cooperate but ending up building walls out of nationalistic thoughts,” Meyermann says.

“That’s why it’s important to never forget what happened. The interest internationally in that time period is definitely there. Many people just took it for granted that there was a wall at some point, but how it actually was built and what it was like for different nationalities to be in this place is something people don’t know and they will be surprised to find out more about this. But in the end, I hope it’s just a good and entertaining story that looks stylish and with great actors. I hope people enjoy watching it.”