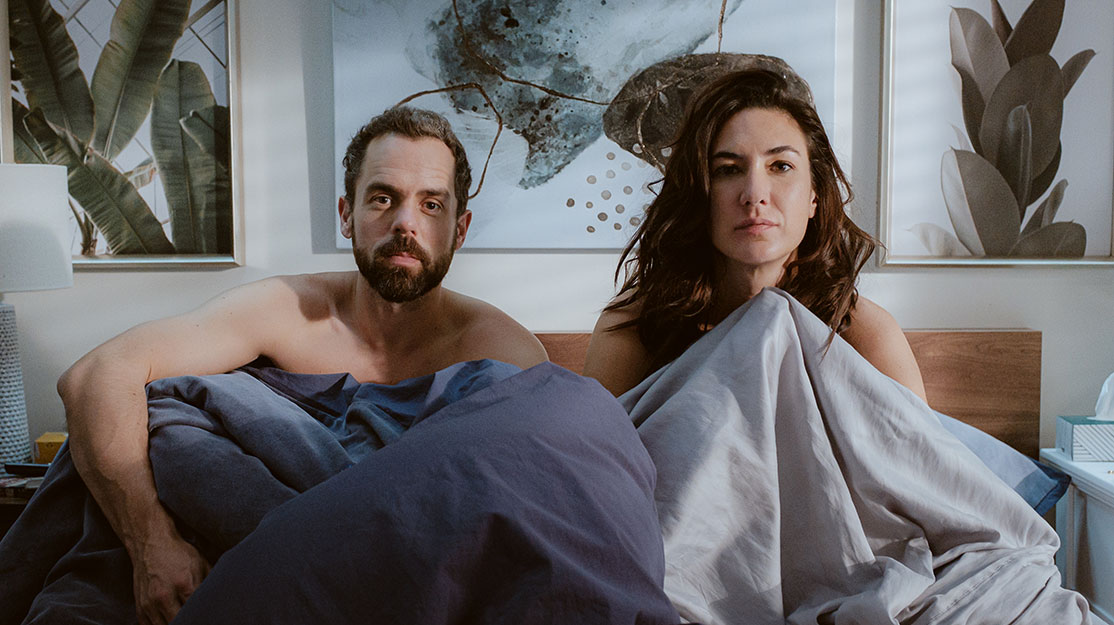 Executive producer Louis Morissette gets comfortable with DQ to discuss Quebecois series Entre Deux Draps (Pillow Talk), which shines a light on the relationships between four different couples and a pair of roommates.

When the Covid-19 pandemic first began to grip the world last year, the makers of Quebecois series Entre Deux Draps (Pillow Talk) initially thought that filming the show – set in the bedrooms of numerous different couples – would be an insurmountable challenge.

“When we got the greenlight to go into production, we just couldn’t do it with Covid. It would have been impossible for us to shoot the show without hugs and kisses,” says executive producer Louis Morissette. “We just decided to stop and wait for a year, and then they called me back and said, ‘Why don’t you go with real-life couples?’

“I wasn’t too sure if actors would want to work with their wives or husbands, but it has been amazingly positive. We received dozens of self-taped auditions from real couples wanting to play our couples, and that has been the best decision we have made. There is that special chemistry between them that at times can take a season or two just to place, and you get it from the get-go.”

The decision to cast real couples proved to be the magic ingredient for the series, in which the stories of four couples and a pair of roommates, from a variety of generations and backgrounds, are cut up into short vignettes and blended together across 10 half-hour episodes. The cast includes Pier-Luc Funk, Virginie Ranger-Beauregard, Guillaume Girard, Karine Gonthier-Hyndman, François Papineau, Bénédicte Décary, Fayolle Jean Jr, Simon Pigeon, Antoine Pilon, Florence Pilotte, Daphnée Côte-Hallé, Karim Babin and series creator Matthiew Pepper.

“It’s something really realistic. It’s important that people can relate and see themselves,” Morissette says. “The idea behind it is that the bedroom is the last refuge, the last place we can be ourselves and reveal our anxieties, fears and absurdities. It’s about those little situations in life where you can sit and reflect on things and discuss your day and what went wrong.”

One couple is facing up to the challenges of their 20-year age gap, while a gay couple discuss the possibility of becoming parents. The two roommates are notable for their differences, as one is shy and anxious about new relationships while the other has had lots of them.

“The comment we get the most on social media is people just tagging themselves and saying, ‘This is us’ or ‘That’s so you,’” Morissette says. “Writing the show, we’re always asking ourselves whether people understand what we are talking about. It’s not a niche show – it has to be really broad.”

That need for diversity is reflected in the writers room, with 18 credited screenwriters all working on the first season and bringing their own experiences to the show to make it as realistic and authentic as possible.

“At first it was chaos,” Morissette recalls of the early Zoom meetings between the writers, with up to 10 people on screen at one time. “Everybody was talking or nobody was talking. It’s useless. Then you just get into a certain rhythm and get to know each other, so some people are better when they work on a certain couple and we go along with someone else for another couple. We found our way. I just can’t wait to get into the same room as the other writers. The better scenes or sketches arose from brainstorming, which is a key part of the process.”

Also integral to the scriptwriting were the actors themselves. Morissette says that although the cast initially wanted to keep some space between themselves and their characters, they were soon sharing anecdotes and memories that made their way into the series. Director François St-Amant would also keep the cameras rolling at the end of scenes to capture any further action as the cast went off-script.

“He took the liberty not to cut straight away and asked them to do what they would do normally, and it was really funny,” the exec says. “These were the moments when you could see how they are in real life, and their real personalities emerged.”

With the show filmed during the pandemic, all the sets were constructed, while the cast and crew took every necessary precaution to keep themselves and their co-workers safe.

St-Amant was the first person Morissette called once he had partnered with Pepper on the series, knowing that the lol:-) and Bye-Bye director would be able to find the rhythm and comedy he was looking for. “I wanted to find that alter-ego you can work with so you don’t have to explain when it is funny and where it is not funny anymore – that split second that can fuck things up. This is a guy I worked with on different shows over the past two or three years. He’s so brilliant and a fantastic director,” Morissette says.

Finding that rhythm early in the development process was also key to the success of the series, meaning it didn’t need to be discovered later on during the editing process.

“All the couples came to the office and we read the scripts and went through them. Hearing them say the words, that was when we knew where it was good and where it was a bit long,” Morissette adds. “The readings were really helpful and we knew pretty much knew from the get-go the rhythm and tone we wanted.”

Following the KOTV-produced show’s launch on Bell Media’s Novoo earlier this year, writing is already underway on an extended, 20-part second season that will begin shooting in June. Morissette is also working on an English-language version in partnership with Novoo-owner Bell Media, while the series had its international premiere last month as part of Content Quebec On Demand.

“I’ve worked on hundreds of shows as a producer or writer or comedian or actor, so I can see when something is fairly close to our French-Canadian lifestyle and the way we look at things, but not Pillow Talk,” he says of the show’s universal appeal. “Coming from Florida or Berlin or London, we’re all stupid at times, we’re stressed out at times and we want to get intimate at times. These are couples having doubts and moments of happiness, sadness and anxiety; eating, relaxing or wanting to avoid their kids. This is something that is common in Canada and I’m sure it’s the same thing around the world.”