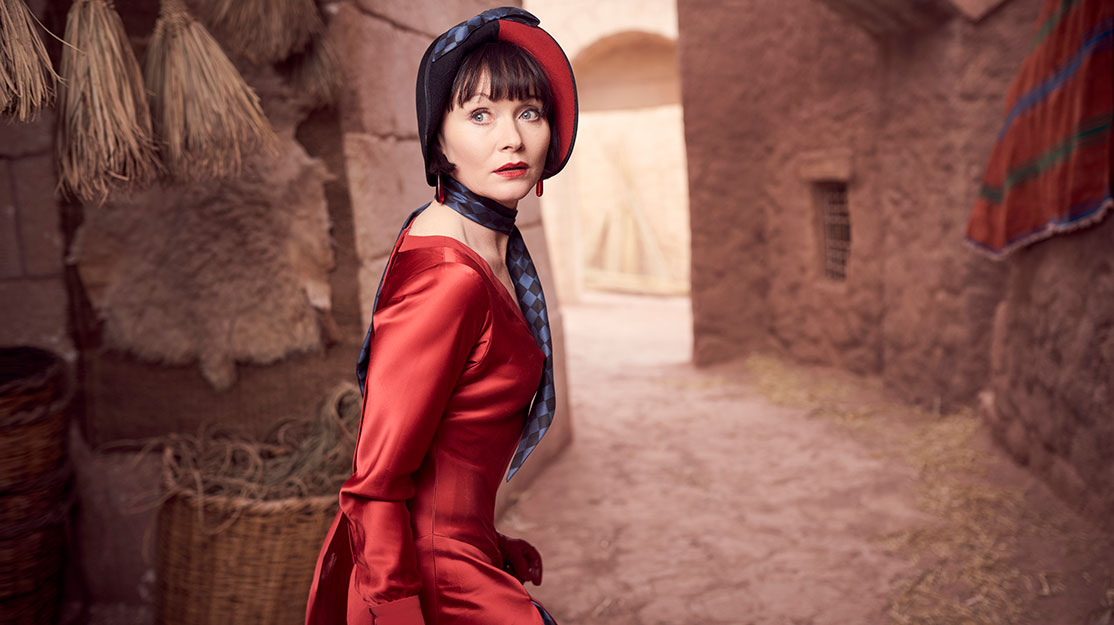 From starring in punk western True History of the Kelly Gang to reprising the beloved role of Phryne Fisher in big-screen adventure Miss Fisher & The Crypt of Tears, Australian actor Essie Davis tells DQ why she loves stepping into other people’s shoes.

While television has long been touted as the usurper of cinema, few people can have a clearer idea of how the two mediums can work together than Australian actor Essie Davis.

Both of Davis’ most recent projects – True History of the Kelly Gang and Miss Fisher & The Crypt of Tears – started life as movies destined for the big screen before transferring to streaming services or traditional channels.

Now at home in Tasmania amid the coronavirus pandemic that has shut down production on films and TV shows around the world, not to mention closing cinemas, the actor is reflecting on the fact that people will still be able to see both films somewhere, somehow.

“It’s a strange time, but luckily I’ve worked a crazy amount over the last couple of years. And even though it’s very sad that nearly everything I’ve done is meant to be in the cinema right now, it is a time when people really need entertainment, and they have the opportunity to access it in their own homes,” Davis tells DQ. “So hopefully everything I have been able to do will contribute to a happier or more fulfilling times.”

In the meantime, her director husband Justin Kurzel is continuing to work on new scripts while Davis is also looking at potential new projects in preparation for such a time when production can ramp up again. “There’s been a lot to do, but nothing that is imminent, because no one knows what’s going to happen,” she notes. Another film starring Davis, The Justice of Bunny King, was due to be touring the festival circuit this summer.

One thing that’s guaranteed is that when filming does begin again, Davis will likely be starring in projects that continue to push her out of her comfort zone, with ABC television series Miss Fisher’s Murder Mysteries proving to be her longest recurring role. Davis played the 1920s detective over three seasons before its feature film spin-off.

“One of my favourite things in the world to do is to step into other people’s shoes and to step into shoes I’ve never worn before,” says the star, whose other credits include Game of Thrones, The Babadook, Lambs of God, The White Princess and The Slap.

“I love challenging myself and not repeating myself. I love stretching myself and being stretched by others. I really endeavour to tell new stories and from perspectives I haven’t seen before. That is something I always have sought in my life. I never fancied being typecast and, somehow, in the roles that I have managed to earn and win and play, I have always managed to shake it up.”

Launched at last year’s Toronto International Film Festival before rolling out on Australian streamer Stan, True History of the Kelly Gang is an epic, stylised, fictionalised retelling of the life of legendary bush ranger Ned Kelly that reveals the influences that shaped the notorious icon’s life. Kurzel directed the movie, which was inspired by Peter Carey’s Booker Prize-winning novel of the same name.

The film spans Kelly’s younger years to the time leading up to his death, with the fractured and powerful love story between Ned and his mother Ellen, played by Davis, at its centre. The cast also boasts George McKay, the breakout star of Oscar-winning war film 1917, as Ned, plus Charlie Hunnam, Nicholas Hoult and Russell Crowe.

Davis says playing Ellen was one of the greatest experiences of her acting career, describing the real-life character as a mercurial, strong and wonderful woman.

“Justin and I have always wanted to work together on a substantial project. As he was reading the novel, he was constantly saying, ‘This is a great role for you.’ And when I read it, I knew it was too,” she says. “It is such a brave film. It’s really not a historical biopic. It’s such an alternate take on Ned’s story. It’s someone seizing back their story and saying, ‘Hey, everyone thinks they know my story. But this is my story. This is the true history.’

“It has this punk element to it as well, even though it’s an incredibly dramatic story of a young man who becomes an outlaw because of the way he’s been treated by his crooked oppressors and raised by his amazing mother, who is training him to survive in a country where survival is all you can do.”

Though the film’s title contains ‘true history,’ that assertion is immediately undermined by a title card that reads, ‘Nothing you’re about to see is true.’ Regardless of whether the film can be considered the real story of Ned Kelly, or a particular perspective of that story, Davis brought plenty of research to the role, which included filming in the real Melbourne jail where Ned was hanged after finally being captured.

“It’s a tiny little jail and it’s [built with] cold stone with tiny holes for your window,” she says. “Ellen did marry George King [her second husband, in 1874], a young man who was the same age as Ned, and she went on to have three more children with this guy and lived until her 90s and outlived most of her children. She was a renowned horse rider and clearly a sexy woman if she’s marrying someone her son’s age, so there’s a lot of fact in this, even though it says nothing you’re about to see is true.

“We thoroughly researched all the history books but we were inspired by Peter Carey’s novel, which asks, ‘What do you really know about someone?’ This is their history from their point of view. What if things had been different? What if the police had not been constantly harassing the Kelly family?

“Ellen didn’t want her child to grow up to be one of them, because they’re bad people. I love her spirit. I know that she’s manipulative but, to me, Ellen is doing everything right by her family. She’s teaching her kids to survive and to not want to follow a path of going into the law, because the law was corrupt. She’s certainly not a quaint, sweet lady in period costume. Ellen is a woman on fire, desperate to survive, and she’s going to make sure her children survive and that they stay with her and are loyal to her. I love that.”

Ellen Kelly is certainly a far cry from Phryne Fisher, the adventurous ‘lady detective’ of 1920s Melbourne who first appeared on television in 2012. Miss Fisher’s Murder Mysteries, based on Kerry Greenwood’s novels, ran for three seasons, ending in 2015, before being resurrected this year in a feature-length movie, Miss Fisher & The Crypt of Tears. Having debuted in theatres earlier this year, it has since aired internationally on Acorn TV in the US and Alibi in the UK, following deals with distributor All3Media International.

The story sees Phryne unravel a decade-old mystery concerning priceless emeralds, ancient curses and the disappearance of a forgotten tribe.

Davis says that while returning to Miss Fisher was a completely different prospect from playing Ellen Kelly, similar levels of work and commitment were needed. In particular, Miss Fisher & The Crypt of Tears “required so much extra because everyone needed to be reminded we were not making a television episode or a TV movie, but we were making a feature film and we really had to step up a level.”

She continues: “That was a lot of work in terms of making sure the script was at a reasonably high level to be able to take on an Indiana Jones-type story with a much lower budget than Indiana Jones. It still had to be a crafted story that required a lot more of myself in many other roles than just playing the character.”

Part of the film was shot in Ouarzazate, Morocco, where the production was able to film story elements set in Jerusalem and Palestine in locations and on sets previously seen in The English Patient and Kingdom of Heaven, against the backdrop of the Sahara Desert.

“It was hard work in a completely different and exhausting way,” she continues. “What we went through in Kelly Gang was brutal. We had floods and freezing snow and we were windswept. We were doing big fight sequences and breaking ribs and pulling out hair, but loving each other in amongst it all. Miss Fisher was completely different but still exhausting, and satisfying in different ways.”

A film wasn’t always on the cards, despite talk of taking Miss Fisher to the big screen early in the life of the series. Part of that stems from Davis’ own love of the cinema and the exuberance of the character, “an amazing heroine who is so naughty, gorgeous, capable, independent and dexterous and can speak any language, fly a plane, scale a building, dance a tango, flirt with the rich and support the poor,” the actor says.

“She’s as wonderful and glorious as Indiana Jones or James Bond, so why not have a feature film? That’s what I always thought, and never say never.

“It’s a beautiful world. The costumes are beautiful, all the men are dressed beautifully. There’s always a wonderful chemistry between Phryne and whatever suitors she may have, as well as her darling Inspector Jack Robinson [played by Nathan Page]. There’s nothing quite like watching people fall for each other. It makes you, as an audience, lean in. It’s a little piece of joy that people like watching.”

With a passionate international fan base continuing to follow Miss Fisher’s adventures, there would certainly be a clamour to see more of her exploits, in film or television. But Davis says any follow-up would be based on the reception to Crypt of Tears.

“Hopefully, people will watch it and love it – and who knows? It depends on the scriptwriting and the stories they can produce. It’s quite expensive to make an international adventure set in 1929, which is action, adventure, romance, comedy and murder mystery. Although we did it on the smell of an oily rag, it would require a little more to be as adventurous as I would like.”

Being an associate producer on Miss Fisher has certainly fuelled Davis’ ideas of pushing into new roles off-camera, with a desire to direct and produce. But she is unwavering in her commitment to acting.

“I would like to direct and I certainly want to produce. Even though I’ve never seen myself as a producer, I feel like I want to be able to facilitate and make the stakes high and make things better,” she adds. “However, my true love, my greatest love, is acting. I love it so much. I want to do it until I’m a little old lady.”