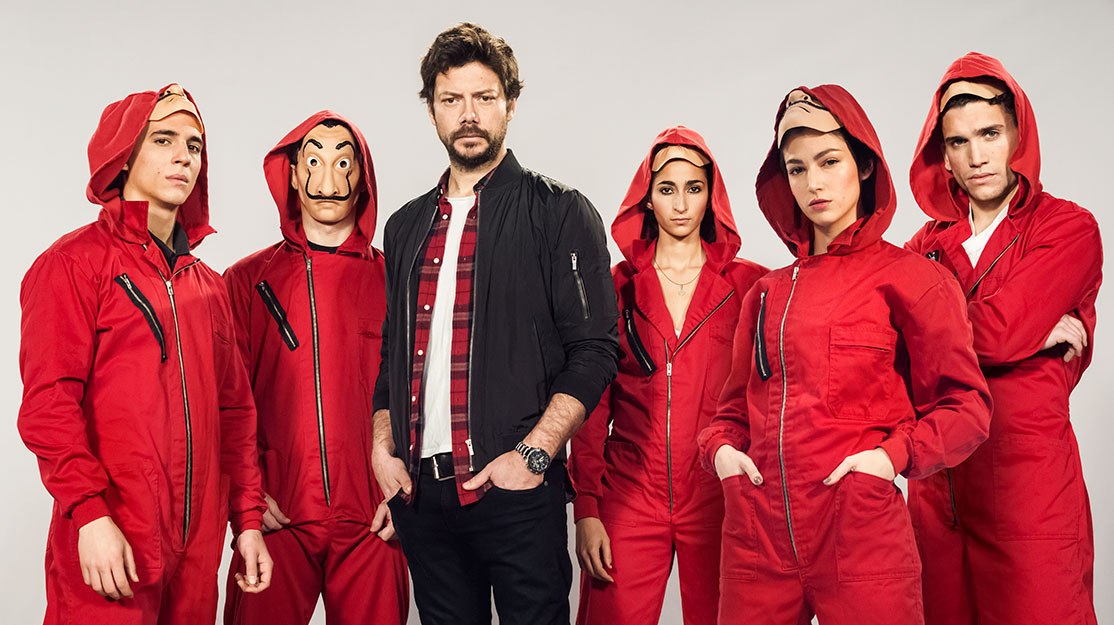 La Casa de Papel (Money Heist) became one of the most talked-about series in the world when it dropped on Netflix. DQ speaks to star Pedro Alonso about the unprecedented success of the Spanish thriller and the fate of his character, Berlin.

When Netflix announced early last year that Spanish heist thriller La Casa de Papel (Money Heist) had become its most watched non-English-language series ever, the chance to bring the show back for another outing was unsurprisingly too great to pass over.

The story, originally intended as a limited series told over two parts, followed the attempts of the mysterious Professor and his handpicked gang of criminals and thieves to infiltrate Spain’s Royal Mint and escape with €2.4bn (US$2.65bn).

Before the first footage of Parte 3 arrived, a familiar face was expected to be missing from the new season. Andrés de Fonollosa – better known by his codename, Berlin – was killed in the conclusion to the second part of the series – but his appearance in the trailer created fresh questions over the character’s role in the eight new episodes that were made available on Netflix worldwide last month.

When DQ meets Pedro Alonso, who plays Berlin, at the Monte Carlo TV Festival, the actor will not be drawn on his character’s involvement or any of the events that take place in season three. All that is known is that this time, rather than a bank heist, the group are out to rescue one of their own.

When Rio (Miguel Herrán) is captured, a distraught Tokyo (Úrsula Corberó) turns to the Professor (Álvaro Morte) for help. Armed with a bold new plan, they reunite the team to save him.

Before Netflix picked up Money Heist, which was created by Alex Piña (Vis a Vis) and first started airing on Spain’s Antena 3, there wasn’t even a plan for a third part. “It was basically a surprise. It didn’t do so well in Spain; it was average. It became a success with Netflix,” Alonso says of the show, whose first nine episodes launched on Antena 3 in May 2017, followed by a further six episodes in October that year. Money Heist was then acquired by Netflix, which edited and reformatted it, expanding it from 15 to 22 episodes that were also split across two parts. Part three was then commissioned by the streamer last year.

Nobody could have predicted the buzz around the series after it landed on the US streamer, says Alonso, describing it as an “incredible and amazing situation.” He continues: “If Alex had had the idea before, he would have created a formula to repeat it. It was amazing because the reception in Spain at the beginning was normal; the first chapter had a good reception but, after that, we went down with the public and the thing ended there. Then it went ‘boom’ in a really unexpected way.

Berlin stands alone among the Professor’s motley crew as arguably the most sadistic, psychopathic criminal on the team. So it’s testament to the quality of Piña and co-writer Esther Martinez Lobato’s scripts that, by the end, viewers’ sympathies lay firmly with him as he went out in a blaze of glory, sacrificing himself to allow the rest of the Salvador Dali-masked gang to escape with the money.

“He’s a bad guy, he’s a sociopath, he’s dangerous but, on the other side, he’s honest, he’s funny and he’s authentic,” says Alonso, who has also starred in fellow Spanish dramas La Embajada (The Embassy), Grand Hotel and El Ministerio del Tiempo (The Ministry of Time). “He’s able to cross the door of taboos and do what he wants to. He does things that in ordinary life we cannot do. For me as an actor, it has something really exciting. It’s amazing for me to see the complicity the public has with him. I love working with these kinds of contradictions. When I am going to be a sweet guy, I am terrible. With Berlin, you can go deep with this kind of game and it’s a privilege to play him.”

Watching Money Heist, it’s difficult to imagine any other actor portraying Berlin, so it’s not surprising when Alonso reveals he played a part in shaping the character. He praises Piña for listening to the actors when they made suggestions and the directors for taking risks on set.

“I remember one day I said to the first director, ‘I am going to improvise a bit. We can play safe with this role or take risks and provoke what will happen between the cast and the extras [who played the hostages].’ I pushed the expectations of Berlin as a character and when we opened this door, we began to enjoy it very much.”

Having been in the dark over his character’s fate when he signed on to the show, Alonso says one of the key revelations about Berlin and the Professor’s relationship was also something that developed during filming. “At the beginning, the Professor and I weren’t brothers. This was a conversation that started one day between Álvaro Morte and me. It was Álvaro who said we could be brothers. We rehearsed it and the energy was deeper, the possibilities were deeper and we mentioned it to the director. He said, ‘Forget it! Speak about it with the writers.’

“It was so clear to us that we said we were going to play it like we were brothers. Then this thing began to grow and one moment, they said, ‘OK, you are brothers.’ At the end of the season, I only said, ‘I love you little brother.’ But in this moment, all the crew were a family in some sense. This is proof of the surprises of the writing – but I didn’t know I was going to die.”

When it came to that final scene, all guns blazing as armed police finally infiltrate the Spanish Mint and chase down the thieves, “it was all very tense,” Alonso recalls, explaining that it was filmed at the end of an eight-month shoot. “As an actor, it was draining. It was very, very tough. There was no time to really think about how we would do the ending. We were suffocating; we were really drowning with all the extra work. I wish we would have had twice as long to do that scene, which we didn’t have unfortunately.”

However, Alonso believes the stress and strain of production on the ensemble cast brought them all together. “From the very beginning, it was very difficult to get along with each other. But we were all engaged,” he says. “We knew we had to cooperate, considering the job we had at hand. We’re all very different people but we were really enjoying it and having fun. It was very tough work, but engaging and fun. Then finally, at the end, love came out, so there was huge affection between all of us and everybody was very caring, and I think people felt that we all got along very well.”

With a fourth season of Money Heist now being geared up for production, bets are off as to Alonso’s continued involvement. “We had no expectations whatsoever that this was going to continue [this far], so I’m very happy, very thankful and grateful,” he adds. “We will see what happens next.”