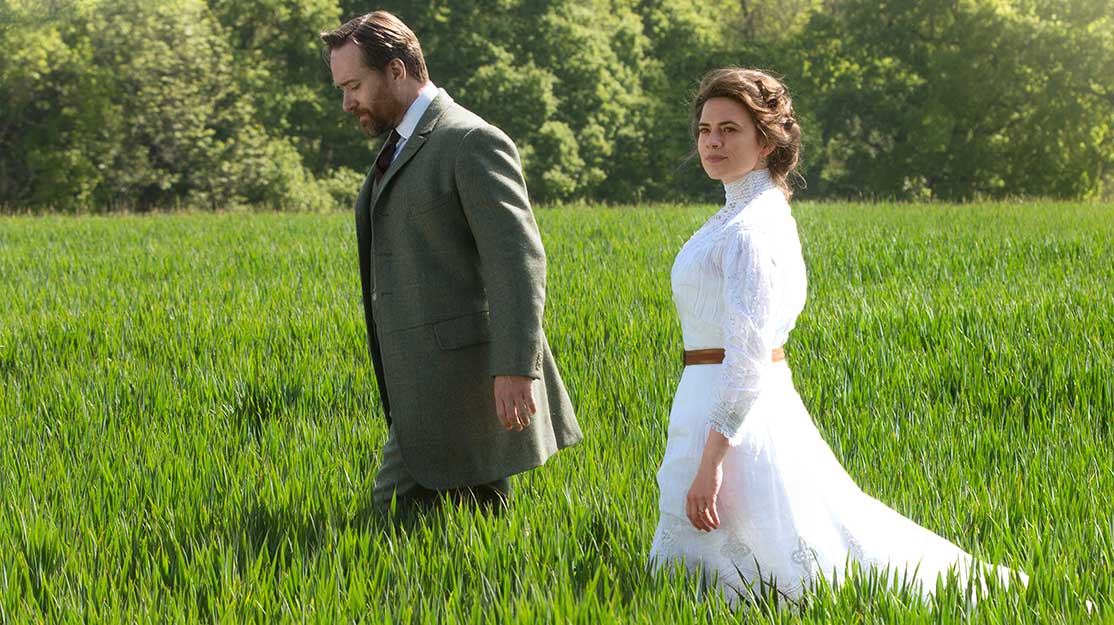 Beginning of the End

There is a stunning stately home overlooking a lake, an ornately decorated marquee and a beautiful bride in a wedding dress. This is the lavish setting for a key scene in a new BBC- and Starz-financed production of the seminal EM Forster novel Howards End. The only problem is the intermittent rain that is stopping filming every half-an-hour. But, as anyone who has ever filmed in England knows, that’s unavoidable.

“Poor Evie, getting married in the rain!” laughs Hayley Atwell, who plays the book’s central character, Margaret Schlegel, as she snuggles up in a warm coat on set (it may be April but it’s cold as well as wet). The scene being filmed at the West Wycombe Estate in the Chiltern Hills – when Evie Wilcox marries Percy Cahill – is key to the story as the worlds of the three families featured in the book come crashing together. No one comes out unscathed.

Howards End was made into a hugely successful Oscar-winning film 25 years ago with Emma Thompson, Helena Bonham Carter and Anthony Hopkins, but the time is ripe to make a new adaptation, says Sir Colin Callender, whose Playground prodco has made the four-part miniseries in association with City Entertainment and KippSter Entertainment. It is distributed internationally by Lionsgate.

“The story is about two smart, free-thinking women who are trying to make their own way in the world,” he says of the series, which debuts this Sunday in the UK. “If you think about what is going in the world, particularly here in the UK and in America – the way women’s roles and their relationships with men are being discussed – then you see just how of the moment the story remains.”

The drama looks at three families occupying different levels of the Edwardian middle class. There are the Schlegels, Margaret and Helen (played by Philippa Coulthard), orphaned sisters who live in an intellectual world of money, loosely based on the Bloomsbury Set, a real-life group of intellectuals. While on holiday in Germany, they meet Henry Wilcox and his wife Ruth, played by Matthew Macfadyen and Julia Ormond, who are wealthy capitalists.

At the start of the story, Helen is staying with the Wilcoxes at their house, Howards End, when she falls in love with their younger son Paul (Jonah Hauer-King). But Paul is penniless and meant to be heading to Africa to work for his father; the romance is hurriedly finished before it even really begins, leaving Helen heartbroken.

Back in London, the Schlegels meet struggling clerk Leonard Bast, played by Joseph Quinn, at a classical music concert. He is entranced by their intellectual world of chatter and music and wants to be part of it, but the economics of his situation make it impossible. Meanwhile, the Wilcox family come back into their lives when they take a luxury flat opposite the Schlegel home.

The screenplay has been written by Kenneth Lonergan. The American has an Oscar and a Bafta under his belt for last year’s movie Manchester by the Sea, which he both wrote and directed, but this marks his first television adaptation. “I looked at the book and had lots of questions. And every time I asked a question, Colin and the BBC seemed to get more excited,” laughs Lonergan. “It was an interesting challenge for me to adapt something where the characters have such a rich internal life but also where the story is focused on the challenges and the different strata of society.”

He adds that while most of the dialogue in his scripts came directly from the book – around two thirds of it – the rest was made up based on his experience of watching other period dramas “…and Monty Python.”

The producers and director Hettie Macdonald were determined that while Howards End would have all the same production values of other BBC costume dramas, it should have a modern feel.

It certainly looks the part, introducing us to a world that was changing, where horse-drawn carriages were being shunted off the road by motor cars. The series was filmed partly on a stage in Twickenham, south-west London, and partly on location. Finding Wickham Place, the home of the Schlegels, proved particularly difficult. Many of the streets the producers like were unavailable due to building work, so exteriors were shot in Islington, north London, and interiors were built on the stage.

Just as challenging was finding the production’s Howards End, the mystical house that belongs to Mrs Wilcox and starts and ends the story. Forster based the story on his own childhood home, Rooksnest, a country house near Stevenage that once belonged to a farming family called Howard. The house used in the show is a private home in Godalming, Surrey, which has rarely been used for filming before but, like Rooksnest, was constructed around a Tudor building.

While every effort went into making Howards End look right for the era, it also feels surprisingly contemporary. “I think there was a temptation for all of the actors to start acting all period drama,” says Quinn. “Once you are wearing the costumes, you feel you need to act differently, but Hettie was really adamant that we didn’t do that; she even joked on set that she was going to have a ‘period acting bell’ if anyone went ‘too period.’ The story is funny and sad and very relatable. They are people just like us; they just lived in a different time.”

Atwell says she was immediately attracted to doing the project, particularly once she knew Lonergan was involved. “I had seen Manchester by the Sea just a few days before being offered the job and the idea of him adapting this story was very exciting,” she reveals. “He hasn’t given it a sense of reverence and he has written it in such a clever way. There are so many layers to it, and so much symbolism; themes in it that we try to tap into and hit upon. But it’s also very funny. There are pages and pages of dialogue where five or six actors are overlapping. What is funny is the truth of playing people who are not listening to each other, they are just overlapping. It is very quick-witted.”

The actor started in period drama, with starring roles in Brideshead Revisited and The Duchess, but for the last few years has been best known as Marvel hero Agent Peggy Carter. Atwell first portrayed Carter in 2011 movie Captain America: The First Avenger, before going on to star in spin-off Agent Carter for two seasons on ABC. She admits she revelled in playing a character who was a little deeper than your average superhero.

“I have been doing Captain America [the movies and associated series] seven or eight years now and it is  full of people who I really love, but I am classically trained and I found this source material a lot more interesting, a lot more fulfilling,” Atwell says. “You can have conversations with our director and the other actors about what is in these scenes, what is the most interesting thing to play. You can analyse what is really happening because it is all really subtle. When you have to do a lot of exposition to drive the plot along, it can be tiring and a bit boring, with all due respect. When you have a job like this, there is so much to it. It was exciting creating such a rich inner world rather than just turning up and looking good and pointing a gun.

“Margaret is the heroine of the story. There is a line at the start of the book, ‘only connect,’ which is kind of the message of the story. The thing that drives her is a desire to connect people, which, given the context of the time, was quite unusual for a woman in her position and class. She’s just wonderful.”