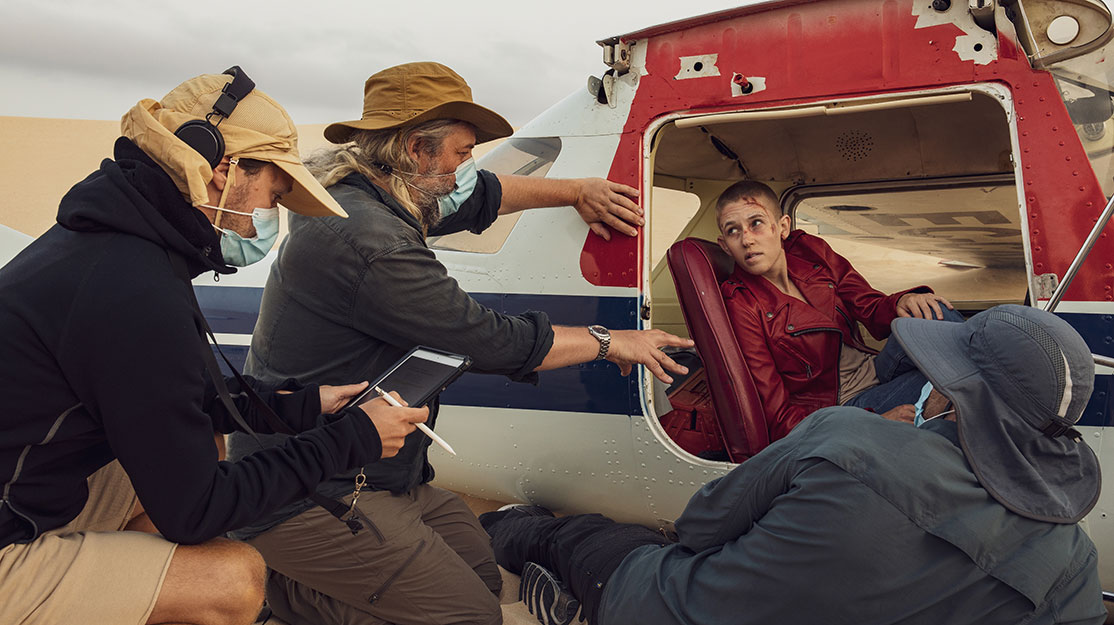 Before, 18-year-old Julie enjoyed the trappings of fame and fortune. A social media influencer with more than 150,000 followers, she loved make-up and fashion, hanging out with her friends and living in luxury thanks to her wealthy family.

But eight months after the plane crash that killed her parents and brother, a shaven-headed Julie emerges from a similar wreckage in a bleak and seemingly endless desert.

It is across these two timelines – the first eventually catching up to the second – that we discover how a single tragic event sends Julie’s life spiralling out of control and leads her to travel the world, looking for the will to love life again or a way to end it all.

Julie’s story plays out in eight-part drama Kamikaze, HBO Max’s first Danish original series and also its first series commissioned and produced in Europe to launch day-and-date in every territory where the streamer is available, across Europe, the US and Latin America.

Debuting this Sunday, the show stars Marie Reuther as Julie, who embarks on a journey of rediscovery after finding that the material possessions with which she used to surround herself no longer hold any value and she is forced to find a reason to carry on. Her wild and turbulent trip will take her from her native Denmark to the far corners of the world.

Based on Erlend Loe’s novel Muleum, the series is written by Johanne Algren, directed by Kaspar Munk and produced by Profile Pictures’ Ditte Milsted (Sex), who believed the story would match the platform’s ambition for original series that push the boundaries of storytelling and filmmaking.

“From the beginning, we wanted to do a series with very original tone, a different format and lots of different layers,” she tells DQ. “After the first meetings with HBO, we quite quickly got in touch with Johanne because we thought she was a perfect match. The book is written by a man and we thought it was important that it be adapted by a woman, and also that it was a younger woman who could really get into Julie’s mindset.”

Algren (Holiday) was a fan of Norwegian author Loe’s often humorous novels but hadn’t read the book on which Kamikaze was based. When she did pick it up, she was immediately struck by the plight of the young female protagonist, which plays out in the form of a diary. That element is subsequently mirrored in the video diary Julie records while stranded in the desert – just one of the playful techniques used in a series that also features animated dream sequences.

“When I read it, it really struck me because it had this young woman living in a parallel reality, and that’s always been interesting to me in writing,” Algren says. “It also struck me on a personal level because I lost my mother at 13, I moved out of home at 15, I travelled around the world from 16 and then moved to London. I had that clear view of Julie’s energy and the way she would have that strong force but, at the same time, be cut off from her emotions and try to keep people at a distance, feeling betrayed by the world. That young energy, you actually do want to show. The mixture of that and her grief is something I could relate to.”

Many of the events in the novel do not actually take place, instead playing out in Julie’s mind, and this proved to be one of the challenges facing Algren as she started dramatising the story for television.

“In the book, she ends up in the desert, and I made the choice to bring that forward to the opening and use it more in contrast [with her journey],” she says. “I had to work with more of the drama and the actual things that could happen to her on such a journey, because it almost felt like more of a theoretical journey in the book. It’s often the case, when it’s a first-person narrative, that a lot of things are just in the mind.”

As the story bounces back and forth between the present day, in the desert, and on Julie’s journey around the world, the desert scenes prove to be a window into Julie’s mindset as she moves between emotions “on the way to life or death,” the writer adds.

“When I began casting for the project, I didn’t know it was based on Erlend Loe because it was a secret,” says Reuther. “But I could sense this quirkiness in the script, even though if you just read the story, it can seem kind of dark. I could feel this vibe, and then before I finished casting, I talked to a person I know about the project and she said, ‘That’s Erlend Loe,’ and he’s one of my favourite writers. It’s a great story, it’s a universal story and it’s very different from a lot of Danish series about young people. Sometimes [those shows are] more about drinking beers in Copenhagen, but this is a real story. Julie has big problems. It’s a big thing she’s going through.”

Before her family’s accident, “she’s very lucky, she has everything,” Reuthen says of her character. “She has a family, she has lots of friends and she’s in control of her own life. She knows what she wants to do. She doesn’t really have any problems. Her whole family is based on having goals, having plans and being ambitious, so she’s always been occupied by her future.

“When this thing happens, it’s like lightning from a clear sky. Suddenly, she discovers she’s out of control of her life, and that changes her in the sense that destiny begins to take her life in a new direction and she has to deal with this in her own way – not in a ‘diving into your emotions’ way but more in an active way that makes her occupied with not feeling the pain too much.”

The actor likens Julie’s experience to being at a party surrounded by people and yet feeling utterly alone. “Julie is in her own bubble when this accident happens. She feels like no one around her can relate to her, and she cannot relate to them either. She’s alone,” she says. “I could tap into that way of thinking where you believe no one understands you.”

On set, Reuther spoke a lot with director Munk (Herrens Veje) about what happens to her character in particular moments. “Kaspar would say ‘It’s not that, it’s this,’ and we’d do it again… and then we’d do it again. To get into that flow was just amazing. I remember when we had really long days and we finished at nighttime, sometimes I would just get high [with exhilaration] by getting through the day, like ‘We made it!’ and I could just keep on going. It was incredible. It was a lovely collaboration.”

That each episode of the series also has its own style or tone would also influence Reuther’s performance during the course of production. “She’s really different in each episode, and the environment, the arenas and settings are different, so it’s always about trying to adjust to that,” Munk says.

“The beautiful thing about the show is it takes us to so many different places and on so many different journeys. It’s not just a story taking place in one street in Copenhagen. We’re moving to different parts of the world physically, and emotionally in the way Marie’s acting is very different in each episode. As a director, it was really fun to go down a path that was really dark, coping with trauma and loss, and then the next episode is completely different in style, tone and dialogue. Marie was so brave and it was joyful to work with the material and tell the story through the acting.”

Munk knew Loe’s book and had always wanted to film it, so when he was approached to direct the series, “it was easy to say yes.” Much of the “crazy stuff” in the series was already in Algren’s script so, from the beginning, the challenge was figuring out how to make the series practically. Episodes are also marked apart by different colour schemes, aspect ratios, camera lenses and music.

“It was a playground for a director,” he says. “Sometimes it was also an important tool just to orientate yourself in the story so it’s easier for the audience to follow where we are. Most of the decisions were taken to focus on character, and the camera became a mirror because we’re alone with her so much. Even when she’s with other people, she’s alone in a way. We were always trying to get the camera to be very close to her and also for Marie to have the feeling that there is somebody in the room to react to.”

For Milsted, it was clear very early on that the production would need to travel around the world for a story that sees Julie go from city to city and spend a large portion of time in Seoul, Korea. The varied backdrops of the Canary Islands also doubled for Mexico, while additional filming took place around Denmark and in London, among other locations.

“We had to create the idea she was travelling around the world,” the producer says. “We also used archive material to create this sense of Julie travelling to different places. But when Covid-19 hit, we had a lot of challenges because it was very difficult to find out how we could continue filming abroad. It would have been easier had we been only shooting in Copenhagen. But we had HBO and the Danish Film Institute behind us, so I felt confident we could finish the show.”

Production was halted exactly halfway through its schedule in March last year when lockdowns began to be imposed, before filming picked up again in late July. “I’m proud of how we managed to finish without having to compromise too much,” Milsted continues. “It was a very big puzzle, particularly with the actors who had new engagements, new haircuts and beards. Those were just the minor problems – then you had the bigger problems of finding new locations. It was tough.”

From the moment Julie’s father sends her a text message that reads, ‘We’re crashing. I love you. Do what you want,’ the show’s protagonist is sent on a crazy and often reckless ride, with  her increasingly erratic behaviour in the wake of her family’s death living up to the title of the series.

“It’s a unique and intriguing story. It’s very exciting watching a show where anything can happen,” Milsted surmises. “The setup is that she can do anything, and I like that we have such a funny, sarcastic and fresh protagonist who travels around the whole world. It’s a very moving story from the very beginning; I was very touched by it. I hope our style and ambitions will shine through. I really hope the audience will find it original.”