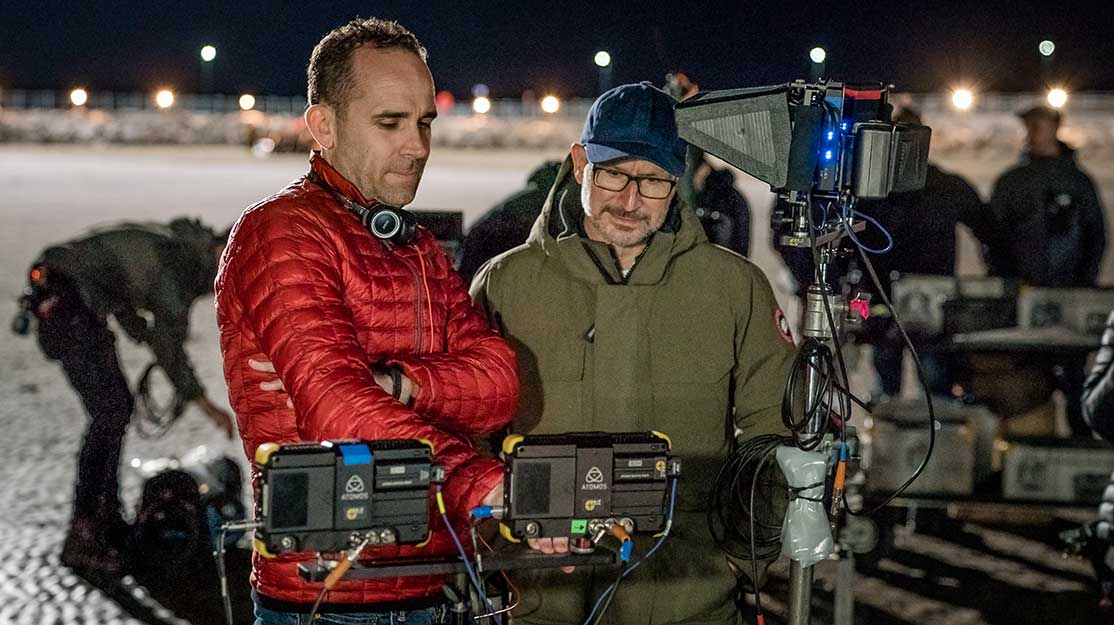 A family liaison officer discovers a personal connection to a missing persons case in ITV drama The Bay. DQ speaks to lead director Lee Haven Jones about filming the series, casting Morven Christie and why he believes actors are often neglected.

They are often in the background of a tragedy, offering families and individuals support at the toughest of times. Yet rarely are police family liaison officers and their sensitive role pushed to the forefront of a television drama – a surprising fact considering the range of crime series on air.

Step forward ITV drama The Bay, which stars Morven Christie (The A Word, Ordeal by Innocence) as Detective Sergeant Lisa Armstrong. Described as a fierce and hard-working family liaison officer, she is assigned to a missing persons investigation – but quickly discovers she has a personal connection to this frightened family, one that could compromise her and the investigation.

Set in the English coastal town of Morecambe, the six-part drama comes from writer Daragh Carville (Being Human) and co-creator Richard Clark. It is produced by Tall Story Pictures, with ITV Studios Global Entertainment handling distribution.

It was the location, as well as Carville’s script, that drew lead director Lee Haven Jones (Shetland, Vera) to The Bay. Haven Jones helms the first three episodes, with Robert Quinn (Home Fires) picking up the back three.

He first read the script in March last year, describing it as a “real page-turner” that finds the balance between believable characters and narrative drive. “That’s not always the case,” he explains. “Sometimes it falls on one or the other. There’s also a fantastic central character. Lisa’s fun, feisty and flawed. There’s a fantastic reveal at the end of part one. Then in part two, there’s a moment where Lisa decides not to reveal the truth. That decision ricochets out and has unbelievable consequences as the story unfolds.”

The drama is particularly personal to Carville, who wanted to set it in Morecambe, a stone’s throw from his home in nearby Lancaster and a town literally on the edge, a classic seaside destination for holidaymakers now struggling against the availability of low-cost holidays abroad.

Haven Jones says there was never any doubt the series would be filmed in Morecambe, with interior scenes shot in Manchester. The director calls it an “under-represented” part of the world – one that he found had a cinematic scale.

Inspired by the depictions of the British seaside in film, television and photography, most notably by artists including Martin Parr and John Hinde, he says The Bay doesn’t have the “technicolour” qualities of series like Broadchurch, but does expel the British cliché that it’s ‘grim up north.’

“We’ve sprinkled it with the broadest of colour. We’re trying to impact the glamour of Morecambe,” Haven Jones says. “It’s just a fantastic place to film – the tidal estuary with the sands and finding glamour at the promenade. It’s what we don’t normally get in a seaside town in the Lake District. It’s an ideal place to film.

“The only frustration, owing to the budget, was we couldn’t film more there. A constant refrain of mine to the producers was it’s called The Bay – we want to see the bay. I pushed to get as much of it in the drama.”

Appearing alongside Christie in the series are Jonas Armstrong (Troy), Tracie Bennett (Scott & Bailey), Lindsey Coulson (Funny Cow) and Chanel Cresswell (This is England 90), among others. Haven Jones says “the great thing” about working on The Bay has been the freedom he has been afforded by executive producer Catherine Oldfield, which included casting the ensemble drama.

“Morven read for it and I pretty much knew from the moment she started reading she was perfect for the role,” he recalls. She’s a consummate actress. I’d known of her for a while. She’s done it all. She was at the Royal Shakespeare Company and is a fantastic stage actress. She has a wealth of stage and screen experience. She’s unflappable.

“I remember a conversation with her early on where she found playing a police officer asking questions very difficult. She’s usually used to being interviewed. I said, ‘Don’t panic, you will get your chance!’”

Christie’s Lisa is the heart of the show, providing an emotional core to a drama that otherwise might seem quite procedural, with detectives attempting to solve the mystery laid out at the beginning of the story.

“A lot of work I have directed has been procedural,” says Haven Jones, who is now working on the next season of Doctor Who. “The key for this project is to find it has more emotion to it; it has more heart. It’s a bit of a hybrid between a police crime procedural and family saga. That’s the USP. The police case unravels and then is solved, and all the characters you meet in the first episode are involved in some way.”

With a background as an actor himself, Haven Jones says part of his approach to directing is to focus not only on the visuals but equally the performance of the cast. “Actors are surprisingly neglected by directors,” he asserts. “The thing I’m really pleased about is the quality of the performances. We have mentioned Morven but we’ve also got Jonas and Chanel. They give emotionally charged performances that feel honest and raw to me.

“We did quite a bit of rehearsal, which is also sometimes neglected because some directors think it’s good to get that rawness of the first take [on camera]. I’m of the opinion it’s fantastic to have rehearsals because it unearths layer upon layer of that performance. You never get as much as you want, but we did have a significant amount of time here. It’s just very useful to help figure out what drives these characters and what they are concealing.”

Nothing about The Bay is high-concept, Haven Jones adds, claiming the story’s strengths are in its believability and the relatability of the characters. “They’re very ordinary folk going about their lives in an awful situation. It’s there to be identified with,” he concludes. “It’s just a cracking good story with really good actors doing their thing in a strikingly beautiful landscape.”