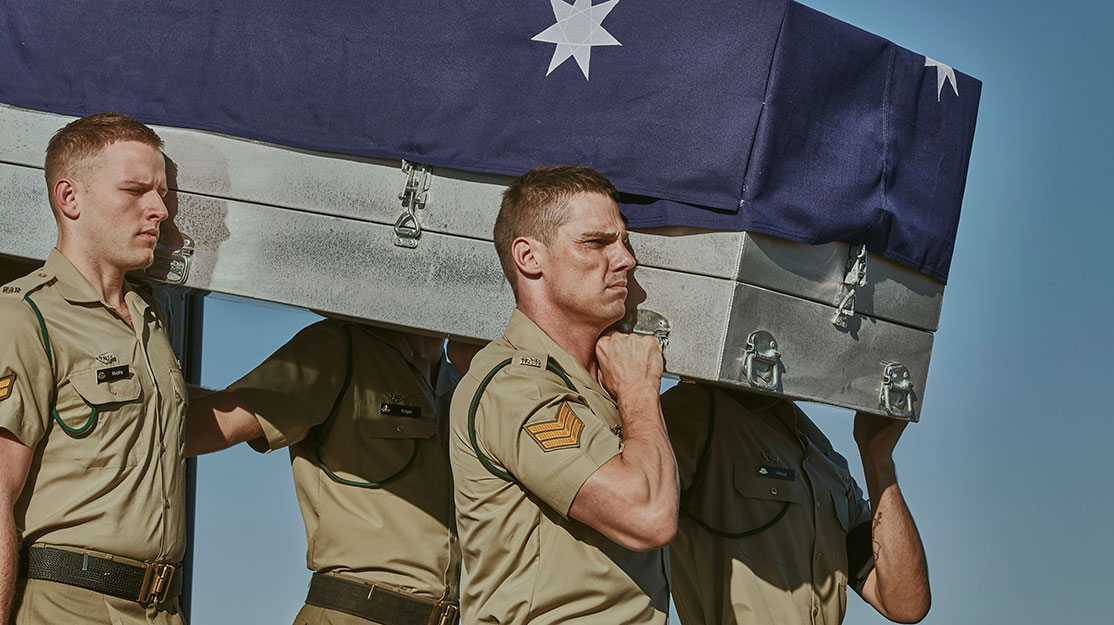 Commissioned by Foxtel, Goalpost Pictures’ Fighting Season is the first Australian miniseries dealing with the plight of Australian soldiers who served in Afghanistan. DQ finds out how it came together.

During frequent trips to the US several years ago, Australian producers Kylie du Fresne and Rosemary Blight were struck by the fact that US military personnel were the first passengers to be invited to board planes, or had their own airport lounges.

The Goalpost Pictures co-founders contrasted that recognition with the near-invisible status of Australian soldiers at home, including those who suffered PTSD after serving in Afghanistan.

Realising this subject had never been explored in an Australian television drama, they began fleshing out their ideas for a miniseries with writer-producer Blake Ayshford. Penny Win, head of drama at pay TV giant Foxtel, loved the concept and agreed to fund development.

The result is Fighting Season, a six-part drama/mystery that will premiere on Foxtel’s Showcase channel on October 28. UK-based distributor Sky Vision is handling international rights.

Set in 2010, the story follows a platoon of soldiers who are recalled from Afghanistan after the death in combat of their captain, Ted Nordenfelt, during a mission marred by mistakes. They arrive to a near-empty airport with only their families to greet them. The mystery of Nordenfelt’s death unfolds with devastating effect on the men, their loved ones and friends, testing the bonds of mateship and the army’s culture of self-sacrifice.

Ayshford wrote three episodes and Belinda Chayko, Kylie Needham and Tommy Murphy each wrote one. During his research, Ayshford met with a number of serving soldiers and one who had just left the army after undertaking multiple missions to Afghanistan. These men became the basis of Fighting Season’s characters and stories. He also interviewed family members on how they coped with the absence of partners or fathers for six months or longer.

“It feels very true to life; we could not invent some of the stories we were told,” says Ayshford, who has a personal connection to the subject due to his father serving as an airman, meaning the writer lived on several army bases around Australia as a child. “It’s a deeply human story, a gripping mystery with a lot of heart. I went to a screening for buyers from 60 countries in London and you could have heard a pin drop.”

The 2010 setting was chosen because Australian forces suffered a particularly heavy toll of casualties and the defence forces’ top brass were resistant to the phenomenon of PTSD. The following year saw the emergence of support groups such as Soldier On.

“I hope it makes people think about what we’re asking modern soldiers to do and the risks they take, both mentally and physically – particularly mentally,” says du Fresne, who produced with Elisa Argenzio. “What they see and what they experience is outside of the realms of experience of most Australians. I hope our show gives a voice to that experience and shines a different light on what we ask soldiers to do in the name of the safety of our country. If a soldier watches the series, we want him or her to say, ‘I can see my life.’ That, to me, is truth.”

US-based Kate Woods came back to Oz as the setup director, helming four episodes, while in his TV debut emerging director Ben C Lucas called the shots on the other two. “I loved the scripts, which just got better and better, and it’s an important subject,” says Woods, speaking from the Albuquerque, New Mexico, set of Netflix drama Messiah, which was created by Aussie Michael Petroni. “Australia has not looked at the situation of its veterans in Afghanistan, our longest war, and the effects when they come home.

“We send these young men to war and teach them to kill. And when they do, and it becomes part of their life, how do they assimilate that into themselves as human beings when they come back home? And what responsibility do the armed forces have for that?”

Woods, whose recent credits include Agents of S.H.I.E.L.D., Unsolved: The Murders of Tupac and the Notorious B.I.G. and Underground, admired Ayshford’s work on such shows as Barracuda and Devil’s Playground and had long wanted to collaborate with Goalpost Pictures.

Keen to give opportunities to new voices, Goalpost hired Lucas after he made his feature film debut on Wasted on the Young, followed by OtherLife, to which Netflix acquired worldwide streaming rights. Coincidentally, he was developing a feature about returned servicemen and PTSD when he heard Fighting Season was in development.

“I actually hunted this show down. It’s always a subject that’s been really close to me,” he says. “I’ve not been in the military. Plenty of my family have, and I have friends who have been through some quite extraordinary ordeals, so there’s an academic interest in the subject, not necessarily a personal connection to it. But I’m interested in the storytelling that comes out of what these men and women go through. It’s also quite a sensitive subject and you want to get it right.”

Woods says she and Lucas had different approaches to the project, explaining: “I always come from inside the actors and create the work around that; he came from an image-making perspective, but we always arrived at the centre.”

Emerging screenwriter Chris Squadrito, who began his career as a development assistant to Ian Collie and Rachael Turk at Essential Media while completing a masters in screenwriting at the Australian Film Television and Radio School in 2013, served as the script editor. Ayshford says: “Chris is very talented, one of those writers who thinks internationally. He is really going places. I am fairly hands-on when it comes to giving feedback on scripts to writers, so Chris acted more as a script editor in the UK sense: he worked with me a lot, giving general and later detailed feedback on the scripts.”

“It just seemed both timely and important to have a sort of bookend to that drama,” Win says. “One hundred years after Gallipoli, the myths and legends that had grown up around it and the increasing focus of ANZAC Day meant it had become almost an alternative Australia Day. Blake wrote a compelling treatment about the reality of the Australian soldier coming home – a world we seldom see on screens – that beautifully highlighted the gap between the myth and the reality.

“We knew it was a story worth being told. Kylie and Blake made sure there was truth in everything on the page and screen. There was a lot of research and input from those who had served. The heart of this story shines through – it’s not so much about the battles, the war, it’s about coming home after and not being forgotten.”

Ewen Leslie (Safe Harbour, Top of the Lake: China Girl) plays Nordenfelt, a ruthless leader and excellent soldier who is seen in flashbacks. The character suffers from PTSD but fears he could be discharged if he seeks the help of a psychiatrist.

Filming the show gave Leslie a greater respect and appreciation of the armed forces, observing: “If I had a family member who had returned from war, I would treat them with as much empathy and delicacy as possible.”

Kate Mulvany (Secret City, Miss Fisher’s Murder Mysteries) is Ted’s widow, an army engineer and captain who suspects a cover-up. The narrative struck a personal chord with Mulvany, the daughter of a Vietnam veteran who suffered from severe PTSD and died two days after the actor landed the role. “The moment that I read this script it was so familiar to me, it was heartbreaking. I had complete compassion for these characters, complete empathy, and I know them because I’ve lived them,” she says.

“At the end of each shoot day, I called my mum and said, ‘I played you today, mum, on screen.’ These women deserve to have a voice; they are the forgotten soldiers, they are the allies of our soldiers on the home front and they deserve to have their stories told too, and that’s what Fighting Season does so beautifully.”

Jay Ryan (The CW’s Beauty & the Beast, Canadian miniseries Mary Kills People) plays Sgt Speedo Collins, a father-of-two who has undiagnosed PTSD and is the only one who knows how the captain died. “I interviewed a lot of soldiers; a lot were special forces because a lot of our stories are inspired by true events from special forces,” Ryan says. “Some of those soldiers had experienced PTSD and were still going through it and some were not. So it was interesting to hear what these real guys on the ground had experienced and how they felt about an actor portraying a soldier with unacknowledged symptoms of PTSD on screen.”

As most of the soldiers are aged under 21, the producers hired emerging actors including George Pullar, Marco Alossio, Julian Maroun and Paul de Gelder. The cast also includes Sarah Armanious as Speedo’s wife, Jay Laga’aia as a minister of religion who is the father of Alossio’s character, Sabryna Waters, Lex Marinos, Lucy Bell and David Roberts.

“It is a war drama but it’s not about war. It is about the futility of war, the fallout, family and healing. And ultimately people will come to watch Fighting Season because it’s not glorifying war, it’s simply about how we pick up the pieces and how we move on from that,” Laga’aia says.

A team led by production designer Paddy Reardon built a section of an Afghan village in a quarry near Sydney, which was raided by the Australian soldiers. The wide-angle battle scenes were filmed in the vast expanse of the outback near Broken Hill. Other scenes were shot in the suburbs of Sydney where the soldiers and their families lived. Shooting the raid in the village was the biggest challenge, involving three camera teams. The production also received permission to film the annual ANZAC Day march in Sydney, in which thousands of people participate, including serving and former armed forces personnel and their families.

According to Woods, DOP Geoffrey Simpson achieved a magic realism with some sequences, portraying the nightmares experienced by the soldiers. She drew a lot of inspiration from her hero Kathryn Bigelow’s Zero Dark Thirty and The Hurt Locker, noting: “No one else can tell stories like that in a masculine world.”

Costume designer Damir Peranovic relished the contrast between the faded greens of military uniforms with the “at home” uniform of cargo shorts or jeans with graphic T-shirts. After watching documentaries including Illustrated Man by New York-based photographer and director Sophy Holland, hair and make-up designer Angela Conte discovered nearly all the men got tattoos when they came home from Afghanistan: some from sadness, others from shame or guilt. So she designed tattoos that were relevant to each soldier.

Founded 10 years ago by Blight, du Fresne, MD Ben Grant and Cass O’Connor, Goalpost Pictures operates on a broad canvass encompassing feature films as well as TV projects such as supernatural drama Cleverman, a copro with New Zealand’s Pukeko Pictures, which SundanceTV acquired for US audiences. Its feature slate includes The Sapphires and the upcoming Top End Wedding, both directed by Wayne Blair, and Leigh Whannell’s sci-fi thriller Upgrade, a copro with Jason Blum’s Blumhouse Productions.

Earlier this year the prodco signed a first-look deal with London-based global distributor All3Media International. Du Fresne adds: “Because we have always done films and television, we can be a bit dextrous in the way we move between the two, with talent and with stories. On the TV side, there are genuine global opportunities to make international content. Of course, it is a much more crowded marketplace than 10 years ago and the competition is greater, so we have to think very cleverly about the kind of projects we are doing.”