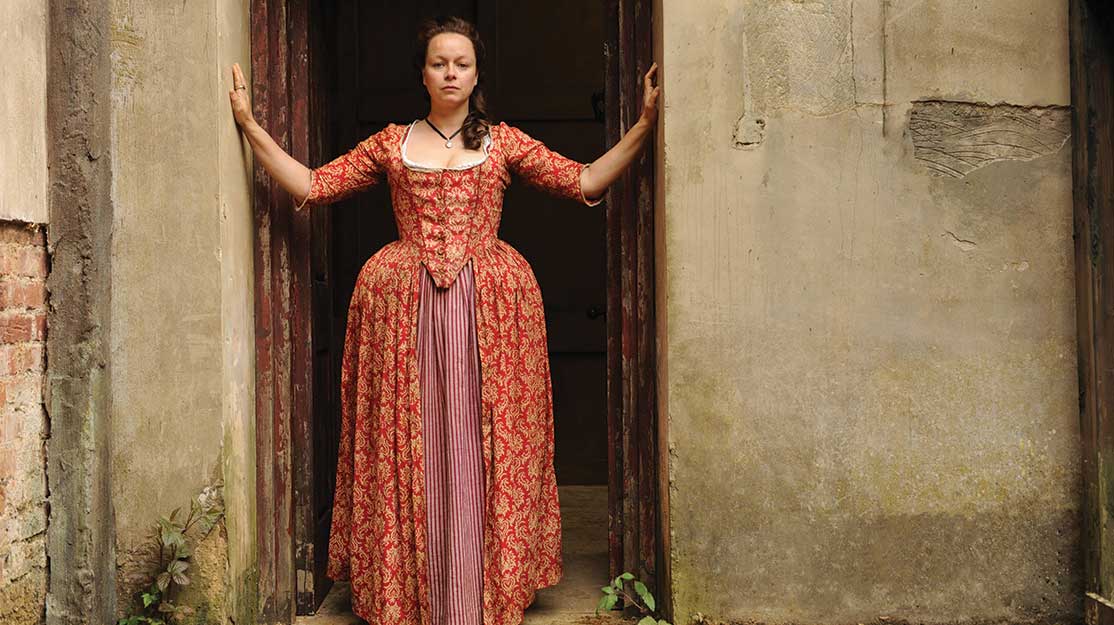 Battle of the brothels

Co-creators Moira Buffini and Alison Newman reveal the journey they took to bring Harlots, a period drama about rival brothel owners, to the small screen.

An 18th century mansion on the outskirts of London proved to be the perfect location for a period drama that presents a new take on what Rudyard Kipling described as the world’s oldest trade – prostitution.

But Harlots, which was co-commissioned by UK broadcaster ITV and US streamer Hulu, is more than just a sex saga.

Set against the backdrop of 18th century Georgian London, the eight-part series follows Margaret Wells and her daughters as she juggles her roles as mother and brothel owner. When her business comes under attack from Lydia Quigley, a rival madam, she decides to fight back, even if it means putting her family at risk.

Harlots is based on an idea from head writer Moira Buffini and Alison Newman. Distributed by ITV Studios Global Entertainment, the drama is the first commission for Monumental Pictures.

Buffini adds: “We have honoured their tenacity and courage and ability to survive, rather than dwelling on the ‘poor them’ aspect.”

Harlots had been in development, in some shape or form, for four years before finally getting the greenlight. Part of the delay was down to Buffini and Newman’s insistence on making the show they wanted to make and finding partners to support that vision. With US SVoD platform Hulu and ITV, they finally found the freedom to bring their ideas to life.

The pair first worked together on 2001 play Loveplay. Written by Buffini and starring actor Newman, it centred on transactions between men and women across the centuries. From that starting point, they both had ideas of how to take this story forward.

“One of the things about Harlots, which is why we love it so much, is that really this is one profession that never changes,” Buffini says. “Yes, we’re writing about Georgians but we’re absolutely writing about the modern world as well. That feeling really comes through.”

Their aim was to create a drama with a large female cast, telling a story from the female gaze. “Obviously this world is perfect for that,” Newman notes, “and we wanted a cast peopled with characters of all different backgrounds and ages and we’ve managed to do that, which is great.

“Once we really started looking into the world, we did a vast amount of research and discovered that an awful lot of Georgian London was built on vice. These women had disposable income so they put it into property and bricks. At that point, London was the capital of the world; it was a boom town, expanding massively, and the women who were successful in this trade were businesswomen.

“There is nudity,” she adds, “but if people are expecting some kind of cheap thrill, they’re not going to get it watching Harlots. Whatever you think it is, it probably isn’t that thing. If you think you’re going to get a political feminist diatribe, it isn’t that either.”

The main story – with rival brothel owners at its centre – evolved over much time and discussion, they admit, as the pair began storylining ideas before bringing fellow writers Cat Jones, Jane English and Debbie O’Malley, exec producer Alison Carpenter and script editor Katie Kelly into a writers room to thrash out individual episodes.

“I’ve never run a writers room before or even been in one, and it was brilliant,” says Buffini, who is best known for films such as Tamara Drew, Jane Eyre and Byzantium. “We just had such a laugh. It was really tricky, difficult and hard work but it was always a very creative atmosphere. Together, we worked from big sketches to tiny detail and we worked out all our storylines in that room. Then each individual writer went away and wrote their episodes and we all came together again to get them to the screen. What you realise about television when you start on the path of it is that it just becomes a bigger and bigger collaboration as you walk the path.”

Collaboration was a key part of the process for Newman and Buffini, with the latter admitting she is “not the kind of writer that is an omnipotent being.” In the early stages as the writing process continued apace, lead director Coky Giedroic did the bulk of casting. But as filming wore on, the creators found themselves becoming more involved in production, and say they found overseeing the editing process particularly rewarding.

Newman adds: “While we might not have been on set because we were storylining in the writers room, we signed off on everything from casting to design. And now that the episodes are in the edit, to be involved in shaping them is brilliant. It’s fascinating and really enjoyable.” 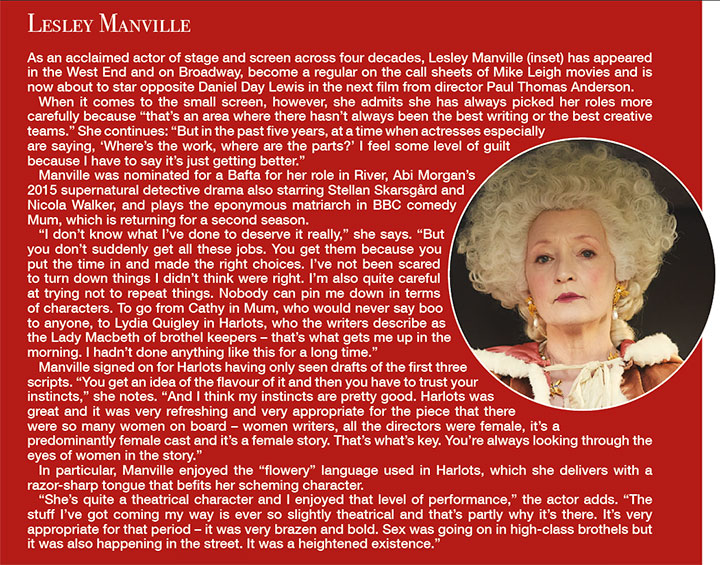 As befitting the flamboyant Georgians, Harlots was destined to be a big, noisy and colourful affair. “It’s not often you see the finished show and think, ‘That’s it,’ but with Harlots, I do think that,” Buffini reveals. “We’re both so proud of it. It’s the show we talked about years ago, but it’s better.”

The cast is led by Samantha Morton (pictured top), who stars as Margaret Wells opposite Lesley Manville (River) as Lydia Quigley. Jessica Brown Findlay (Downton Abbey) plays Charlotte, Margaret’s eldest daughter and the city’s most coveted courtesan who is coming to terms with her position in society and her family.

Buffini says the cast were “an absolute pleasure and a privilege to write for,” adding that each of them brought something surprising and different to their character.

“Lydia could have been such a villain but that’s not how Lesley played her,” she continues. “She’s very warm and funny, quite maternal and a horrendous villain. And what Samantha has brought to Margaret in such a subtle way is this sense of relationship between damage and resilience. It’s so beautifully observed and a real credit to Sam. Jess, she’s just absolutely amazing.

“You don’t want to prescribe too much to an actor, especially actors of that calibre, because if you have written the script well enough, it will just be there in the action and in the dialogue. I like very sparse scripts that aren’t full of character description. Usually I allow myself one sentence to describe each character and then you leave it to the actors to find. That’s where a writer can really overstep the mark.”

By the end of season one, which launched on both ITV Encore and Hulu in March, every character has their story resolved, a move designed to ensure viewers aren’t left standing on a cliff edge awaiting a potential second season.

“Statistically there are not enough female stories by female creatives, but we forgot how unusual Harlots is,” Buffini adds, citing all-female directing and writing teams and its female-led cast. “We just got used to it being women producers, women directors, this big cast of actresses, but not forgetting our wonderful men.

“There are so many untold women’s stories. When you think of how many father-son stories you’ve seen and compare that with the number of mother-daughter stories you’ve seen, there just aren’t as many. There are lots of stories about brothers but there aren’t as many about sisters. As a dramatist, it’s amazing because it’s all uncharted territory and you can do anything. There’s so much more that is new and exciting about being in this world where a woman drives story.”