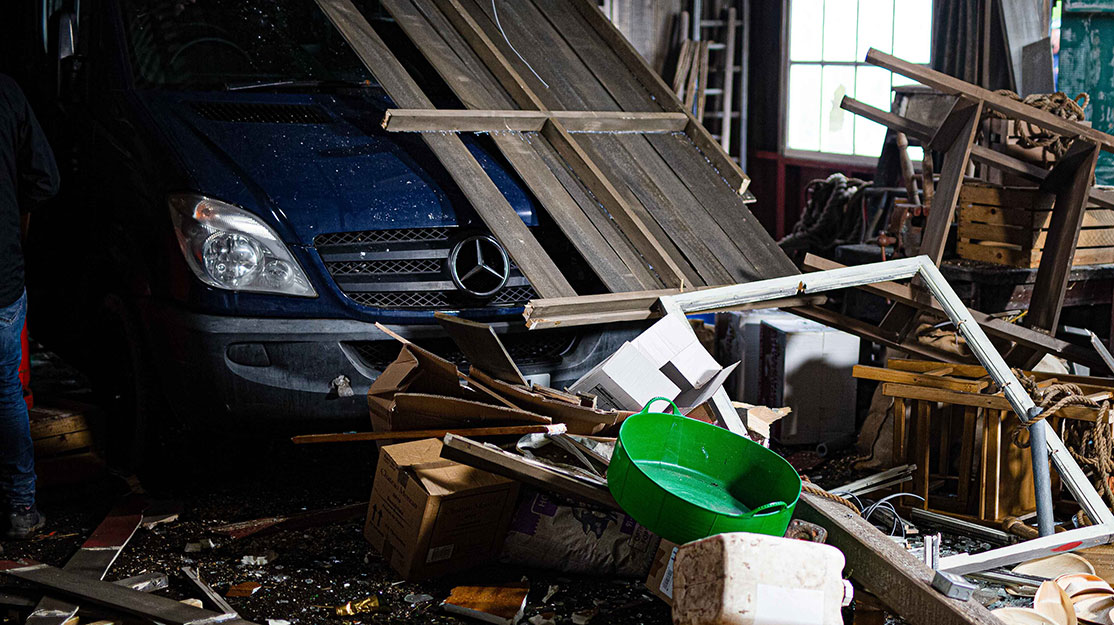 While British soap Emmerdale was among the first TV productions in the UK to resume filming after the first Covid-19 lockdown, a recent episode saw the show return to dramatic form with its first stunt sequence since before the pandemic.

A special run of episodes broadcast on ITV last week began with a 999 emergency call and a flash forward to a glimpse of three different figures lying in hospital beds. Then through the week, details of what happened were slowly revealed, foreshadowing a tragic end for one villager, until on Thursday, the events that led those characters to be admitted to hospital were revealed in an hour-long episode.

The final dramatic stunt saw Jimmy King (Nick Miles), temporarily blinded by the glare from the sun, lose control of a truck and plough into a barn – the scene of Paul Ashdale (Reece Dinsdale) and Mandy Dingle (Lisa Riley)’s upcoming wedding, where Liv Flaherty (Isobel Steele) is talking to Paul.

Here, director Dave Beauchamp and stunt coordinator Andy Godbold discuss their work behind the scenes to plan and film the devastating set piece while complying with the ongoing Covid-19 restrictions on set.

How did you prepare for the stunt under such stringent restrictions?
Beauchamp: Before the scripts were even written, we had meetings at the stunt location with the stunt, special effects and design teams to discuss what we would like to achieve and to agree with our in-house Covid safety managers what was possible, as well as to establish safe, separate working zones for crew and actors.

This then allowed us to design and build the barn to suit and get the best possible coverage of the crash and explosion while working within strict Covid safety guidelines. Then I had to start planning how I wanted the finished episode to play out and look, putting together camera plans, set requirements and equipment needs so we could start pulling everything together. Throughout that process, there were constant discussions with all the teams to pin down the finer details, such as how close the stunt double could be when the barn explodes and where I could safely put cameras.

Godbold: I was called for the first recce last December, when myself and the relevant HODs met at the barn location. It was at this time that Dave explained what he would like to see for the action.

How did you coordinate the stunt?
Godbold: On that recce, the first part we spoke about was the van crash, where Dave explained we would see the van veer off the road and crash into the barn, which would cause part of the barn to collapse and trap the character Paul under a beam.

I wanted to make the action more dynamic as soon as the van had left the road, as it seemed quite a distance for the van to travel before crashing the van into the barn, so I suggested adding some debris such as pallets and straw bales for the van to crash through before hitting the barn.

I also suggested it could appear that Paul could actually be hit by the van. In reality, it would have been a very big ask for the Jimmy stunt double, Joel Conlan, who would be driving the van, to hit an exact mark while crashing through the barn to give the illusion that Paul had been hit. Consequently, I got Bickers Action on board, who set up a very clever rig called a Damper Vehicle Stopping System, which involved the back of the van being on a wire and hydraulic damper and meant we could be very precise about the stopping point where we would place the Paul stunt double, Rob Jarman.

A good stunt is about creating the illusion that something is way more gnarly than it actually is, and we certainly did this for the van hit. I stood only eight feet away from the edge of the van when it ‘hit’ Rob, and it even fooled me. It looked like Rob had been savagely wiped out. However, the reality was that it barely touched him and he didn’t feel a thing! Another major part of creating this illusion was the clever construction of the lightweight breakaway props and the breakaway end of the barn, built by the art director, Jordan McHale. Myself and Jordan had a number of meetings to agree the types of props used that would be smashed through by the moving van, yet not harm Rob, the Paul double.

The last part of the action sequence was the explosion. This involved a number of meetings and recces with Ben Ashmore from the Special Effects Company. I wanted the Liv double, Emma Britton, to stand in a safe position [away] from the flames, yet still be engulfed by the fling [prop] debris that would be mortared out of the barn beyond the flames. We could cheat a safe distance that Emma would stand from the flames with a longer camera lens; and, for added safety, we made sure that her costume and wig were fireproof and that any exposed skin was covered with a fireproof gel.

Can you share some behind-the-scenes secrets about the actual stunt?
Beauchamp: We couldn’t have the real actors close to the explosion for safety reasons so used a mixture of stunt doubles and green-screen shots to make you think the actors were in real jeopardy.

A mixture of gas and petrol is fired out from chutes fixed securely just inside the barn windows and doors, and lightweight debris is also fired at the same time, so you get a huge explosion and then burning debris raining down, which looks great and extends the action. In the edit, you can repeat the explosion slightly from different angles to make it feel even bigger.

Andy, did you have rehearsal time with cast?
Godbold: Yes, I would always ask for rehearsal time with the cast before shooting. Even though the actors would not be performing their own stunts, there would be elements of the action that would need to be overlapped with the stunts. All the cast members were great to work with, and the overlapping parts of their action were performed great.

How did you film the stunt?
Beauchamp: We only had the one chance for the explosion so I had seven unmanned cameras and one manned camera on it, two of which were slow-motion cameras to give us more options in the edit. It was a massive explosion and one of the cameras went up in flames but the other seven got some spectacular angles. I saw a shot of the crew watching the explosion and they all jumped back about two feet because it was that big and loud.

What challenges do Covid restrictions present for filming?
Beauchamp: We designated strict, segregated areas for cast and crew, meaning we couldn’t put cameras on the set where the actors would be performing, so everything had to be filmed from behind these safety lines. This meant planning ahead to get the best possible angles for the cameras, which would normally be able to go wherever the action was.

We also had to do without some of the usual camera equipment, such as track and dolly, as the grips would be less than two metres from the camera operator. Simple things like the actors having a fight on screen had to be cheated to two metres apart or mannequins used for some close-contact shots. For one particular grapple, we had two stunt performers bubble-up for two weeks prior to the shoot so we could see the characters apparently have a close-contact fight. Because we started planning so far ahead, there was nothing that caught us out on the day – but we did have to think outside the box. See if you can spot a pair of false legs operated by an actor using a two-metre-long pole!

Godbold: In a nutshell, it adds a lot of time to the whole filming process. I’ve been working on a number of different productions throughout the pandemic, and the way that each production handles the Covid restrictions is slightly different. On most productions, like Emmerdale, we are all tested regularly and kept the two-metre distance at all times. It was the first time I had been asked to self-isolate a few days prior to a job. The other three stunt doubles were also asked to self-isolate, which meant our stunt team could then work as a bubble within a two-metre distance of each other, which was essential for us with the stunts, from the fight, which was close contact, to applying the fireproof gel to Emma Britton.

How tricky was this stunt to pull off in lockdown?
Beauchamp: This was probably the most challenging thing I’ve done for a long while. The stunts have a natural order to them but it was like having to do it with one hand tied behind your back. You knew what you wanted to get on screen but the conventional ways weren’t always an option, so you had to constantly solve new challenges. A big part of directing is problem-solving, so I loved every minute and I am very proud of what everyone at Emmerdale has achieved. I really hope our audience enjoys the episodes as much as we all did making them.

Are you pleased with what you have achieved, especially as it’s the show’s first stunt since the pandemic started?
Beauchamp: I’m extremely pleased and relieved! It does look spectacular and I am so happy for everyone involved. This would have been a big challenge in normal times but to be able to achieve this with all the Covid restrictions in place is amazing. There was a lot of planning and hard work involved and I think that comes across on screen.

Godbold: It was great that Dave let us all have so much input from the beginning, and the result of the stunts was actually better than I could have expected. All the individuals and departments worked extremely well together. Dave was very approachable and was always open to ideas, which helped us get such a fantastic end result.