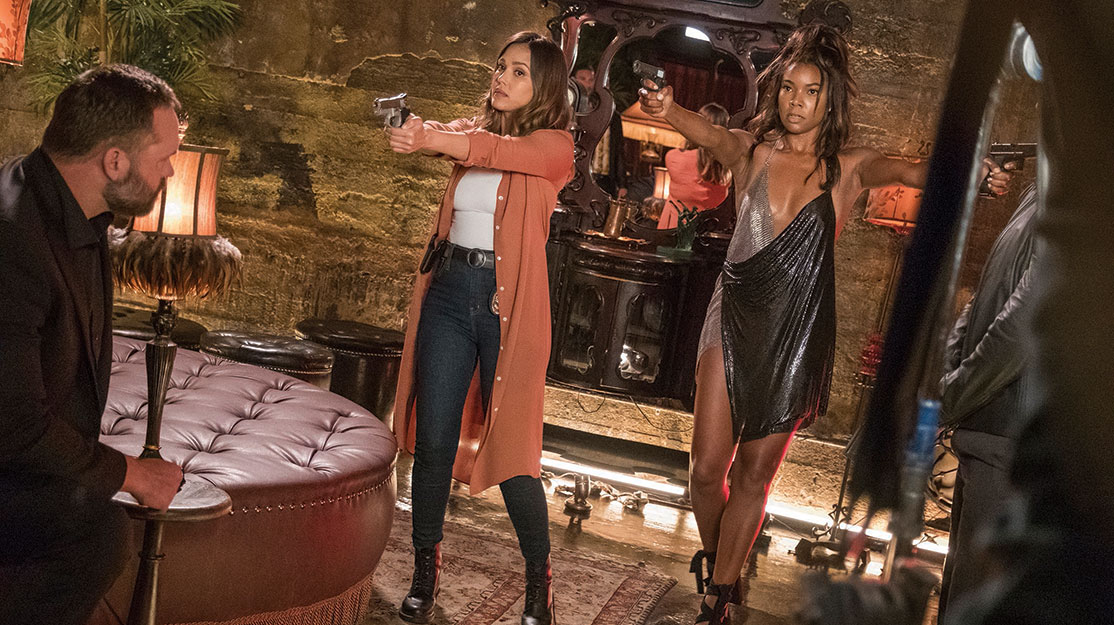 Sharing the screen together in action crime drama LA’s Finest, stars Gabrielle Union and Jessica Alba reveal the origins of the Bad Boys spin-off, their involvement in the creative process and why the show aims to showcase the titular city.

In the 16 years since Bad Boys II first hit cinemas, Gabrielle Union has gone on to become one of the biggest US actors and producers on screen. Roles in Friends, City of Angels, Ugly Betty, Flash Forward and Night Stalker cemented her screen presence, which had begun in the 1990s with roles in shows such as Moesha and Saved By The Bell: The New Class.

She is best known for playing a talkshow host in BET’s long-running series Being Mary Jane, which debuted in 2013 and concluded this year, while also starring in a host of feature films. Meanwhile, Union has also stepped into production, shepherding TV movie With This Ring and features Almost Christmas and 2018’s Breaking In, in which she also stars as a woman who fights to protect her family during a home invasion.

Yet it is the character of Syd Burnett, last seen alongside Detective Marcus Burnett (Martin Lawrence) and Detective Mike Lowery (Will Smith) in Bad Boys II, that inspired her latest television series, action-crime drama LA’s Finest.

Produced for US streaming platform Spectrum, the Bad Boys spin-off sees Union reprise her role of Syd, who leaves her complicated past behind to become an LAPD detective. Now partnered with Nancy McKenna (Jessica Alba), they take on the most dangerous criminals in the city while skirting the rules and confronting their equally complex personal lives. After debuting earlier this year, the series has been renewed for a second season. It is produced by Jerry Bruckheimer Television and 2.0 Entertainment in association with Sony Pictures Television.

Union and Alba (Sin City, Fantastic Four) both attended the Monte Carlo TV Festival, where LA’s Finest had its premiere screening, and DQ later heard from the stars how they teamed up on the series, their roles behind the scenes as executive producers and their love for the show’s location.

LA’s Finest was based on Union’s desire to find out what happens to Syd after Bad Boys II.
Gabrielle Union: I was in this very iconic movie that was globally loved and all the time I get, ‘Oh my God, you’re Bad Girl or whatever!’ But I was thinking, ‘You have no idea what happens to my character except she has this high-powered job as a DEA agent, she goes undercover and then gets in over her head and her brother and her lover have to save her.’ I was like, ‘Screw that, I’m sure Syd is very capable. Let’s create a show where Syd gets to be capable and save her damn self.’”

Like the Bad Boys universe, her ambition was to create a whole new world full of mythology. She just needed a co-star and found one in Alba.
Union: I wanted to partner up with somebody who has an equally large life and an equally large platform and a woman of colour and who is an OG in the action space – she’s Dark Angel, dude! She’s a James Cameron kick-ass chick! If we can come together, we are so much stronger and I think people might want to see us.

Union’s experience producing was also proof that audiences want to see female-led stories.
Union: I did a movie last year called Breaking In. We literally shot it for a bag of Doritos. We did this one location on no money. The last I checked we were 12x budget [in revenue]. Just because you’re giving me a smaller budget and less screens, I’m still kicking ass, so if we actually give women a platform with a budget and empower them, holy shit, people are going to come, so let’s do it! Jerry Bruckheimer was like, ‘You are on to something.’ There was no way in hell I wasn’t going to make that show. It’s not only the right thing to do, creating a piece of art in the action genre that has been underserved, but we have the opportunity to empower not just us but so many people in front of and behind the camera. Don’t let me in the room and give me a seat at the table because I’m holding that door wide open and I’m letting in as many people as possible, and then I hope those people hold the door open and bring in more people. So we’re just trying to be the change we want to see and create the shows we want to binge.

As well as fronting the series, Alba and Union have been involved extensively behind the scenes alongside creators Brandon Margolis (The Blacklist) and Brandon Sonnier (The Blacklist).
Jessica Alba: We are always sitting with the guys who created the show and we all sit down and agree on the storylines, the characters and how you’ll see their storylines go throughout the season. We do a notes round on the scripts, usually during a lunchtime, two episodes before we shoot it. Then the day of, every time before we start our day, Gab and I will sit with whoever is the producing writer of that episode, the director and our other co-creators and we go through the day. We tweak things with them. We’re very involved.

Union: I think earlier in our career, and generally speaking in Hollywood, we like talent to just be talent, like, ‘Shut up and just be pretty!’ We feel like not having talent as a part of the full creative process does a disservice to the process. The more seats at the table and the more eyeballs on a product, the quicker you catch bogeys and the quicker you are able to identify maybe some problematic areas. You have more voices on something to fix things, to shape things, in a way that’s going to be the most enjoyable for the audience. Sometimes when you create art in a vacuum, there are so many blindspots that you see episodes air and you see social media explode and you think, ‘How did you miss that?’ That’s because you’re alone in this process. But sometimes you’re not the best person to point out your own mistakes.

Alba’s character, Nancy, is a stepmother, which provided the actor with a new relationship dynamic to dig into during the series.
Alba: You just haven’t really seen it before. The way you’ve typically seen that relationship is either it’s very competitive or really extra and weird, like the step-mum says, ‘I’m your mother now.’ I was really sensitive to it. Gab created it and was really inspired by her own life as a stepmother to kids and her navigating that relationship dynamic. It was actually really fun thing to play.

The explosion of streaming platforms like Charter Communications-owned Spectrum is providing actors with more opportunities to show what they can do on screen.
Union: There’s so much more demand for content that needs to be filled, which means there’s so many more opportunities for amazing actors who have been toiling away all over the world to have a chance to show what the hell they can do. It’s just more opportunity to enjoy content as a family or see actors that would never be called ‘stars’ in the previous system because they’re just able, but not a double-O or the previous generation’s idea of what a star was. But it’s great to actually see capable, dope, amazing talented artists on a global level. It’s amazing.

But at the heart of LA’s Finest is the city itself, to which both stars have a strong affinity.
Union: I love that you can get from the mountains, you can ski and get to the beach within two hours. I love the diversity that exists throughout LA County and the surrounding communities and that’s what we want to show. We wanted to bring tax dollars, opportunities and jobs to underserved communities in LA, which is why our sound stages are in Pacoima. It’s not a city most people recognise with filmmaking but it’s a rich, amazing, dope city with amazing, capable individuals. We wanted to spread the wealth.

Alba: I grew up in the suburbs of LA and I’ve been acting since I was 12 so I’ve been coming to LA my whole life; I live there and my family is there, so it’s home. What makes LA so cool is we have generations of minority communities that grew up in LA and have melded together, so you have a really interesting Mexican-Korean community where they both influence each other’s cultures. We have a really cool Japanese community that also has influence with the Latino community. There’s a huge South-East Asian community. It’s a really rich city and we really wanted LA to be a character as we are in the show. So as the series goes on you unfold and unpack all these really cool, interesting textures inside LA.