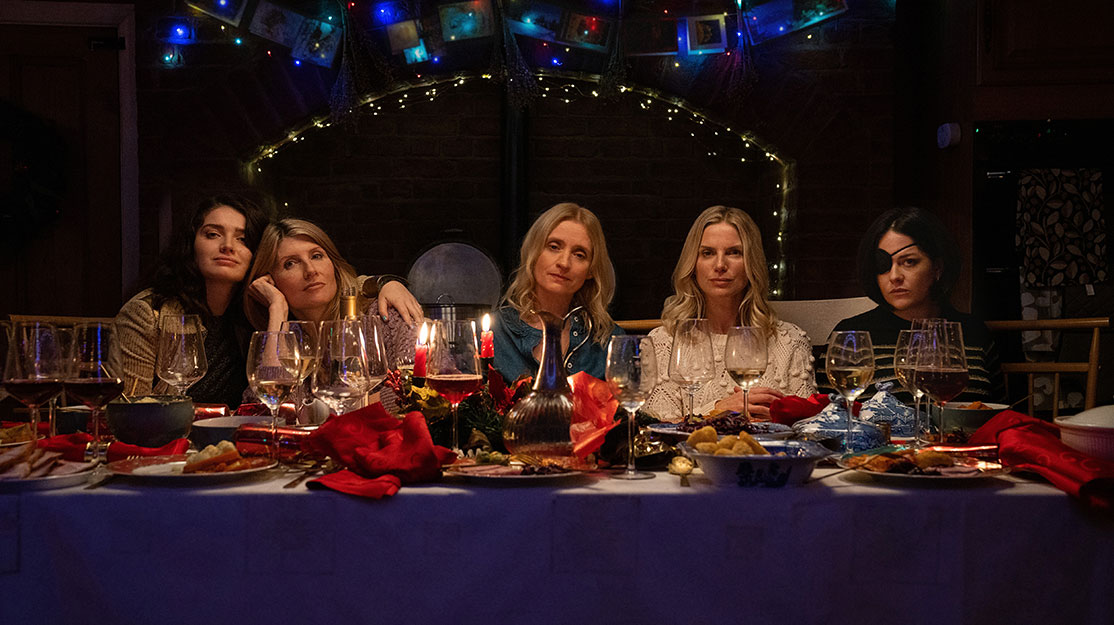 On the southern tip of Dublin Bay, locals and tourists swim side by side at the Irish capital’s iconic open-water venue Forty Foot. Visitors over the past year might also have found themselves taking a dip in the Irish Sea alongside actors such as Sharon Horgan, Anne-Marie Duff, Eve Hewson, Sarah Greene and Eva Birthistle, who were there filming scenes for Apple TV+’s dark comedic thriller Bad Sisters.

The location plays a key role in this story of five sisters who have always looked out for each other following the deaths of their parents. When one of their husbands is found dead, his life insurers launch an investigation to prove malicious intent – and each sister has plenty of reasons for wanting him dead.

When DQ speaks to lead director and executive producer Dearbhla Walsh, she has recently visited the Forty Foot for a swim herself – this time without the pressure of directing a cast and crew in this very public location.

“It isn’t Malibu, and the Americans [working on the show] were thinking, ‘What’s the big deal?’” she says. “But it’s very famous in Irish folklore and there’s a Christmas Day tradition of swimming there. Two years ago, Sharon and her sisters went and she had never been before. She was blown away by the whole culture, fun and madness of it – and it started as her way into telling this story. I was feeling very possessive of the Forty Foot and that we get to show it off.”

The first Apple TV+ series under Horgan’s first-look pact with the streamer, and produced by her prodco Merman along with ABC Signature, the 10-episode show opens with Grace (Duff) grieving over the coffin of her dead husband John Paul (Claes Bang). But it soon becomes clear she’s the only one among this tight-knit group of sisters – which also includes Eva (Horgan), Ursula (Birthistle), Bibi (Greene) and Becka (Hewson) – who will mourn his death.

Through flashbacks, with a smart, film reel-style transition used to bounce between the past and present, JP is revealed to be less an unfunny, tasteless brother-in-law and more an abusive, controlling monster. When he stops Grace from joining her sisters for a traditional Christmas Day swim at the Forty Foot, they quickly imagine inventive ways he might meet his maker. But how did he end up dead and who is responsible?

From starting her career on Irish-language series before a stint on British soap EastEnders and helming multiple episodes of comedy drama Shameless, Walsh has built an enviable list of credits on both sides of the Atlantic, from Little Dorrit, The Tudors and Borgia to Penny Dreadful, The Handmaid’s Tale and Fargo.

The opportunity to return home to Ireland to film Bad Sisters was a big factor in Walsh joining the project, as was the chance to team up with Horgan. “I love her and her writing and her humour – and as an Irish person, you just get it,” the director says. “We were almost like sisters in that there was a shorthand in our sardonic humour and not having to explain things and references. That was so much fun because you spend so much time, as the director, making yourself clear and making yourself understood. So it was really great fun when you could just do that with a pause or a nod or a word.”

Walsh had previously worked with Horgan on the actor and writer’s horror comedy Shining Vale, which starred Courtney Cox and debuted on US premium cable network Starz earlier this year. Walsh directed the pilot, though Horgan didn’t make it out to the shoot in LA because of the Covid pandemic. Bad Sisters then allowed them to work together more closely, and gave Walsh the chance to make an Ireland-set series for an international streaming platform.

The pair spoke about the show early on in its development, before Horgan set up a writers room and before it had been cast. Walsh also watched the original series and offered her thoughts on what worked and what didn’t.

“But our big conversation was what the tone of the piece should be and who JP was and how to portray that role, because he’s such a dark character. We had to work out how to make him palatable but still want to kill him and still understand people’s motives for killing him,” she says. “Then I went off and Sharon was in the writers room. They did a lot of great work, and then I came on board when it was officially happening at the beginning of last year.”

Although the series is inspired by Clan, Walsh says she made sure not to watch the Flemish-language drama again after that initial viewing for fear of it influencing her decision-making. She describes the JP character in the original as softer and more comedic than he is in Bad Sisters.

“I wanted him to start just like your uncle at Christmas who you just want to fucking kill. I wanted him to seem completely ordinary and normal and then reveal what he’s really like,” she says. “When I read the script the first time, my blood ran cold when he stopped Grace going out to join her sisters. That was the first time I thought, ‘This man is actually a monster. He’s not just annoying.’ I wanted to make sure that, up to then, he was just annoying, and then at that moment, I wanted it to be dark and frightening. The original series never went down that route.”

JP aside, lead director Walsh was faced with the daunting task of featuring a vast ensemble of characters on screen without landing in “coverage city” by bouncing between shots of individual characters.

“If you get into covering each sister, it starts to feel very conventional and more sitcom, so I made strong decisions about framing characters and allowing the camera to watch the family and how they operate as a group and connect with each other, so you can watch them instead of cutting all of the time.”

By opening the series with a funeral and a wake, there was also just enough time to introduce the main figures in the drama in a way that would tantalise viewers enough to make them want to continue watching, before Walsh, Horgan et al begin to peel back the layers over the course of the series.

“In every family, there is the blonde, the one that went to England, the father’s favourite and the wild one, which we use to broadly introduce them and then we actually dig down into who they are,” the director says. “I just loved them all. The key thing for me about the story from the beginning was the relationship of the five sisters. I just love family dysfunction, and the family that slays together stays together. It was a real achievement in the writing as well, and in the acting. Personally, I don’t think there’s a bum note [in the cast].”

Two scenes from the shoot caused particular concern for Walsh ahead of production. The first was a big scene at the Forty Foot, which is a public space and thus couldn’t be closed for filming.

“But actually that was so much fun because it was so wild and we were in and out of the water. I was directing in a swimsuit,” she says. “The other scene was Christmas Day. Every director hates a dinner-party situation because it is hard work with all the coverage. But we had so much fun because the girls all just loved each other.

“Everybody liked each other so much that, between takes, when I would be setting up, they wouldn’t go back to their dressing room, they would be chatting away and then it was like, ‘OK, we need quiet now.’ It was hilarious. Everyone really liked each other and enjoyed each other and were constantly sharing stories. Sarah Greene had just had her baby and it was really fascinating to work with an ensemble who were so bonded.”

Walsh’s preparation for any shoot includes meetings with each actor to talk through their character and key scenes, as well as sharing thoughts from her own pitch document and tone document and highlighting particular references to give them a better understanding of the look and feel she wants from the series.

“Then once we hit set, everybody knows what they’re doing,” she says. “And they’re brilliant actors. Every scene with them was so much fun. As the series goes on, there’s more and more of the sisters all together. I only had a handful of scenes where they were all together, so it grows through the series. I had a lot of two-hander scenes with Sharon and Sarah.”

As an executive producer, Walsh also felt a responsibility for the whole project, and was particularly attentive to the level of Irish cultural detail featured on screen. Bad Sisters isn’t a tourist ad for Dublin, but Walsh was minded to blend contemporary elements of the city with some of its most famous landmarks, as well as using nearby locations in Howth and Malahide.

Another big challenge was giving viewers permission to laugh. “We wanted to be sophisticated with the drama. We didn’t play anything for laughs. If anything, that was the challenge of the piece, because a lot of people might expect it to be a laugh a minute, and it’s not that.

“I adored Catastrophe and I loved how dark that was, how dysfunctional it was and how much I loved those characters, whereas Motherland is actually laugh-out-loud funny – the performances are very heightened in that and you really enjoy it for that,” says Walsh, comparing Bad Sisters to two of Horgan’s comedy hits.

Though she helmed the first three episodes before handing over to fellow directors Josephine Bournebusch and Rebecca Gatward, Walsh believes “each episode is better than the last, because as they go into the past, you’re learning more and more about each character,” she says. “So you fall more in love with each character and you see more of the story from different angles. Just by the nature of it, you’re digging deeper each week.”

Working on the series was a “brilliant” experience, and Casarotto-repped Walsh now hopes viewers will enjoy watching Bad Sisters as much as she enjoyed making it. “It’s interesting for Apple TV+ in that it’s got an international aspiration but it feels very local in terms of Sharon’s writing and the location of it. And I’m hoping the heart of the piece shines through the darkness of it all.”