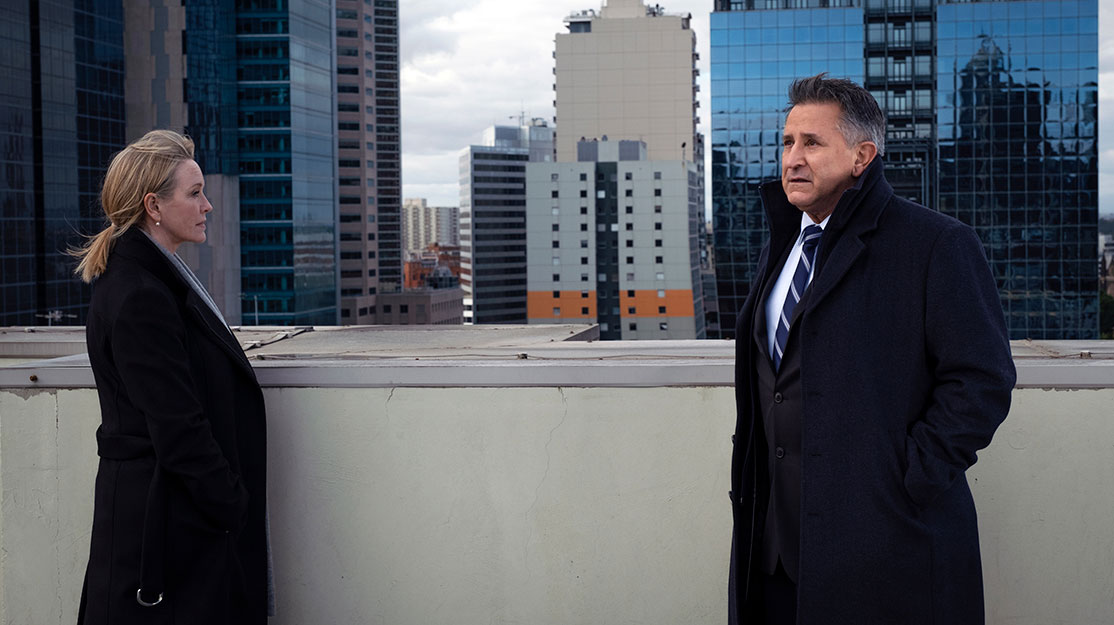 Back with a vengeance

If it had been up to Australian broadcaster Network Nine, forensic psychiatrist Jane Halifax might never have disappeared from television. The lead character in Halifax FP, she was portrayed by Rebecca Gibney in 21 telemovies between 1994 and 2002.

But it was at that point that the show’s creator, Roger Simpson, decided to pull the plug on the franchise. He went on to produce series such as police drama Stingers and Satisfaction, which starred Jacqui Weaver and Liam Hemsworth.

However, almost two decades after Halifax FP last aired, the series has now been resurrected, with Gibney returning to the titular role in Halifax: Retribution. Like the TV industry itself in the intervening years, the series has evolved, with the reboot telling one serialised story across eight episodes rather than returning to the original telemovie format.

“It’s kind of the stupid thing you only do when you’re young,” Simpson says of turning down Nine’s offer to produce more episodes of the original series. “I wouldn’t do it now, but it was the arrogance of youth and we thought, ‘Let’s try something new.’ We went on and made other things. But now we have a second chance to do it again, so it all worked out.

“But streaming has completely changed the nature of television. There’s no slot for a telemovie, so we really had to reconfigure it in terms of the format that’s now current, which is the six-, eight- or 10-part serial.”

Jane is the only survivor from the original series, although as Simpson points out, she was the only regular character in each of the telemovies anyway. “Each episode was completely different and each setting was completely different apart from Jane,” he says. “She didn’t even have the same assistants in the office. We used different directors, different writers, different composers and designers – and by doing that, we attracted the best of Australian actors and practitioners, so it was really quite a successful format we came up with, more by accident than anything else.”

Set once again in Melbourne, Halifax: Retribution finds a sniper terrorising the city, with Jane approached by Inspector Tom Saracen (Anthony LaPaglia) to leave her university teaching position and help find the killer, 20 years after she last worked with the police. In a long-term relationship with Ben (Craig Hall) and a stepmother to Zoe (Mavournee Hazel), Jane is initially thrilled at the prospect of returning to the field. But when someone close to her is murdered, she must confront the possibility that the killing is related to the shooter and also linked to secrets from her past.

When DQ speaks to Gibney and Simpson, they are approaching the halfway point of filming the series. Four directors are each overseeing two episodes of the Beyond Lonehand Production show, which is distributed by Beyond Distribution. Six writers, including showrunner Simpson, were involved in penning the scripts, based on an initial storyline Simpson conceived. Though he would usually prefer to write a series by himself, the length of Halifax: Retribution demanded a “high-concept crime,” while the speed of production meant Simpson needed to open a writers room to accelerate the writing process.

The expanded storyline also means viewers will learn more about Jane’s private life, with the original telemovies rarely touching on her non-work relationships. Part of Jane’s backstory is the revelation that she left police work after succumbing to the pressures of the job, going into teaching instead. Halifax: Retribution reintroduces her as a professor of forensic psychiatry at Melbourne University, quite happily ensconced in her new role until a new case draws her back into a life she realises she misses.

“In the old days, we could have no continuing story at all because the network reserved the right to show [the films] in whatever order the programmers decided,” Simpson says. “They wanted total flexibility. That precluded us from any serial elements or going into her private life.

“Twenty years ago, when she was in her early 30s, she was someone who couldn’t keep a relationship. That had to be the nature of the telemovie. She would have a different relationship, if she had one, for each film. Now that she’s 20 years older, we could give her a family, a history and a backstory. It was really interesting to explore who Jane Halifax is today.”

Halifax FP originated off the back of Australian period drama Snowy, on which Simpson was a writer and Gibney part of the ensemble cast. When it ended after a single 13-episode season, Simpson designed a new vehicle for the actor, writing the pilot of Halifax FP with her in mind.

“The usual thing is to write the pilot and then cast it. But this time we actually cast it first and wrote it for her,” he recalls. “We haven’t done that too often over the years. So that was unique. It’s been a long friendship so it’s been great to come back and work together again after all that time.

“She’s just utterly convincing in the role. It’s like she’s a born sleuth and, in Australian terms, she’s one of our leading actors down here, so the combination is pretty good.”

For New Zealander Gibney, returning to the role of Jane Halifax was like putting on an old pair of slippers, or in this case, one of Jane’s trademark designer jackets. When asked by Nine if there was a show she would like to bring back, she immediately said Halifax. And when the network said they would be interested in a reboot, she called Simpson.

“It was just one of those things that took on a life of its own really,” she explains. “I love the fact that when we first came up with Jane Halifax, I was about 28 or 29, and even back then with the research that I was doing, I thought, ‘I don’t know if that’s a true depiction of a real forensic psychiatrist.’ The reality is they’re older than that, so now I’m actually a woman in my early 50s, I feel like I can bring a lot more to the character.”

Gibney describes Jane as “ahead of her time,” being the first female forensic psychiatrist on screen in a world dominated by men. “She was alone, she was flawed. She had a lot of emotional issues. We hadn’t really seen a lot of that,” says the actor, citing Prime Suspect star Helen Mirren as her hero. “We’ve now got [other series like] The Fall, The Killing, The Bridge and Marcella, so there are a lot of strong female characters out there. But back then, Jane was one of a few.”

Revisiting Jane, what Gibney has enjoyed most is learning that the character has a family. But just as she is enjoying domestic life, she is drawn back into criminal profiling. It’s not just the sniper who is in her sights, however, but also La Paglia’s Tom, with whom she clashes from the outset.

“He doesn’t hold a lot of play with forensic psychiatry but he’s at a loss at how to find this person, so he needs her,” Gibney says. “Over the course of the series, we uncover their relationship and find out he has his own demons and his own secrets and they form an unlikely friendship. I’ve known Anthony for 25 years – we first played fiancés in [1994 romantic comedy] Lucky Break and then husband and wife in the [2012] PJ Hogan film Mental. Now we’ve come back together again. Our chemistry is great; we’re good friends and we carry that on screen with us.”

Gibney’s role in Halifax: Retribution isn’t limited to the lead character, however, as she is also an executive producer, following similar dual roles on series such as miniseries Winter and Wanted, which she created with husband Richard Bell. As such, she has been across the dailies and looking at the rushes and various episode edits, as well as having input into the story.

“I’m probably bossy,” she jokes. “Roger’s getting used to the robust discussions we have. We don’t always agree on how things should be, and that’s been interesting. Twenty years ago, I was quite content to play Jane Halifax, but now, because I’ve been producing my own shows, I’m probably a little more vocal and he’s getting used to it! He’s also a dear friend. It’s a great collaboration. It’s been great to be back.”

Watching early cuts of the series has allowed Gibney to be objective about her own performance and take a view of the overall production. She admits that, more often than not, “I just think [I’m] crap,” but says she has learned to watch herself unemotionally.

“Particularly now I’m in my 50s and looking at my face ageing on screen, I’m kind of OK with it,” she says. “Weirdly enough, I would have struggled with it a lot more in my 30s than I do now. I’m a lot more accepting about who I am as a performer and as a producer in general. I don’t really care as much about the physicality of how I come across, which allows me the freedom to probably be a better actor because I’m OK with who I am. I don’t want to stop the clock, I just want to slow it down! I have no interest trying to look like I’m in my 30s or 40s. I want to portray a woman of my age.

“Sometimes as a producer I have to let performances go through that I don’t like because the other actor or the shot works better. Sometimes it’s frustrating but, generally, I’m OK with that. While I’m very passionate about what I do, it’s not who I am. We are making entertainment. As a mother of a 15-year-old, that’s way more important to me.”

Providing Halifax: Retribution is a hit, Gibney is hopeful the character could return for a new story next year. Similarly, having let the original show slip away, Simpson is not about to make the same mistake twice, revealing that he’s “learned to love Jane Halifax all over again.”

He adds: “The mature Jane Halifax is probably a more interesting character than the one in her early 30s who was just starting out in this world of crime. Now she’s wiser and smarter. It’s been really enjoyable to come back to her.”