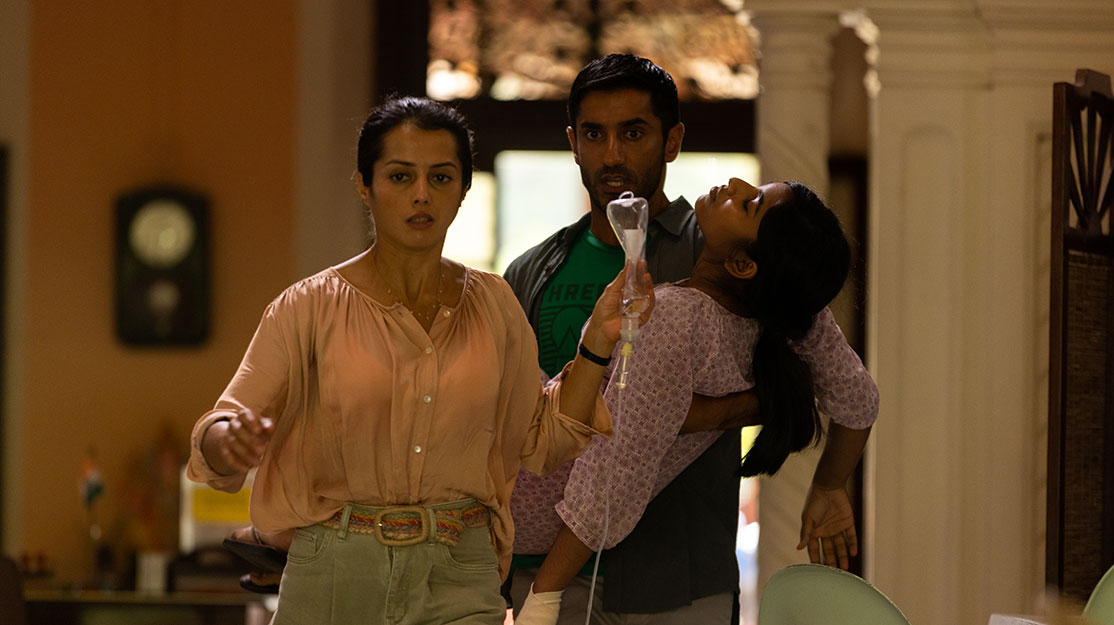 Back on the wards

Executive producer Lucy Bedford and writer Dan Sefton tell DQ how they overcame the Covid-19 pandemic to complete filming on the fourth season of The Good Karma Hospital in Sri Lanka.

During the dark winter months, ITV medical drama The Good Karma Hospital has become a reliable tonic of sunshine, sandy beaches and luscious landscapes since it first debuted in 2017. Yet like numerous other series gearing up for production at the start of 2020, the return of the show for its fourth season was delayed by the Covid-19 pandemic.

Executive producer Lucy Bedford says working on season four has been “been an extraordinary journey” since it was greenlit by ITV “a long, long time ago.” Shooting began exactly 12 months after it was originally set to take place, as the production had to contend not only with working through the pandemic but also the fact the series is filmed in Sri Lanka, a country that completely closed its borders in order to keep Covid at bay. Then when Sri Lanka did reopen, the UK quickly put the island on its restrictive red travel list.

“It required quite a lot of flexibility and a good deal of tenacity and positivity about our ability to go and shoot out there,” says Bedford, head of drama at producer Tiger Aspect Productions. “The thing that got us through was we have such a brilliant, well-established relationship with our Sri Lankan service company that we were able to trust them to let us know when was the appropriate moment [to begin filming]. The real challenge we had was making a call and committing to production dates without full certainty that we would be able to get access to the country and shoot there.”

Each season of The Good Karma Hospital has been shot in Sri Lanka from August to October. But in August 2020, when the pandemic was still in its relative infancy, it proved impossible to keep that schedule in place. Dates were pushed back to January and then March 2021, before filming finally could begin last August, serendipitously falling in line with the show’s usual shooting schedule.

The show’s writers room, led by creator Dan Sefton (Trust Me), had already moved online when the UK went into its first lockdown in March 2020, though there was still belief shooting would take place that summer.

“But of course, the implications were much more profound than that,” Bedford says. “What it meant was there were productions [for Tiger Aspect] already shooting that we had to shut down, but for Good Karma it meant development moved into a virtual space rather than an in-person space, which we’ve now all got very accustomed to. There are some advantages to that and there are some disadvantages as well.”

The benefits included being able to speak to people from all over the world and bring them together online, though the exec says those conversations can lack the spontaneity of an in-person meeting.

One episode had been written before the UK went into lockdown, and while Sefton didn’t know how long the pandemic would last, he could be sure series launches would be pushed back as productions went on hiatus. From a creative perspective, his biggest challenge then became overcoming the time jump that emerged between the end of season three – which ended on a cliffhanger for lead character Ruby (Acharia) as love interest Dr Gabriel Varma (James Floyd) departed – and the start of season four.

“There was absolutely no way of building in a two-year gap. That was quite a headache really,” he says. “When something massive happens in the real world and it affects everybody globally, it’s really hard not to reference it, but quite often it doesn’t work on the screen. We came up with a way around that, which just means viewers have to suspend their disbelief for us. I think with a show like Good Karma, that’s possible. But I have heard about lots of other shows that were completely scuppered by Covid. It just didn’t work.”

Notably, the first episode of season four, which aired on ITV on January 23, concerned a virus outbreak in a local village and the hospital’s efforts to support those affected while also containing the spread. Coincidentally, Sefton had that storyline in mind before fiction collided with the real world, but the story-of-the-week structure of the series meant that by episode two, The Good Karma Hospital had moved on.

“It’s a way of saying to the viewers that we acknowledge something big is happening that also happened to our characters but now we move on with the show in the post-Covid world, which hopefully will work,” he says.

Meanwhile, one of the big stories this season concerns Morrissey’s beach bar owner Greg, who finds himself in hot water over his immigration status – a story arc inspired by the UK’s own Windrush Scandal, when people who had lived in the country for several decades were told to return to countries many of them had never known.

“It is just nuts,” Sefton says of the political scandal. “I thought, we all love Neil Morrissey’s character. He’s been in India forever. What happens if somebody turns round and says you’re not supposed to be here, go home? I thought it was interesting to see it from the other point of view, so a white bloke in India is being told to go home, a place he’s not lived in for 20 years but it doesn’t matter. That’s what’s happening to a lot of people in this country [the UK] or has happened. But we don’t make a big thing about it; it’s just there and people can join the dots themselves.”

But while the relationships between characters evolve across the series, its blend of drama and comedy remain. Sefton says it has been difficult finding that balance over the years as characters jump from heartbreaking emotional scenes to comedic situations.

“The long-term difficulty writing the show is to just keep doing the same thing without repeating yourself, so it is very difficult,” he says. “That’s why you need new characters and new situations to freshen that up, otherwise it does become repetitive and people start to realise characters are doing the same thing all the time and don’t seem to be learning at all. Then they don’t feel real.”

Perhaps the biggest advantage The Good Karma Hospital had during the pandemic was the fact the production was already very well established, which meant the crew could spring into action as soon as Sri Lanka opened its borders. Banijay Rights distributes the series internationally.

“If we were a new show, it would have taken us months and months to get there, to get our feet on the ground, to work out how to get the show up,” Bedford says. “Because we were well established there and our hero location is really well known to us, we were able to move into production really efficiently. And then, because we’ve made the show for a number of years now, you’re able to nail down those scripts and prep the show simultaneously. That helps.”

Shooting in Sri Lanka also gives the series a unique quality that cannot be replicated anywhere else. “It’s genuinely the magic ingredient on the show. It’s like the secret sauce, but it’s not very secret – it’s all over the screen,” Bedford says. “Taking the cast out there and members of crew from the UK or elsewhere, almost every single one of them comes back feeling quite transformed from the experience of being there.

“The negatives are it’s a very long way away. People do have to travel away from home for quite a long time, and that puts pressure on people at different points in different ways. But the downsides are minuscule in comparison to the upsides. We couldn’t be happier working out there.”

Because of the pandemic, more local actors from Sri Lanka were hired when Indian actors weren’t able to travel, while actors who did fly out had to stay until they had wrapped their scenes and were ready to head home, rather than coming in and out depending on their filming schedule.

Sri Lanka was also in full lockdown during production, so while filming was able to go ahead, bars and restaurants were closed and the cast and crew were confined to separate hotels.

“The cast in particular created this sense of an extended family in this one hotel, which they had exclusive use of. They formed an incredibly tight unit and looked after each other with real tenderness,” Bedford says. “Many of them had partners with them for the duration of the shoot, and they came to cooperate like one big happy family. They did quiz nights and movie nights and they ate all their meals together. They looked out for each other.”

Most importantly, there will be no sense of the real-world challenges facing the production when viewers tune into see the show, which is as vibrant as ever. “The team did an amazing job on that, because there were very stringent limitations in place and there were lots of things we usually do that we weren’t able to do,” Bedford says.

“But actually, everyone in the industry has learned to be quite resourceful about how we achieve these things. I don’t think the audience would notice any difference. That kind of colour, joyfulness, vibrancy and busyness is a huge part of the show, and we really wanted to be able to deliver that for the audience.”

For Sefton, the pandemic hasn’t just meant changing television schedules but a return to hospital wards for the A&E doctor-turned-writer, who went back to work at his local hospital in April 2020.

“I felt I had to volunteer,” he says. “I started going back once or twice a week and have been doing that ever since. It’s only just calming down now because A&E was actually very quiet during the first part of the pandemic, but since then it’s been very busy because so many people have been away from healthcare. It was good to have a focus and something to do rather than sitting at home, so it was an unexpected return to a previous life.”