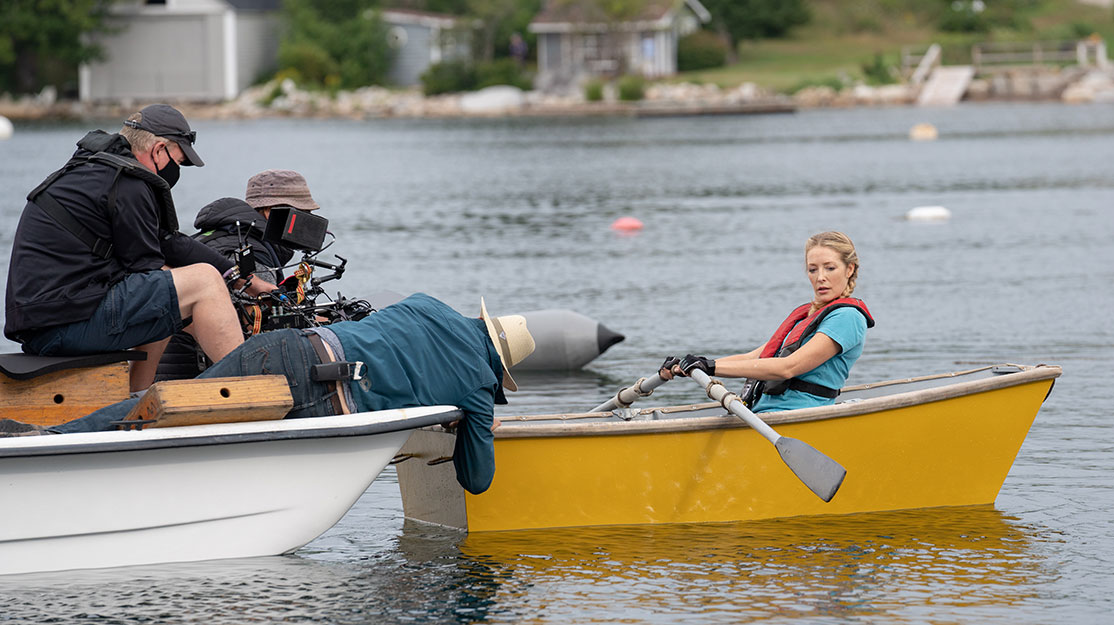 As drama production slowly ramps up after coronavirus-enforced shutdowns around the world, DQ hears how showrunners, directors and even composers are rising to the challenges presented by the pandemic.

When Covid-19 shut down television productions around the world earlier this year, it wasn’t a question of if but when and how they would resume with all the health and safety precautions required to keep cast and crew safe amid a global pandemic.

One of the most eagerly anticipated series of the year is the fourth season of FX anthology crime drama Fargo, but its launch was delayed from April to September as filming was put on hold, with shooting on the final two episodes only wrapping a fortnight before the show’s premiere.

Produced by MGM Television and FX Productions and distributed by MGM, the latest iteration of the series stars Chris Rock as the leader of an African American crime family going head-to-head with the Italian mafia in 1950s Kansas City.

But while the focus was on getting the production back up and running, showrunner Noah Hawley says he used the hiatus to spend more time with the material than he would normally have been able to.

“Just from a creative standpoint, it was nice to have the extra time because you’re usually racing,” he says. “On season three, we were airing while we were filming. There’s no time to go, ‘Did I get this right?’ You just have to do your best and get it on air.

“I went back and watched the first two episodes one more time and I cut about five minutes out of each hour. I thought it needs to move faster and there were things I felt could be tightened or trimmed, so it was a lot clearer to me with the distance than it would have been.”

Restarting production, he says, was “fairly smooth,” although one of the downsides of losing six months of production time was that children grow up.

“We had at least one child actor who is very prominent in the story and I was like, ‘Send me a picture of him. Does he have a moustache now?’ Then, of course, especially with very in-demand actors, you end up competing with a lot of projects for them.

“Jessie Buckley [who plays nurse Oraetta Mayflower] has multiple offers to do movies that they’re trying to get going at the same time we’re trying to finish up. I want her to have every opportunity but somehow I’ve got to get my thing finished. You get into a lot of things like that, some logistical issues, not to mention the fact that when we sent our Italian actors home in March, we didn’t know when we could possibly get them back.

“We had pencilled in an August return, just hoping that we could be done by fall. And it ended up timing out pretty precisely to our guesstimate, which, I have to say, was very fortuitous.”

Fargo composer Jeff Russo admits to having an interesting time recording the soundtrack to the series. Usually he would have an orchestra of 40 or 50 players together in one room. This time, he had the same number of people playing individually, leaving him to bring them together digitally for the soundtrack.

“That’s been a lot more complicated,” he says. “But the writing of it hasn’t changed much. I sit in a room by myself and write, so I can do that in a pandemic or not. But the whole schedule has changed because you’re waiting for productions to restart or finish.

“We’re figuring out ways to make it work. I can be in a room with string players because they can all be wearing masks and the room is very big. They’re already doing that in Europe and some places here in the States. I don’t see that being much of a problem coming up soon.”

Currently filming in Nova Scotia on Canada’s eastern seaboard is CBC drama Feudal, described as an epic tale of lust, legacy and lobster. It is set against the backdrop of financial hardship, small-town intrigue and a long-buried secret that threatens a family-run summer resort as a group of siblings battle for control of its future.

Produced by Six Eleven Media and Entertainment One, which is also distributing, the project was forced to shut down in March, when showrunner Sheri Elwood was eight weeks into the writers’ room. Discussions continued over Zoom, which she admits were more “exhausting” than she anticipated, but the series did not change its creative tack as a result of the pandemic.

Based on her own family’s summer resort business and filmed within its extensive grounds, the show has proven to be remarkably “Covid-friendly” owing to the remote waterside location.

“We’re shooting on the beach, we’re shooting outside and we’re shooting in tents. It’s really Covid-friendly and that is just pure accident,” Elwood says. “All our actors came from all over the country and across the US, they quarantined for two weeks and now we’re a little bubble. It’s kind of a miracle.”

She admits pre-production was tighter than usual as insurance issues were ironed out, while the implications of a pandemic were still evolving. “It was a bit of a scramble, but we seem to have pulled it together,” she continues. “We’re testing a lot and all of our production facilities are sanitised within an inch of their lives. In terms of intimate scenes, we were in the fortunate position that I had already pinned Jonathan Silverman to play our lead actress Jennifer Finnigan’s soon-to-be-ex-husband, and he’s actually Jennifer’s real husband, so we were able to sort of sidestep that little ‘no kissing’ loophole.

“Before we started, I talked to the cast quite extensively about their comfort level. It all came down to everyone being safe and creating our own little internal social structure so we weren’t running around on weekends and potentially bringing Covid to set. We’ve really done everything we possibly can to keep everybody safe.”

German showrunner Christian Ditter is back on set for season two of his Netflix techno-thriller Biohackers, about a student who enters the world of illegal genetics and is linked to her star professor by a dark secret. A remote writers’ room was assembled to get the scripts into shape, while strict regulations were hammered out to ensure everyone involved in the production remained safe.

“Everybody gets tested once a week,” he explains. “Everybody has to wear masks at all times, except when they are in the office they share with two or three other people. Then, as soon as somebody enters from another department, they all have to wear masks.

“Then the only people allowed on set without masks are the actors. They get tested two times or three times a week, depending on what kind of scenes they will have and how close they are going to be to one another.”

The story also goes some way to looking after the health of the cast and crew. “When we started writing, we already knew we were in the middle of a pandemic so we avoided scenes with a lot of people,” Ditter says of the show, which is produced by Claussen+Putz Filmproduktion.

“We don’t have scenes in huge auditoriums like in season one, or huge party scenes. It’s a more intimate story, which I find interesting creatively also, but which also helps the production environment.”

Emily Mortimer also believes the additional layer of health and safety guidelines added to the process of making television drama can be a creative stimulant for those in front and behind the camera. Mortimer, best known for acting in films such as Mary Poppins Returns and TV series including The Newsroom, writes and directs BBC and Amazon coproduction The Pursuit of Love, based on Nancy Mitford’s novel of the same name.

Produced by Open Book and Moonage Pictures and distributed by BBC Studios, the romantic comedy-drama is set in Europe between the world wars and follows the adventures and misadventures of the charismatic and fearless Linda Radlett (Lily James) and her best friend and cousin Fanny Logan (Emily Beecham).

“I don’t have enough experience of directing to know whether it is being compromised [by Covid restrictions], but I do know enough about production, making things and writing things to know the restrictions are the thing that end up making you the most creative,” she says of the three-parter, which was her first directing job.

“When you’re told you can’t have everything you need or you think you need, you have to become a bit more inventive so that’s the case anyway. There’s never enough money for things or suddenly that location goes through or that actor can’t do it. You have to be ready at the last moment to change the plan and turn on a dime.

“In this industry, we are used to scraping around to make things work. We weren’t allowed to go into any big cities. We have had to find inventive ways of shooting all the locations in these big country houses and find ways of making them look like London and the French border with Spain. It’s been cool in a way but it’s just the same as it always is. It’s magic tricks.”

A side effect of the limited number of people on set at one time means Mortimer has the feeling of being on a closed set, with few distractions to take the focus away from the scene in hand.

“All the extra people who tend to congregate around, changing things at the last minute and doing hair and make-up checks, aren’t really allowed to be there, so in a way it’s less complicated than it normally is,” she notes. “Weirdly, there’s more time to just get on doing the takes and not having so much interference. I’ve also got such a good group of people, an amazing first AD, producers and DOP. I’ve just been incredibly lucky in it’s felt easy in a way that sometimes these things don’t feel. It’s been a nice vibe. Even when things go wrong, it doesn’t feel as traumatic as it could do.”

As if making TV drama were not complicated enough, Covid-19 has given the industry one more thing to think about. In a business where there is never enough time or money, it’s just another element that will set creativity flowing, with the results eagerly awaited by viewers around the world.