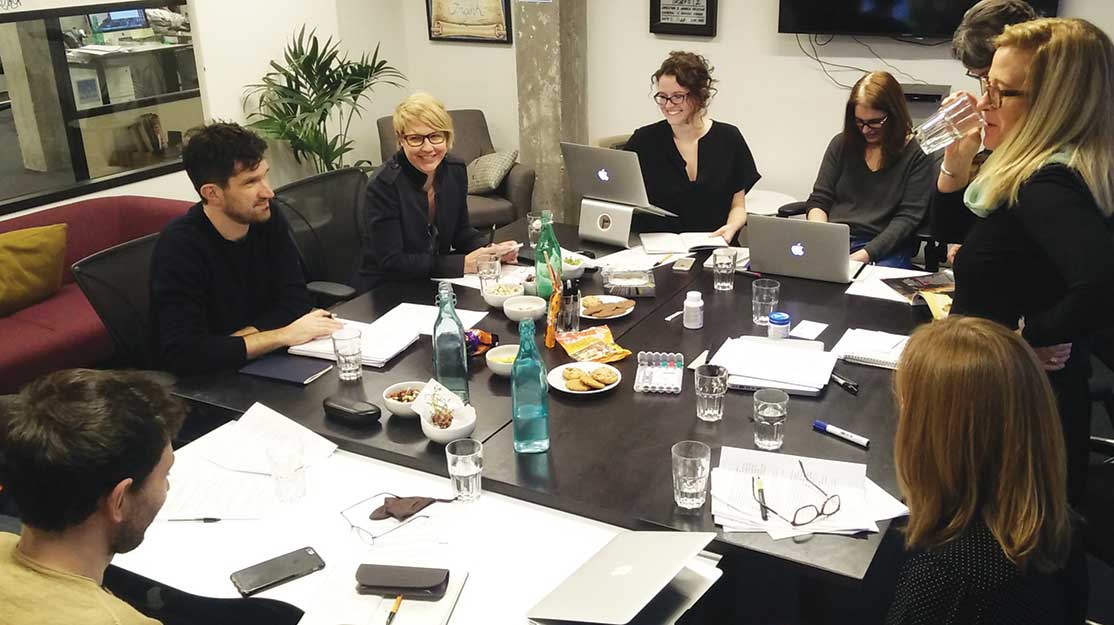 Back in the room

Imagine a writers room and you may well picture several people sitting around a big table, pens in hand and plenty of coffee within arm’s reach.

And on a visit to the offices of London-based Big Light Productions, DQ finds that isn’t far from the truth. In a fifth-floor room with a view across the city, three large desks have been pushed together and are covered with notepads and sheets of paper, laptops, pens, bottles of water and bowls filled with grapes, nuts and other treats.

Around the desks sit eight people – six writers and two script editors – who are in early development mapping out episodes for a potential second season of hostage drama Ransom. Created by David Vainola and Big Light CEO Frank Spotnitz, the series follows crisis and hostage negotiator Eric Beaumont (played by Luke Roberts), whose team is brought in to save lives when no one else can.

Season one debuted on CBS in the US and Canada’s Global TV on January 1 and will also air on Germany’s RTL and TF1 in France. All four networks coproduced the series, which is produced by Big Light, distributor Entertainment One, Sienna Films and Wildcat Productions.

Inside the writers room where work has been underway on season two since the beginning of the year, four cork boards are covered with notecards, each marked out with a different plot point or scene. Around the walls, there is memorabilia relating to previous Big Light series as well as shows Spotnitz has worked on himself. Posters from The X-Files, Hunted and The Man in the High Castle can be seen alongside a clapperboard from the set of Medici: Masters of Florence. Pictures of the Ransom cast are stuck to another wall.

As DQ pulls up a chair to sit in on the ongoing discussion, executive producer Spotnitz takes his place at the head of the table to listen to the latest episode outline. Whether leaning back with his arms folded or sitting forward to emphasise a point, the former X-Files showrunner wastes no time in offering notes as the episode is dissected, or leading discussions on character motivations and movements.

On several occasions he refers to movies to illustrate a point he is trying to make, and continually takes the writing team back to the beginning of the episode to iron out any wrinkles in the plotting.

Spotnitz has long championed writers rooms outside the US and describes the room at Big Light as a hybrid of UK and US production systems, using script editors to help guide the writing process in a way a showrunner might across the Atlantic. “I do think writers rooms are getting more traction outside the US,” he tells DQ later. “It won’t work for all shows. Really, you need eight or 10 episodes to even make it worthwhile. But with a certain number of shows, if they’re needed in a certain period of time, it’s just faster and I do think it’s better. The quality’s higher when you have all these people interrogating every beat of the story. They argue but it’s good because if you can survive that process, you have your whole story worked out and you go to the script process feeling really confident.”

Spotnitz jumps in and out of the room as his schedule permits – he’s also overseeing production of Canadian series The Indian Detective in South Africa and season two of aforementioned Italian historical drama Medici – leaving the other writers to get on with the task at hand in his absence.

“They’ve worked out a lot of it and then they tell me the story, and in a perfect world I’d say, ‘Great, go write it’ – but that rarely happens,” he admits. “Usually I go, ‘What about this and what about that?’ We talk about it, I’ll have read the story outlines that have been sent to broadcasters. There’s a lot of formal steps you have to go through because we have to please our studio and the broadcasters.

“But after season one, we know our show better and what worked well; we know our actors better and their strengths and chemistry. That’s one of the joys of doing television – you keep doing it, you don’t just do a movie and it’s over. We can learn and refine and do things we didn’t do before.”

In the room, it’s also clear that Spotnitz isn’t just thinking about the story. He might be imagining the budget total rocketing up when different settings are discussed for a particular scene, before suggesting the action be kept in a previous location.

“When I first started doing this, I remember thinking, ‘this sucks’ because we had to go back to an old location. But we’ve only got 10 days to shoot an episode and we can’t have 15 locations,” he says. “We’ve got to be practical. It forces you to simplify your storytelling and that’s actually really good. It’s hard to be simple but it’s better to be simple. So I’ve come to not resent it at all and to actually like it. The few times I’ve done episodes when I didn’t simplify things and I insisted we did all this production stuff, it hasn’t been better. There’s an economy to it that the audience responds to.”

The Ransom writers room is also notable for two of the scribes taking part – Bo Poraj and Susie Farrell – who were invited to join the team as the winners of a shadow writing scheme launched by Big Light and Creative Skillset, which works with the UK’s screen-based creative media industries to develop new talent.

Actor-turned-writer Poraj has worked on British soaps including EastEnders and Doctors, and the writers room experience offered a big step towards high-end drama that isn’t often available. “Getting your own stuff on screen is such a lottery,” he says. “Unless you get that break, it’s very hard. So hopefully a scheme like this is win-win because it gives us that development opportunity and also gives Big Light a potential talent pool to draw from in the future.”

Poraj admits the process isn’t perfect, with hours of discussion often leading to dead ends that serve no use to the final script. “There have been days where it felt like we didn’t make any progress at all,” he says, “but sometimes you feel like that and then at the end of the day, you touch on something that fixes the whole problem and you realise it was worth spending five hours meandering around the subject.”

And despite the downsides to using a writers room, including the increased cost of keeping several writers in place across many weeks, Poraj suggests its something the UK drama industry should do more often.

“I know it’s more expensive but when you think of production budgets, as a percentage of that budget, without a decent script, you’ve got nothing,” he says. “Even the best director and the best actors aren’t going to make it compelling viewing. It seems to be a fairly expedient policy to not invest more time in script development. I hope we will move more towards that model in the UK. Collaborating can be much more fun as well. You get an idea for a script and you get to run it past seven smart people – it can only make it better, can’t it?”

Over the last seven years, Big Light has brought around 60 writers through its doors, having established writers rooms on every show it produces. Spotnitz believes it’s a natural opportunity to train new writers.

“In the UK it’s very challenging. Broadcasters tend to buy drama from established writers – and if you’re not one of those established writers, it’s very hard to get your show commissioned,” he explains. “But drama is growing because of things like Netflix, Amazon and international coproductions. We need people who are trained to work collaboratively, who are comfortable sitting in that room batting around ideas and talking with other writers. Younger writers are really eager. They have watched American television and they’re not intimidated by it. They don’t feel like a writer must sit by themselves in a shed and write, they’re open to coming in and it’s fun. You laugh and make friends and go for drinks. It’s more fun than sitting by yourself with your computer.”

Kaye Elliott, programme lead for Creative Skillset’s High End TV (HETV) Council, adds: “The scheme provides a fantastic and unique opportunity for writers to learn about the process of working in a writing team for HETV. Creative Skillset is proud to support such an excellent initiative and encourages the development of more UK writers rooms to give writers more opportunities to further progress their skills and build their networks.”

Spotnitz concludes that ultimately, whatever the writing process used, there is no perfect story. “You get to the point where people say, ‘I enjoyed that,’ and that’s success,” he says. “There’s no true success, and perfection is not achievable. You’ll never get there. But that’s why this is an interesting job. You’ll never master this, you’ll never get bored because it’s impossible to say, ‘I’ve got this.’ Every story is so unique and different with different variables, it’s like a new puzzle to put together.”