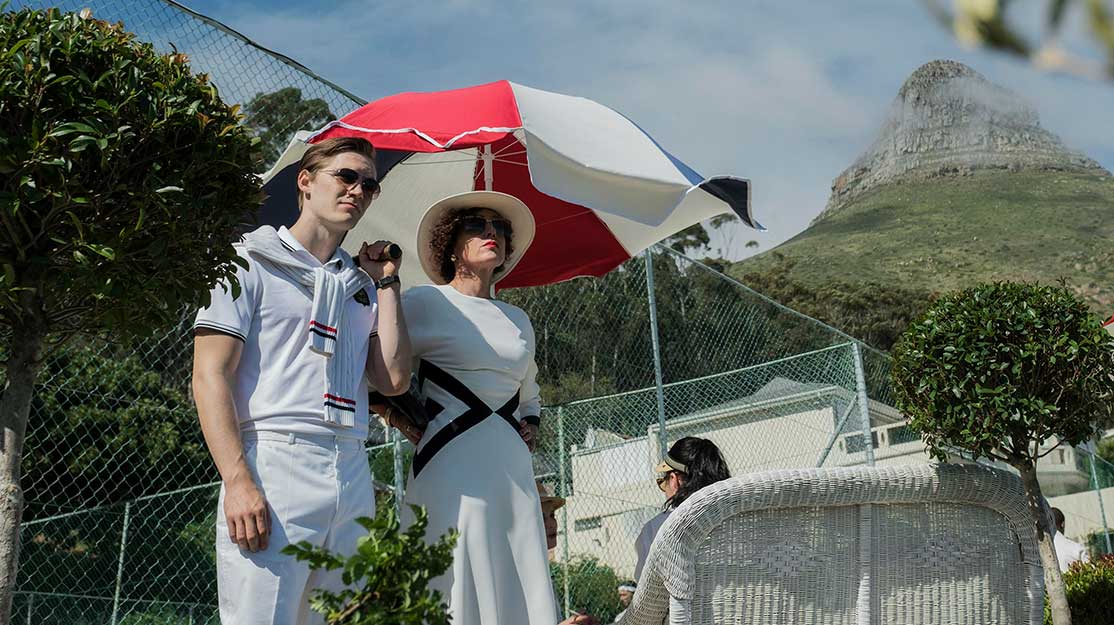 Back in the field

Three years after German breakout drama Deutschland 83 travelled around the world, Deutschland 86 continues the story of reluctant Stasi agent Martin Rauch. DQ visits the set to find out why this spy thriller is more than a history lesson.

Deutschland 83, from American writer Anna Winger and her German husband Joerg, aired in 110 territories, winning an International Emmy for telling a relatively untold story through the prism of a spy thriller, with all the trappings of the era – from the music to the fashion – present and correct. It also launched Channel 4’s foreign-language streaming service Walter Presents, and became the UK’s highest-rating subtitled drama when it aired on its parent broadcaster in 2016.

Three years have passed since then, both in the real world and in that of the series. Deutschland 86 picks up the story of reluctant Stasi agent Martin Rauch (Jonas Nay) in the unlikely environs of an Angolan orphanage. It feels like scant reward for saving the world from nuclear disaster in 1983, but he has been banished there, far from his girlfriend and infant son, for the crime of blowing his cover. When his aunt, Lenora (Maria Schrader), herself tainted by his perceived blunder, arrives in West Africa to send him back into the field, he consents on the understanding that he can return home when he completes his mission.

“A lot of people are interested in Martin,” says Anna Winger. “His legend from 1983 has travelled, then people meet him and no one believes it’s him. He’s asking himself what kind of life he wants to live now that he can try to take control of his own destiny. He has to decide whether to live up to that reputation or escape it.”

“Falling in love, killing a man, being separated from his family for three years… These experiences have changed Martin a lot,” says Nay. “His motivation for the whole season is to get back home, meet his three-year-old son and start a new life.”

This is easier said than done, of course, when his assignment includes running with Libyan insurgents, terrorists in Paris and journeying to Cape Town, another divided city also caught between global superpowers. The fall of the Berlin Wall all but coincided with the collapse of Apartheid, the Wingers noted. Was there a connection?

It turned out that there was. East Germany supported Nelson Mandela and the ANC as fellow socialists, training the latter’s militant wing, the MK. West Germany, meanwhile, observed the UN boycott on trading with South Africa while trading arms with the Apartheid regime on the side. The ‘good guys’ were, it seems, on the wrong side of history.

Most peculiar of all was the prospect of the communist German Democratic Republic (GDR), increasingly distant from Moscow and running out of money, propping up an ailing regime by engaging in criminal capitalism. This need for hard currency, and a growing sense of panic, brought them into the world of illicit arms dealing, running drug trials for Western Big Pharma, even selling dissidents to and borrowing huge sums from West Germany.

“The theme of the season is that it all comes down to money,” says Anna. “The wall came down because they ran out of cash and Apartheid failed for the same reason. 1986 was getting darker in the GDR – the iceberg is on the horizon. There was an exhaustion setting in about the Cold War. People were done, they didn’t want it any more, and the same was true of Apartheid.”

D86 also tracks the green movement, given a huge if unfortunate boost by the Chernobyl nuclear disaster, and the growing AIDS crisis, while the so-called Summer of Anxiety, when terrorist attacks blighted Europe, unavoidably invokes present-day concerns over terrorism, albeit religiously rather than politically motivated these days.

Lest that all sounds a little heavy, the Wingers are keen to reiterate that D86 is above all a spy yarn. “Like D83, we built a timeline of events, created a backdrop of real history then set our characters free across it,” says Anna. “It’s an adventure, a spy story and coming-of-age story rather than a history lesson.”

Which makes it a little ironic that DQ is sitting in a room that feels a little like a lecture theatre. We’re in the former Stasi HQ in Berlin – now the Stasi Museum, a grey memorial to an unloved regime but doubling as GDR offices for the series. It’s the final week of a 100-day shoot split between Cape Town and Berlin, and the cast are demob happy in defiance of the oppressively brown surroundings, yet conscious of the legacy contained in the walls of the building.

“The power of this building…” muses Schrader. “You can recreate something on a soundstage but I think people felt the authenticity and attention to detail in the first season. I’m from the West, and this is a loaded place. Knowing what some of my colleagues went through, it was very different for them, but when I entered the building it took a lot of energy.”

Cape Town, meanwhile, proved the perfect location, with its abundance of mid-80s architecture and a surfeit of spectacular scenery allowing it to double for other settings including Johannesburg and Tripoli.

“There’s a huge variety of landscapes and possibilities here,” says Joerg, “although to our chagrin it’s become much more expensive because of all these productions, which is great for the local economy but annoying for us!”

Filming in South Africa was an eye-opening experience for some of the cast, who discovered alarming evidence of Apartheid’s baleful legacy. “People would call it economic problems,” says Schrader, grimacing. “But the economic war is a racist war in South Africa. It’s normal in a restaurant that all the guests are white and the staff are black.”

The new locations also created openings for new characters, many of them women, most notably Rose Seithathi (Florence Kasumba) and Brigitte Winkelmann (Lavinia Wilson). It all makes for a breath of fresh air after D83’s predominance of middle-aged white men in cheap suits.

“Brigitte is a symbol for all the Western 80s decadence you can imagine,” says Wilson, a German resident despite the name. “She’s the wife of a German diplomat in Cape Town and her official job is a dentist, then one day Martin shows up at her clinic… She has another job, of course – she’s an undercover agent for West Germany, a player with lots of attitude and a really good liar, which I am definitely not. She’s full of surprises.”

“Rose grew up with a mother working in a German Jewish household,” Kasumaba, who played an ally of King T’Challa in Marvel’s Black Panther, explains. “She’s a secret agent for the MK who has had to leave her family and country in the past because of her total commitment to the cause. Somewhere along there, she met Lenora and they became a team: they fight together, and Rose needs Lenora’s contacts.”

Nay is thrilled to be back in a series that paved the way for Sky Atlantic’s Babylon Berlin, Netflix’s Dark and the rebooted Das Boot in a genuine renaissance for German television.

“Everybody’s excited,” he grins. “We’re telling the stories we want to tell. We’re late starters in Germany in getting series sold abroad, but we have high-end drama coming now. We were good at art-house cinema, sometimes a miniseries or TV film, but now doors are opening for serials.”

Back in 2015, the Wingers spoke of their concern that D83 would prove an unorthodox fit for RTL, the German broadcaster and coproducer better known for procedurals and gameshows. Domestic viewing figures were indeed disappointing, and so an amicable parting of the ways became almost inevitable. “We were given freedom to make the show we wanted to make, but it wasn’t the right show for them or their audience. There’s no animosity there,” Anna says.

RTL parent company Fremantle and coproducer UFA Fiction took the show to Amazon Prime, which, attracted by the drama’s international performance and binge-worthy qualities, provided a budget boost to reflect the story’s global remit and extended length, running as it does at 10 rather than eight episodes. Amazon has also committed to a third season, making the Wingers’ dream of completing the trilogy in 1989 a reality.

D86 launches in the UK tonight on More4, with the whole season available on Walter Presents after transmission of the first episode.

“Viewers now don’t care so much about where a series is from,” says Joerg, considering the show’s international success. “They want to be surprised; they’re looking for original material. We’re telling our story in a familiar way for international audiences. The whole grammar and dramaturgy of the show is in line with that. We didn’t strategically plan an international hit. Our goal from the very beginning was to make a show we would love, and if you’re really interested in something, that enthusiasm communicates somehow.”

Said enthusiasm is expressed most effectively, once again, through the diligent, affectionate recreation of the era. “Our make-up artists always said we tell the main story with the characters and we tell the 80s with the extras, who get the big hair and crazy stuff,” laughs Wilson.

Alongside the story, D83 stood out most for its use of music. This year there will be songs from everyone from metal legends Megadeth to synth-pop duo Pet Shop Boys and, perhaps inevitably for a show set in part in Apartheid South Africa, Paul Simon’s Graceland. Nay confides, laughing, that he has once again been lobbying for the inclusion his favourite band, The Police, whose final studio album was released back in 1983. But while he was disappointed at this omission, his passion for the new season is undiminished.

“Having two more episodes than for D83 means more characters and more layers,” he says. “Season one was following Martin; now it’s more an ensemble thing. We had to make up a vision for the first one. Now it feels bigger, and the more I saw, the more interested I got, which I think will be the same for the viewer.”