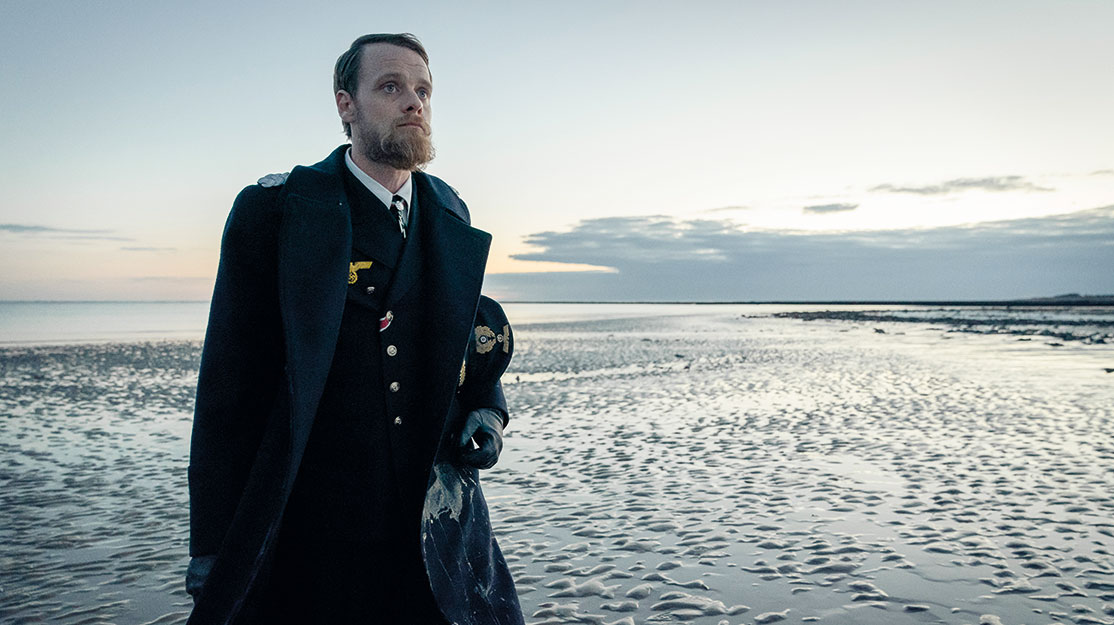 Back in deep water

On a British beach that’s doubling for the US coast during the Second World War, DQ hits the sand to watch filming for the second season of Das Boot.

On the sands of Formby beach, north of Liverpool on England’s north-west coast, the view stretches for miles across the Irish sea. But on this sunny spring day, the panorama is punctuated by the sight of eight men bobbing in the water.

A cameraman and a boom operator wade out into the sea to join them, stopping when the waves lap at their knees. Then, when preparations are set and the director calls action, the men – German submariners in military uniform – pull themselves on to their feet and run towards the shore. Once on the beach, they stop only when they reach the large dunes that run parallel to the coastline.

The actors are immediately wrapped in towels to stem the cold, although their costumes hide the layers of neoprene used to insulate them from the chilly water. Once they have caught their breath, they head back into the water for another take.

Further down the beach, large tents house the catering and costume areas and provide some respite from the windy conditions for the cast and crew of German wartime drama Das Boot, which is filming scenes for its second season. Quite how the U-boat crew ended up in the water is being kept secret, although it’s part of a plot that sees U-822 sent to the US to transport three saboteurs.

This is one of three dramatic storylines that make up the action of season two and aim to reveal how the human soul can become twisted by war. The action resumes in December 1942, six weeks after the conclusion of season one, when U-boat ace Johannes von Reinhartz (Clemens Schick) is handed a new secret mission, to carry the saboteurs to the US on board U-822. When his loyalty is questioned, U-612 (the vessel from season one) and its commanding officer Wrangel (Stefan Konarske) is sent in pursuit.

Meanwhile, having escaped certain death out on the Atlantic, former U-612 CO Klaus Hoffmann (Rick Okon) finds shelter in New York with Sam Greenwood (Vincent Kartheiser), who owes his life to Hoffmann. There he meets sleazy German-born lawyer Berger (Thomas Kretschmann), but will Berger help Hoffmann to return home and clear his name?

Back in La Rochelle, France, Simone (Vicky Krieps) and her roommate Margot (Fleur Geffrier) battle to secure an escape route for a Jewish family, but Forster (Tom Wlaschiha), head of the Gestapo, is watching their every move.

With Formby beach doubling for the Maine coastline, a large 1940s diner called The Bay has also been constructed on the other side of the sand dune and tall grass. Inside, menus advertise eggs any style for 10¢, franks and beans at 25¢ and the intriguing Tropical Hut Special for 50¢.

A long bar runs the length of the building, with booths opposite, each with a view of the sandy surroundings. Postcards for sale stand in a rack in front of a wall-mounted map of Maine, the ‘Pine Tree State.’ The cast and crew also filmed in Prague, La Rochelle and Malta, with another English city, Manchester, standing in for New York.

On the beach, Okon is watching his co-stars rush in and out of the water and taking part in a game of frisbee while wearing full costume. “It’s great to be back on set and shooting in the UK,” he says. “My story in season two takes place in the US, especially in New York. I think that’s all I can say!”

Season one saw Hoffmann bring Kartheiser’s Sam aboard U-612, much to the dismay of his crew, who later mutiny against him. Then, after apparently being left to die in the Atlantic, Hoffman inexplicably arrives at Sam’s New York office. “I helped him, and now he’s trying to help me,” Okon says of his character’s relationship with Sam. “And I help him again with some stuff he has going on. So it’s a hand-in-hand relationship. Hoffmann is in New York trying to figure things out and deciding what he’s going to do next. That’s basically his story.”

From the outset, Okon says he was immediately drawn to playing Hoffmann, an honourable but intense and inexperienced U-boat captain who is under pressure to keep his crew in line, and found himself delving into the history books once he was cast. A spell at boot camp and support from a naval advisor also helped to shape his performance.

However, nothing could quite prepare him for filming scenes onboard a submarine. “The real feeling to be underwater in a submarine is like being in a cage,” he says. “I don’t think we can imagine how it really felt for these people in the Second World War being underwater in a submarine. But it was claustrophobic. Sometimes we had 20 or 25 people in a very tiny place, but of course, we had the opportunity to step out and get some fresh air.”

Das Boot, inspired by both Lothar-Günther Buchheim’s 1973 novel and Wolfgang Petersen’s iconic 1981 film, proved to be a massive hit for Sky Deutschland when it debuted in 2018, going on to air in more than 100 countries around the world. Shows in their second seasons tend to return bigger and more ambitious, and Das Boot is no exception, with additional storylines, new characters and an extra U-boat all jostling for screen time. Bavaria Fiction and Sky Deutschland coproduce, with NBCUniversal Global Distribution handling international rights.

“The way the show goes forward is by ending with the end of the Second World War, naturally,” says Marcus Ammon, Sky Deutschland’s director of original production. “But we asked ourselves whether we wanted to continue with a story we established in season one and go on with the characters.

“We felt from the reaction of the audience that many of these characters became very popular. They fell in love with Vicky Krieps, playing Simone Strasser, and with our U-boat captain Klaus Hoffmann. These were clear signs for us to continue the story and add some new characters.”

But while the production team was, understandably, keen to honour the show’s source material and its reverential place in German culture in season one, did the first run’s success embolden them to take more risks this time around?

“We are bolder in season two, whether that’s just because of the success or the natural progression from one season to the other,” explains Bavaria Fiction executive producer Moritz Polter. “It’s also that we now have to compare ourselves to ourselves. The first season we were compared to the film and the second season will be compared to the first season, so to justify a second season we need to take it a step further. If we don’t, why are we doing it?

“This is a character-driven series, rather than an action or plot-driven series, so we feel it made absolute sense to continue the story because we want to know how they evolve, what [events in] the first season did to them, how they are now changed and can cope with what they go through.”

“We gained a lot of self-confidence,” Ammon continues of Sky Deutschland. “It was our second original production after [period crime drama] Babylon Berlin, which was a coproduction. This was our own thing. There was a lot of criticism in the beginning. ‘How can you possibly touch this huge brand, Das Boot? It will fail.’ There was a lot of stuff going on, and then it became this big success for us.

“Of course, that gives you some self-confidence that you’ve done the right thing, you’ve done something your audience loves and that was enough reason for us to keep going.”

Season one wasn’t even completed when Matthias Glasner (Blochin) was approached to direct season two alongside Rick Ostermann (Wolfskinder), taking over from Andreas Prochaska (Freud) who steered the first run.

“I was afraid if people hated season one they wouldn’t come back for season two, but I liked it, so I thought if I liked it, others will too,” says Glasner, who is also on writing duties alongside head writer Colin Teevan, Tim Loane and Laura Grace. “It was a relief when the first season was a success and people accepted it as a follow-up to Das Boot [the film].

“You want the whole thing to feel real, which is not always the case in Germany, so that impressed me. We will take that to the second season, so we will not have artificial lighting, artificial camera movements or have the actors playing over the top. We want to keep it real. It will be darker, because the war gets darker and darker and more and more people die. It’s the progression of the war and the natural progression of the show. The dark subtext of humanity is coming out in strange ways, so that’s where the show is heading to.”

Of the new characters, Schick (Casino Royale) joins the cast as renowned U-boat captain Johannes von Reinhartz, who has begun to doubt the war effort. When he is assigned to drop a ‘cargo’ of three SS men in America, he decides to defect, but his plans are discovered and Wrangel is sent after him, leading to a high-stakes race in which one captain tries to outsmart the other.

In the US, jazz singer Cassandra Lloyd (Rochelle Neil) is introduced as a member of the house band at real-life New York club Minton’s. Described as beautiful, self-possessed, confident and determined, she senses Sam is in love with her. But when she meets Hoffmann, she is instantly attracted to him. As their unlikely love story unfolds, Cassandra is unaware of Hoffmann’s true identity but slowly begins to learn the truth.

The introduction of Schick and Cassandra, plus seedy lawyer Berger, helped to shape the themes of the season, which deals with the loss of humanity and how characters are redefined by their actions.

“The war is an external influence, rather than an internal drive,” adds Polter. “What becomes more apparent and what is part of the second season is what is happening to the Jews and what Germany is capable of. That is very important because it puts our characters into the situation of actually understanding what they are fighting for.

“A lot of the people in the military didn’t know what was going on around them in that point. They were ‘fighting the good fight’ and once you understood the good fight was not a good fight – you were shooting down merchant ships and if there were civilians, you had to let them die, or what happened to the Jews who were being transported – that changed the perspective. How do you react to what is happening, and do you follow your orders? Those questions will be in the second season.”

For the characters of Das Boot, the horrors of war will truly be brought home, whether by land or sea.