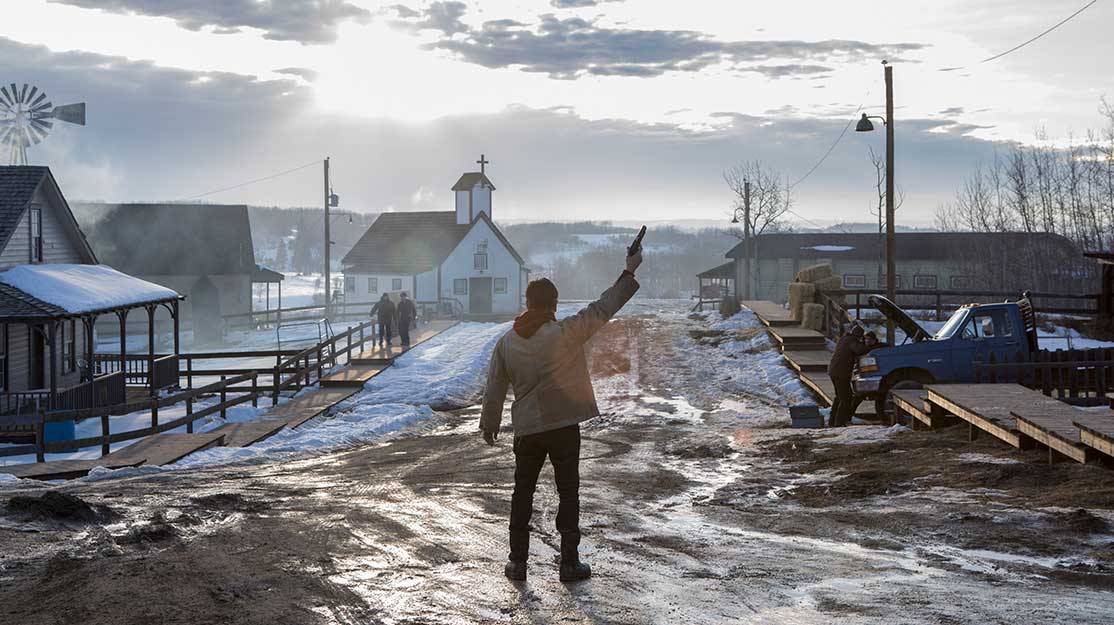 Back from the dead

Tim Roth, Genevieve O’Reilly and Abigail Lawrie talk about returning for a second season of Tin Star, the Sky original drama packed full of twists and turns as a tortured police chief faces new threats in his battle to save his family and find forgiveness for his sins.

The return of Sky original drama Tin Star isn’t so much a second season as a continuation of the fall-out from the events of season one – and from the way it finished, that’s no bad thing.

The first season closed in classic ‘cut to black’ style, echoing the hotly debated finale of iconic gangster drama The Sopranos, with the audience left in the dark as to the fate of the series’ lead character. But while viewers will never know whether Tony Soprano (played by James Gandolfini) escaped the HBO drama’s final instalment alive, the survival of Jim Devlin (Tim Roth) is more assured.

With Jim last seen lying in the snow-covered wilderness of the Rockies with a gunshot wound in his chest courtesy of his daughter, Anna (Abigail Lawrie), season two begins at that exact moment. His family, torn apart by the chaos that followed Jim and his alter-ego Jack in season one, is now more divided than ever.

Seeking refuge from her own parents, Anna is taken in by the God-fearing Nickel family, headed up by Pastor Johan (John Lynch), his wife Sarah (Anamaria Marinca) and daughter Rosa (Jenessa Grant) and hidden with the Ammonites – a religious community close to the central fictional town of Little Big Bear.

However, the peaceful prairie family are harbouring secrets of their own, and it’s not long before Anna is forced to seek her father’s help as an altogether more hellish threat emerges during the 10-episode season. If Jim is to find a way to save his family and atone for his sins, he must form an uneasy alliance.

The first season averaged 1.7 million viewers per episode for Sky Atlantic, making it one of the channel’s best performing originals. More than 16 million downloads and views virtually guaranteed a second run would be commissioned, with the new episodes filmed last year in Calgary, Canada. The series comes from producer Kudos (Humans, Broadchurch) and is distributed by Endemol Shine International and Sky Vision.

“I was really excited to see what they were going to do,” says Genevieve O’Reilly, who plays Jim’s wife and Anna’s mother, Angela Worth. “It ended so explosively; it was really exciting to see if Tim was going to live.”

Turning to Lawrie, Roth jokes: “I think your aim was off. I thought you would have been a better shot.”

Lawrie responds: “It was a bit low. Well, you didn’t die so it must have been quite off.”

Off screen at least, the Worth family have been reunited ahead of the launch of the second season in the UK tomorrow, and it’s easy to see their ease in each other’s company, having now completed 20 episodes of this slow-burning, often brutal and emotionally demanding drama from creator Rowan Joffe (Before I Go To Sleep, The American).

The show, which launched in 2017, introduced Reservoir Dogs star Roth as former London copper Jim Worth, who has upped sticks along with his family to escape a troubled past by beginning a new life in the Rocky Mountains.

Initially, everything was well, with the new police chief – a former alcoholic – enjoying more time catching fish than criminals in Little Big Bear. But the arrival of a shady oil company, led by Mad Men star Christina Hendricks as Elizabeth Bradshaw, coincides with a past that refuses to fade away, and an attack on his family turns Jim into a one-man wrecking ball on a quest for revenge.

With the chaos that erupted as a result of Jim’s pursuit of justice, events don’t look like toning down this season. Lawrie explains: “At the beginning, they’re all split. Anna needs to get away from her parents. She needs some little bit of stability, some security, and for a time she finds that in the Nickel family, where we find her. She just needs to figure out who her parents are, who she is, what she wants from them and what she wants from herself. She does need to be on her own for bit. But then she realises they’re family and they love each other and they can’t not be together.”

For Jim’s part, Roth says his character “loves his wife and his daughter. That’s just the fact of it, and that’s all.” He continues: “What was interesting, that we worked on, was he’s infinitely patient. He’ll just wait. And he’ll annoy the fuck out of you until you just have to come and talk to him. That’s a little bit of where his character is. He will wait, he’s not going anywhere. You’ll never get rid of him. Well, there is one way of doing it – but she missed!”

It’s a story that O’Reilly says is “really brave,” highlighting the ideas and ambition of the series. “It is as big as those mountains. Viewers, particularly who watched the first season, will feel immediately rewarded because of the decision to start off exactly where we finished,” she notes. “I think that will be really satisfying – it certainly was for us – to step back onto that mountain where we tried to kill each other and then have to start again. Where does it go from there? There’s great scope for drama and story within that.”

The cast reveal that on one episode in season one, there was a lot of improvisational work involved, and that has informed a lot of the approach to season two. “They had a concept and then we started to play,” Roth says, noting the freedom he and his fellow actors enjoyed on set. “There were certain [plot] points during the season we had to hit, but we could be very flexible with that. The scripts changed a lot.

“A lot of it was thinking, ‘If this happened to your character, how would your character react? What would they say? What wouldn’t they say?’ That’s something we worked on together as actors as much as possible. Some of the cast don’t like to improvise; they like a much more nailed-down version, so you provide that as best you can. We, as a family, got to be very flexible.”

Lawrie says there was a different approach throughout filming, but because scripts were delivered as filming progressed, “it made everything quite real. It was very immediate, all of our reactions, because we didn’t know what was coming next. I think that helped a lot.”

Roth adds: “I liked it. It was stressful but I embraced the challenge of it. I kind of enjoyed that and it had a chaos to it that I think the family have as well – a wildness. It’s a process that suits the family in a way.”

Returning to Calgary for the shoot, which was completed last August, felt like returning to family, O’Reilly states, describing the “beautiful team of people” the producers put together to make the show.

“They worked so hard, in extraordinary conditions,” she explains. “When we started there, there were times when filming was halted because it was too cold. By the time we were finished, we were stood down for three days because of bush fires. The extremes of weather were quite extraordinary. We were really cold, like properly cold – no acting involved. We all had slurred speech because we were so cold.”

O’Reilly, whose credits include Glitch and The Secret, also compliments the “great bunch of directors” who worked on season two, adding that they each brought fresh creativity and ideas to the set. Those behind the camera this season include Gilles Bannier, Chris Baugh, Jim Loach, Susan Tully and Justin Chadwick.

“Film and television, it’s a collaborative medium. You have engaging, collaborative, creative discussions with your director always, and we had wonderful directors on this. They were so invested in the piece and invested in us as actors but also as characters and the piece itself,” she says.

As for what viewers can expect, Roth points to Jim’s inevitable confrontation with Pastor Johan, which also marks the first time the actor has worked on screen with his longtime friend Lynch. “Expect trouble,” Roth teases. “I don’t think my character buys into the whole heaven and hell situation too easily.”