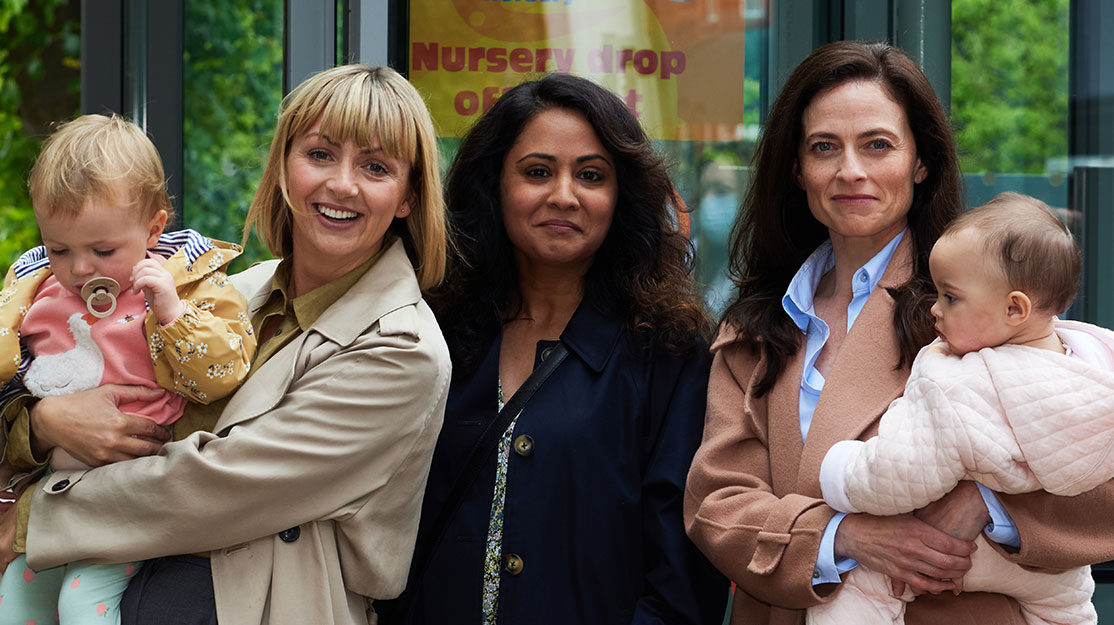 Maternal writer Jacqui Honess-Martin and star Lisa McGrillis reveal how reality met fiction when making this six-part drama about three working mothers returning to their hospital jobs after having children.

It was once the home of Pilkington, where the world’s strongest and most innovative glass products were made. But last summer, the enormous complex at Alexandra Park, in the Merseyside town of St Helens, housed the set of a drama called Maternal that may well shatter perceptions of whether women can have it all.

The combination of work and motherhood is an issue can dominate public discourse and produce hilarious comedy such as Motherland, but drama has been slow to catch up – until now.

The brainchild of playwright Jacqui Honess-Martin in her first television project, Maternal was born from the idea of her wanting to see her own experience as a mother returning to the workplace reflected in drama.

“When I went back to work when my son was six months old, I was tired, grumpy and really struggling – and I work in the theatre, which is a warm and relatively caring space,” says Honess-Martin, who now has two children, speaking on the show’s set. “It made me think about some of my mates who were going back into front-line medicine.

“I was interested in how we juxtapose the challenges of working in the NHS with the difficulties and sometimes hilarious trials of having small children. I hadn’t seen my own experience of being a working mum reflected on television; women are usually portrayed as either professional or in the domestic sphere, but the majority of us are doing both, and it is funny and awful and wonderful all at the same time.”

The six-part drama, which is produced by ITV Studios and begins today on ITV1 and streamer ITVX, stars Lara Pulver, Parminder Nagra and Lisa McGrillis as three doctors, all working in different specialisms, who are returning to work at the same hospital at the same time after having time off to have children.

All three have different circumstances: Pulver (The Split) is ambitious surgeon Catherine MacDiarmid, the single mum of a nine-month-old with childcare issues, who is determined not to let motherhood get in the way of becoming a consultant; Nagra – who first found fame in ER and also starred in last year’s DI Ray – is paediatric consultant Dr Maryam Afridi, who has been off for two years and whose teacher husband isn’t sure she will cope with being back; and McGrillis (Mum) is Dr Helen Cavendish, a registrar in acute medicine who is returning after three children. She is married to a fellow doctor who is now her senior and who had an affair with a junior in the department in which they both work.

The Pilkington building smacks of 1970s hospitals, and an entire ward has been built on one of its floors. Even the (real) canteen in the building is used for a set, with rubbish artfully strewn across the tables.

Honess-Martin says she obsessively watched ER as she was writing the series, but while Maternal will feature many medical scenes, its focus is on the lives of the three women.

“We are trying to do something different in terms of the balance of emotional tones,” she says. “There is a lot of darkness but also a lot of comedy. We are really getting under the skin of these women and their domestic lives. While ER had 30 seconds at the beginning and 30 seconds at the end of them at home, in some of my episodes it’s 50-50.

“What that means, hopefully, is that when you see those doctors in those big crash situations – in those big ‘ER moments’ – it feels extra terrifying because you know how tired they are, or how sad they are, or what else they are carrying into that room.”

All three actors are mothers themselves, and the set is a deliberately inclusive environment where cast and crew are allowed to bring in their children as long as they are accompanied by a childminder. McGrillis went one step further, asking if her real-life 18-month-old daughter could play her screen daughter.

“When I read this script I thought, ‘This is me, basically’,” she says. “I’m just playing a version of myself, which is really kind of exposing in a lot of ways. I can relate to it so much.

“I volunteered Cleo once I read that Helen has a one-and-a-half-year-old. It is interesting because they are at an age where they can be really clingy, and the downside of having her working with me was I’d be thinking, ‘She’s missed her nap’ or ‘She needs a snack’ when normally, if you were working with a baby, you’d pass them back to their mother.

“But she was great, so confident. She’s walking around going ‘Hiya!’ to everyone and her reactions were good. She puts her arms out and says ‘Mummy’ and that is going to look real.”

But it wasn’t all plain sailing. “There is a scene where I am rocking her to sleep, giving her milk and singing a lullaby,” recalls McGrillis. “It was the end of a long day and she was really tired and started to play up. She was crying and didn’t want me to hold her, and then you’ve got the whole crew watching you parenting as you are thinking, ‘Just drink the milk!’ If it had been another baby, I couldn’t have settled her, but because it was Cleo, I knew what to do and she calmed down.

“Then my son Joshie ended up on set too. My parents were looking after him but my dad hurt his Achilles tendon. My childminder was with me in Liverpool, so I rang our producer who said, ‘We are making a show about women returning to work after having kids, and if we can’t support that then we’re not doing our job.’ So Joshie came up; he had one of the best days. He sat by one of the monitors, he was helping with the checks. He was convinced he was an extra because he walked past the camera; he was buzzing.”

Authenticity was also a keyword for the shoot, which was overseen by director James Griffiths. Real local nurses were used in the hospital scenes, and each of the key actors was paired with a specialist doctor who was with them on set and whose stories were often used in the script.

“I was dependent on a medical textbook and calling a friend who was rather busy working on a Covid ward,” recalls Honess-Martin. “But once we knew it was going ahead, we joined with our three amazing consultants. Not only were they incredibly generous with their real-life stories but, also, it turns out you can’t just sit with a medical textbook. I think there was a scene in the first episode where one of the doctors said, ‘That bit needs to change because, if you did that, you would kill them.’”

All the doctors are under strain at work, echoing the frightening reality of the current NHS crisis. The idea behind Maternal, which is distributed by ITV Studios, was always to set it in the semi-post-pandemic world we are in now, although even Honess-Martin may not have predicted just how bad things would be.

“I think it is impossible to write about the NHS without having a political standpoint,” she says. “We are looking at the NHS at a point in history where it is in trouble because Covid found the hairline fractures and turned them into canyons. It is not a heavily political show, but the personal is political.”