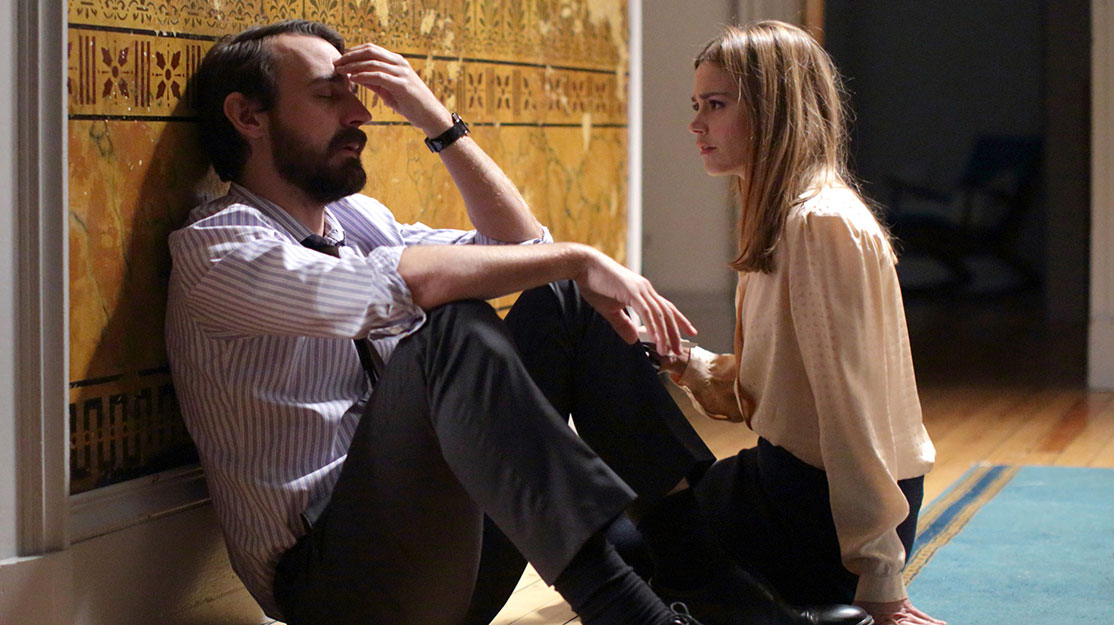 New parents Jenna Coleman and Ewen Leslie face unthinkable tragedy in four-part BBC psychological drama The Cry – but is all as it seems? Leslie, director Glendyn Ivin and executive producer Claire Mundell reveal the makings of this emotionally complex miniseries.

It all started with a book. Claire Mundell picked up the manuscript for Helen Fitzgerald’s novel The Cry long before it was published in 2013 and immediately recognised its potential to be transformed into a psychologically and emotionally gripping television series.

The story sees Joanna and husband Alistair travel with their newborn baby from Scotland to Australia to see Alistair’s mother Elizabeth and to fight for custody of Alistair’s daughter Chloe against his ex-wife Alexandra. But after they arrive down under, their lives are transformed when their baby goes missing.

Brimming with dilemmas, moral ambiguity and crimes that are relayed through a family setting, it also portrays the intense strain new parents face, with Joanna seemingly struggling with post-natal depression, exhaustion and loneliness while Alistair juggles the demands of his high-flying political career. Mundell was instantly hooked by the “compelling” story. “It takes us behind the scenes of an unthinkable situation and it allows you to vicariously experience how these characters react to it and try to manage the situation they’re in,” she says.

The project was in development with the BBC for several years until last July, when a four-part miniseries was given the greenlight with just one script in place. Now, just over 12 months later, The Cry is launching on BBC1 this Sunday. It will also air in Australia on the ABC, with DRG distributing the drama internationally.

Getting the series on air in such a short timeframe is an impressive achievement by the team behind the production. Not only did writer Jacquelin Perske need to complete the scripts, but producer Synchronicity Films needed to lay out exactly how it would tell this story, which is split between Glasgow in Scotland and Melbourne in Australia, factoring in things such as casting and location scouting down under – a country in which the company had never worked before.

Pre-production began in Australia at the start of 2018, with filming in Melbourne commencing in early February. Shooting shifted to Glasgow from the end of March before wrapping in May.

Executive producer Mundell and producer Brian Kaczynski had flirted with filming in South Africa to save time and money, while working in a country with a timezone much closer to the UK’s. But their desire for authenticity – Fitzgerald’s book was set in Melbourne – meant they pulled out all the stops and headed to Australia.

Their first trip last autumn involved scouting locations, meeting potential production partners and beginning their search for talent, both in front of and behind the camera. December Media came on board as a local partner and, once it was decided that the first leg of filming would take place in Melbourne, it then made sense to hire an Australian director and DOP to steer the project.

Recommended by Perske, director Glendyn Ivin was invited to join the production on the strength of his previous work, most notably SBS drama Safe Harbour. Mundell and Kaczynski watched the miniseries and subsequently picked up a three-for-one deal, with Ivin, his DOP Sam Chiplin and star Ewen Leslie all signing up for The Cry. “They were brilliant,” Mundell says. “Safe Harbour was a really compelling show told in a similar fractured timeline to ours. It had all the hallmarks of our show and it’s the quickest approval I’ve ever had from the BBC. I sent them an exert from that show and they were like, ‘Yes let’s have all three of them.’”

While on the surface Safe Harbour and The Cry are very different stories, Ivin says they are united by the morale ambiguity of their leading characters. In the first episode of The Cry, while you sympathise with Joanna and Alistair’s struggle to cope with their baby’s incessant crying, it’s never made clear whether they are good or bad people.

“What we had to find was where the story starts becoming a relationship drama about a couple with a new baby and where it starts teasing the audience and saying there’s something else going on here,” Ivin says. “It gets darker and more dramatic and it boils down to a scene at the end [of episode one] where Alistair and Joanna go into a supermarket. It’s a good sign a drama’s working when you can watch a couple walk up and down shopping aisles yet you’re not breathing at the same time.”

“The ambiguity of the characters is really interesting,” says Leslie, who plays Alistair. “There’s something with the characters that you can relate to, then all of a sudden they’ll do something or behave in a way that makes you go, ‘Wait, hold on a minute.’ That’s what was really interesting and fun about playing that. You hit bits in the script where you know people will not be on board with you. That can be scary or really empowering and you can play around with it a bit.”

Starring opposite Leslie is Jenna Coleman, best known for her role in Doctor Who and, more recently, for playing the lead in Victoria. Mundell says Coleman was her first choice to play Joanna due to her ability to elicit empathy from the audience and her appeal to a wide cross-section of viewers. “Principally it was the fact we wanted someone who could get to the depths this character needs to go to but still make us care for her and be empathetic,” she says. “We were totally thrilled when she said she wanted to do it.”

Leslie says of his co-star: “We’d never met or worked together before doing this and she was absolutely amazing. She was very good at finding the truth in every scene and also questioning a lot of things in a really great way. She was very supportive, really open and great to work with.”

In Leslie, The Cry found an actor who can play charming and intelligent but with a darkness bubbling beneath the surface. “You have to believe Joanna falls in love with this guy and it’s only gradually over time she begins to realise who he is beneath the charm,” Mundell teases. “Ewen has played that absolutely brilliantly, so much so the novelist herself said she couldn’t imagine anyone else playing that character.”

Aside from the time difference between Australia and the UK, which ranged from nine to 11 hours depending on daylight savings, Mundell says the biggest challenges of the project were differing working practices, Australia’s union system and a fluctuating exchange rate, with Australia proving more expensive than the UK.

“We took some Scottish heads of department out because it’s a four-parter and it’s important we have continuity creatively across those episodes, so we knew the HODs would be across both sides of the shoot,” she says. “We must have spent at least £1m in travel and accommodation alone, just because no one has invented a portal yet to travel between hemispheres. So the only way to do it was the long haul, and that is quite painful.”

Mundell says the first few weeks of shooting took the cast to some deeply emotional places, admitting to crying while watching a cut of episode two, even though she knew the script inside out. “It tells you something about the performances we got from our cast. They’re just extraordinary,” she says. “My passion is to tell stories like this that are thrillers but have depth and a relatability to them, in the sense that this is a domestic setting. It’s a scenario that could happen to anybody and therefore it’s very relatable.”

Across the four episodes, the plot unfolds across multiple timelines, jumping between past and present as it shows how Joanna and Alistair first meet, as well as into the future, where scenes tease Joanna facing an unruly mob as she is put on trial for an as-yet-unknown crime.

“There’s definitely a feeling through the series is that it’s a show that keeps its cards very close and then starts revealing them as the episodes go on,” Leslie says. “So you’re very aware when you’re doing a scene of what information you might have that certain other characters might not have and, on top of that, information that the characters have that the audience doesn’t have.

“The other thing here is, as a father, it’s an unthinkable scenario and absolutely horrifying. But wailing and falling apart for four hours is going to be unwatchable. You’ve got to walk a delicate line and find a balance within that grief and give a lot of variation.”

Ivin admits there’s a fine line between intrigue and confusion, so was careful not to splinter the storytelling too haphazardly, with match cuts often linking two different timeframes. That being said, playing scenes out of order means viewers can immediately sense something will happen later in the story, driving up the tension until those events unfold.

“I really enjoyed that process,” Ivin says. “The editing was taking a pretty complex jigsaw, pulling it apart and finding a different way for all those pieces to come together. It’s still the same story, but from script to the way we shot it to the way it’s being presented, we’re telling the same story but in a very different order. But it’s an order that is based around keeping an audience intrigued. Each scene tightens the drama until the credits roll at the end.”

The Cry won’t be the last time Synchronicity Films pitches up in Australia to make a television drama, with plans already afoot to return to Oz. “We coined a phrase for it,” Mundell adds. “You’ve heard of Scandi noir, this is Scaussi noir – Scotland-Australia – and we tend to do a lot more of it.”