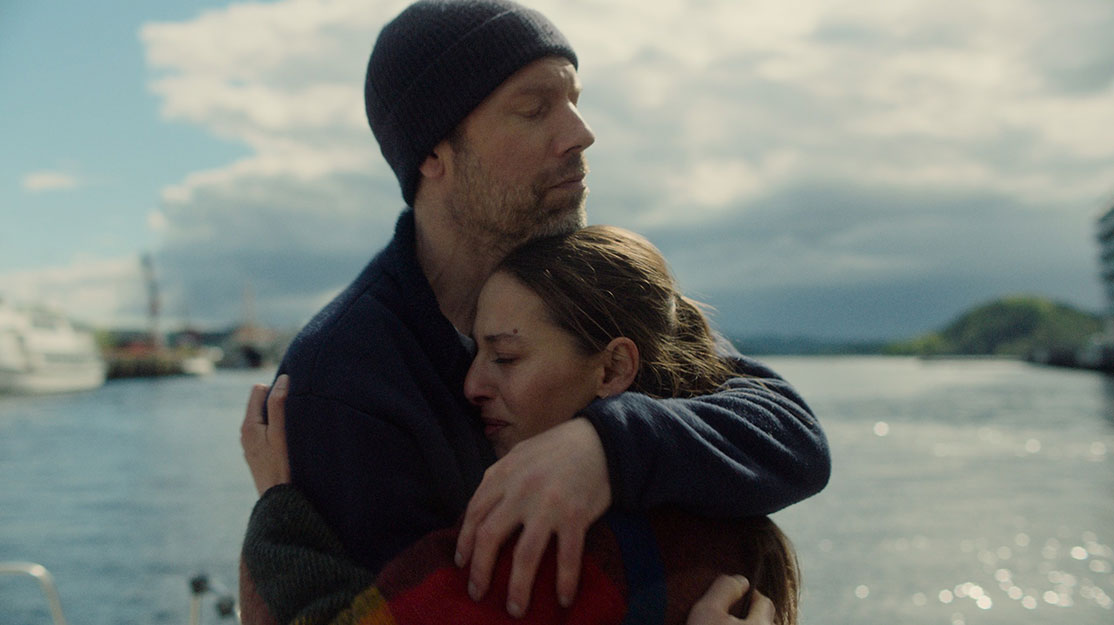 Star Pia Tjelta and the creative team behind Norwegian drama Made in Oslo discuss the conception and delivery of this fertility clinic-set series, which explores how far one woman is willing to go to become a mother.

Kathrine Valen Zeiner took on board the commonly prescribed advice to ‘write what you know’ when it came to creating Norwegian drama Made in Oslo.

Tackling topics such as fertility and reproduction, which are often considered taboo, in an emotional and nuanced way, the series reflects Zeiner’s own journey to becoming a parent, something rarely explored in TV drama.

“I’m married to a woman, so we needed help to become parents, and the experience of trying was so much more intense and hard than I had imagined,” she tells DQ. “It took a while, it became difficult and the intensity of emotions and the feeling of tunnel vision and borderline desperation was a bit frightening – but also, as a writer, very fascinating.”

Through her experiences, Zeiner also gained a sense of a particular corner of the medical industry. Moreover, “a lot of people don’t talk about being in this process; there’s a lot of shame connected to it, so there was the potential to tell a story that was heartfelt and intense but also relevant and important, and it all came together somehow,” Zeiner (Wisting) says.

“The story is unique and it’s made up, but what I took with me was a fascination for the whole industry and this medical field, as well as the emotions and mindset when you’re not getting what you want in this part of life.”

Made in Oslo introduces Elin, a doctor who runs a fertility clinic where she offers patients a chance to become parents. She is always empathetic and professional, but, more than anything, she longs for the chance to become a parent herself.

As her frustration grows, Elin becomes prepared to risk her relationships and careerto start her own family.

According to Zeiner, making Elin a doctor and clinic owner makes it easier for viewers to access the political and business aspects of the series, as well as showing the character’s conflicting emotions as she helps people become parents while wanting the same for herself.

“That duality in her being both patient and doctor has been there all along and gave us access to everything we wanted to say,” she says, speaking at the Monte Carlo TV Festival where Made in Oslo was in competition.

Pia Tjelta (Norsemen), who stars as Elin, picks up: “It’s a genius thing Kathrine has done in her script to create a main character with such a big contrast within her. She’s both a doctor and a patient, and there is huge conflict within that.”

The actor says the decision to join the production was an easy one, pointing to both the chance to reunite with director Marit Moum Aune (with whom she worked on fellow Norwegian series Struggle for Life) and how she “immediately” connected with the material.

“The team was really good and I loved the scripts,” Tjelta says. “It’s set in a modern dream world, in a way. Kathrine was saying she found the character very annoying and difficult to like, but it’s important to me that we show life as life is and have that kind of authenticity. When we have a craving within us and explore the animal within us, that’s ugly. It’s not nice or polite, and it was important to me that we had the courage to tell a story with a female character who was allowed to be ugly.”

Production company Tordenfilm and producer Nina Figenschow boarded the project in 2017, by which time Zeiner had already been researching the story for a couple of years. Aune joined to direct two-and-a-half years later when the project was heading into pre-production, and before Tjelta and fellow stars Jakob Cedergren, Ola G Furuseth, Mariann Hole, Sara Khorami and Ane Skumsvoll were cast. British actor Tobias Menzies also appears as an ambitious and charming businessman.

“Marit had rehearsals where sometimes I was present, not really interacting that much but listening to their discussions and getting to know [the actors] a little bit so it was easier for them to contact me if they had ideas we could include in the script,” Zeiner says. “But the writing has been all me. I’ve worked in writers rooms as well, but this did come from a very personal place and it was really important to me. Because there was a very long  development period, it was possible for me to write the scripts myself, and that was a good process for me.”

That development process was extended further by the pandemic, but it meant the production was raring to go when filming finally started in late November 2020.

“With Marit, we invested a lot of time in prep to make sure we knew what to do. Marit was also the only director of the whole 92-day shoot. That’s a pretty big marathon,” says Figenschow. “The way series are made today, sometimes I question splitting it up too much. At least you can feel it’s the same tone through the series [when you stick with one director]. Often when you see series, you can feel it jumping into new directions. It was really important to me that it looked like one thing.”

After reading the scripts, Aune began work with DOP John-Erling Fredriksen to develop their plans for the Viaplay series. Key to its look is the use of the “seeking camera” technique: the majority of the footage would be captured by Fredriksen carrying the camera across the set on his shoulder, with the actors never knowing for certain whether they were in shot as they played out a scene.

“Then the trust of the actors, the photographer and me together becomes really important,” Aune explains. “In a lot of the scenes, we have a lot of long shots where the whole scene, all the blocking, is done without any editing, but also we have the camera going wherever the camera wants. That makes the actors less self-conscious, which is the enemy of a good actor. ‘Am I in the picture now or not?’ – that’s a question we didn’t have. For me, all acting is reacting. So if you are not involved, if you’re not invested, it’s a shambles. The style of the series is based on a very personal camera.”

Tjelta describes the practice as a “free and dynamic way of working,” adding: “I do love working that way because it’s very organic. It gives us a lot of freedom and the opportunity to let scenes evolve within a day. Maybe you start and think this is the right way to go and then you’re allowed to go, ‘No, this is wrong. Let’s go in the complete other direction.’ You have the flexibility – and also our DOP is like a ninja.”

The actor’s preparation to play Elin involved researching the work of a fertility clinic and, more importantly, learning how to act like a doctor and handle medical equipment as naturally as possible.

“A big part of the job was the physical journey. It’s probably surprising for someone who isn’t in my occupation,” Tjelta says. “The emotional part of it was fairly easy for me because it’s all in the situation and not necessarily in the script. Every time I get a script and it says the character cries, I take it away. Every time a writer puts an emotion into the situation, I take away all the words that describe how the actor should feel because I want that to be open and not to have any preconceived ideas.

As well as delaying filming, Covid-19 resulted in Norwegian regulations that led to a “sweaty” period trying to get Danish actor Cedergren (Morden I Sandhamn) back into the country after a Christmas break. Notably, Menzies (The Crown) spent eight days in quarantine in an apartment in Oslo in order to complete a five-day shooting schedule. He would secretly meet Aune in a nearby park to discuss plans for the series.

The pandemic also affected the production’s ambitions to make every aspect as environmentally friendly as possible. “Made in Oslo has a very green and sustainable concept. It’s the basis of the production – shooting [locally] and taking sustainable choices everywhere we can,” Figenschow says.

“But the pandemic challenged that in a negative sense. We couldn’t sit together in cars, we couldn’t go by public transport as we planned. Also, we would normally have a buffet and sit together for lunch, [but Covid rules meant] it was one plastic box per person. But we really managed well with a sustainable concept. We still have a lot of work to do to get our film and TV industry to be more green. Being local is one of our main aims, as long as the story allows that.”

Unusually, Made in Oslo came out just a few weeks before another Scandinavian series set in a fertility clinic, debuting on Viaplay in April ahead of Netflix’s Danish comedy-drama Skruk (Baby Fever) in June.

“If you see in society how many people deal with these topics in their private lives, it’s strange there’s not more about it,” Figenschow notes. “It’s a subject that is really relevant, and countries across Europe and all over the world deal with this. That’s also something we’ve seen during the course of this production, that people feel it’s personal to them. It’s more and more relevant to people trying to establish families.”

Like Skruk, Made in Oslo is also likely to find a wide audience thanks to the enduring international interest in Nordic series, with Viaplay Content Sales and Federation sharing distribution duties.

“From what we hear from Norwegian audiences, this is a little bit different,” Aune says of the series. “There aren’t that many pure drama series. There’s a lot of comedy-dramas, crime and thrillers. That’s what separates us.”

Figenschow adds: “A few years back, we had a crime and thriller boom coming from Nordic countries through Nordic noir. With [Tordenfilm-produced] Valkyrien, we tried to go beyond Nordic noir to push our storytelling a little bit. We try to do it our way and not copy and paste old successes. We try to stick very closely to original storytelling in our own way and be true to our hearts and what we’re passionate about. Made in Oslo differs a little bit from other productions. The storytelling has a little bit more guts.”