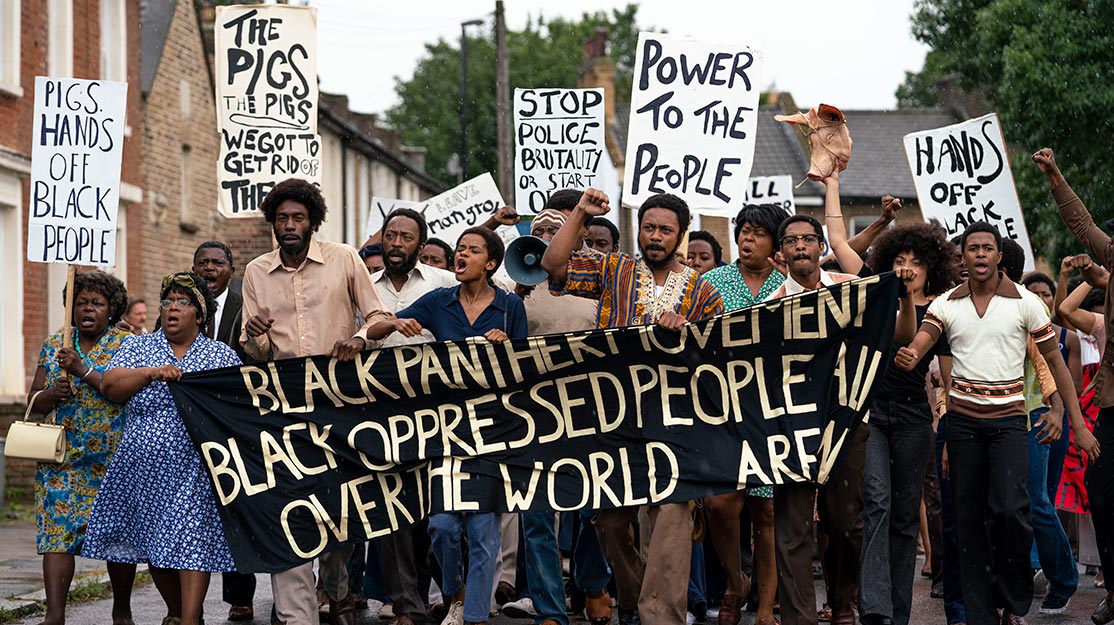 12 Years a Slave director Steve McQueen comes to the small screen for the first time with Small Axe, a series of feature-length TV films focusing on London’s West Indian community. He reveals how the long-gestating project took shape and explains how these historical stories look to the future.

As the Oscar- and Bafta-winning director behind critically acclaimed movies including 12 Years a Slave and Shame, Steve McQueen is one of the UK’s most celebrated filmmakers.

Now, McQueen’s first television project is about to hit screens – but this isn’t simply the latest example of a Hollywood director making the move to TV drama now that the medium comes with more kudos. Eleven years in the making, Small Axe has been in development for almost the entirety of McQueen’s feature film career, which began with 2008’s Hunger.

Debuting on BBC1 and BBC iPlayer in the UK this Sunday ahead of a November 20 release on Amazon Prime Video in the US, Small Axe comprises five separate feature-length instalments, each focusing on the experiences of London’s West Indian community.

All five films have been directed by McQueen, who wrote them alongside Courttia Newland and Alastair Siddons. The anthology series takes its name from the African proverb, ‘If you are the big tree, we are the small axe,’ which was popularised by a 1973 Bob Marley song also called Small Axe.

Set between the late 1960s and mid-1980s, Small Axe focuses on a community “whose lives have been shaped by their own force of will, despite rampant racism and discrimination,” according to the BBC. But while a series touching on these themes is certainly timely – coming in a year that has seen the Black Lives Matter movement spread around the world following the death of George Floyd at the hands of Minneapolis Police – McQueen says this wasn’t deliberate.

Asked why Small Axe is coming to the screen now, he responds: “Because we made it happen, that’s why. It wasn’t a miracle; it wasn’t a gift from the heavens. It was a lot of effort to get these stories out. I’m grateful to the BBC because they’ve supported this process for 11 years. It’s been amazing. There’s been a lot of support for this, and I think now’s the time.”

Having dedicated Small Axe “to George Floyd and all the other black people that have been murdered, seen or unseen, because of who they are” back in June when two of the films –Mangrove and Lovers Rock – were selected for the Cannes Film Festival, the director also sees relevance in the fact that the coronavirus has had a disproportionate impact on black people.

“So much has happened this year,” he says. “Firstly, of course, George Floyd, and then we have the situation with Covid-19 and what has happened with black people during the pandemic, with the large proportion of black people suffering and dying.

“I feel we’ve been very fortunate that it’s been put out right now but, at the same time, it’s one of those things where it could have happened at any time. I don’t know when there was a right or wrong time for it, I’m just happy that it exists.”

In order of their premiere dates, Mangrove and Lovers Rock will launch first ahead of episodes called Red, White & Blue, Alex Wheatle and Education.

Starring Shaun Parkes (Netflix’s Lost in Space) and Black Panther’s Letitia Wright, Mangrove centres on real-life figure Frank Crichlow (Parkes), who opened the titular Caribbean restaurant in London’s Notting Hill in 1968. After a succession of seemingly racially motivated police raids on the restaurant prompts the local community to take to the streets in peaceful protest, nine people, including Frank and British Black Panther movement leader Altheia Jones-LeCointe (Wright), are arrested. The film then follows their trial for incitement to riot.

Next up is Lovers Rock, a music-oriented episode that acts as a love letter to the reggae subgenre. The film unfolds in a blues party being held in a London house in 1980, attended by black youth who were unwelcome in white nightclubs at the time. It focuses on a blossoming romance between Martha (newcomer Amarah-Jae St. Aubyn) and Franklyn (Top Boy’s Micheal Ward).

The third film is Red, White & Blue, which tells the true story of Leroy Logan, played by Star Wars actor John Boyega. In the early 1980s, Logan is working as a forensic scientist. But after his father is assaulted by two policemen, he finds himself driven to revisit his childhood dream of becoming a police officer, with the aim of changing racist attitudes from within – a seemingly impossible task in an institutionally racist Metropolitan Police.

Alex Wheatle is another true story, following award-winning writer Wheatle (Sheyi Cole) from a young boy through his early adult years. After spending his childhood in a mostly white care home, Alex finds a sense of community a passion for music and DJing when living in Brixton at the start of the 1980s. However, when he ends up in prison following the 1981 Brixton riot, Alex is forced to confront his past and find new direction in his life.

Finally, Education is a coming-of-age story about 12-year-old Kingsley (Kenyah Sandy), who finds himself sent to a special needs school after being deemed disruptive in class. With Kingsley’s parents distracted by working two jobs and unaware of the unofficial segregation policy preventing many black children from having the education they deserve, a group of West Indian women take matters into their own hands.

But while Small Axe was always destined for the Beeb, it took some time for the show’s format to take shape. When it was first announced back in January 2014, the project was teased as a “serious drama series in Britain with black people from all walks of life as the main protagonists.”

McQueen initially planned to make a more standard drama series with a single narrative, but later “realised these stories had to stand alone as original films, yet at the same time be part of a collective.”

“These are cinema; these are films that happen to be on TV,” McQueen says of the project’s final shape. Production was handled by EMU Films, Turbine Studios, Amazon Studios and BBC Studios, with the latter distributing. Writing Mangrove, Alex Wheatle and Education with Siddons and Lovers Rock and Red, White & Blue with Newland, McQueen also exec produces the show alongside Tracey Scoffield and David Tanner.

The decision to focus on the experience of West Indians in London means the stories act as a tribute to a community to which McQueen himself belongs, the London-born director being of Grenadian and Trinidadian descent.

“I grew up in paradise when I grew up in West London,” he says. “I grew up in a school that had every single nationality, and I didn’t know how special it was until I left school and grew older. I paid it no mind until I realised, ‘My goodness, what a wonderful experience I had.’

With music forming such a significant part of West Indian culture, it was inevitable that it would play a major role in Small Axe. The carefully selected soundtrack features many songs specifically chosen by McQueen and is also important to the plot of episodes such as Lovers Rock and Alex Wheatle.

Set almost entirely within the confines of a house party, Lovers Rock is comparable to a feature-length music video, with popular tunes of the era front and centre throughout. Some songs are heard in their entirety: Janet Kay’s Silly Games occupies almost 10 minutes of screen time as the revellers go into an extended a cappella jam after the record stops, while Kunta Kinte Dub by The Revolutionaries plays for six minutes, eliciting an energetic, almost primal response from the partygoers.

In the episode, the camera moves between the writhing bodies on the dancefloor, placing the viewer right in the middle of the party. It’s a feeling that McQueen himself also experienced while filming, describing a sense of being “invited” to the party.

“What was happening in front of the camera was happening behind the camera, because it reverberated throughout the crew,” he says. “It was absolutely amazing, and I was invited to the dance. As an artist, the ultimate situation is that you are invited, and that’s what we were. It was spiritual. That doesn’t happen every day.”

Like the meticulously researched hairstyling and costumes, Small Axe’s music helps give viewers a sense of time and place and really adds to the show’s immersive, time-capsule feel. But despite all the films being set more than three decades ago, McQueen is adamant Small Axe is very forward-looking, going as far as describing the anthology as sci-fi.

“For me, these films are like science-fiction movies. They tell us where we are now and how far we’ve come but, ultimately, how far we need to go. That’s always been the case with how I felt about Small Axe,” he says.

With its focus on racism and on the West Indian community thriving amid constantly challenging circumstances, Small Axe certainly touches on many difficult issues, telling stories of black British history that have previously gone largely untold. But McQueen never felt any sense of apprehension in bringing them to the screen.

“Nothing’s difficult once you’ve confronted your fear, and sometimes you have to confront your fear and jump in with two feet,” he says. “I learned at a certain point in my life that we’re all going to die anyway, so we might as well just go for it.